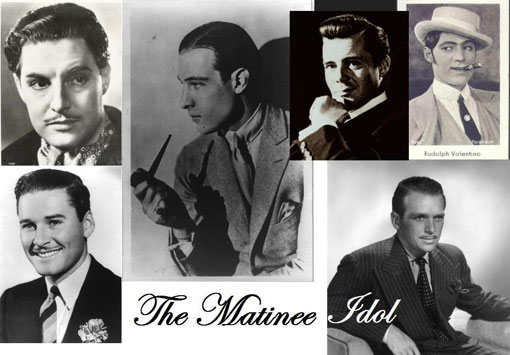 There was something rather special about the old matinee idol. Unlike the screen sex symbols of modern years, the idol inspired more than a little heat under the collar. They were objects of lust to be sure, but they were also something a little finer.

In Robert Altman’s 2001 film ‘Gosford Park’, Jeremy Northam, himself no slouch in the screen idolatry department, played one of the classic 1930s idols, Ivor Novello. One of the most memorable parts of the portrayal was Novello’s slightness of manner.

Apart from the troubadic interludes at the piano, the ‘Gosford Park’ Novello was a quiet and unassuming chap quite remote from the public image, the brashness of the billboard and the pomp of his music; he possessed a measured and universally pleasant manner.

Indeed some idols were quite the reverse of the noisy and showy characters they portrayed. Rudolph Valentino once remarked that women, despite many claims to the contrary, were not in love with him but with his picture on the screen; “I am merely the canvas on which women paint their dreams.”

This humility and private indignation with the sensationalism they caused was a rare quality of a matinee idol. Considered second rate in their quality as thespians by an envious theatrical fraternity, the idol was for many merely an extremely handsome clothes horse, a stylish but vitally empty creature of superficial whimsy.

Characters like Errol Flynn endorse such description, but Flynn was a rare beast in the world of Hollywood men being more inclined to the boisterous bonhomie than the boudoir whereas chaps like Dirk Bogarde retained their sense of mystery with their casual elegance. They captured the imagination of males and females alike; conjuring as much admiration for their chic as for their exotic good looks.

They were somewhere between a sportsman and a dandy in style; never allowing their mighty neon names to take their image into absurdity and yet still managing to live up to their cinematic presence with powerful panache. They never had the ornamentation or the affectation of stage and screen fops; they were clean cut, elegant and yet somehow simple.

Such attitude was reflected in their screen and stage personas and it was obvious, in the case of luminous leading men like Robert Donat, that their style was not part of an act but really a marketable part of who they were.

In many ways they were the cinematic muses: the marvellous and mesmeric men of celluloid, towering figures of the imagination, their timelessness and everlasting appeal displayed to magnificent effect and captured for all time on little reels of film.

Crucially, the one telling thing about the matinee idol was, that for all his supposed exoticism and ethereal splendour, he was frighteningly convincing as the Everyman. Richard Hannay may have been a fabulous and witty brick of a chap, but it was the honesty and goodness with which he was played by Donat that won the hearts of moviegoers.

The true magic of the movies was in taking something ordinary, something commonplace, and parading it in beauty and style; the matinee idol had an unmistakable and organic input in this process and that such idolization should continue off-screen was only to be expected. When something ordinary is done so very well, it is really rather a rare thing indeed; therein lies the secret of that unmistakable style.