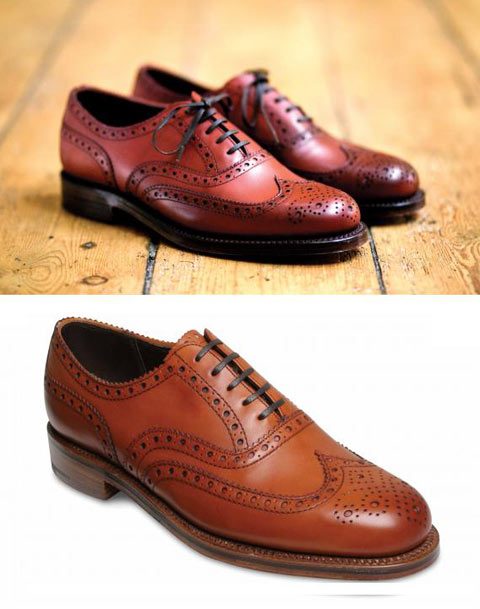 The internet has been a boon to independent retailers. While this is a positive thing, it’s not without its pitfalls, particularly when a retailer has no bricks and mortar retail unit to provide a sense of reassurance. Just who is at the other end of your monitor?

One of the things I like to do on Bespokeme is highlighting dependable online only retailers. This usually entails calling people up and interviewing them over the phone, and taking a punt and trying their website of course.

In the case of shoenet.co.uk this was an easier undertaking than most. It just so happens that the guy who sits behind me in the office, Edward, is also a part owner of the business.

It’s actually run by his uncle, and it wasn’t until we got talking (read drinking) that I discovered the family’s involvement with shoemaking goes back as far as 1898.

I doubt it’s a company you’ve heard of, but the owners of Shoenet are family firm Livingston & Doughty. Originally founded in Leicester in 1898 they started out supplying shoe components to England’s burgeoning shoemaking industry.

Today, they supply the cork filler, or Flexofil as it’s known in the trade, which is a key component in Goodyear Welted shoes. It’s the cork layer between the insole and the sole of the shoe that means the shoe not only moulds to your foot but it also act as an additional cushion, and barrier, between the foot and sole. They currently supply cork to most of England’s shoemakers, from Church’s, Joseph Cheaney, John Lobb and Crockett & Jones to Loake, Barker and Grenson. They also export their formula all over the world.

Shoenet isn’t the flashest retailing website out there, and a few more pictures of the shoes would be helpful, but it does offer a solid range of classic Goodyear Welted shoes at competitive prices. In particular, and what prompted me to use them, was the fact they sell the Grenson Rose collection.

I’m something of a fan of Grenson shoes, but curiously they come in for a bit of stick amongst the clothing chat forums. For the money I think they’re great value and are perfectly well made. But some of this antipathy stems from a confusion regarding whether they are made in England or aboard.

When this solid but uninspiring firm was taken over by City financier James Purslow in 2004, he set out to reinvigorate the brand. Bringing in London shoe designer Tim Little – who has had some success in his own right and recently bought the whole enterprise- they set about capturing a slightly younger market. Echoing the company’s traditional designs but incorporating subtle tweaks, these shoes have a modern edge. And it’s a strategy that’s worked. That range is the Rushton collection which can be found on the Grenson’s new retail website at around the £120-180 mark. It is these shoes which are made up in India. I don’t hold that against them, it’s an increasingly common feature of modern shoemaking when you aim for a price point of around £100-£180. You might find this excellent article on TheShoeSnob interesting reading.

However the more expensive Rose collection, which is the one I’m interested in, retails at around £225 and upwards. These shoes are most definitely made in Northampton, and it is from this collection that I recently took delivery of a beautiful pair of tan, double sole Albert brogues.

The shoes came with shoehorn and a spare pair of laces. The shipping charges are reasonable and they ship all over the world. In short, they’re a useful website with a solid history in shoemaking as guarantor.

It’s worth getting to know that guy who sits behind you in the office.