Vardon, Ray, Ouimet and The Greatest Game Ever Played 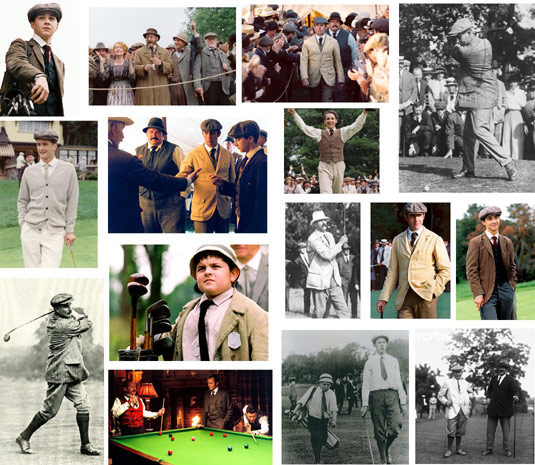 These days golfers aren’t known for their dress sense, and that isn’t likely to improve given the brown flared ensemble the US Ryder Cup teamed pitch up in this year. Lesson learned there I think: don’t let the skipper’s wife design the team’s kit. Anyways, golf did have its age of elegance.

Around the time of the Ryder Cup I happened to watch a gentle little flick entitled The Greatest Game Ever Played. Set around the US Open of 1913 and based on a true story, and book of the same title, it’s the tale of a poor American amateur golfer, Francis Ouimet, who against all odds beats British professionals the great Ted Ray and legendary Harry Vardon – still regarded as Britain’s greatest ever golfing champion.

It’s a nice little Sunday afternoon movie with a happy ending. But what makes it really worth watching is that fact that it is so beautifully styled. What’s on offer is an array of tweeds, cords and heavy cottons; club collared shirts; the layering of coloured, textured wool jackets and waistcoats mixed in with knitted ties. Although Vardon was an early pioneer of plus four trousers on the golf course, in 1913 most gentlemen still played in long trousers, which in my view makes the look a little more elegant than that of later years. And of course there is an abundance of Gatsby caps, an item which has made something of a comeback in London the last few winters. 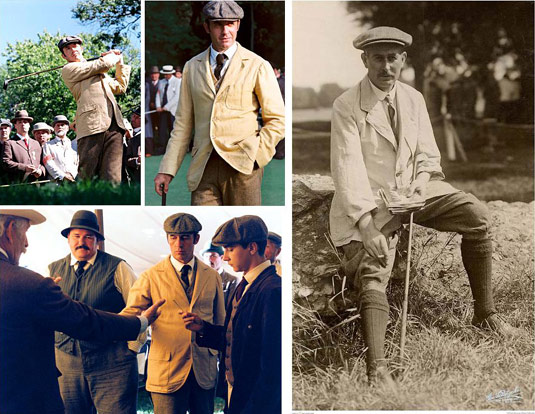 Particular details which caught my eye and got my brain wising were to be found on the garments worn by Harry Vardon, pictured above (movie shots and an original photo). These included that curve to the hem of the cotton Jacket, something I’ve been thinking about for a while and typical of the era; the unpadded soft shoulders; and most of all that corn yellow tan to the jacket. That colour in particular is one I’ve been hunting high and low for, in both a chino and an odd jacket. No one seems to quite get the right shade, either being too yellow or too khaki.

The problem with rooting through old photos is of course that they’re mostly in black and white. It’s great to see these clothes, cloths, styles and details given a little colour.