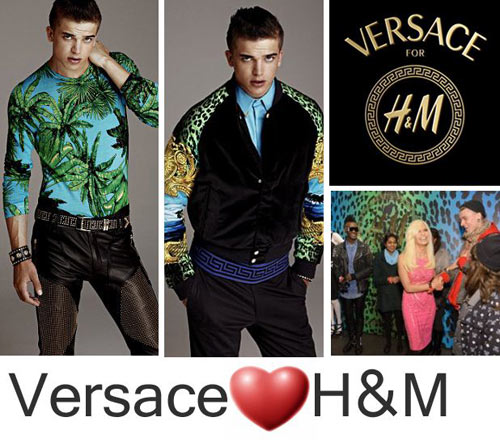 There was something rather sad about the way Donatella Versace introduced the latest designer collaboration with the high street giant H&M. Normally, these collaborations are mutually beneficial affairs; the Giant sprinkles a little designer magic on their wares and rubs their hands gleefully as the queues form around the block; the Designer stands by their side counting the cash from the brief marriage, monitoring the crowds of fashionistas paying homage to their spring-up temples.

This time, there was something peculiar about the Designer’s place at the party. Though, again, this collaboration appears to be an unmitigated financial success, the hints of desperation in Donatella Versace’s words, and the state of Versace itself, have dulled the effect of the magic. On a grey and gloomy day, the daughter of Gianni Versace stumbled into the London flagship of the world’s second mightiest clothing retailer and muttered lines about the “new generation” of people opening up to Versace, selling to “different markets” and, bizarrely, posing for pictures with patient shoppers and informal eBay retailers.

The men’s collection is typically extravagant and gloriously tasteless; you shouldn’t expect any less from Versace. Pink suits, Greek key, sunbursts, leopard print; it was Gianni Versace’s greatest hits. Though Versace may be satisfied that legions of men turned out for the London opening, they should be wary; this was not a sign of mass appeal. As well as the thousands who were sent to collect or help girlfriends and wives with the 10 minute hauls, many were eBay merchants looking to spin a profit on that most cherished condition of retail; ‘Sold Out.’ There were certainly likely to be male fans true to the aesthetic and experimental label enthusiasts willing to give it a go, but these were few and far between.

Versace is looking ever more like the loud drunk at the party who refuses to go home. It hasn’t changed its stripes – literally – and even Donatella herself made wistful references to the glory of the 1990s, when excess and Versace were riding a high wave. Re-introducing the masses to the sort of clobber that looks like the aesthetic visualisation of the fall of the Roman Empire is apposite and yet extremely ill-timed. It is true that a lot of people like to have their “little bit of designer”, something H&M uses to maximum effect. In fact, many people buy things they don’t even like, particularly when they only have 10 minutes to make up their mind. However, the only long term beneficiary can be the Giant, and not because associations with a cheap, high street brand affect the Designer’s standing in the rarefied world of high fashion, but because the frenzied joy on purchasing ‘designer’ wares is short lived, soon forgotten and often regretted.

The Daily Mail’s headline, “Donatella Versace greets desperate shoppers” was wrong. It was the other way around.