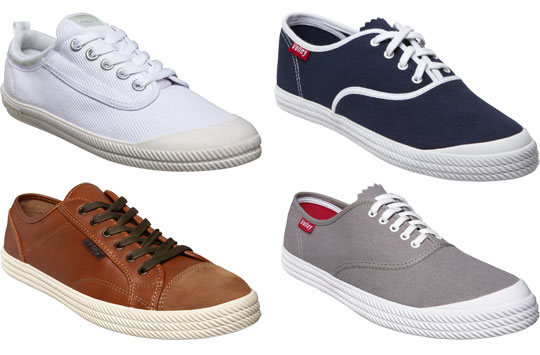 Volley is an Australian sneaker company born “down under” in 1936 and specializes in canvas and leather sneakers for athletes and those who want to add classic casual footwear to their collection.  Volley’s heritage lies in the pursuit of athletics with tennis players both men and women alike wearing their sneakers faithfully during the Wimbledon championships of the 60’s and 70’s.

For decades the low profile leather, canvas, and rubber shoes have only been available in Australia.  Not until recently have they been stocked in the US in LA and NYC at select Steven Alan and Urban Outfitter stores.  I have yet to see or hear anyone in my sartorial circles speak of these or wear them, so I thought it was the perfect time to introduce them.

Although dress shoes make up the majority of shoe collection, I do happen to own and wear several pairs of sneakers.  Jack Purcell’s, Converse All Stars, and Seavees have made up my casual footwear selections over the years.  I’ve been fortunate enough to add a pair of Volleys to the rotation and have been breaking them in over the last few months.

Volley’s come in several different lines from the classic canvas and rubber rope soled O.C., to the leather S.S, to the sporty International.   The classic line of the O.C caught my fancy.   The shoes are offered only in whole sizes.  I’ve tried and only moderately succeeded in the past with ordering shoes from outside the US.  Fortunately this is one of the few successes.  The 9’s run true to size and fit well although they were a bit snug on the toe at first.  I’d rather have it this way then too big in the heel which many shoes are due to my skinny heels.

These sneakers were a replacement for my Converse All Stars which were falling apart.  So far I can say that I believe my Volleys will actually hold up better than the Converse which are glued rather carelessly and crack at the crease point after several wears.  The Volley roped sole seems to be constructed better although both shoes are made in China.  The canvas is light and breathable.  The shoe strings are sturdy and flat with weighted silver aglets.  The only branding to be seen is the red Volley flag at the back of the heel which I don’t mind.  The gray and white combination is unassuming and functional.  They have married well with my linen five pocket pants and chinos in the summer and I imagine they will go just as well with my cords and denim in the fall.  At an attractive $80 a pair they can be easily replaced over the years as need be to keep one looking stylish and feeling comfortable all at once.