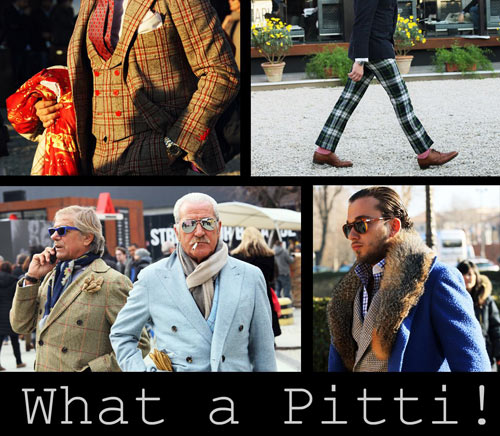 “Pitti Uomo” as the hackneyed phrase goes “is to menswear what Paris fashion week is to womenswear.” A bold statement, and not an untrue one; there is no doubt that the great (and the greatest) as well as the good of international menswear are all to be seen lurking around a chilly Florence, chatting on iPhones, sipping espresso and admiring the spectacle. Jeremy Hackett, Luca Rubinacci and a host of other Sartorialist favourites strut around the magnificent Tuscan city from show to show, brightening each piazza with their dazzling attire.

The coverage of this glut of plumage-presentation is as prodigious as the sheer numbers that pour out of the grey, winter-lit buildings in the most astonishing array of seasonal (and unseasonal) male clothing. Scott Schumann and other photographers’ coverage of Pitti is the National Geographic of menswear; buyers, business owners, tycoons, tailors, shirtmakers, shoemakers and artisans are all captured together through the lens in this tiny habitat. Indeed, the coverage of Pitti peacocks is almost as important to the organisers as the event itself, with PittiImmagine commissioning their own photography of the various species spotted.

The reason for their congregation is actually rather dull; stands exhibit wares that you have already seen before, shows introduce you to fashions you already know. This is perhaps why their mere appearance provokes more interest from the long-lensed street snappers who wait patiently with their D3s or their 1D for an orange checked suit or a fur collar to appear, squinting into the sun. The beauty of the photographers’ position is the intoxicating concentration of experimentation, colour and style that so often evades them in other localities. This is a seasonal feeding; they know the location and they return hungrily year after year.

For all the spectacular creativity on display, you can’t help but get the idea that a good many of the fine species swaggering across the cobbles of Florence are self-consciously on display; their aesthetics refined, intensified and even exaggerated as though they are part of some mating ritual with the lens. There is no shame in this, it is only unfortunate that natural instincts are thrown aside for the benefit of the camera. Others may disagree and cheer that the only thing cast aside are their inhibitions. However you analyse it, they compete for the lens as no prey would compete for the jaws of a predator. The beneficiary of this surreal feast is, of course, the blog devotee; the devourer of sartorial ideas.

Where else would we get the idea for matching our trousers to our buttons?