What about Digital Watches 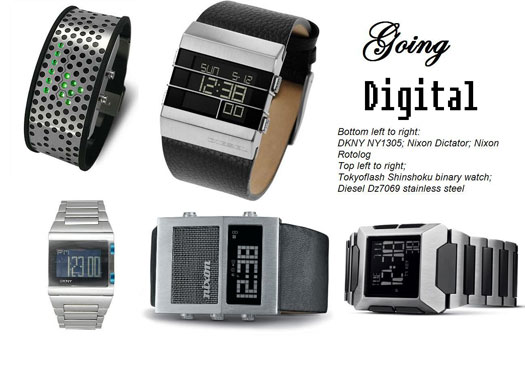 “Go digital”, “The world’s going digital”, “Are you ready for digital?” There is so much talk of digitalisation these days. Everyone is scrambling for a share of ‘the digital age’. Knowledgeable pals tell me of new digital advertising, of the digital newspapers of the future; my television barks at me of ‘the push for digital’, my news channel instructs me as a ‘digital viewer’ to ‘get interactive’.

It’s all very promising and progressive and much of this digitalisation is a vast improvement on the old analogue services we have been receiving. Digital radio is not only crisp and clear, but it offers more variety; anyone yearning nostalgically for crackly sets and four wavelengths is being irrationally romantic.

The same goes for digital television; on-screen TV guides, pausing live television, digital sound and interactive services are a far cry from thumping a fist on an ugly and irresponsive box.

However, one shouldn’t get carried away. After all, some of the pleasure in the analogue world is not just in form but in function too.

The mechanical wristwatch remains a delight; an icon of design that I hesitate to mark, for fear of jocund interpretation, as ‘timeless’. Though I may buy Smart phones and Ipods and HDTV’s, when it comes to my daily, nay hourly friend, the wristwatch, I prefer to choose out-of-date technology. For it’s all about the little things.

The tiny clicking of the wheels, the second-hand sweeping majestically around the face and especially the imperfect timekeeping. Oh indeed.

I can gibber ad nauseum about the benefits of finer radio, crisper television and the wonders of the digital age but I am strangely content with the inferior timekeeping abilities of my mechanical watch.

If I was consistent in my embracement of this new age, I would purchase a quartz watch and, better still, a watch that tells me the time not through roman numerals but through a seven-segment display.

However, I am not consistent. I am fickle and I choose things on the unsteady basis of aesthetics and whim. To me, seven-segment display watches remind me of childhood; when my classmates attempted to trump others with on-board calculators and infra-red controls that changed television channels.

There can be as much frivolity in a plastic and perfectly on-time digital watch as there is in the antiquated mechanical timepiece. It’s all a matter of personality. For some people, their desire is a watch to reflect their personality; a Breuget for a Napoleonite, a Franck Muller for a Hitchcock fan. However, for fans of productions like Star Wars and Star Trek, the watch of choice might be something rather futuristic.

Admittedly, digital watch design has come a long way since the faddish days of King Casio’s calculator wristwatches. Seven-segmentism is so old that it is now seen as retro. However, as with all things, very few designs are worthy of the man of style.

If you feel, on your more modish days, like strapping on something other than your ticking Patek, keep in mind that digital watches are produced inexpensively and therefore purchasing a well-designed one does not have to break the bank.

Imagine a gadget from a 1960s spy film and you have the perfect aesthetic for digital watches; matt stainless steel, primitive LCD display and the fewer functions the better. We are already armed with phones that seem capable of commanding submarines, so further gadgetry on watches would be futile and it seems we are now content that our wrists are the place for mere time and datekeeping.