What’s Wrong With a Bit of Cord? 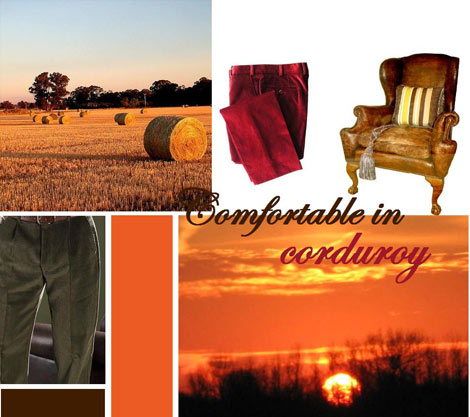 I am a product of the countryside; growing up, surrounded by fields, birdsong and woods, I always dreamed of a life in the grand metropolis; in my favourite city on earth. However, though I have easily adapted to the ways of London, as I mature (“rapidly” as my grandfather tells me) I am aware of an increasing nostalgia for the hay bales, muddy walks and energetic weekends of my youth. A recent visit to the family home reignited sentiment for the satisfying comfort that the quiet of a country evening can provide, the glorious repose of an armchair, bathing in the scarlet light of an early autumn sun; a book, my old CD collection and my old cords.

I forget too easily the fabulous warmth and luxury of corduroy. So used to denim and it’s adequate but comparatively hard texture, slipping into a pair of forgotten cords is like tucking into an overlooked premier cru, dusting behind the crumbling shelves of a cellar: unexpected luxury is magnificent.

Autumn is the perfect time of year to ‘tuck in’ to your favourite cords; or, as the case may be, invest in a new pair. And what an investment; browsing Hackett with a friend of mine, he informed me that their cords had made him eschew denim; “They’re so comfortable” he said, digging through the piles of mustard yellow, pumpkin orange and cranberry red “and so warm.” The other advantage of corduroy trousers is that they are available in such a variety of colours, allowing a gentleman to express himself thoroughly. Their wonderful texture is also alluring; the sight of soft cord falling onto burnished leather is marvellously gratifying and their smart/casual versatility allows them to be used in a great number of situations.

Another friend, very conservative in outlook, pointed to a possible limitation of cord; “You shouldn’t wear them in town, stick with flannel.” My own feeling? I disagree entirely. Cords may not be the custom town trouser, but these days, the marginal ‘formality’ of cords cannot be called into question; when three gentlemen walked into a Relais & Chateaux establishment wearing ripped denim, the gentleman who appeared in cords seemed to give the embattled maître renewed hope in the quality of patron. In other words, by today’s standards, cord is considered very much on the smart side of ‘smart-casual’ – even in town.

Although cord is worn less and less by the 25-35 generation, being outgunned by denim in terms of fit and fashion, there is a loyalty among the older (wiser?) generation of 45-60; owning a pair of cords, for many in this group, is customary. Owning several is to be expected, and owning more than five? Not unheard of. Due to this association with the ‘Viagra generation’, cord has been unfairly sidelined. While denim rules the casual trouser roost, corduroy is not being given the chance to reinvent itself; there is not enough of it on the high street and pitiable attempts to ‘commercialise’ it (for example, branding cord trousers not as ‘cords’ but as ‘jeans’) have not paid off. From one angle, I can appreciate the cold disapproval the Bright Young Things have for cord trousers; they do not flatter fashions and are frequently manufactured in uncomplimentary fits. Not to mention the fact that, apart from Ralph Lauren, influential designers have generally steered clear.

However, the ageism in fashion is unhealthily prominent; as apprehensive as the old are of denim – a wonderful and versatile fabric – the young are equally suspicious of cord. “Hello granddad” an acquaintance once hailed cheerfully, when I strolled into a drinking establishment wearing cord trousers. Somehow, the jibe had little-to-no impact; my corduroys were too comfortable for me to care.