Why I Won’t Suit The New iPhone 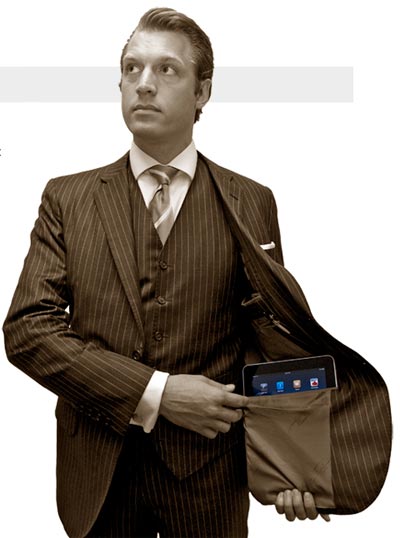 I’m a big fan of the iPhone.

It’s so pretty. So well formed. So smooth. So useful. So reassuringly solid.

I am not, however, a fan of the iPhone 6. And the less said of its gargantuan, plus-sized sibling the better.

The implied philosophy that ‘size matters’ is not incorrect. It does. Unfortunately, it counts in the wrong places as well as the right ones.

For as thin as the objects may be, their surface area still makes a substantial impact.

Though many have long complained about the ‘tiny’ screens on iPhones when compared to other brand’s models, I have been quite satisfied with a mere 4 inches. And so have my inside jacket pockets.

I am not one of those who finds it convenient to keep my phone in my bag, nor do I like keeping it in external pockets – as they too often get doused by one of London’s stranger varieties of rainshower.

The driest, and most convenient place, to keep my precious phone is in the inner chest pocket of the suits and blazers I wear on a daily basis. This allows for easy access in the event of answering and making calls, controlling the music selection when headphones are attached and feeling the phone vibrating with an alert.

So far, the Apple iPhone has been of a size that has a low impact on the line of a gentleman’s jacket. Even those items that are finely tailored don’t show a hint of the famous ‘rectangle with rounded corners.’ For those like me that prefer to wear slim fitting jackets, this design discreteness has been a godsend. And other style-minded chaps seem to agree. It takes no genius perusing Pinterest to see that the iPhone is probably the most used phone at Pitti Uomo.

However, it should come as no surprise that we weren’t really meant to walk around with tiny computers suspended next to our bosoms. And the suit, evergreen as it might be in terms of style, was never designed for this purpose either.

And though the inside chest pocket is less revealing than others of its content (largely due to the canvas), a large object (in length and width) does something rather criminal to the beautiful shape of a jacket’s chest. I tried to put an acquaintance’s 6 Plus into my bespoke chalk stripe: “It won’t fit” I said “Ah. Is the pocket too narrow?” they asked “No. The phone’s too big. The pocket is the correct size for the suit.”

Then, another offered up to try the 6 instead. It slipped inside the pocket easily enough. I buttoned it up and looked in front of the mirror. Though the lump itself was shallow, it made such an impact on the silhouette of the suit that it looked as though I was carrying the Holy Bible.

Unlike gentlemen’s accessories of the past such as the hip flask or cigarette case, these supersized phones have not been designed with a sartorial mind.

The solution that most suggest, particularly the tailors, is to engineer around it. Some have created special smart phone pockets, sized accordingly, and many have relocated these lining pockets to the lower half of the jacket to reduce the effect on the shape of the jacket.

Of course, this has a hefty cost implication for existing clothes – and the results aren’t always flawless. It’s also dashed inconvenient to have the phone flapping about down near the jacket hem rather than in easy reach.

Size does matter. But so does elegance.