Why the fuss: Abercrombie & Fitch 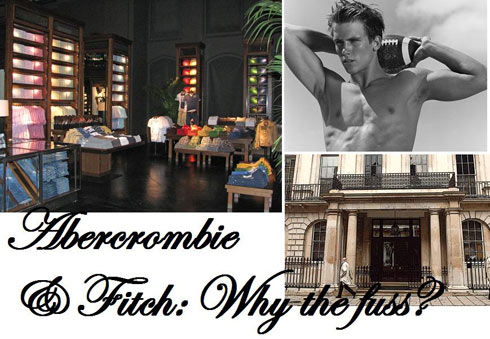 Walking up to Regent Street is a regular activity of mine. I walk across St James Park, up the Duke of York steps wedged beneath the clotted cream Nash Carlton House Terrace, and up Lower Regent Street towards Piccadilly Circus. I tend to avoid the Circus due to the high concentration of people congregating; taking pictures, loitering, pointing, pushing and shoving. If I were a tourist I could tolerate it. However, seeing it everyday is rather distressing.

What I used to do was take the route up Swallow Street. Until I realised that I saved even more time avoiding the throng by walking up Sackville and turning right down Vigo Street. However, I have recently had to avoid this route on particular days and resort back to Swallow and even Air Street to access Regent; my favourite shopping street. The reason? Well, it has nothing to do with the quiet establishments of Sackville Street – an ‘always empty’ travel agency, a stockbrokers, a couple of tailors, a book and printshop and Jasper Conran. No, even Vigo – despite the arrival of Napket and Starbucks – is not the reason for the consistent waves of people moving to and from Regent Street. At the end of Vigo, as you come to the corner of Gieves & Hawkes on Savile Row, you see the veritable ‘ants nest’; the line of dashing people can be traced back to a large and handsome building that sits on the corner of Burlington Gardens and Savile Row.

The steady stream of humanity moving in and out of this building would give the impression to the passer by that this is a structure of great importance. Is it a museum? Or perhaps an important royal residence?

However, passing by the building, from the strong shower-gel-perfume they seem to inject into the atmosphere to the low thud of vocal techno, you soon realise that this is no attraction of culture. The topless man, shining in oil, at the entrance to the store makes you think it could be some bizarre club; but it is only the bags that are carried out of the building that expose it as a shopping emporium.

Abercrombie & Fitch, although new to the area – an area of discreet art galleries, luxury goods and smart Italian restaurants – is easily the biggest, and noisiest, draw. Shoppers alien to the quiet Mayfair streets sit outside disconsolately, guarding their Bruce Weber-photograph bags full of booty. But what sort of booty is it?

The little I knew of the brand came from word of mouth and popular culture. I remember listening to the song ‘Summer Girls’ by the Lyte Funky Ones, when I was a school lad, in which the lyrics confessed a partiality for girls that wear Abercrombie attire. A&F was one of those American brands that was generally unavailable in the UK and this hard-to-get-hold-of aspect only heightened the curiosity. Since then, it has made numerous appearances, and received many a mention, in many Californian drama series to which, naturally, the youth of the UK have become rather addicted.

Though a born sceptic, I gave the store the benefit of the doubt and paid a visit to see what all the excitement was about. When I walked in I almost stumbled into inanimate objects for, much to my bewilderment, the store is completely devoid of natural light. It’s rather like walking into one of those Disney ‘rides’; I half expected a robotic pirate to thrust a sword at me from the shadows. In the dim light I was approached by a good number of muscular Narcissi who were helpful, but conspicuously so. I spotted racks, piled extraordinarily high, with colour and so I made my way over for examination.

The incredible thing about Abercrombie & Fitch clothing is that it is the least interesting thing in the shop, or I should say, the least distracting. Apart from a couple of pleasantly striped but poorly constructed shirts, most of the clothing looked like it had washed up on a beach in Thailand; the flotsam from a backpacker’s cruise across the waters of South East Asia. The branding was prominent and repetitive; A&F stamps on polo shirts, t-shirts and even shorts. I looked for clothing more suited to a cooler environment, but could find none; it appears it is always summer in the Abercrombie world or, at least, ‘Forever California.’

Incredibly, though Abercrombie & Fitch clothing cannot boast design or uniqueness, it comes at a hefty price. The polo shirts, ‘custom washed’ – and blighted by hideous white ‘stamping’ – were as expensive as Ralph Lauren’s, a minute’s walk away.
Everything in the shop was exorbitantly priced; I imagined poor parents shuffling through with their children, being asked to purchase shirts and shorts, of dubious value, for more than the cost of their hotel. Nothing I touched reassured me of there being any fair worth in the shop. There were no special materials; no silk or cashmere, nothing that had taken work or craftsmanship. Nothing that required more than a squiggle of a pencil from an infant.

My understanding of A&F is that they are selling a ‘lifestyle’; the ‘Californian dream.’ When I compare this ‘ideal’ with the, oh let’s say the more ‘East Coast’ ideal of Ralph Lauren down the road, it’s difficult to believe you are talking about products and ideology from the same nation. Ralph Lauren’s shop has a focus on design classicism; cut, material and quality of finish. Abercrombie, though comparatively priced, offers none of this. It merely offers the purchaser a simple garment and the ‘privilege’ of wearing the Abercrombie name across the chest, thigh or any other area of the body broad enough to emblazon a logo. Ralph used to do this – Polo Sport was an offender – and a few of his items have overly generous references to the designer. However, I am always reassured that items from his store, though certainly symbols of status, have many more additional qualities to recommend them.