Why The Fuss? ‘Effortless’ Style 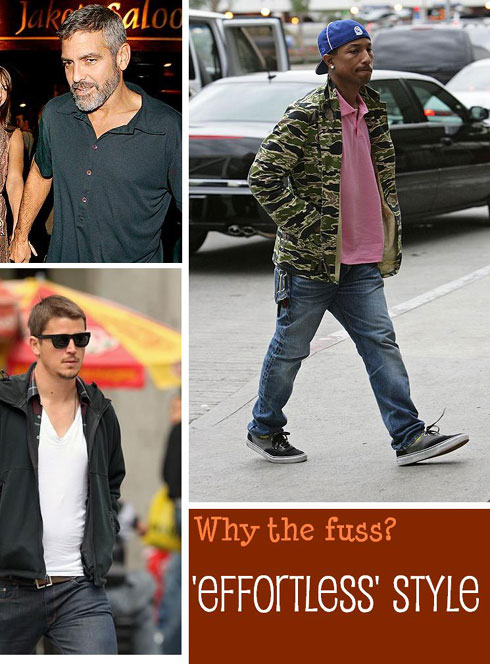 “Yea, he’s cool” the girls nodded, glancing towards the unkempt, tramp-ish looking gent at the bar; a man so carefully careless in appearance and so studied, that the girls’ following remark (“He’s just so effortlessly stylish”) was a curious hilarity. On another occasion I was asked by a lady friend my opinion of her new boyfriend; an out-of-work actor of fascinating pretension. She particularly wished to know what I thought of his attire; “Don’t you think” she gushed, fanning her flushing face with her fingers “he’s just like, the BEST dressed man ever?!” Acknowledging her ardour, I provided diplomatic mutterings that conveyed a disingenuous approval. My true feeling was more of pity; for the gentleman was merely another example of a style which, once aligned to a greater art of sartoria, is known merely as ‘effortless.’

George Clooney is apparently the archetype of this style. His ‘ability’, according to his rather star struck columnist proponents, is ‘to look like the best dressed man in the world whilst seemingly making no effort at all.’ While Mr Clooney manages, armed with his considerable fortune, to look vaguely presentable at occasions which require a modicum of formality, he can scarcely be considered the best dressed man when he and ‘dressing’ maintain only the slightest of nodding acquaintanceships.

This ‘effortless cool’ has less to do with dressing and a great deal more to do with sexuality; sartorial sexuality, which for much of the Twentieth century, replaced propriety and ornament in female dress, is now the pinnacle of style for a great many men. Clooney is a desirable and attractive man who, apparently, manages to transform seemingly ordinary clothing into style choices of sudden and magnetic genius. The reason why is because Clooney, though outdressed in all styles by more ‘anonymous’ gentleman across the world, is smothered gracelessly in Hollywood’s secret sauce: sex.

‘Effortless’ cool used to be about a lot more than sex. It used to be about the way a gentleman could pair the casual with the more formal, largely for reasons of comfort or practicality, and still achieve elegance; the way he would close his dressing gown and knot the belt; the way he would quickly roll up his trousers when wearing loafers in the summer; the way he would tip back his hat to allow the sunshine to warm his face, or use a tie as a belt when feeling in a jaunty mood. The new ‘effortless’ cool offers no such invention or attractive pragmatism. It is not about ‘effortless’ dressing but simply avoiding dressing; shirts unbuttoned to the chest, contrivance of simplicity, avoiding details and shunning innovation.

The most important thing to note is that it only appears to ‘work’ on men of a certain physical appeal. If you are on the books of Storm, are the tall silver-haired totty of the boardroom, got paid $12 million for your last acting job or tend to make girls weak at the knees with the merest flutter of your eyelashes, you’re laughing; a slovenly ‘style’ will not distract from your other charms. If, like the rest of us, you are not so genetically blessed; feeling rather short, awkwardly made or simply lacking in what might be termed ‘looks that can kill’, there’s precious little of the superficial to recommend. Wandering around in an open white shirt, clumpy shoes and a suit of average aesthetic and ubiquitous style is not likely to make others confuse you with Mr Clooney. Making an effort, for the majority of men, is far more attractive, rewarding and interesting than appearing not to have made an effort at all.