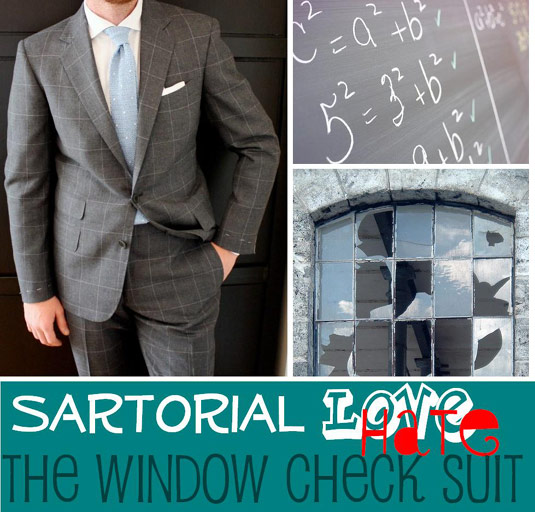 “Err Winnie” I heard being muttered nervously behind me as I quietly took my place at my desk for registration “why is there a maths book all over your suit?” It was a cool April morning. I was seventeen years of age and in the first year of sixth form. It was not de rigueur to wear ‘flashy’ suits – the faculty looked down on fashion statements – and most of the boys fell into line by wearing innocuous navy or charcoal grey. Being of a somewhat rebellious nature, I experimented with chalk-stripes and checks – the most outrageous of which was a charcoal grey peak lapel suit with a light yellow window check. It was this suit which had provoked the comment from my fellow pupil. And that lunchtime I endured what all school-age style pioneers endured; utter ridicule.

Unfortunately, I was an impressionable young scamp. I decided that I would no longer wear this rather splendid creation, a gift from a doting father, whilst my more conventional suits were available. In my defence it was not merely peer pressure which persuaded me to pursue that course; a few snooty comments from tutors, mumblings about being at school to work and not show off, made me reconsider the appropriateness of the design. It was always known amongst my friends as the ‘maths check suit’ and as awkward as it’s introduction was all those years ago I have never considered it to be anything other than magnificent. I am not alone in my admiration of the window-check design, but it has a great number of detractors.

‘Far too loud’, ‘distracting’ and ‘downright ugly’ have been the charges levelled by those of my acquaintance. Some tailors dislike it because the pattern is too similar to that of a country suit; to them, wearing a country suit in town is frankly deplorable. It is true that, unlike the chalk or pinstripe, it is not really a City-boy suit. It doesn’t have the gravitas of a stripe. In actual fact it is extremely playful; a smile always seems brighter in a window-check suit. It is true that it has a trace of the bucolic about it; tweed checks are often window-checks and the classic hunting waistcoats are sometimes made with the pattern. However, like the Glen Plaid, this reveals versatility; a GP or a window check is an acceptable choice for the country-park hotel, a chalk or pinstripe is not.

Like the striped suits, I think turn ups are best for window-check suits; it might not be ‘correct’ or even fashionable but aesthetically it somehow looks better. I also prefer a peak lapel with a window-check as this more formal than a notch and takes a little of the casual-country edge off the creation.