A World Of Imagination Adjusted 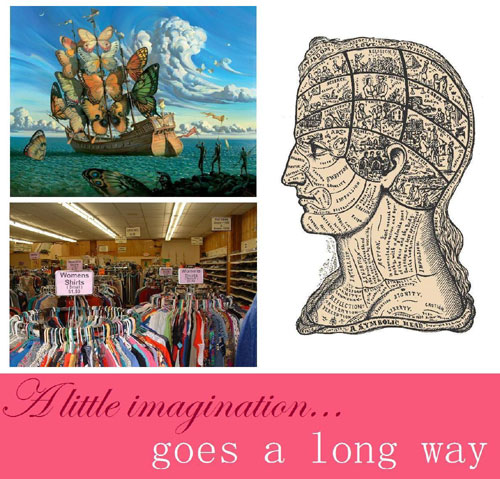 One of my joyous memories of childhood is the extent to which I exercised, and was encouraged to employ, my imagination. Imagination was always my friend in solitude, a make-believe sunshine on a rainy day. Unfortunately, my rebellious teenage years corrupted the fantasy and my early twenties were years void of invention. Now, in my 27th year, my innocence entirely expunged, I feel a pang for the days on which I was left with my playthings, a view of the sky and my own impossible dreams.

My imagination, which at one point in my younger years my mother commented, was so vivid that I would often replace the reality with the fantasy entirely and would vociferously reject any tired pleadings for my return to life, is not what it was. Years of the disappointing realities of life have broken the imaginative spirit. Mores the pity, for I have long thought that a good imagination is one of the most underrated qualities in any human; child or adult. Imagination is the glory of man, his triumph over the beast; the first intelligence in man was measured by his ability not only to observe but also imagine. All art, from cave paintings to cathedrals, shows a mind capable of soaring through the heavens.

When I wander the heavy laden racks of high and side street stores, glancing through price tags that rarely touch triple figures, I look around and see a disconsolate group of people doing the same. Rarely do they ‘see’ anything; they merely ‘look.’ Whether their unsettled state is due to their resentment at having to purchase in such establishments or whether they are bored by clothing I cannot say but I detect a lack of enthusiasm and, more importantly, a want of imagination that I find a trifle upsetting, for one of the few activities in which I consistently and happily employ what remains of my imagination is shopping in such environments.

I once asked a cynical friend, a designer label addict, to go shopping with me. I was determined to show him that though some places do not pre-package your perfect aesthetic onto mannequins, play you soft-and-crackly early Dean Martin and offer you an environment more akin to a boutique hotel than a shopping establishment, they can offer you garments which, imagination permitting, could be so much more than a sad little piece of cloth in a strip-lit thrift store. The key is not to buy into the aesthetic of any store but simply to create and maintain your own. If, for example, I had bought into the GAP aesthetic, I would never have altered the buttons on my £20 blazer, nor would I have paired it with a vintage waistcoat, French collar shirt, tie and punch-cap Oxfords.

If you like a particular style, say for example Hackett – who do produce some of the most arrestingly handsome window displays – don’t believe that only Hackett can offer you that look. It might take a little longer but you can find your own Hackett look without stepping into a single store. A lonely linen double breasted blazer in a cheaper establishment might not be sold as effectively as the Gatsby-esque displays at Ralph Lauren, but evaluate the product for what it is, imagine wearing it and, most importantly, imagine the way in which you will wear it.

“To look at a thing is very different from seeing a thing. One does not see anything until one sees its beauty.”