‘Would I Look Good in This?’ 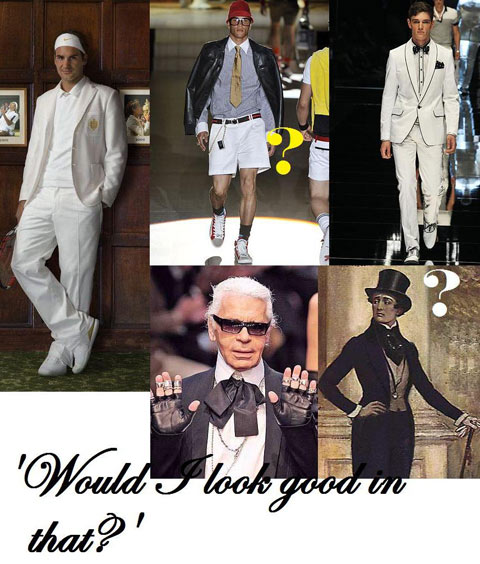 One of the things I am always aware of, being overly concerned with my appearance and wardrobe, is my ability – or indeed, inability as the case may be – to vary personal style. It’s certainly a good thing to have what one might refer to as a ‘uniform’; a safe combination of shirt, jacket, tie, trouser and shoe that you can always rely on but the risk with such uniformity is that you tend to avoid experimentation – as well as risking the affliction of peace of mind with sartorial boredom.

Many people are capable of identifying themselves with a particular mode or style: “It’s nice but it’s just not me…”, “I’d love to be able to wear that, but I have my way of doing things.” They appear content in the knowledge that contentment is illusory; after all, we’d all love to be able to do many things. I wouldn’t mind winning Wimbledon or discovering the cure for a widespread disease but I recognise my own limitations and the fact that those things are not going to happen is something I accept.

And the grass, so they say, is generally greener on the other side of the fence. Whilst the public lavish attention and adoration on the celebrity, the celebrity constantly seeks the shade, the private life; unable to comprehend the desire the anonymous have for a life in the bright lights of fame. A man of considerable style might pace the streets with apparent confidence but a glance in the direction of an alternatively attired chap might set the wheels of his mind whirring for the possibility of change.

In style, confidence and self-security are vital components. Without them the supposed man of style is a poseur and pretender; a charlatan who hasn’t conquered the infuriating tendency of fashionistas to tinker and tamper. However, it must also be recognised that the very essence of personal style is self-discovery. Experimentation and dabbling are important aspects of this discovery – the man of one suit might not lack funds, but imagination.

Maturation also plays a role. Roger Federer admitted he was always the shy teenager, forever in sports clothing, until he grew into his hidden passion for clothing, making friends with the movers and shakers of the New York fashion set, revealing his ‘embarrassing’ joy in shopping for clothes. Many men go through this period, some earlier than others, and some enter it without realising quite what they are letting themselves in for.

I believe in the idea of personal style; I believe it is detectable and identifiable. Or at least it should be. My fear of remaining too ‘uniform’ is a symptom of my interest in fashion. I am confident in the clothes I wear, and the clothes I choose to buy, but I am often afraid that I am only touching a percentage of the ‘style’ that is available to embrace. I fear that the ‘uniform’ has become my identity; someone recently complimented me on my usefulness in emotional situations as I always decorated my jacket pocket with a silk square. I was somewhat nonplussed. The very idea of predictability can either crack sartorial confidence, or it can strengthen and galvanise.

Naturally confident, even arrogant individuals will see this as an acknowledgment of their signature; Lagerfeld for example would have no problem in being identified as the monochrome man. However, this places external recognition and honour at the heart of one’s style and that can never do; if you dress for someone other than yourself, it is strikingly obvious that you are doing so.

I think the fear of wanting something that you do not have and being someone you are not is pointless; no collection, no matter how large, is ever complete or the owner satisfied. Imelda Marcos is an illustration, albeit an extreme one, of the minutiae in differentiation the collector can note. Such a collector never stops wanting what they do not have and acknowledging that weakness is important; ‘travelling’ in all it’s forms is a favourite pastime of the human being and we never seem to tire of it. The evolution of your wardrobe is just as remarkable as the evolution of your personality and at times, one often reflects the other.

The personal desire of variety is natural and, though I have issued rather stiff words on ‘confidence in personal style’ and written on achieving a peace with your own gut-understanding of ‘what style means to you’, the reality is that curiosity, though it has been distributed in different quantities, is in all of us.