There is a pandemic spreading amongst London men. Yet again on the tube the other day I spotted a well dressed, suited and booted, young fellow sporting a load of colourful string and plastic tat around his wrist. This disease seems most contagious among the middle class and privately educated, striking down even the junior sons of House of Windsor.

This wrist tat (WT) is not part of some government scheme to tag parolees, or some ancient symbol of tribal belonging – although in certain cases there is an element of social rehabilitation, by seeking public acknowledgment for the extent of one’s charitable giving.

That said, I can and do understand there is an aesthetic quality brought about by that most useful of sartorial tricks, namely contrast. The combining of the ultra formal and the informal is something all the great dressers have demonstrated at one time or another, whether it be Fred Astaire wearing three piece suiting and button down shirts, or the Duke of Windsor using suede shoes.

I just think if you’re going to introduce a little playful wrist action to your wardrobe there are better ways to do it. 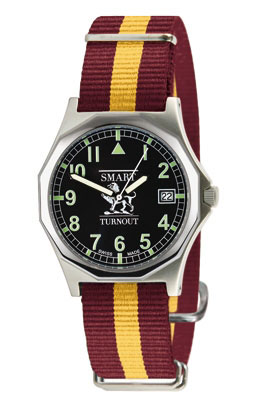 My preference is to go for the military watch and a coloured wrist band. The Forces heritage gives the look anchorage, while adopting coloured bands in obviously synthetic materials provides that devil may care informality. It goes without saying that it works well with casual summer wear, but done with suiting it can work really well.

If authenticity is your thing then England’s Cabot Watch Company (CWC) are the current suppliers of watches to Her Majesty’s Armed Forces, and have been for nearly thirty years. But, they’re not easy to come by outside of the UK. However, a favourite retailer of mine, Smart Turnout do a very reasonable Swiss made watch and have by far and away the best selection of straps, which can be bought individually.

While unlikely to permanently replace your Omega or your vintage Rolex, it is nonetheless another option for playing with contrast.