Things I Wish I’d Known When I Was Twenty-Two 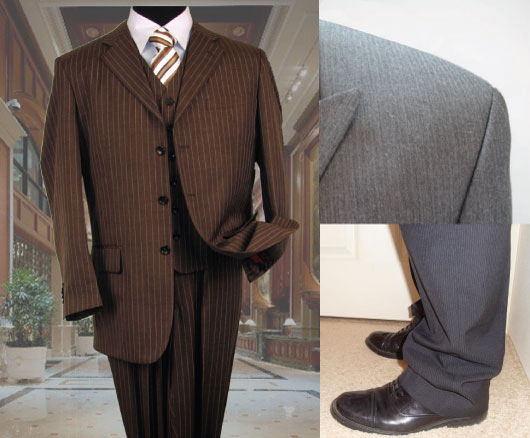 While checking through the latest posts from men’s fashion blogs it struck me that the vast majority of my favourite writers are younger than me (I’m thirty), often by a good five or six years. Looking back at how much I knew about style when I was their age is a rather humbling experience. When I was twenty-two the most stylish suit I owned – or so I thought – was a ventless chocolate brown number that I had made by a Bangkok tailor. I used to wear it with black loafers and walk around Tokyo thinking I was the daddy. The shame, the horror…

But I guess we all have at least one regrettable clothing episode from our younger days to contend with. Knowing what I do now, I’d love to go back in time and tell my younger self a thing or two. It would probably be along the lines of:

“Get those trousers hemmed”
Unless you’ve got real fashion nous it’s always best to have your trouser legs hemmed long enough to cover your ankles. However, there’s no need for them to rumple up over your laces, as mine used to.

“Buy some decent ties”
Having lots of ties isn’t necessarily a good thing. I used to have a lot of ties but 70 per cent of them were cheap and, to be quite honest, pretty disgusting to look at. In those days, when money was tight, quality and versatility should have been my priorities, not variety. Just three ties – a good solid navy, a grey, and a repp stripe – would have seen me through most occasions.

“Wear your work clothes with pride”
When the time comes to enter the world of work men either embrace the smartness that wearing a suit and tie can provide, or rebel against it by permanently leaving the top shirt button undone and purposefully yanking the tie knot down in a dishevelled manner. I was one of the latter. One thing that time has taught me is that few – if any – people appreciate an unkempt shirt and tie. I have to admit that I find it hard to resist the urge to tell scruffy oiks to sort their ties out, especially when the knot is halfway down the chest and the tip is floating somewhere south of their crown jewels.

“Think about colour”
God knows what possessed me when I decided that my first tailored suit should be brown. In fact I’m surprised the tailor didn’t smack me over the head with his heaviest swatch book and throw me out by my ears. The same goes for shirts and shoes, which I mixed together with little regard for whether they would compliment the rest of my outfit. I’d direct my younger self to a copy of Alan Flusser’s Dressing the Man.

“Buy one pair of dark brown brogues”
If I’d known how versatile brown brogues are it would have saved me an awful lot of money in the long run. If I’d bought one good pair of Crockett and Jones when I was twenty-two I probably wouldn’t have spent anywhere near as much on poor quality shoes, and I’d still be wearing them now.

“Remember that you’re not playing American football”
Either I’ve lost a lot of weight in the past eight years or my shoulder pads were way too big back then. I’d recommended that my younger self buy suits and jackets with barely padded or natural shoulders. I’ve found that, for me at least, they look and feel far more comfortable and “right” than more structured ones. If you haven’t got big shoulders then just go with it – big shoulder pads don’t fool anyone.