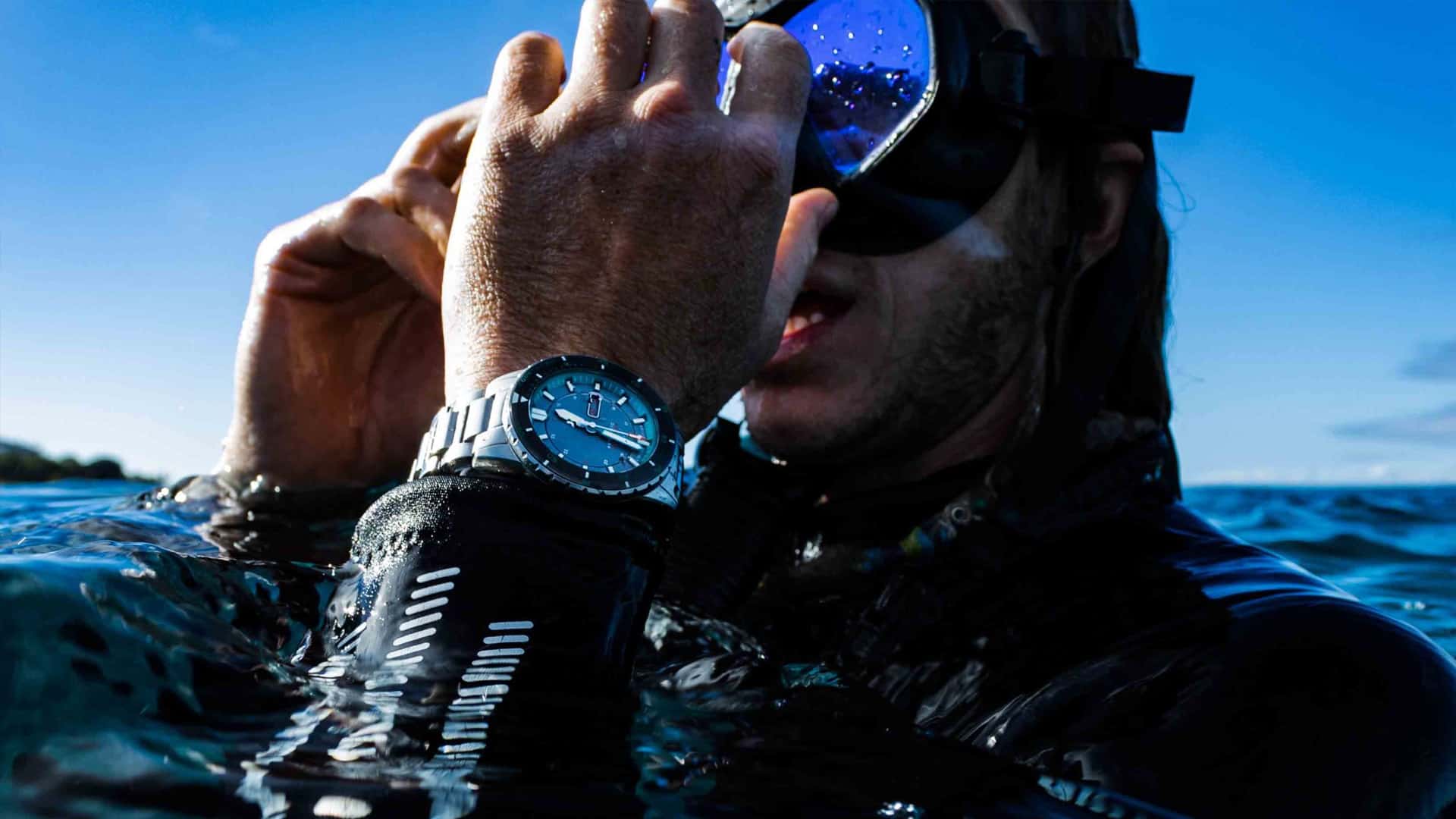 Whether you're a deep-sea professional or sun-lounge lizard, these eight diving watches will go the distance, in both the submarine and sartorial sense, without breaking the bank.

Of all the tool watches, with the possible exception of pilot, diving watches are probably the timepiece most worn in situations where their intended function is rendered completely useless. Generally speaking, people who own divers have never taken them deeper than the deep end of a swimming pool.

However, what makes a watch suitable for open water – chunky unidirectional bezel, robust case construction, a rugged retro aesthetic – are the very things that make them so versatile. They look great with anything your wardrobe can throw at them, from business suits to board shorts. You don’t have to take them off to do the washing up or the kids’ bath time. And, thanks to 007, it’s even acceptable as evening wear.

What is a dive watch? 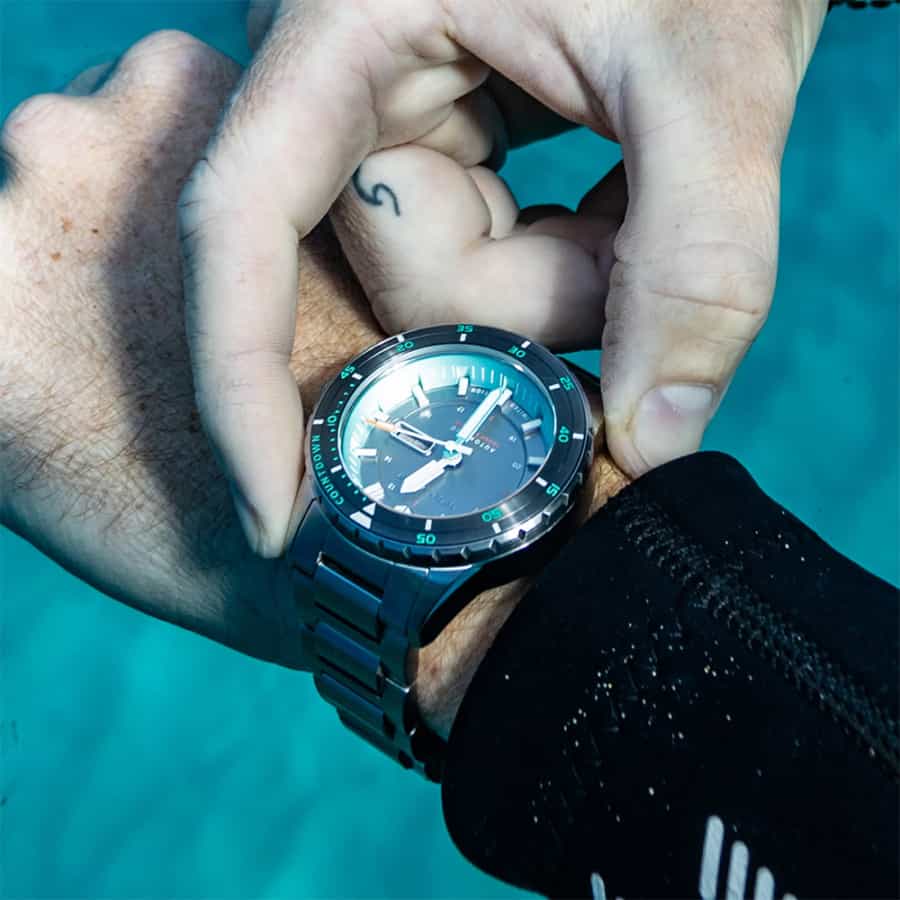 Before dive computers, this style of watch was an integral part of a diver’s tool kit. This is why the International Organisation for Standardisation (ISO) has the standard 6425, which applies to watches used for diving. It states that the timepiece must have legible minute markings, which are still visible at 25cm in total darkness; a unidirectional bezel; a running seconds hand that is also luminous; have resistance to magnetism, shock and chemicals; and a strap that won’t fall off.

Water resistance is where things get a little confusing. The ISO states 100m as the minimum, with a lot of divers going to 200m and 300m (or 1,200m if you’re Omega and want to show off). However, the Professional Association of Diving Instructors (PADI) Open Water certification will only allow you to submerge to 20m (or 40m, if you take its Advanced Open Water certification). Go any deeper than 57m and the air in your tank can become toxic, making that extra 60m of resistance just for peace of mind.

Whether you’re a deep-sea professional or a sun-lounge lizard, here are eight diving watches that will go the distance, in both the submarine and sartorial sense, without breaking the bank. 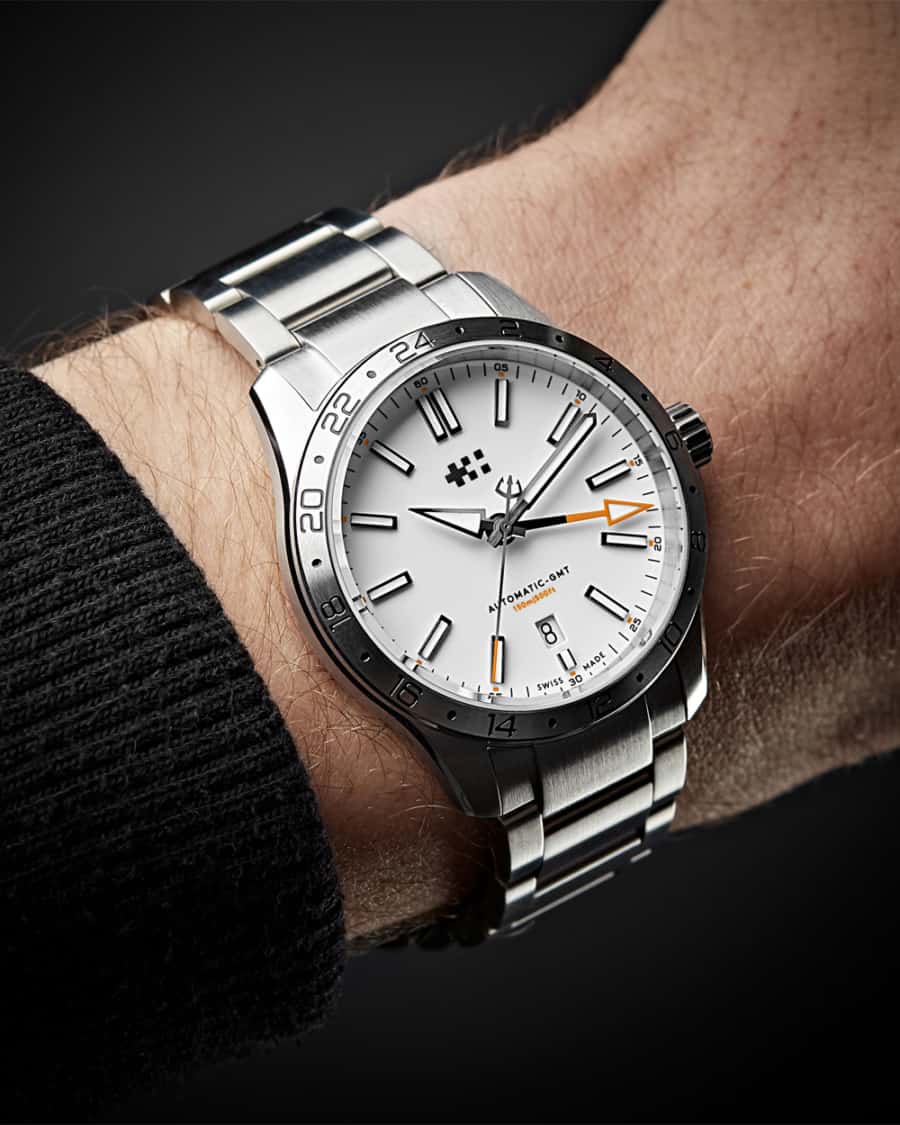 While possibly not suitable for night dives, this stylish number is ideal for spelunking or Arctic exploration, should you be embarking on either of those activities any time soon.

GMT-explorers, which is what this type of watch is called, were invented for pursuits where the wearer could become disoriented, either due to no light (spelunking) or where there is no discernible difference between day and night, such as during Arctic summers.

The case and bracelet are made from marine-grade stainless steel, the hands and indices are filled with SuperLuminova, and it’s powered by a Sellita with 50 hours power reserve. Not as chunky as some other dive watches, this is ideal if you want a style that will work with a suit, wet or otherwise. 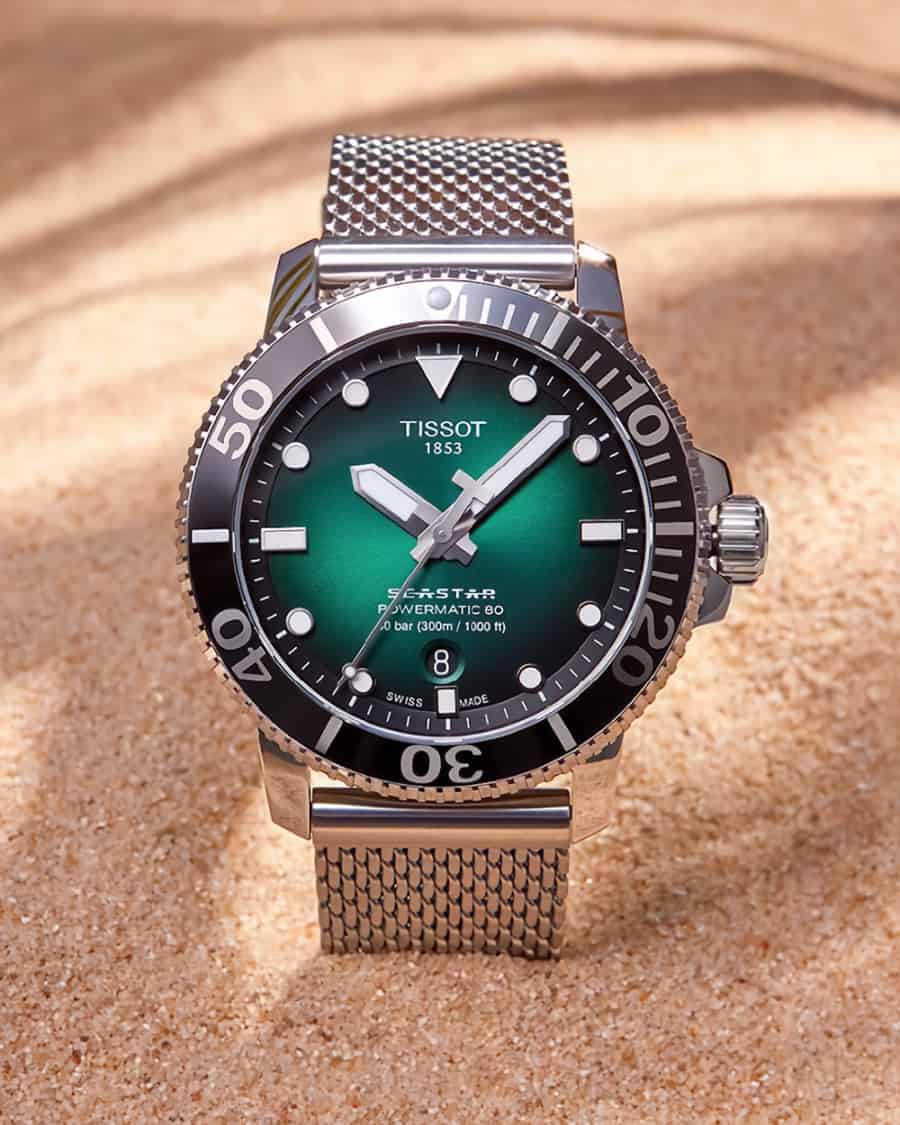 With a dial the colour of deep, sunlight sea, this big bold design is the quintessence of a diving watch. It has the chunky bezel with its eye-catching numerals; the dot and line indices with a triangle at 12 o’clock; and a guarded crown. It is also powered by Tissot’s revolutionary Powermatic 80 – robust, accurate, regulated by laser and, as the name suggests, with an 80-hour power reserve.

At 43mm, and 12.7mm thick, this isn’t an elegant timepiece and probably won’t slip under a shirt cuff. But that’s not the point. This is your weekend companion: fun, reliable, but can seem a bit inappropriate at more formal occasions. 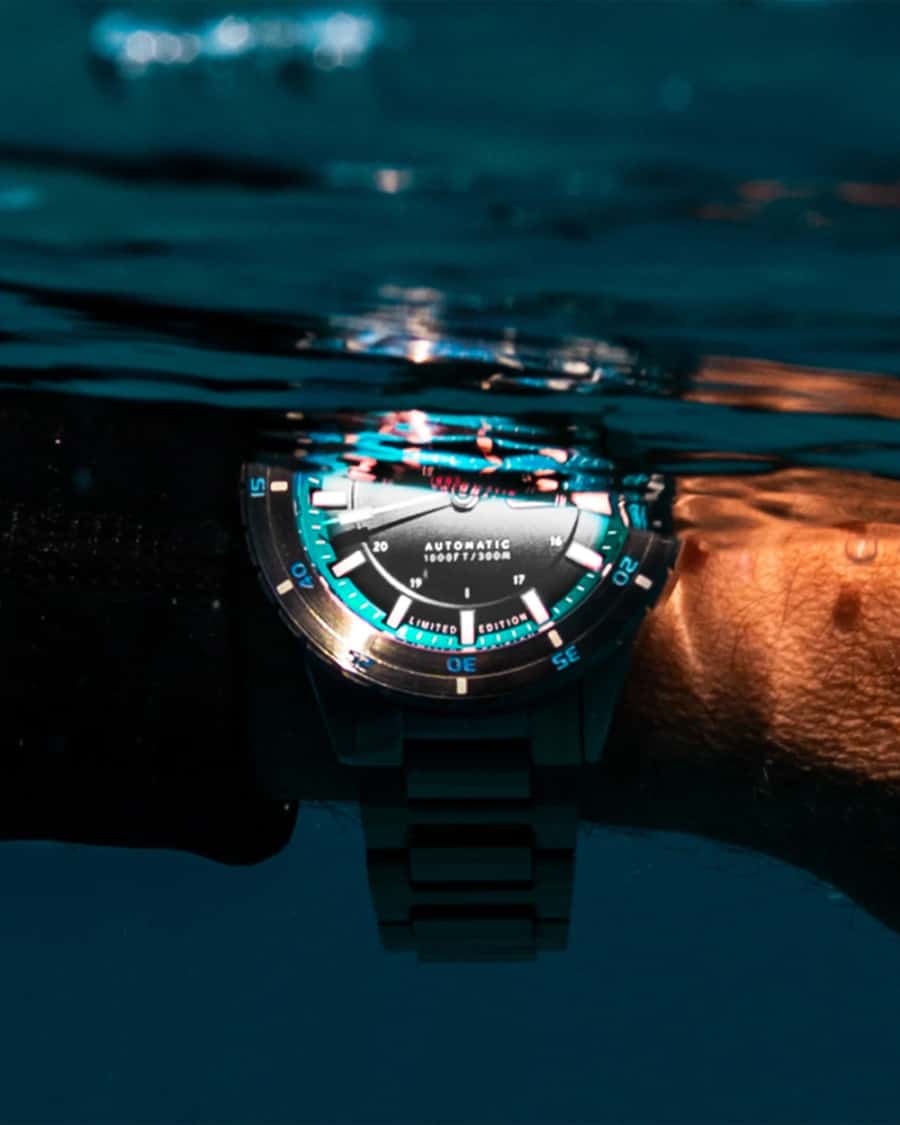 Spinnaker is renowned for making great-looking, excellent-quality watches at low prices, and this is no exception. Named after the Austrian marine biologist and underwater diving pioneer Hans Hass, this particular dive watch is a collaboration with the Marine Conservation Society, UK-based ocean protection charity.

The first thing you notice is the dial. Spinnaker has taken advantage of the 15.3mm case, using it’s thickness to drop the timekeeping element to the bottom and having the sides rise tall above it. There’s obviously the practical advantage of being able to see the time at all angles, but it also make you feel as though you’re viewing the dial, rather appropriately, through water.

The movement is Seiko’s NH16 TMI: reliable and no frills, which contributes to keeping the cost down. The strap is made from recycled plastic and numbers are limited to 500 on this colourway and 500 on a version with a gradated dial.

It’s a timepiece that does good and looks good. A winning combination.

Seiko has diving watch provenance. In 1965, it was the first Japanese brand to launch this type of watch, which was subsequently worn by the 8th Japanese Antarctic Research Expedition. It also developed a saturation-diver’s watch that didn’t need a helium escape valve, using instead an L-shaped single-crystal gasket.

This Prospex, named Samurai because its angular shaped looks as though it’s been sliced by a Samurai sword, is designed to be practical, dependable and durable. Everything about it is no-nonsense – from the bulky, highly legible hands and indices filled with Lumibrite (Seiko’s proprietary lume) to the black-on-black case and strap.

It may be inspired by the world of night diving, but this version of the iconic Seiko Prospex is giving us Dark Knight vibes, instead.

This isn’t reinventing the dive-watch wheel; this is a well-made, functional tool that could accompany you on a dive or be just as at home joining you for a beer by the pool. It’s stylish but not shouty.

There is a military-green version and the option of a steel bracelet, but the blue with the white 15-minute scale looks more in keeping with the dive watch aesthetic. Making the case 40mm, rather than the more commonly found 42mm or 43mm, firmly places this timepiece in the ‘wear all the times’ category.

Powering it is Hamilton’s H-10, the brand’s ETA 2824-2 derivative with 80-hour power reserve. Handy should you decide to, albeit briefly, wear something else for a change.

Holiday watches should be fun and this Triwa certainly delivers on that front, though it does have a serious cause at its heart. From its SUB Ocean Plastic collection, this watch is constructed entirely from ocean plastic, or tide ocean material – a recycled raw material made from 100% ocean-bound plastic comprising pellets, yarn and canvas, and filament supplied by Swiss company Tide Ocean.

So committed is Triwa to this being a sustainable product it has even used Doconomy, a user-friendly carbon footprint calculator, to calculate how much CO2 is emitted in the production of this watch. 1.68kg, if you’re interested.

This is one of those Japanese watchmakers about whom there used to be plenty of snobbery. However, things are changing and now the value, literally, of these brands is being realised. Watch forums and those into 1970s vintage Japanese styles have long appreciated Orient and the Mako is its calling card – it’s Submariner if you will.

This is the Mako II. While the original was a success design-wise, the movement – the Orient 46943 – had issues. The company listened and subsequently released version II, powered by the new and improved F6922. It has a better integrated quickset day feature and the option of manual winding to kickstart things if the watch has been off the wrist for a few days.

It’s now a solid option for anyone wanting a classic diving watch but who doesn’t want to part with that much cash. 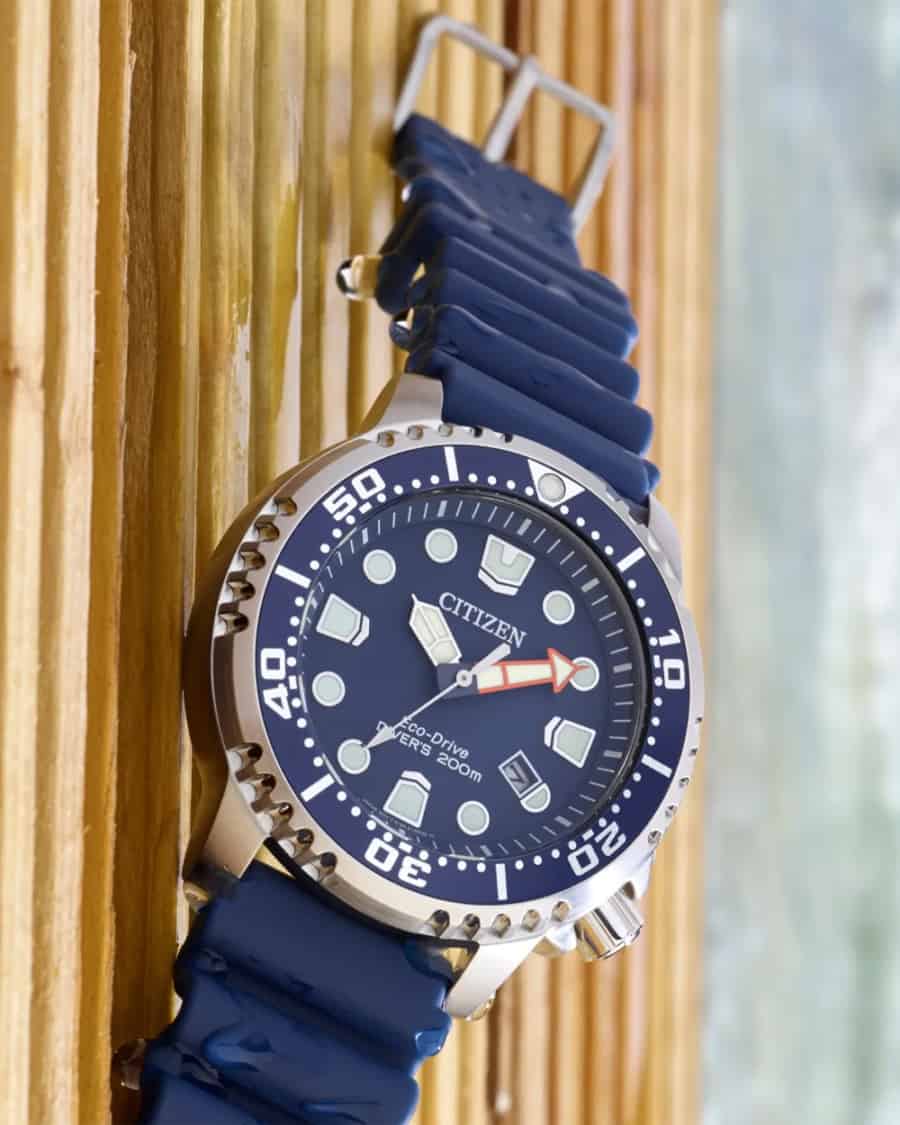 There’s a touch of the Seiko 5s about this, with its crown at four o’clock and bubble-headedness, but why not flatter with imitation. This is a great, no-nonsense dive watch.

It is pleasingly chunky on the wrist, and the polyurethane strap and 42mm stainless steel case are functional rather than fashionable – making this firmly a beach watch rather than one that could convert to the boardroom.

It also contains Citizen’s Eco Drive technology, which means the watch is powered by light, so you’ll never have to worry about running out of battery when you’re exploring the depths of the ocean. 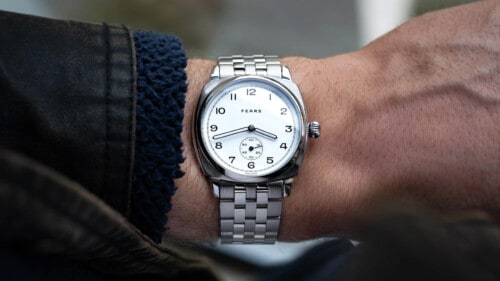 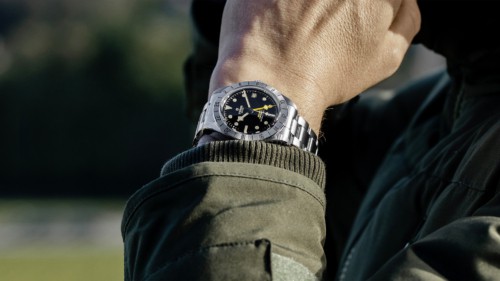