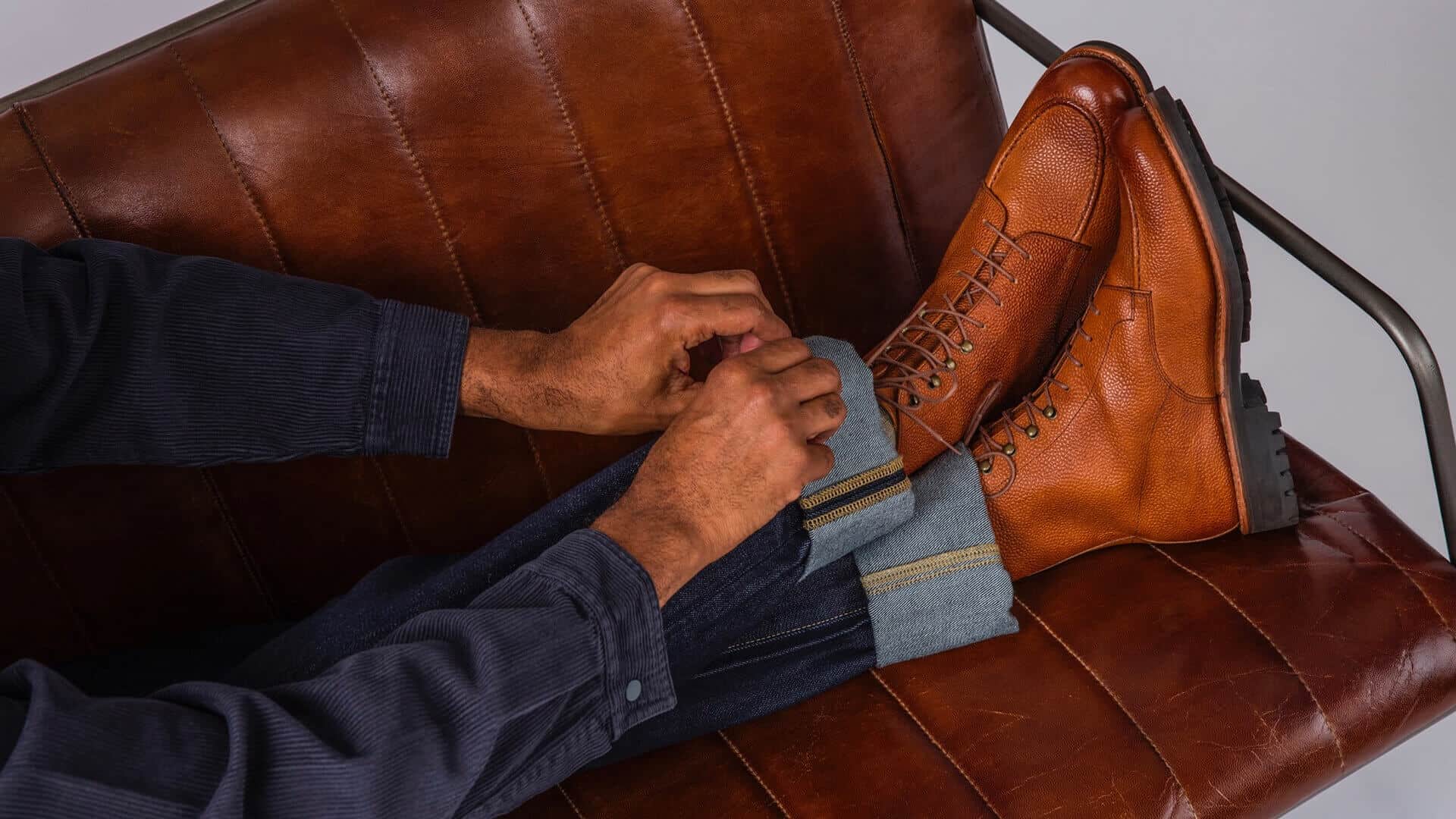 British shoemakers have been hand-cutting, lasting and finishing exceptional quality footwear for hundreds of years, and these 9 brands are masters of their craft.

Britain might not boast the richest culinary history, and the weather is notoriously bad, but when it comes to fashion, its heritage is unmatched. There’s Savile Row and its rich past as a tailoring mecca, while the UK’s diverse array of casualwear brands are the most creative and innovative around.

Then there’s the shoes. British shoemakers have been hand-cutting, lasting and finishing exceptional quality footwear for hundreds of years, and its master craftspeople have perfected classic models like oxfords, derbies and Chelsea boots – all of which originated on these shores.

But why is British shoemaking so revered, and what are the UK shoe brands you need to know? Read on to find out. 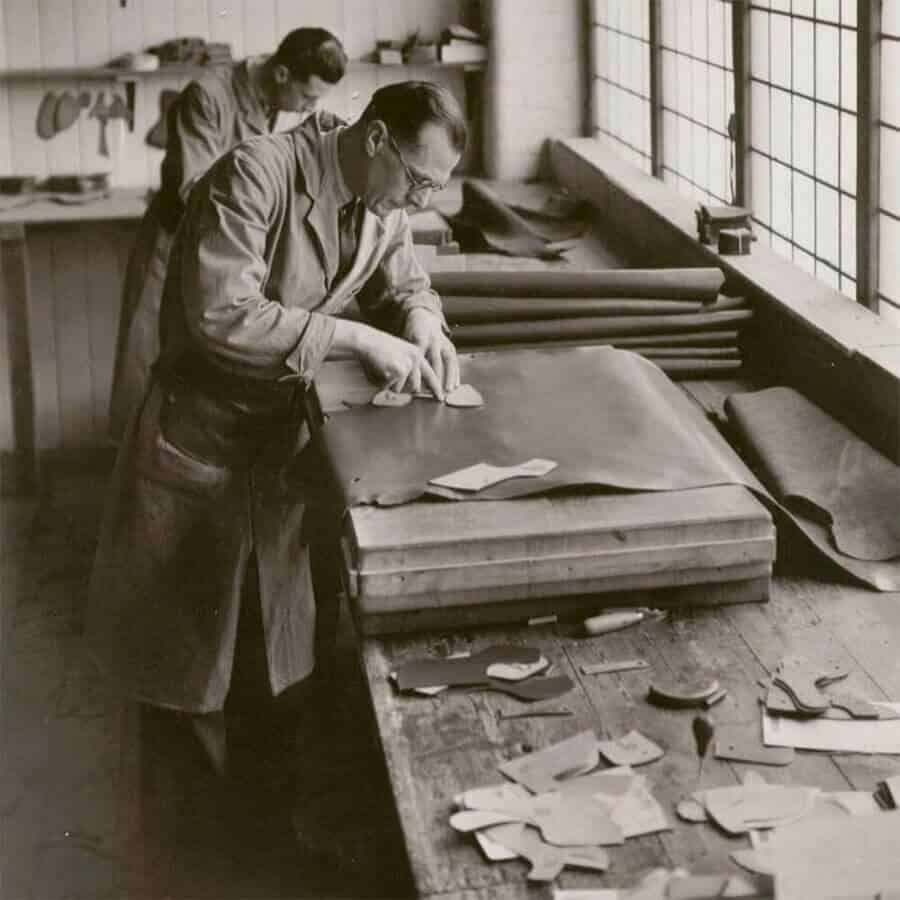 Britain, and specifically Northamptonshire, is arguably the home of shoemaking. The East Midlands county boasts the greatest concentration of traditional shoemakers found anywhere in the world, and has been host to the most skilled workers and traditional factories for hundreds of years.

Its history dates back to the Middle Ages, when Northampton was a market town that reportedly hosted King John and his son Henry III who bought shoes from its burgeoning shopping district. The town was the perfect place for shoe production as it boasted natural resources, including plenty of rivers and fresh water, oak trees and bark used for tanning, and access to cows for the leather. 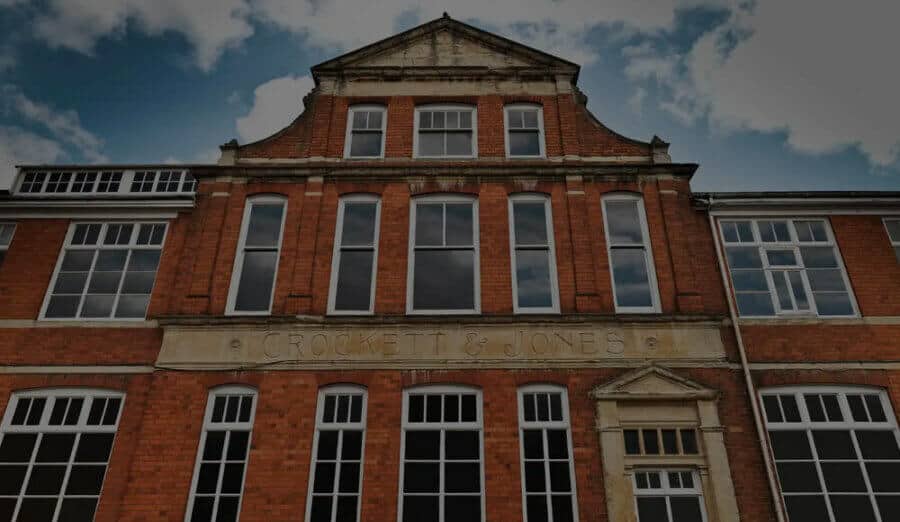 For centuries, specialised craftspeople managed their shoe production from their own homes, but with the arrival of heavy machinery including Singer machines and the Blake Sewer in the 19th century, factories became a necessity. By the mid 1800s there were nearly 2,000 shoemakers in Northampton alone, many of which continued to thrive throughout the two World Wars, producing hard-wearing leather boots for UK forces.

However, like the wider clothing industry, shoemaking suffered post war with the rise of cheap labour costs abroad and the increased use of synthetic materials. Today, a fraction of Northampton’s shoemakers are still around, but there’s still a large amount of choice – ranging from accessibly-priced, Goodyear-welted shoes, through to brands offering one-off bespoke designs. 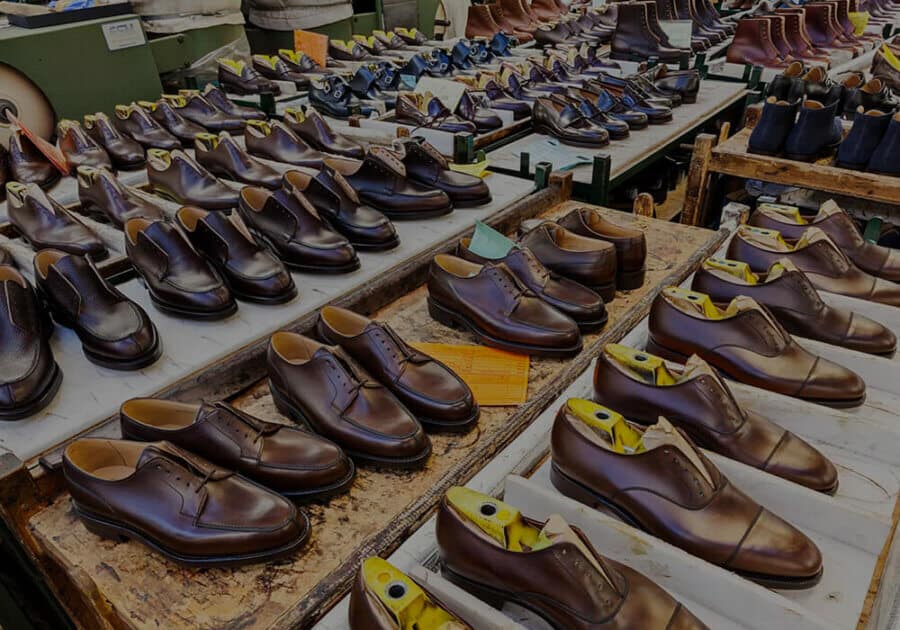 A range of quality shoes produced by Crockett & Jones

With unrivalled heritage and still producing in storied factories, British shoemakers today are thriving. The renewed interest in craft and the large demand for the best in leather shoes ensures there’ll always be a place for these specialised businesses.

But there’s no doubt that in order to survive many of them had to adapt. The shoe market isn’t the same today as it was 100 years ago, so even the most prestigious of shoemakers have had to switch up their styles while remaining true to their original visions. This means that historic brands such as John Lobb produce a line of sneakers alongside handmade Oxfords and leather boots, while Crockett & Jones now sells as many chunky commando sole derbies as they do the classic leather sole variety. 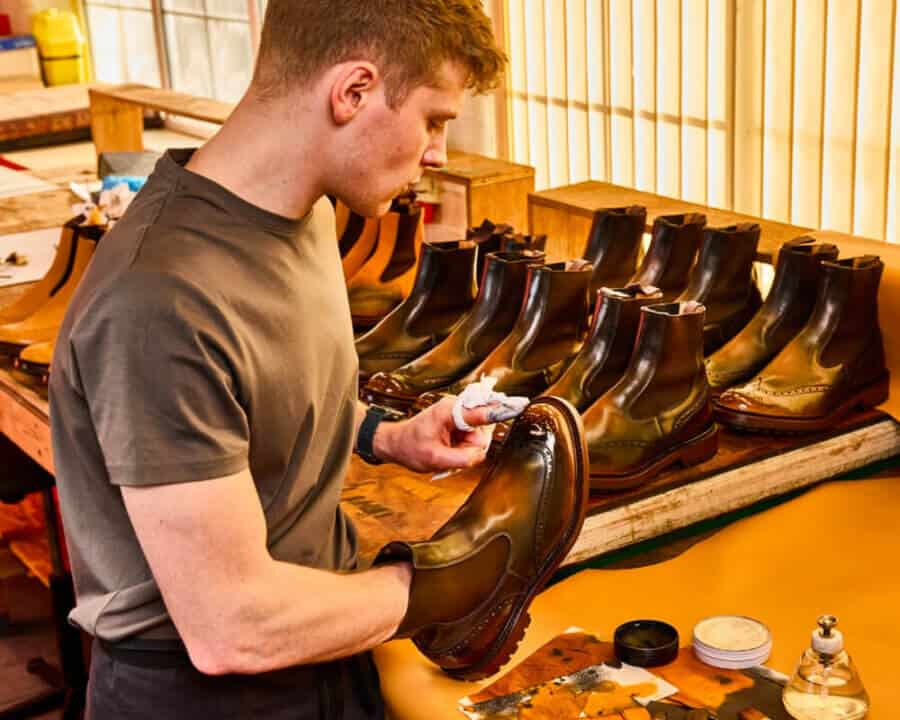 Hand polishing and finishing by a modern-day Tricker’s craftsman

There are other ways the industry has modernised, too. A number of shoemakers have turned to the fashion world’s model of collaborations, which put their product in front of a wider net of people. Classic names including Tricker’s and Cheaney have partnered up with everyone from streetwear brands through to high-fashion labels, producing limited-run shoes that flirt with hype culture, while staying true to the high levels of craft associated with Northampton shoemaking.

Then there are the shoemakers who’ve had to outsource production to other countries. The likes of Grenson and Loake do still produce their high-end models in the UK, but for the vast majority of their range they work with factories in Asia. This might rub some people up the wrong way but it’s a cold hard fact that manufacturing in the UK is prohibitively expensive, so it’s necessary for them to source cheaper labour. It also means you can secure a pair of British designed shoes at a more affordable price point.

One of the more contemporary shoemakers in this list in terms of design and branding, Grenson is arguably one of the most successful too. This is thanks to its wide range of styles, from chunky-soled boots to retro-styled sneakers, which appeal to a broad customer base.

Grenson has been in production since 1866 and it still makes its ‘G: One’ line in its historic Northamptonshire factory. It also manufactures other ranges in India, ensuring its contemporary designs can be sold at a lower, mass-market price point.

The sheer volume of styles it produces is impressive, and if you’re in the market for rubber-soled leather boots, few brands do it so well and for such a fair price.

Another household name, Loake has been around since 1880, producing classic, Goodyear-welted shoes at its factory on Wood Street in Kettering –  the same factory where it all started.

A family-owned brand with a Royal Warrant by Appointment of HM the Queen, Loake is known for its timeless designs that span loafers, Chelsea boots, brogues, oxfords and derbies. It also now produces its own in-house sneaker collection, which are popular with customers seeking something more relaxed yet still exquisitely made.

Many of its designs are still made in England but like Grenson, Loake also outsources production to countries abroad, which helps keeps costs down.

Church’s began humbly in a small workshop in Northampton on the 1st May, 1873. It went on to become one of the biggest and most reverred names in British shoemaking, eventually bought out by fashion house Prada in 1999.

Church’s is a huge company today, boasting stores in 16 countries as well as a series of high profile collaborations – most recently with streetwear label Off-White – which places it somewhere between the world of high fashion and old-school craftsmanship.

The brand continues to produce its wares in the UK and does the classics extremely well  – but its regular sneaker drops and chunkier, trend-led designs has widened its appeal to hypebeasts and traditionalists alike.

Founded in 1879, Crockett & Jones entered the market alongside a flurry of independent shoemakers hoping to make their mark on the footwear industry. Nearly 150 years later and it’s done exactly that, establishing itself as a major player and custodian of traditional British shoemaking.

C&J has never veered too far from its roots, but it has subtly and cleverly updated its roster to suit the desires of today’s consumer. Its range of classic designs is rarely bettered, but the brand also does a fine line in more contemporary silhouettes ranging from chunky, lug-soled Derbies through to unstructured loafers.

It’s also been the shoemaker of choice for 007 himself, with the brand gracing the feet of Daniel Craig’s Bond multiple times – a fine endorsement in itself.

Edward Green lays claim to being one of the greatest shoemakers Britain has produced. Starting out in 1890, its eponymous founder was obsessed with shoes and set out to manufacture them in a manner that was completely unrivalled. He largely succeeded, and in the years that followed the brand would go on to be worn by everyone from Ernest Hemingway to Edward, the Duke of Windsor.

Edward Green prides itself on the materials it sources, which range from French calf leather to the softest Italian suede, and its dedication to craft is unwavering, producing in the region of 350 pairs a week – a much lower figure than most other brands – allowing it to keep the quality consistently high.

Globally renowned for its quality and dedication to the finest materials, John Lobb is an iconic British brand. Shortly after its inception in the 1860s, Lobb was awarded the title of bookmaker to the Prince of Wales, a badge of honour it proudly wears to this day.

It was acquired in 1976 by Hermes, which help rapidly expand the brand to what it is today, with 19 stores dotted around the world, from London and New York to Dubai and Tokyo.

Still manufacturing exclusively in the UK, it offers a bespoke service for an even more luxurious experience, so you can commission almost anything your heart desires.

Tricker’s is the longest running shoemaker in England, having been established way back in 1829. It found its permanent factory some time later, in 1904 in the heart of Northampton, where it still makes its exceptional quality shoes to this day.

Tricker’s is renowned for its chunky, waterproof boots, which are arguably the finest you’ll find anywhere in the world. From black leather brogue designs to its Grassmere country collection, made from kudu leather, Tricker’s range of boots is unrivalled.

Like many brands on this list, Cheaney still operates from its original factory in – you guessed it – Northampton. Having been based at the same site since 1896, this is a brand with a heritage to rival all others.

A core supplier in the First World War, Cheaney produced around 2,500 pairs a week for the British army, making use of its advanced machinery (of the time).

The brand continues to manufacture exclusively in the UK, making use of its decades of experience in crafting premium quality Goodyear-welted shoes and boots.

Barker was set up over 140 years ago in 1880, where it, like many others on this list, aimed to produce the best shoes in the world. It still manufactures in the same town of Earls Barton today, producing its impressive range of leather loafers, derbies and boots from its Northamptonshire home.

Barker is renowned for its smart shoes and boots, which are crafted from a diverse range of premium leather and suede. The Bedale Chelsea boot is a particular highlight with its sleek silhouette and hi-shine calf leather finish. Goodyear welted and made on the brand’s sculpted 469 last, it’s arguably one of the finest takes on the iconic silhouette.