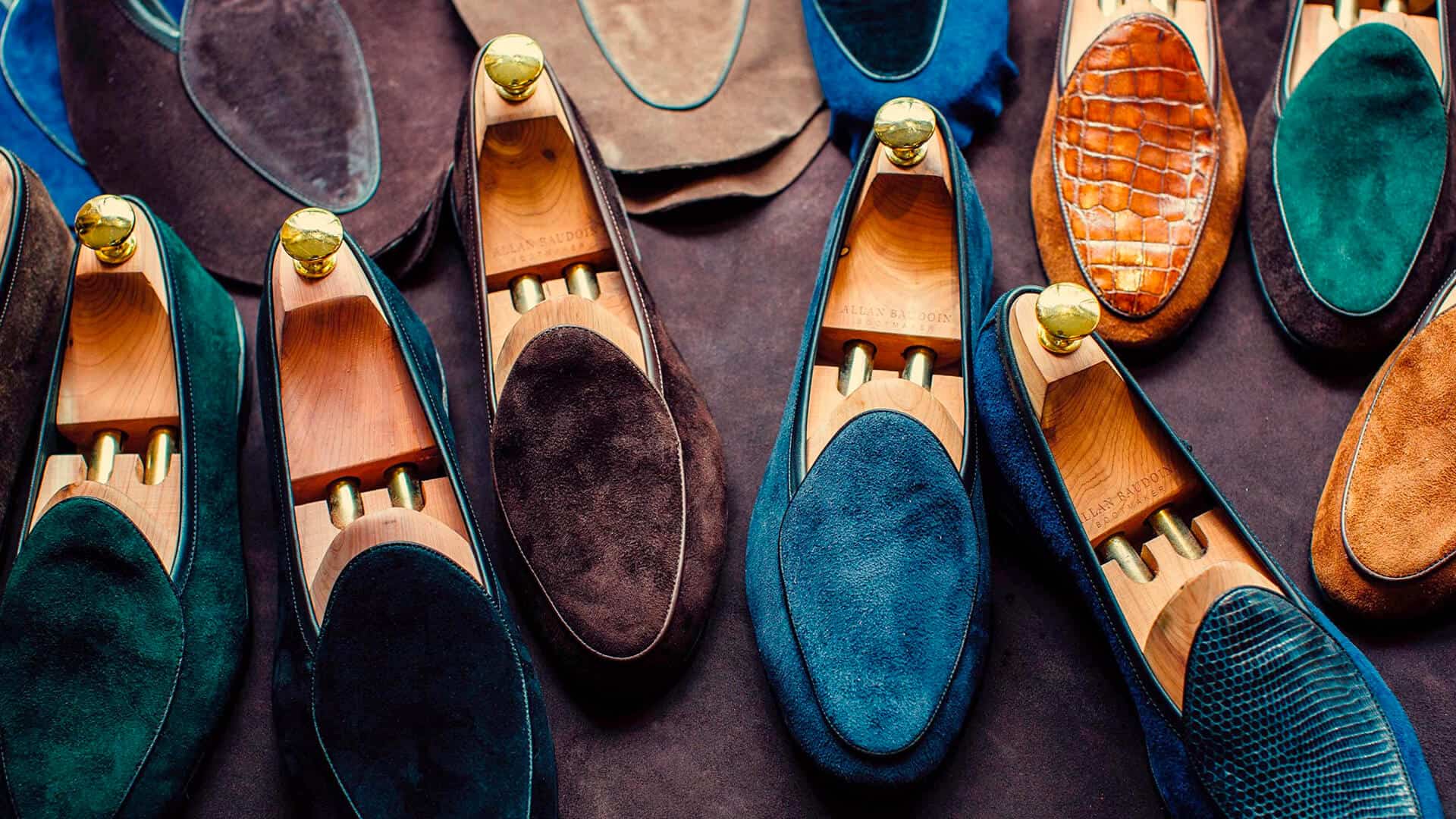 These hot-steppers boast some of the best shoemaking skills and heritage the world over.

Fine shoemaking is not typically a process one can reproduce en masse. By its very nature, it’s an artisanal craft that often requires decades of experience to perfect, and that’s before we even talk about the complex bespoke process.

Suffice to say then that there only a handful of truly luxurious brands out there that are dedicated to the craft. Many come from predictable places – the UK shoemaking hub of Northamptonshire, or Paris – whereas others new to the scene bring a fresh perspective on traditional styles.

Either way, the following list features some of the most revered shoemakers operating today.

Based in Northampton and founded in 1890, Edward Green is a British shoemaker of outstanding reputation, most notably for the classic styles. Green only makes about 250 shoes per week, given the amount of work that goes into each and every pair, and is especially lauded for its loafers – namely the Piccadilly and Belgravia styles, which are handcrafted using some of the finest French calf leather you’ll ever find.

Although it morphed into a fully fledged luxury fashion brand not all that long ago, luxury French marque Berluti has not forgotten its significant shoemaking heritage.

Renowned for its exceptional leather-making ever since it was founded by Italian Alessandro Berluti in 1895, Berluti was the place to go for exceptional shoes and was most recognised for its wholecut Oxford made out of a single piece of leather (its gradient tanning is still peerless, too).

Founded in 1886 in Northamptonshire (and still in the same factory is has been in since 1900), Joseph Cheaney & Sons can be counted as British shoemaking royalty, although at one point was wholly owned by Prada.

Now in the hands of two brothers committed to continuing the artisanal handcrafted legacy, Cheaney is making strides with an array of classic styles spearheaded by its peerless Oxford brogues.

Although a legacy British shoemaker, founded in Northamptonshire in 1873, Church’s is now under the Prada umbrella, a move that has not taken away any of the cachet for craftsmanship that made Church’s name and reputation over the decades.

While its Oxfords and brogues are exemplary iterations of the classics, Church’s ‘urban crossover’ styles replete with chunky soles are surprisingly modern for such a heritage brand.

Gaziano & Girling are a bespoke and made-to-order shoemaker specialising in the classic styles. Tony Gaziano and Dean Girling are the men behind the magic, and together they have created one of the most revered shoemakers in the world by mixing Italian lines and comfort with British craft and tradition.

They only select the very best French or Swiss calf leather and have it finished by the finest Italian leather finishing houses in order to achieve something close to footwear perfection. The burnished leather ‘Hayes’ is about as sexy as a shoe gets.

Father and son team George Glasgow Sr and Jr have positioned themselves as one of the world’s top shoemakers through sheer dedication to their craft. Cleverley’s prowess is in its bespoke experience, which is second to none.

There’s a beautiful nostalgia to its shoe styles, especially the slip-ons such as the single-buckle Ashford and Chesterfield or the tasselled Bexleys. If you’ve got the pockets for bespoke, Cleverley’s shoes will be friends for life.

Royal Warrant holder Tricker’s is another of the Northampton heritage brands plying a very fine trade in handmade shoes, priding itself on the 260+ processes that go into making each and every one.

But it’s perhaps Tricker’s outstanding reputation for boots that should be singularly recognised, especially its peerless Stow Derby ankle boot with its sleek yet rugged aesthetic and ornate brogueing, or its timeless Burford Derby boot with its minimalist styling.

Luxury bespoke British shoemaker John Lobb has been doing its bit for the ‘entente cordial’ ever since 1976 when Hermès acquired Lobb’s Paris workshop and boutique. That means that all of the brand’s custom orders are handmade in Paris, while the ready-to-wear collections are made in Northamptonshire.

Another of the Northamptonshire elite branch of shoemakers, Grenson’s pedigree stretches back to 1876 when it first started on its journey. Today, it’s probably best recognised for its epic boot and brogue styles, as well as an on-point contemporary sneaker collection.

If brogue boots with a countryside aesthetic are your thing, then there a few better brands to consider. If you prefer a more military-leaning aesthetic, Grenson have also got you covered with some stunning chunky styles for a rugged urban look.

Handmade Italian shoes don’t get much better than those that come out of the Santoni workshop. Founded by Andrea Santoni in 1975, the business is still family-run to this day, guaranteeing the same handcrafted expertise it made its name for.

While the brand makes excellent examples of all the timeless styles, it’s perhaps best known for its double-buckles, especially in loafer form. More recently it has really pushed the design envelope when it comes to sneakers and hybrids so if your personal style can be defined as ‘classic with a twist’, you’ll find plenty to get excited about.

Perhaps the patriarch of Italian shoemakers, Salvatore Ferragamo was the one who won over early 20th-century Hollywood with his comfortable shoe designs, while the company is probably best known now for its women’s pumps and ballet flats.

However, its men’s shoes are artisanal gold, especially the Oxfords. The shoemaker’s intertwining with fashion and ready-to-wear has also made it more forward-thinking than others, allowing it to develop modern twists on the classics, such as its chunky-soled derbies and eclectic sneaker range.

The late Stefano Bemer was a shoemaking maverick. Although he sadly passed away in 2012, his spirit lives on in his handmade, bespoke Florentine brand. Bemer also produces ready-to-wear shoes of the very highest quality, divided into Tradtional, Classic and Essential collections on a sliding scale of formality.

It’s difficult to say what type of shoe the brand is best known for because honestly, nothing that Bemer produces is anything short of exceptional and a tribute to handcrafted footwear.

Ever since it was founded in Limoges in 1891 (all of its shoes are still made there), J.M. Weston has been at the forefront of luxury shoemaking. Using a unique ancestral tanning process alongside traditional artisanal techniques, J.M. Weston’s reputation for immaculate footwear is among the best.

Weston’s relaxed Derby styles are perfect to bookend smart casual looks, but its Chelsea and jodhpur boots are truly a thing to behold.

Founded in 1990 by Pierre Corthay, his eponymous luxury shoemaking marque has made waves for its exceptional handcrafted shoes, but moreover it has found a niche for itself in developing unique patinas. Put simply: you’ll finds colours at Corthay that you won’t find anywhere else.

In 2008, Corthay was awarded the title of Master of Art by the French Ministry of Culture, which tells you all you need to know about his level of craftsmanship. His Derbys, Oxfords and monk straps perfectly combine the traditional with the avant-garde, so if you’re after a pair of shoes that will make a statement, this Parisian label should be your first post of call.

Tod’s is more than just a footwear company, it’s an Italian business institution and can be regarded as singlehandedly putting the driving moccasin on the modern menswear map.

Founded by the enigmatic Diego Della Valle, who expanded his grandfather’s basement shoemaking workshop into a global behemoth, today the brand is most widely recognised for its aforementioned Gommino driving shoe, cut in suede and calf leather and coming in the full kaleidoscope of colours.

Baudoin & Lange is very new on the scene compared to most on this list, but the small yet perfectly formed East London shoemaker quickly developed its niche and the reputation soon followed.

It was founded by former Apple exec Allan Baudoin, who was joined by former financier and race car driver Bo van Langeveld, both of whom had a shared passion for traditional sartorial handicraft. They struck upon the idea of reinventing the Belgian loafer for a smart contemporary audience who valued comfort as much as class, and hence the ‘Sagan’ was born.

Cut from the softest natural hides imaginable, the ‘Sagan’ slip-ons feel like slippers. The perfect smart summer shoe? It would be hard to argue otherwise.