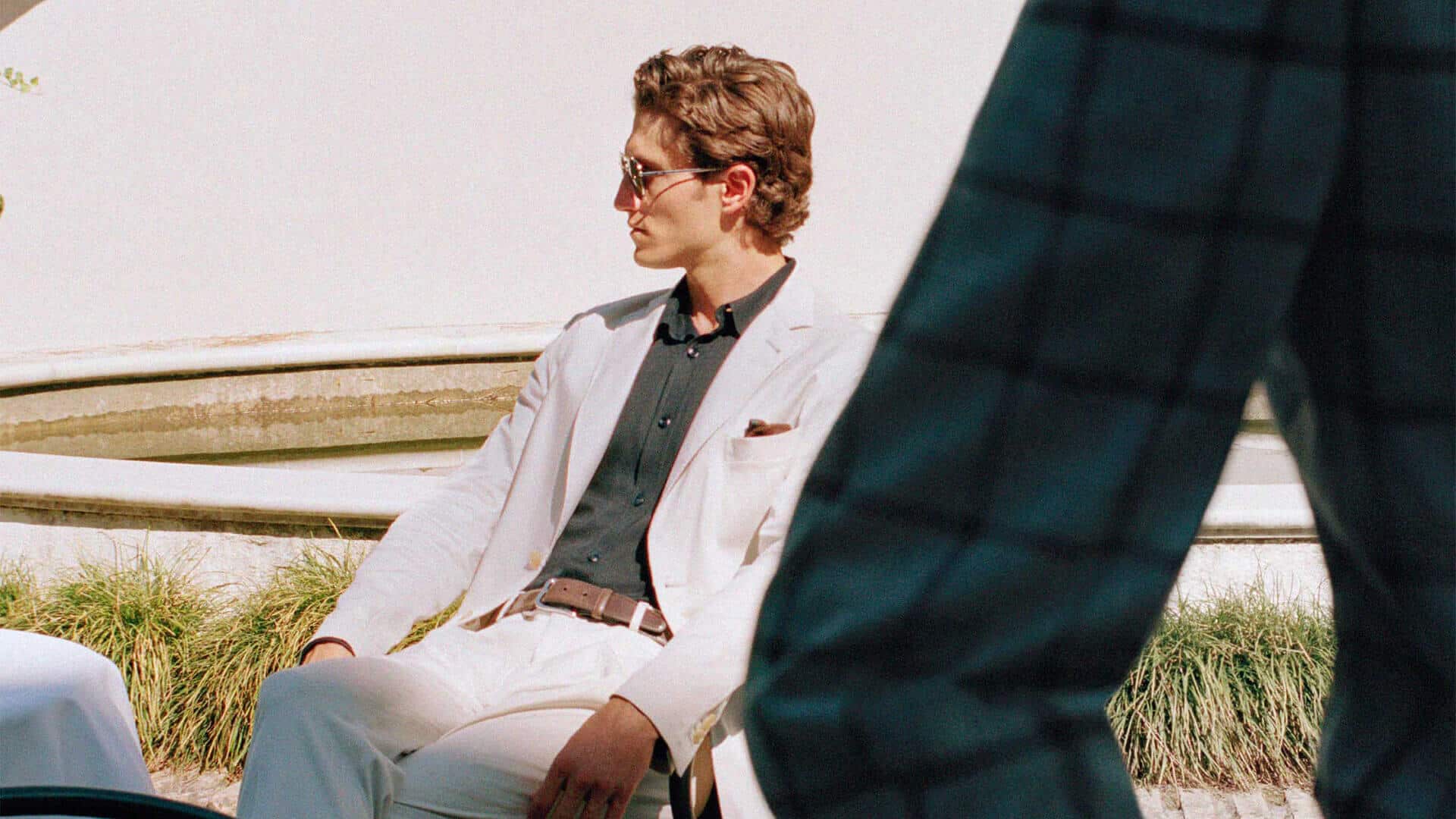 Italian Men’s Style: How To Dress With Sprezzatura

What is it about well-dressed Italian men that makes them look so effortlessly cool? We break down the key elements to their wardrobes and uncover the styling tricks that create an enviably nonchalant look.

If you want to know how to dress like an Italian, a good place to start is with tailoring. While many (we’re looking at you, the British) have traditionally approached tailoring like it’s a suit of armour – all structure, power and bravado – for the Italians modern tailoring means something else entirely: unstructured sophistication that is less about being ‘smart’ and more about casual sophistication.

They even invented a word for it: ‘Sprezzatura‘, which first appeared in Baldassare Castiglione’s 1528 The Book of the Courtier, where it is defined as “a certain nonchalance, so as to conceal all art and make whatever one does or says appear to be without effort and almost without any thought about it.” Call him ahead of his time – Castiglione was calling out try-hards in the 16th century.

Half a millennia later, that same studied carelessness continues to permeate through the discerning wardrobes of Italy’s menswear cognoscenti. As the late Savile Row tailor Hardy Amies once said about the Italians, “They have an air of masculine superiority softened with an almost feminine grace which has proved successful in the great game of sexual attraction.”

So how does one achieve the Italian look? ‘Studied carelessness’ is a bit of an art form but you’ll be glad to know that there’s a general blueprint to dressing like an Italian, combined with an attention to certain fine details that will underline the authenticity of the look.

It’s certainly true to say, however, that the Italian aesthetic morphs from the environs of Milan in the north to the sun-soaked lands of Napoli in the south. There are plenty of paradoxes you’ll have to navigate – Neapolitan tailoring, for example, is a world away from the more fashion-conscious Milanese, with the former preferring a classic British tailoring style, whereas the Milanese lean towards a more fitted, slimmer silhouette.

Nevertheless, what all stylish Italians share is an attitude towards dressing that bends rules and champions individuality. This is how it’s done.

One of the defining principles of Italian style is and has always been the use of unstructured tailoring. By unstructured we mean a jacket or blazer that has been stripped of all the padding, canvassing and lining so that it is lighter and has a more natural, relaxed drape. Given the intensely hot summers in Italy, this is completely understandable, and is the reason why cotton and linen jackets are a vital sartorial ingredient in the sprezzatura look.

This applies to both single-breasted and double-breasted jackets, the latter of which you’re more likely to find on discerning chaps from the Naples region. A soft shoulder and a lapel that rolls gently to the first button rather than being pressed flat are the fine details to keep an eye out for.

Similarly with trousers, Italian men aren’t afraid of the slightly roomier pleated styles, which have a more relaxed air about them.

Build from the blazer 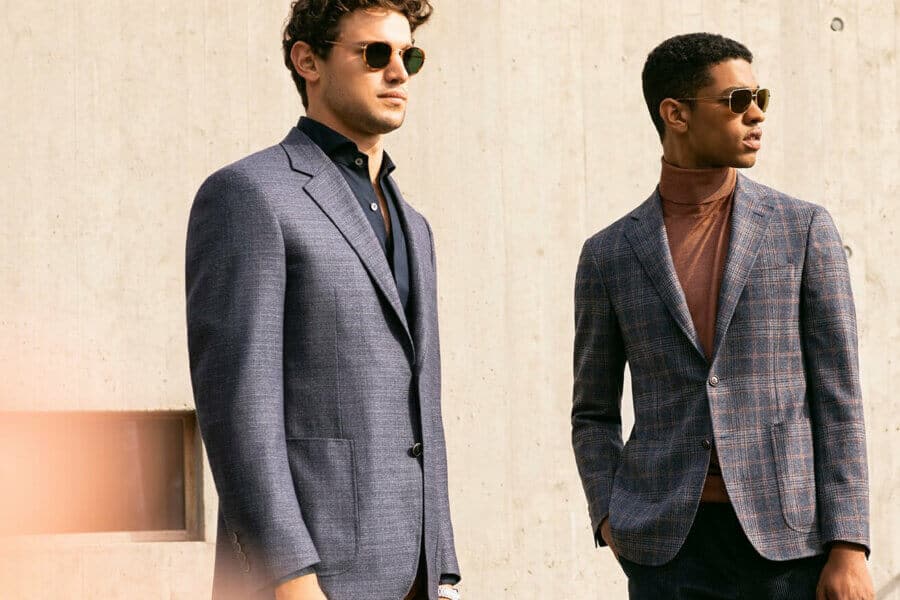 If you want to achieve the suave Italian look but are not sure where to start, then we suggest you build out from the blazer, which is the critical item around which you can create stylish combinations.

Whether it’s a navy flannel blazer or a heavier herringbone sports coat for winter, choose an understated jacket that improves on your wardrobe’s versatility, rather than opting for something flashy or gaudy.

Your accessories have the licence to add colour and pattern, while your jacket should be the picture of understated elegance. Building a wardrobe predominantly based around a neutral colour palette makes looking consistently cool a whole lot easier to do.

For many of us, the word ‘tailoring’ intrinsically triggers the notion of dressing smart and often at the expense of comfort, but this is one trade-off Italians will not stand for, hence their predilection for separates.

Separates (or ‘spezzato’, as they are referred to in Italy) offer the best of both the smart and casual worlds, and give you myriad styling options throughout the year. In the summer pair lightweight linen blazers with the workhorse of Italian style, white chinos. In winter switch out the cotton jackets for tweed, herringbone or houndstooth cloths. 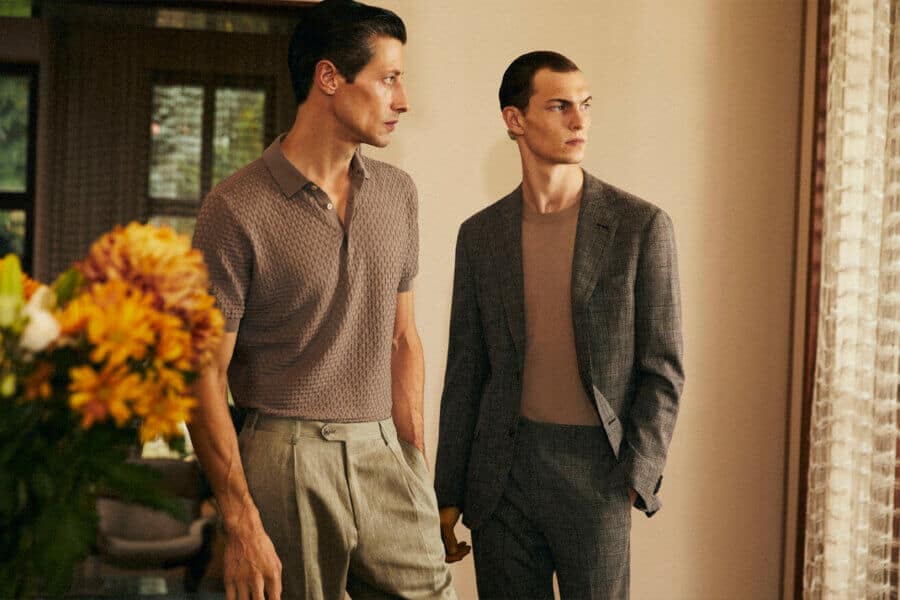 Before you start unbuttoning your shirts down to the navel, dressing down a suit can still mean wearing a collar and tie. But rather than a stiff-collared business shirt, swap it out for an Oxford button-down and knitted tie for a much more relaxed sartorial effect.

Of course, you can ditch the tie altogether as many stylish Italians are wont to do, but ensure that your shirt has a soft roll in the collar for that nonchalant look.

Otherwise lose the shirt altogether and opt for a knitted polo shirt or merino tee. Anything more casual and you veer into preppy territory, which is no bad thing, but not essentially Italian.

Do sweat the details

God is in the details when it comes to the sprezzatura vibe. Small details can add the authenticity you need to pull the look off so don’t underestimate them.

A lazily stuffed pocket square in a blazer breast pocket; a neatly tied neckerchief in the summer; a selection of bracelets and necklaces; a fine timepiece with a carefully chosen strap… all of these add degrees of the flare and individuality that underline the Italian aesthetic. They show you care about the little things without being ostentatious.

Get a head for hats 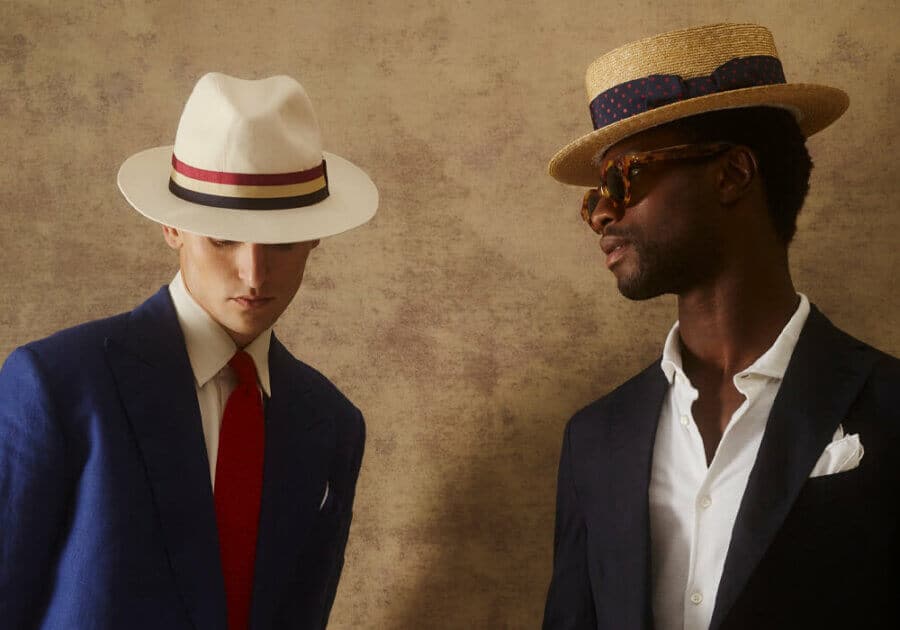 While most of us are no strangers to caps and beanies, when it comes to broadening the scope of our headgear, we’re quick to wind our necks in. Sophisticated Italians, on the other hand, are not shy when it comes to topping off a casual linen suit with a flat cap, fedora or trilby.

In the not too distant past, men wouldn’t leave the house without a hat, such were they part of the day-to-day uniform. A beautiful felt fedora is the cherry on the cake with a flannel suit, or perhaps a bakerboy cap to add some texture and pattern to some winter separates.

If there’s anything that’ll set you apart from the crowd, it’s a quality hat.

Mix in some workwear

In the opus of Italian sartorial panache, it’s not always about the tailoring. Indeed, you’ll often see stylish types mixing up elements of workwear in their wardrobes to present a more off-duty look.

Swapping out a blazer or sports coat for a traditional four-pocket chore jacket, field jacket, suede bomber or denim trucker is a great way to balance, say, a pair of smart pleated trousers and loafers.

Conversely, go with a smart unstructured blazer, shirt and tie up top, but juxtapose the trio with some khaki combat trousers and suede chukka boots. 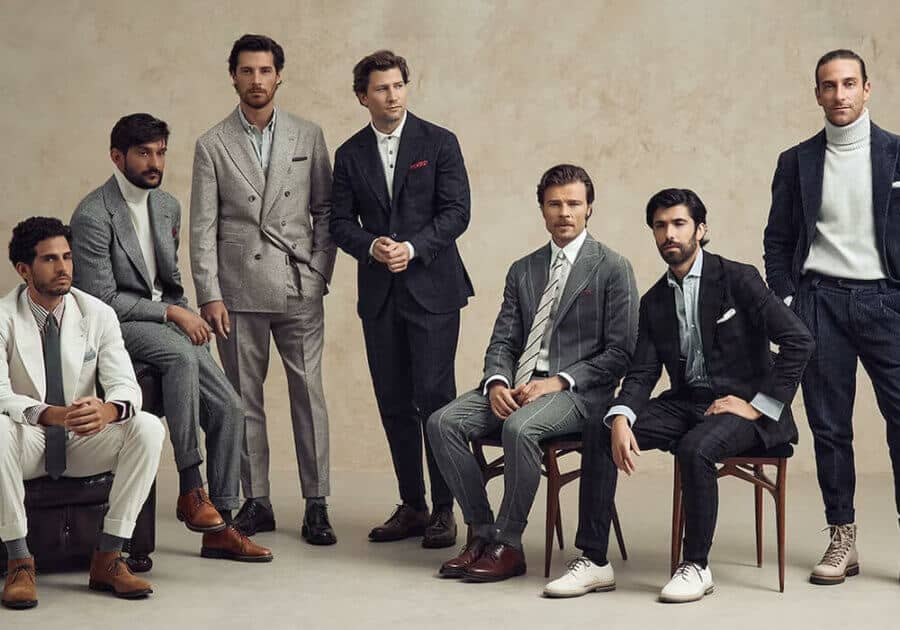 You’d think that the further south in Italy you went, the more casual things would get but you would be wrong. In Naples, where there is a long and proud tailoring tradition, the style is much more like the classic British sartorial aesthetic, albeit with more generous proportions in the jackets and less, if any, canvassing.

You’ll find the Neapolitan jacket style with relaxed shoulders and a pronounced roll in the substantial lapels, while the silhouette is typically longer than most off-the-peg suits. That said, every Neapolitan tailor has his own specific house style so it’s worth getting to know them all before committing to one.

While the double-monk shoe is often seen on the feet of the well-heeled Pitti Uomo crowd, we would be remiss not to speak of their more casual cousin, the loafer, because they play such an important role in the Italian’s shoe rotation. More suited to the Italian climate than, say, Oxfords or Derbies, the loafer has that unique amalgam of smart and casual that perfectly complements sprezzatura style.

Whether you opt for a tassel design or penny loafer, you can wear them with a luxury suit, relaxed separates or some tailored shorts in the summer. Try tan styles with white chinos for a chic summer outfit. If you need something smarter to pair with a suit, the aforementioned double-monks will do very nicely. 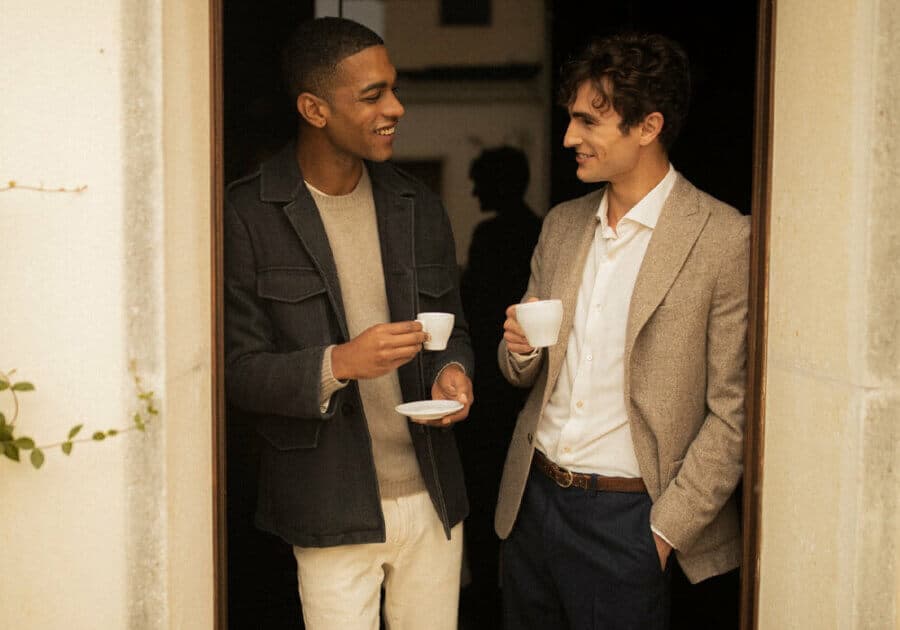 Despite the flamboyant Italian personality, replete with its theatrical gesticulations, you’ll find that the best dressed are loathe to embellish their look with swathes of gaudy colours. Instead, they maintain a neutral palette for the most part, and use discreet pops of colour, whether it be a neckerchief, pocket square or quality tie, to make a quiet statement.

Pastels, greys and beige tones help you to create an easy contrast with darker or bolder hues.

A little dishevelment is a good thing

Looking too polished says that the wearer is over-concerned with his appearance, which is the exact opposite of the definition of sprezzatura. As Hardy Amies once said, “A man should look as if he had bought his clothes with intelligence, put them on with care, and then forgotten all about them.”

Taking that concept a little further, many stylish Italians add their own touch of casual dishevelment which provides a certain Mediterranean rakishness. A jumble of necklaces, or lazily upturned shirt cuffs, or perhaps a pair of battered suede boots gives a sense of loucheness and confident disregard.

The navy blazer is king 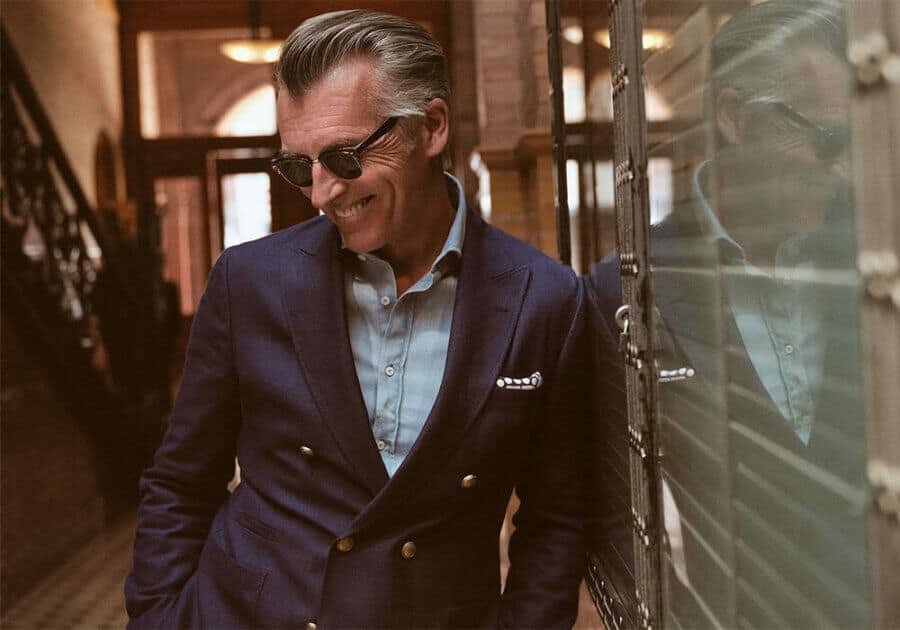 The navy blazer is a non-negotiable menswear garment, but when it comes to dressing the Italian way it should reserve a special place in your wardrobe. Whether single-breasted or double-breasted, the navy blazer brings some tailored formality to your look thanks to its military uniform heritage.

Rather than dress it up as a suit however, discerning Italians will instead contrast the blazer with white or neutral tone chinos to take the formal edge off it. The DB navy blazer leans on the smarter side of the spectrum and is the perfect canvas for a pastel tone shirt and knitted silk tie.

As for the blazer itself, ensure you opt for an unstructured style to keep the drape soft and natural. For double-breasted styles, look for peak lapels with some substance to them, while single-breasted options in worsted wool or knitted designs for winter and cotton or cotton/linen blends in the summer are ideal.