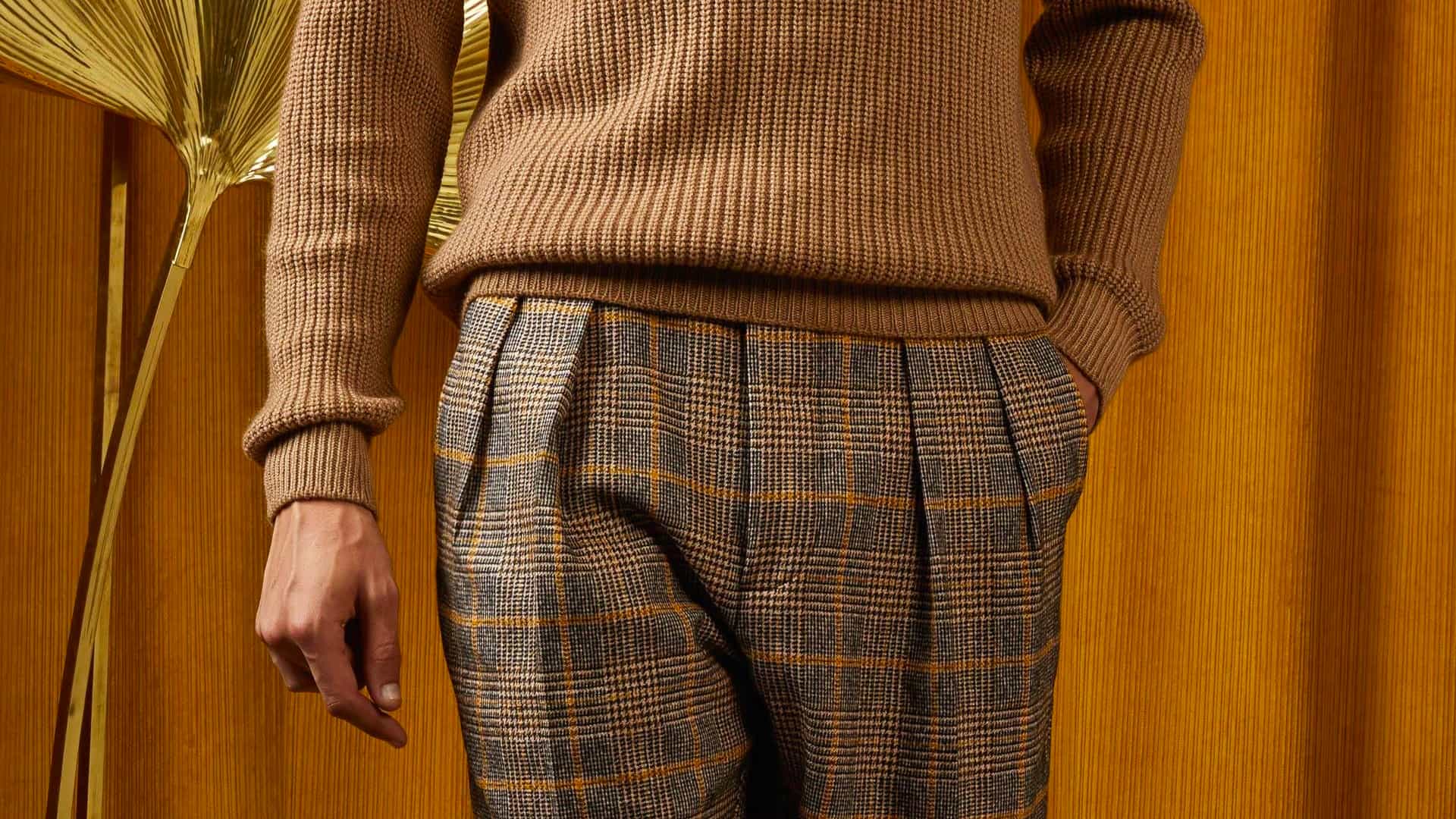 Having spent many a decade in the shadows of their flat-fronted cousins, pleated trousers are striding back on the menswear scene.

If you have a keen eye (or just follow well-dressed men on Instagram), you may have noticed the re-emergence of pleated trousers in recent years. We say ‘re-emergence’ but they never really went away, instead swinging in and out of favour with some menswear tribes, while others (the aforementioned stylish gents) continued to wear them with the fervour of nostalgia and contemporary individuality.

And while the pleated trouser will never usurp its vanilla cousin, the flat-fronted trouser, you can be sure that it will remain a sophisticated option as long as the runways of the big fashion houses continue the affair (there looks to be no signs of abating on that front). Here at Men’s Flair, we love a pleated trouser – that sharp crease that runs all the way up to the waistband, the slightly roomier waist, the casually tailored air of sophistication… what’s not to like?

If you’re on the same page, then read on to find out what you need to consider if you want to add a pair to your own rotation.

A brief history of the pleated trouser 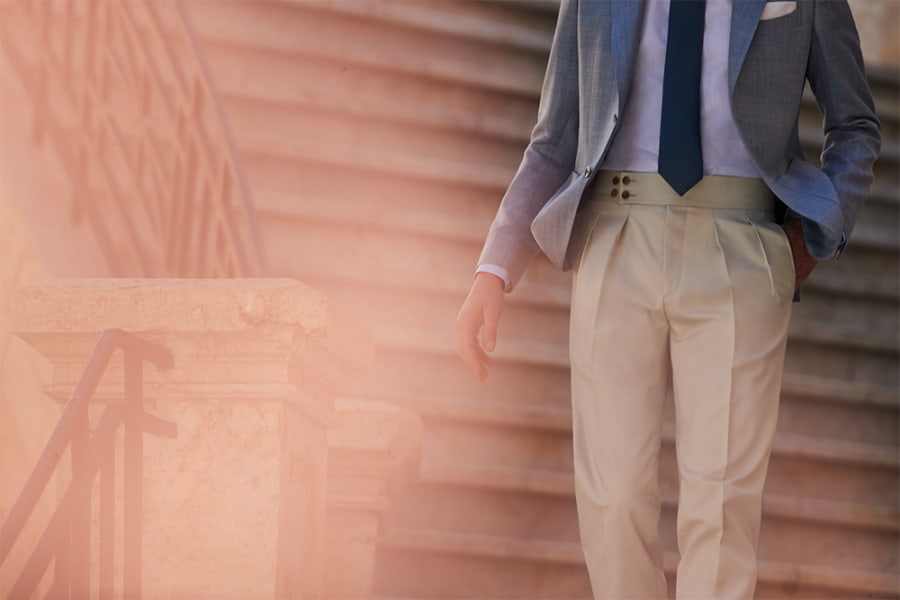 Sartorial folklore has it that the originator of the pleated trouser was a Danish man called Lars Larsen, a tailor of great renown who moved to Paris in the late 19th century to found his own atelier, which went on to become one of the most prestigious in the entire city. Mr Larsen is credited with inventing the open pleat (and some sources also say he was the first to introduce front darts on men’s jackets).

For decades, the Victorians had worn flat-fronted trousers, so Mr Larsen’s neat little folds were quite novel but fast gained popularity as sports such as tennis began to influence menswear. City trousers with turn-ups started to appear from about 1910, a habit from the cricket field, then came Mr Larsen’s open pleats shortly thereafter.

What to consider when buying pleated trousers

Today’s pleated trousers are not all that different from the one’s Larsen was cutting all those years ago. Back in the early 1900s, you would have caught a few frowns if you had turned up to a smart event in a pair given their more relaxed aesthetic, but these days the pleated trouser moves in whichever sartorial circles it prefers.

Pleated suit trousers are perfectly acceptable – in fact many view them as a smarter alternative to flat-fronted styles – just as pleated shorts can be sophisticated and casual all at once. There are a number of pleat configurations you should know about however, before you consider buying a pair. 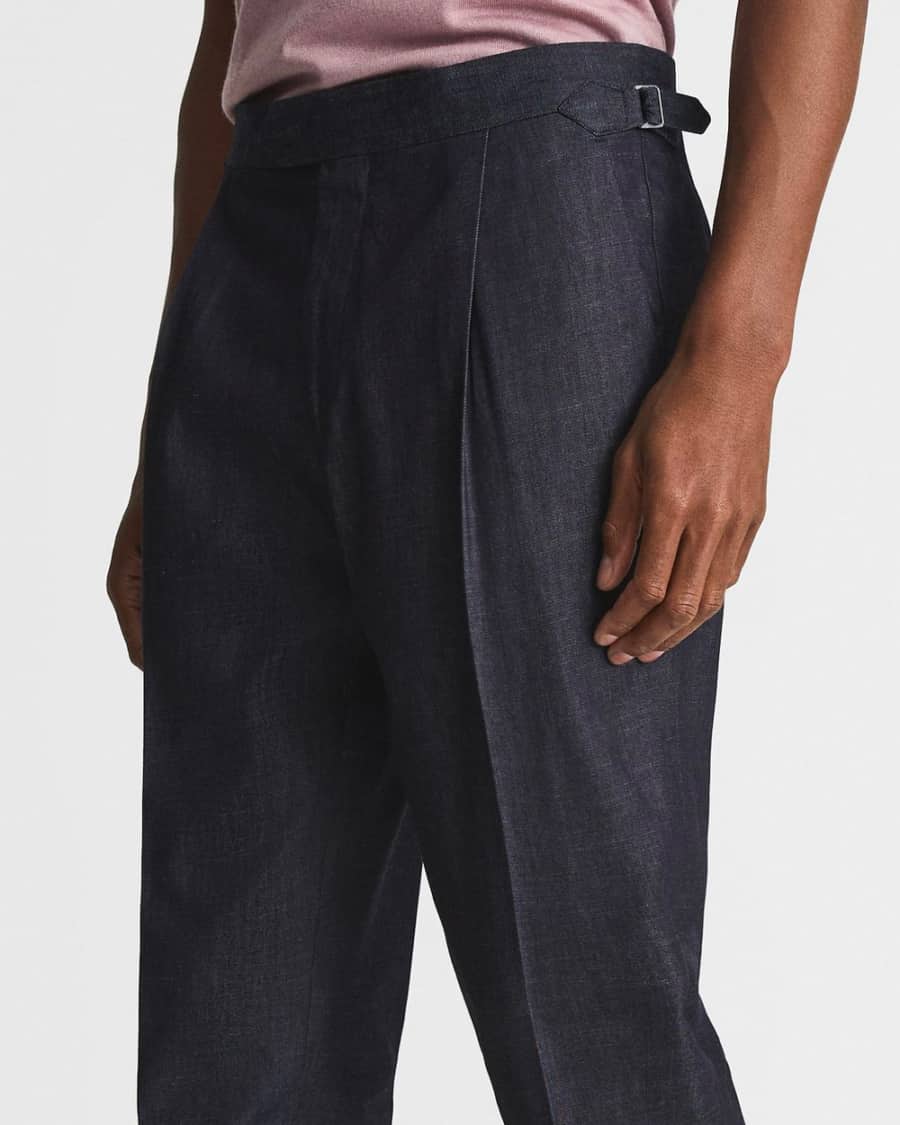 The single pleat is exactly that: one pleat running down the centre of each leg. It is typically subtle and often barely noticeable to the untrained eye but it affords the wearer that little extra comfort about the waist. 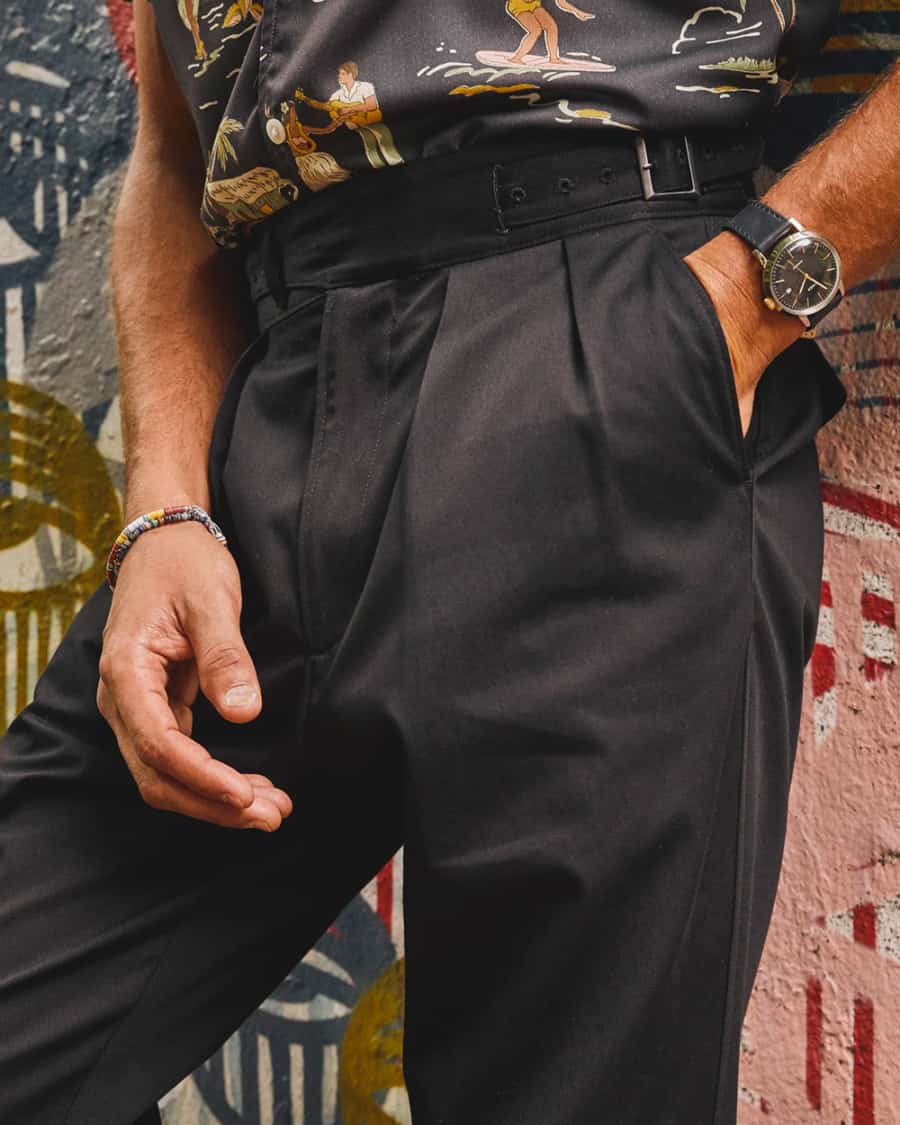 A second pleat is sometimes added to the first (and occasionally you may even come across triple pleats). It is always smaller and sits between the first central pleat and the trouser pocket. It’s function is to once more add more room about the waist, but also offers a visual point of interest.

The downside to more pleats is that the excess cloth will gather when you sit down, but if this doesn’t bother you then go ahead. 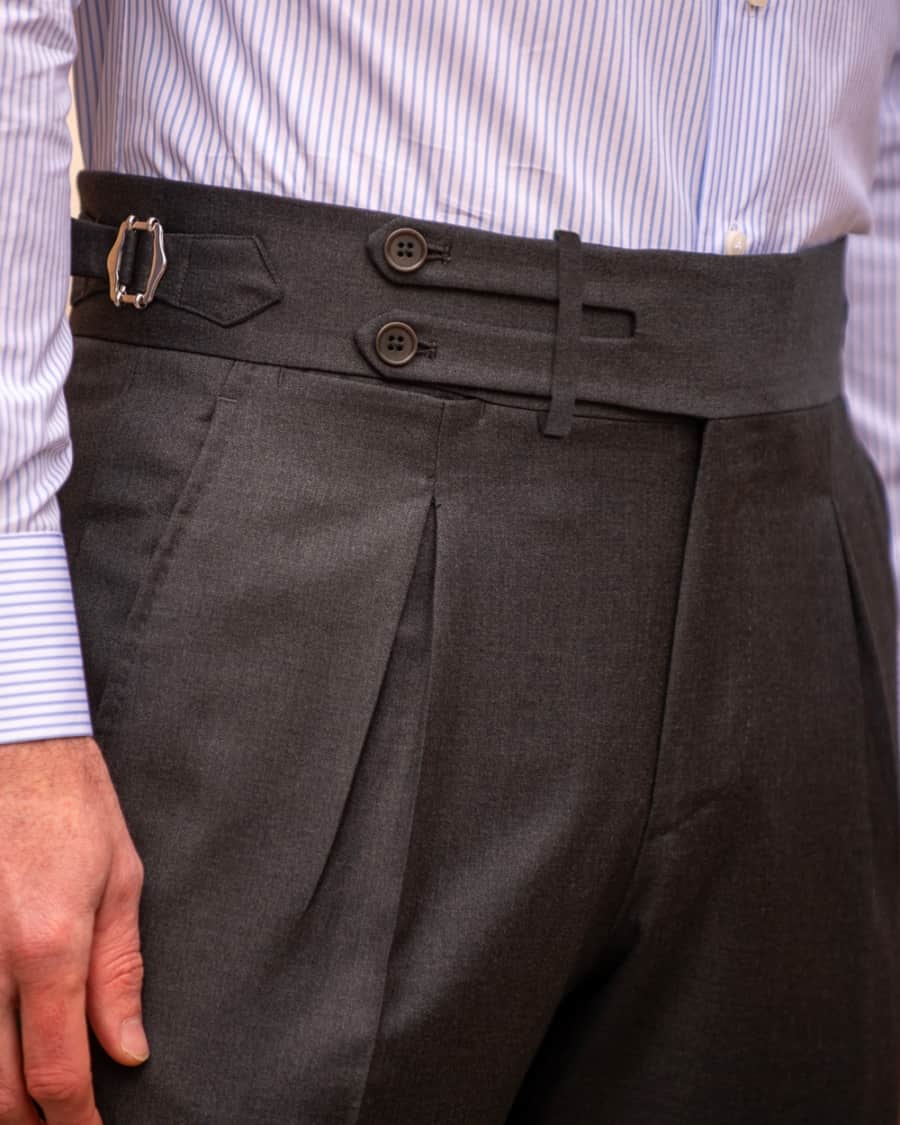 Pleats can face one of two ways: backwards or forwards. In the case of the former, the excess of material is gathered towards the rear of the trouser, whereas the reverse is true for the forward-facing pleat. 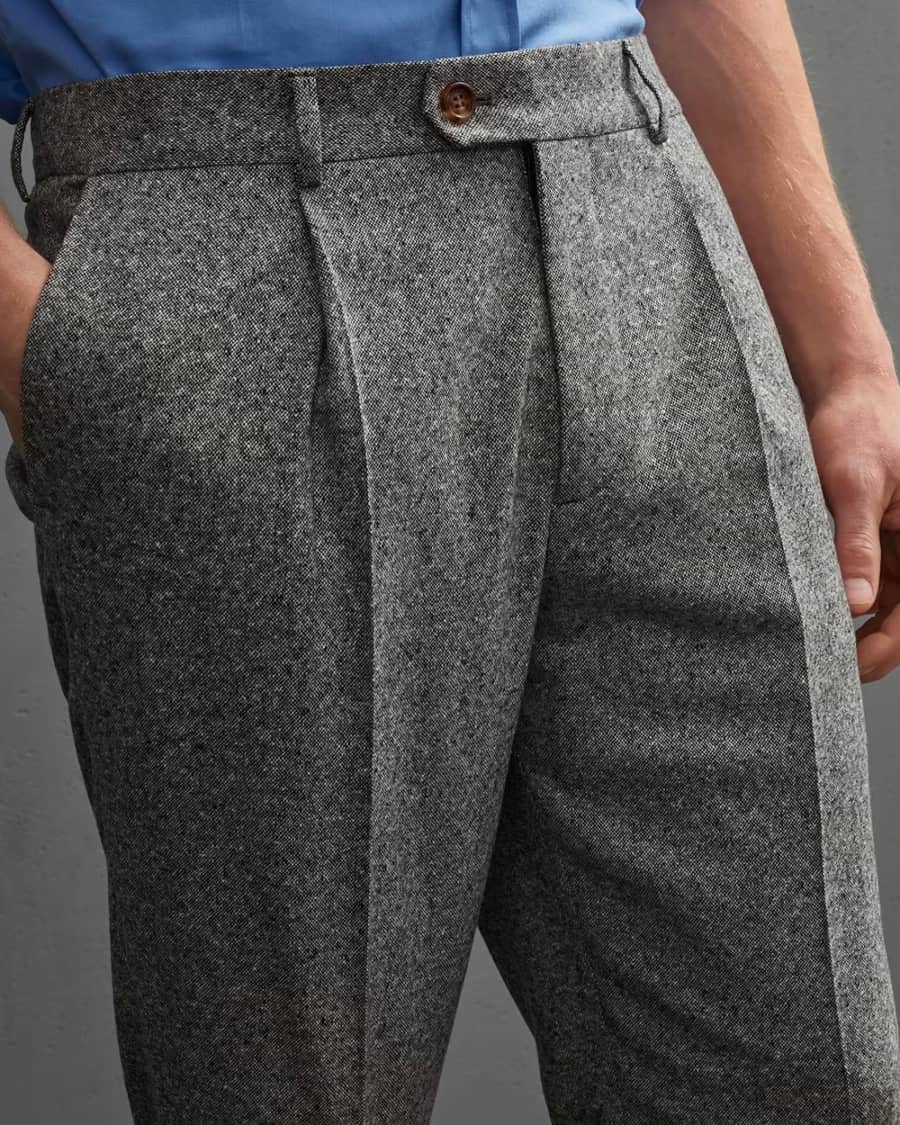 Fabric should always be foremost among your considerations when shopping for tailoring but especially pleated trousers, since they work considerably better when applied to dense cloths such as superfine merino and other worsted wools. That’s because the pleats appear that much sharper than, say, cotton.

Worsted wools drape nicely, which gives the pleat more weight to sit sharper on the leg. Cotton chinos on the other hand can look messy when the pleats begin to open up and loose their fold.

The best pleated trouser brands in 2022

The much-loved French brand founded by Alexandre Mattiussi has been a visible proponent of the pleat ever since he founded his label in 2011. From cropped carrot pants to wide-leg styles, AMI’s collections are never far off a pleat or two, and always executed in a cool contemporary fashion in rich woollen yarns.

There are pleated trousers and then there are Issey Miyake pleated trousers. The famed Japanese designer has long had a love affair with pleats, hence his Homme Plissé collection which almost entirely consists of them.

Miyake’s approach eschews the traditional tenets of trouser tailoring in favour of a much more contemporary angle, constructing his cropped trousers entirely of pleats. It’s a strong look, but one that adds a unique luxury touch to a relaxed modern wardrobe.

Giorgio Armani in the 80s was all about the strong, masculine contours of the power suit. But after the Wall Street crash, the Italian maestro similarly reduced his suit proportions, creating loose, relaxed tailoring with a silk pyjama-like drape. Naturally, pleated trousers were a key element of this new easy-going silhouette as he needed to gather up the excess fabric around the hips and waist to ensure the trousers sat correctly.

Armani is still today a fantastic proponent of pleats, as you would expect, especially the reverse pleat which is more commonly favoured by Italian tailors.

Consistently elegant season after season, American designer Tom Ford has always been partial to a pleat in his suit trousers, as well as his more casual styles such as cotton and corduroy chinos.

Ford typically sticks to a dark colour palette and autumnal hues so he’s an especially good destination for fall and winter wool styles.

Founded by Pierre Mahéo, Officine Générale is everything you would expect a modern tailoring-centric Parisian brand to be. Effortlessly cool and uncompromisingly sophisticated, the label designs relaxed tailored classics using an understated colour palette.

Pleated trousers play an important part of its seasonal collections, taking the edge off the formality of smart office looks and allowing much more versatility when it comes to styling them for the weekend.

Minimalist and modular, Lemaire is a Parisian philosophy as much as it is a brand. Founded by Christophe Lemaire and Sarah-Linh Tran, Lemaire is uncompromisingly minimalist, sticking to a very tight colour palette while experimenting with soft-draping voluminous silhouettes with a nod to classical Asian references, as well as military and workwear influences.

Its pleated trousers are fluid and dynamic and a beautiful expression of modern tailoring that you can wear in a very contemporary way.

MR PORTER has been curating a vast and sophisticated menswear offering from the world’s finest clothing brands ever since it went live in 2011, so there’s no surprise that it’s one of the best online destinations to search for pleated trousers.

But you needn’t look too far from the retailer’s own in-house brand, Mr P, which has impressed with it’s high-quality sartorial style. Naturally then, pleated trousers play an integral roll in every collection, with some consummate suit trouser styles you’d be remiss not to seek out.

Although Italian tailoring brand Lardini might not have the centuries-old heritage of some of the legacy Italian houses, the label founded in 1978 has wasted no time in making a global name for itself thanks in no small part to a desire to modernise and experiment with classic Italian tailoring shapes.

Therefore, Lardini sits in the sweet spot between smart and casual, replete with a cast of rich textures and flattering silhouettes. This is exemplified by its seasonal array of pleated trousers, which would be well worth your perusal.

The British brand founded by David Keyte has generated a cult following over the years for its unique take on traditional workwear silhouettes. You won’t find smart pleated trousers here but rather wide-legged casual pleated styles, adding a cool sartorial detail to a relaxed, modern trouser shape.

How to wear pleated trousers

There’s no great secret to wearing pleated trousers and you can think of them in both a suit and separates context. We love a pleated trouser as part of a suit as it offers something different from the svelte and business-like flat-fronted norm. When worn as separates however, they come into their own, being able to be dressed down with a tucked-in tee to make the fold more apparent.

Naturally, you want to wear any jacket or blazer unbuttoned in order to make the most of the pleated trouser. More recently, a wider, roomier cut has appeared on runways and while they might not be the sartorialist’s predilection, the way they juxtapose classic tailoring with a contemporary silhouette is really effective.

One reason to ditch the jacket altogether is the fact that the pleated trousers are roomier around the hips and hence make your waist look that little bit thinner, which is never a bad thing.