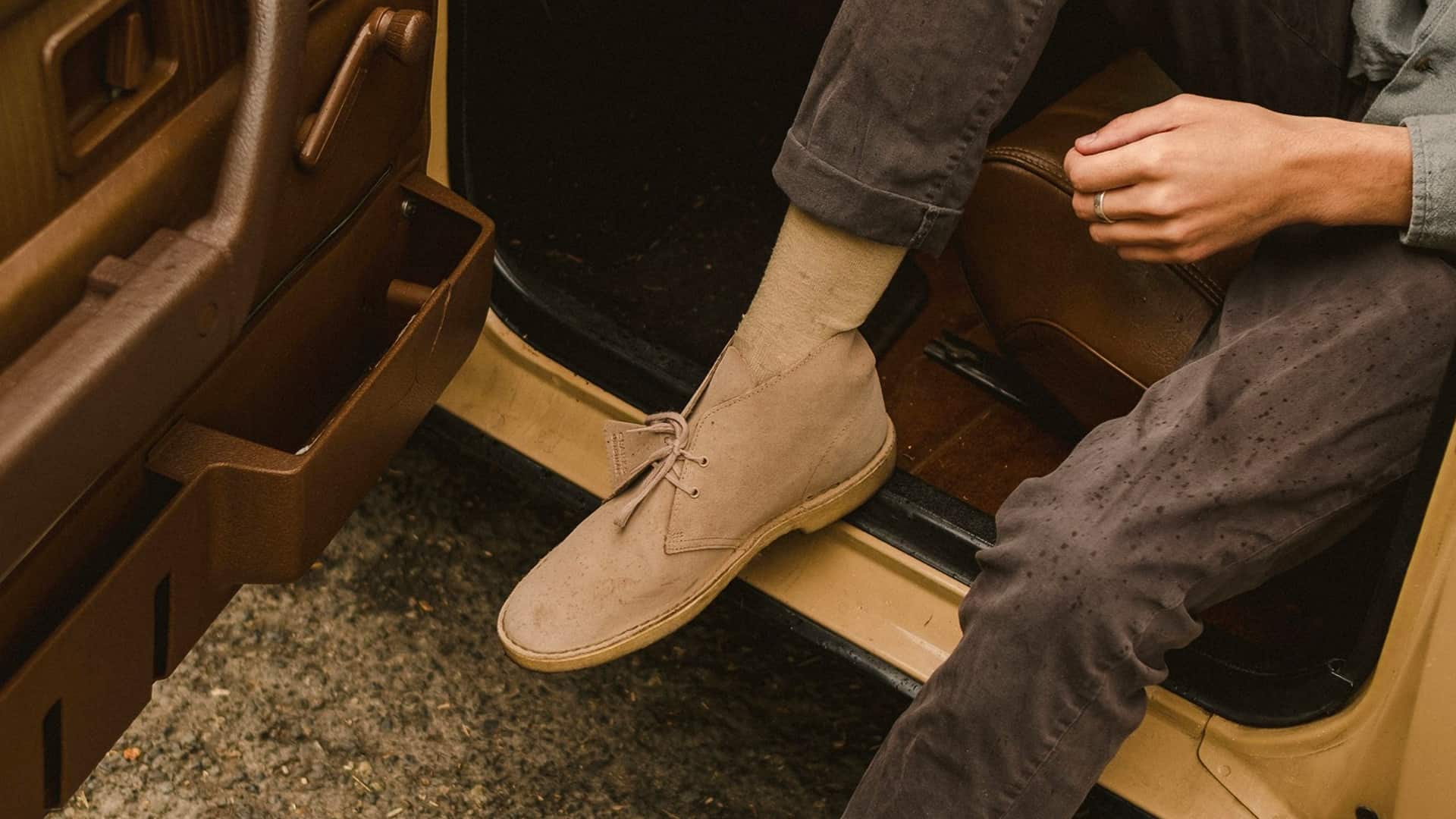 The Best Suede Boots Models For 2022

This year's must-have suede boots, from timeless classics such as the chukka and Chelsea to contemporary jodhpur and military styles.

Suede is often thought of as a sensitive fabric, something you shouldn’t wear in the rain, but when it’s applied to boots, the rugged cousin of shiny calfskin is a whole different animal, taking on a textural and tactile aspect than can be smart or casual depending on the style.

We’ve curated a list of this season’s must-have iterations, from timeless classics such as the chukka, to much more contemporary versions.

If we’re talking suede boots, first up on the list has to be Clarks’ desert boot, aka the ‘chukka’. The original and still the best, Clarks is still the go-to brand for chukkas, the origin of which goes back to 1941, when one Nathan Clark was stationed in Burma with the British military.

He observed that the local military men wore crepe-soled rough suede boots as part of their uniform, and discovered that they came from a bazaar in Cairo, Egypt. So he picked up some pairs, took them back to Somerset, and four years later launched a suede boot that has become an all-time classic.

Chukka boots are extremely versatile summer shoes that tend to get better with age. They’re a natural fit with khakis, chinos and denim, but also combine well with tailored shorts.

Clarks has been producing iconic shoes for 197 years, and while the aforementioned chukkas probably take top spot on its list of icons, the suede Wallabee isn’t far behind. It had a resurgence in the 80s when it was the premier footwear choice of UK ravers, but now it’s just a great all-round casual shoe that marries easy style with comfort.

Available in both shoe and boot form, Clarks have created a tonne of new styles with little design twists here and there, but the silhouette still remains true to the original.

Red Wing takes its name from the town in Southwest Minnesota where the company was founded in 1905, and has been producing solid, artisan-made workwear boots ever since. It’s most famous for its iconic Moc Toe styles, which it produces in a number of different waterproof leather versions including suede.

In fact, we think the Classic Moc Toe 8881 in a light tan suede upper is the very definition of cool Americana, and something you’ll be kicking around in for many years to come, such is the build quality.

As far as hiking boots go, nothing touches Diemme’s signature Roccia Vet for style and functionality. They are a bona-fide walking boot, built to last and eat up the miles, but at the same time they have been styled with an Italian eye so that they complement a modern city wardrobe.

Made in Italy at the Calzaturificio Diemme factory in Onè di Fonte, Veneto, the suede styles are a great way to add a rugged element to woollen tailored trousers throughout fall and winter.

Australian footwear icon R.M.Williams handcrafts a number of stunning boot styles but for us, one of the very best is the Craftsman boot, an iteration of the traditional Chelsea boot. While Williams produce many sumptuous calf leather styles, the suede version is that little bit less formal.

Constructed by hand in its Adelaide workshop from a single piece of suede, it features a chisel square toe, double branded tugs and a rubber plain welt sole for durability.

There are few boot styles that can be recognised from a hundred paces, but Saint Laurent’s Wyatt model is certainly one of them. Leaning into the French fashion brand’s penchant for a rock ‘n’ roll aesthetic, the Wyatt is actually available in a classic Chelsea, Jodhpur and Harness boot, all of which are crafted in 100% calfskin leather with a whopping 1.5-inch heel.

Common Projects are better known for completely reinvigorating the minimal sneaker industry all those years ago when it released its Achilles Low model to much acclaim. Proving it’s far more than a one-trick pony, the brand has subsequently released a pair of Chelsea boots featuring soft contours and a comfortable gum rubber sole that is perfect for elevating a pair of tapered jeans or summer chinos.

One of the iconic heritage brands of the Northamptonshire shoemaking industry, Grenson was founded in 1866 and has been at the forefront of luxury footwear ever since. It’s perhaps best known for its rugged hiking boots, and in particular the statement Brady boot, which it has crafted in a rich tobacco suede.

With a chunky aesthetic but surprisingly lightweight, it features a Commando rubber sole and a warm shearling lining. It’s a great boot to be worn with textural winter clothing such as woollen or corduroy trousers and knitwear.

Marsèll’s boots are instantly recognisable thanks to their uniquely shabby finish, but make no mistake they make fine boots. Founded in 2003, the name Marsell is an anagram of its two designers and counts Milan as its base.

Adding a twist to classic shoe shapes is their forte. The Parrucca boot is one such example, being a contemporary military style that has been hand-coloured to create a graded patina spreading from the toe upwards. It’s an ideal boot for wearing with a head-to-toe black look since the unique textural finish of the suede offers something different.

Officine Creative was founded in 1968 by Nazzareno Di Rosa in the Medieval Italian town of Montegranaro. Still family run, the brand has one of the largest collections of amazing shoes you’re likely to see anywhere, but as far as its suede styles are concerned, we love the Kent 004 ankle boots – a riff on the traditional chukka boot.

Italian brand Scarosso is headquartered in the small city of Montegranaro, in the famed shoemaking region of Marche, where it combines heritage and technology to produce excellent premium footwear.

The ‘Giancarlo Tabacco’ Chelsea boot is a prime example: handcrafted by artisans in the brand’s own manufactory from high quality tobacco-coloured suede leather, it is stitched using the Blake method (invented in 1856 by Lyman Reed Blake), which makes for a lighter, more flexible shoe than a Goodyear-welted style.

As you might expect from a brand that has long been renowned for its suede driving shoes, Tod’s has branched out to create a wide range of stunning suede boot styles.

Expect everything from on-trend chunky pebbled soles to sneaker hybrids to timeless minimal silhouettes. The result is a pithy capsule of elegant options that will slide nicely into a modern smart casual wardrobe.

Another of the Northamptonshire giants, Edward Green is widely acknowledged to be one of the finest shoemakers on the planet. However, you’ll also need some of the deepest pockets on the planet to enjoy its spoils.

One of our all-time favourites from Green is the suede Lambourne boot, a stunning jodhpur style with a strapping that crosses at the heel to buckle at the ankle. We won’t argue with Edward Green when it says “the Lambourne has a certain equine majesty”. They’re as close as shoes get to being a work of art.

Luxury streetwear label Off-White, founded by the late great Virgil Abloh, is best known for its innovative sneaker drops. But you might be surprised to discover that it has also created a fine ankle boot, too, replete with paper clip side zip details.

The boots have been cut in a buttery-soft black suede and feature the Off-White brand name embossed on the heel. For a streetwear brand as lauded as Off-White, it’s commendable that they have come up with a pair of ankle boots this legit.