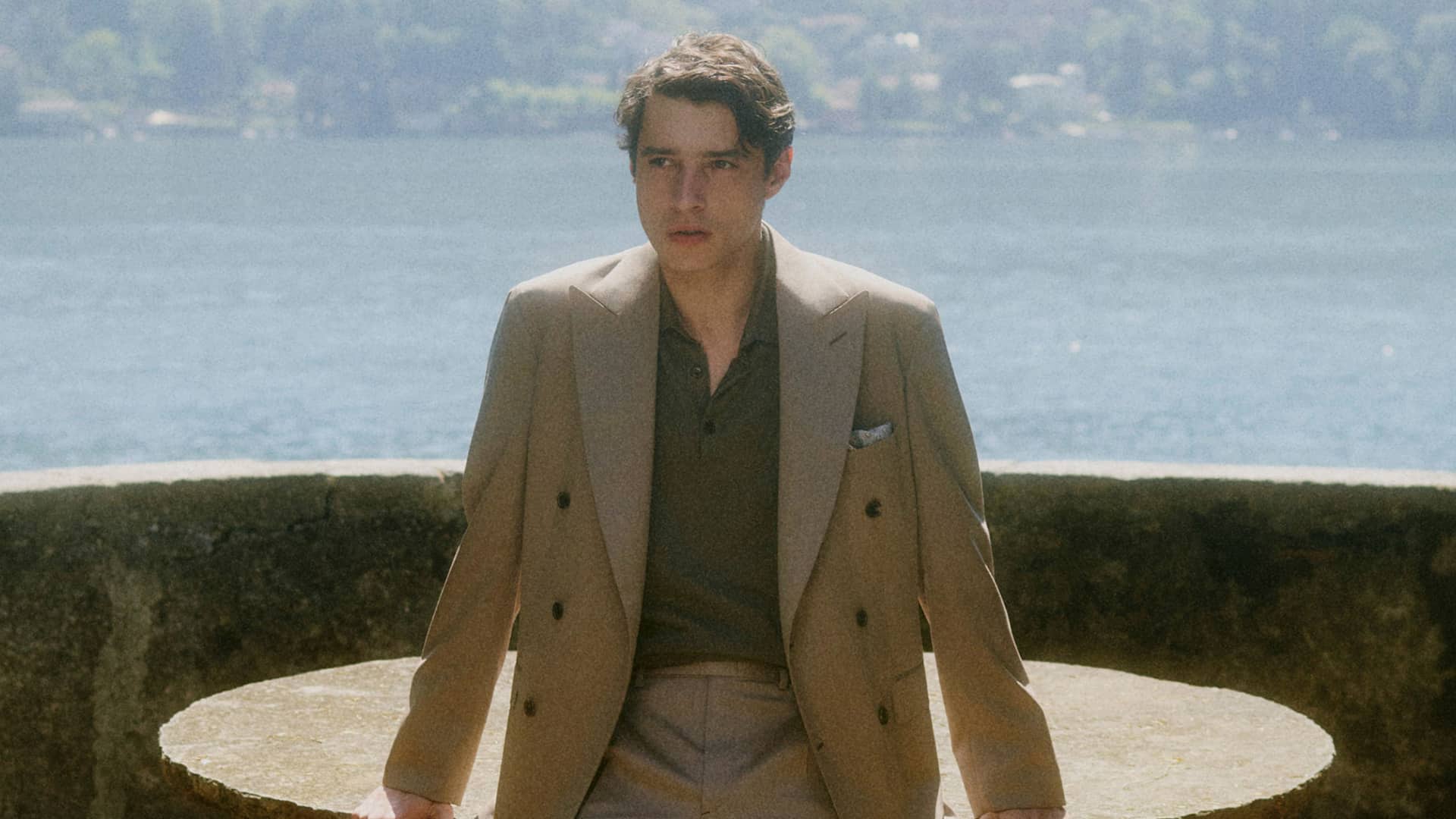 From the hair and grooming looks to the trends that defined the decade, this is the 80s men’s fashion that's still relevant today.

The 1980s was a legendary decade on many counts. It had everything, from intensely diverse music and ground-breaking film and TV, to rapid tech innovations and some of the greatest car designs of all time. An incredibly creative decade, it was also one of the most style-conscious periods in history, even if some 80s fashion trends are, even now, unfairly dismissed.

It was the decade when emerging music scenes like new wave and hip hop gave rise to vastly different ways of dressing, and the idea of the style tribe was very much in effect. New sneaker designs were cropping up seemingly every week, the denim jacket was the casualwear king, while tailoring was redefined by the likes of Giorgio Armani, with designers to this day still trying to capture the relaxed elegance he portrayed back then.

In short, if you’re looking to switch up your wardrobe, or you’re just after a new source of inspiration, the 80s might be the decade for you. From the hair and grooming looks that still work now to sourcing the perfect slouchy blazer, this is the 80s men’s fashion you can and should wear today.

The 80s was big on tailoring. From Wall Street-inspired power dressing to louche, Miami Vice-style relaxed tailoring, the suit was big business. And it makes sense. Following the gaudiness of the 70s – where the rulebook essentially went out of the window – the 80s brought back an element of structure to tailoring which coincided with the economic boom in the West.

The heart of the western financial market was of course New York City, where slick suits dominated the office along with expensive watches and even more lavish cars. The lifestyle was aspirational to a point, and demonstrated in films like Wall Street, where Michael Douglas’s Gordon Gekko flexed in his sharp pinstripe suits, pleated trousers, braces and patterned silk ties.

At the other end of the spectrum, the 80s introduced a new, relaxed take on the suit as seen in films like American Gigolo, with its oversized blazers and wide-legged, pleated trousers. This was a look engineered by the likes of Giorgio Armani, who paired his laid-back tailoring with T-shirts and turtlenecks instead of shirts and ties, giving it a more casual feel while retaining the inherent smartness that comes from wearing a suit.

Dressed down tailoring is very much a thing today, but back in the 80s it was a bold look and one that many weren’t used to seeing.

Preppy style wasn’t born in the 80s. In fact it goes back to the 50s and 60s when East Coast Ivy League university students began dressing down their tailoring and combining it with classic sportswear like sweatshirts, polo shirts and canvas sneakers. But it was in the 80s that all of those styles went mainstream.

The polo in particular saw a sharp rise in popularity, with men realising its potential as the perfect in-between smart casual piece, ideal for wearing on weekends with chinos and jeans or shorts and boat shoes in the summer.

The emerging king of prep, Ralph Lauren, had a meteoric decade. The definitive preppy brand became a byword for well-to-do casual wear with its mix of easy-wearing staples cut from a considered range of fabrics. Its branding was integral to its success also, with that distinctive polo player logo at the chest becoming a signifier of quality.

Preppy style might just be the easiest 80s trend to replicate because, well, it never went away. Oxford shirts, polos, varsity jackets, chinos and loafers – they’re all modern-day wardrobe staples so chances are you already have a few in your rotation. Look at brands like Rowing Blazers, Golf Wang and J.Crew (under the direction of Supreme alumni Brendon Babenzien) for authentic modern takes on prep.

The 80s saw hip hop go from an underground sub-genre in New York City to a global phenomenon in the space of just a few years. Capturing the zeitgeist perfectly, it saw groups like Run DMC and the Beastie Boys, as well as rappers like Ice-T, Eric B and Rakim and LL Cool J, become the world’s biggest, most in-demand artists almost overnight.

With that came a new style of dress made up of matching, brightly coloured tracksuits, bucket hats, large chains and other jewellery, and sneakers.

The latter especially weren’t much of a thing before the 80s, outside of sport. But the decade made sneakers the go-to choice for casual footwear, with brands such as Nike, Adidas and Converse investing heavily and creating new, innovative designs. The Air Jordan brand also made its debut with star basketball player Michael Jordan releasing his first pair of signature shoes; the rest is history.

Sportswear was adopted by the world of hip hop but also worn across the globe, loved as much for its comfort as eye-catching colours and big logos. It’s a look that remains popular and extremely wearable today.

Denim had been popular prior to the 80s. The 70s gave rise to the jean as the go-to casual trouser, following its increasing popularity in the 50s and 60s. But the 80s was all about double denim. A matching pair of pale wash jeans and trucker jacket, paired with a band T-shirt and canvas sneakers was one of the defining casual looks of the decade.

It’s one that’s just as stylish today. To pull it off in the 21st century, tone things down just slightly. Pale wash denim can look quite harsh from head to toe, so consider pairing a black jeans with a lighter blue wash jacket or shirt for a more contemporary update on this 80s aesthetic.

The 80s hair trends that live longest in the memory are the wild ones: the mullets, the Lionel Richie Jheri curls and the flat tops that added five inches to a man’s height. But there were plenty of cool – and far more wearable – 80s hairstyles that still look great today.

For shorter styles, look to Wall Street slick backs or bleached crew cuts. Both look excellent with a leather jacket (another staple of the 80s). They’re easy to maintain and still have that showmanship that made the MTV generation so great.

For something mid-length, look to the 80s affection for another decade: the 50s. The quiff made a huge comeback in the 80s, either slicked back or left loose and floppy. Just swap the canned hairspray for something more modern and forgiving, like sea salt spray.

You’ll use the same product on longer, grown-out styles, which suit straight or wavy hair. Natural, shoulder length hair was immensely popular in the 80s and early 90s, and it can still look great today. Simply apply some volume spray to the roots of the hair, crunch with your hands and let it fall naturally. Judd Nelson would approve.

It might not be the best idea to rock an authentic 80s suit today. Depending on the style you go for, you could end up with an overly confident power suit replete with pinstripes, heavily padded roped shoulders and button-on braces. A better alternative would be to take inspiration from the decade’s more relaxed take on tailoring.

Look to the protagonists of Miami Vice, but update the look slightly. Instead of off-white, oversized tailoring, go for something darker in shade but equally unstructured and laid back. A stone or beige linen-blend suit made from a herringbone wool/silk mix would be an ideal choice, especially when paired with a T-shirt or polo and canvas sneakers.

Perfect for a beach wedding, or fancy cocktails at a rooftop bar, this 80s-inspired look will turn heads for the right reasons.

An extension of the 80s tailored look, pleated trousers are an underrated wardrobe staple. A smarter, more formal version of flat fronted trousers or chinos, pleated versions were popular throughout the decade, either worn with a matching blazer or dressed down with preppy essentials like polos, Harrington jackets and boat shoes.

Aim for something similar today and you’ll end up with a sharp, laid-back look that’s appropriate for a creative office environment or just lounging around on a weekend.

In terms of fit, pleated trousers should be slightly wider than your typical slim-cut chino, but a gentle taper will ensure they’re still easy to wear and perfect for dressing up or down.

The denim jacket is far from an 80s child. It began life at the turn of the 20th century as a garment designed for the miners and cowboys of the American west who demanded a tough, practical outer layer that could withstand the rigours of daily life.

Made from a virtually indestructible fibre known for its long-lasting quality and ability to take a beating, the denim jacket had long been a blue collar staple. But by the 80s it had well and truly shed its working class roots and become an object of desire among the youth, who valued it as much for its durability as its style.

The denim jacket has never lost its cool and today looks just as good with jeans, chinos and tailored trousers, as well as tees, polos and knitwear. If there’s a single 80s-inspired piece to invest in, this might just be it.

The 80s was a golden era for sneakers. Numerous styles saw the light of day in the decade, from Jordans to Nike Air Force Ones as well as classic Adidas styles like the LA Trainer, Forum, Rod Laver, Campus II and more. The majority of these styles remain incredibly popular, and it’s easy to forget they were designed 40 years ago.

Air Force Ones, for example, still look contemporary today with their clean design and perfectly chunky sole, while classic Jordans like the 1s and IVs are more hyped than ever, regularly selling out any time new colourways are released.

For a classic slice of 80s-inspired action, try pairing one of the above models with pale wash jeans and an oversized sweatshirt or hoodie. It’s a subtle take on the decade’s most-loved designs, but one that’s equal parts stylish and laid back.

Magnum PI knew. The moustachioed 80s detective was rarely seen on screen without a bold printed shirt. It was often a Hawaiian-style pattern, but colourful abstract designs got a look in, too. The same goes for Nic Cage in Raising Arizona, Tom Cruise in Cocktail, Al Pacino in Scarface and, of course, Chunk in The Goonies.

The 80s was an extravert decade in a lot of ways, so printed shirts fit perfectly into casual wardrobes, tucked into some light-wash jeans or left open with a white tee and some shorts.

It’s not a style that everyone loves, but if you’re going to do it, there’s no point being bashful. Opt for florals or wavy trippy patterns and wear them now as your old man did back then: dad jeans, high-waisted trousers, denim shorts, perhaps with a white vest underneath. Can’t go wrong.