An icon of Americana, the denim jacket, also known as the trucker jacket, has become a shining symbol of democratised workwear. We explore its origins, evolution and the best ones to buy today.

The denim jacket. Where to start? From James Dean to Kanye West via Elvis and Virgil Abloh, the classic jean jacket has ridden on the shoulders of cultural giants and is still to this day an essential menswear silhouette.

Does a garment exist that has been appropriated by more cultures, countries and social strata, other than its cousin, denim jeans? We can’t think of one. An icon of Americana, a symbol of America’s rugged past and a motif for stylish workwear all over the world, it is one of those garments that everyone has, at some point, owned.

Easy to wear and impossible to kill, it’s both inherently masculine and playfully feminine, depending on whose shoulders it’s sitting on. Read on to discover the origin of the denim jacket, how it has evolved over the decades, and how to purchase killer examples of this cult classic today.

The genesis of the denim jacket

Although the story of the denim jacket is almost entirely wrapped up in the American west, the fabric itself was first produced in the France city of Nîmes, which is where the cloth gets its name (as an English bastardisation of ‘de Nimes’). The genesis of the jacket dates back to 1853 and the beginning of the great Gold Rush, when an enterprising young man called Levi Strauss opened the doors of his haberdashery shop in San Francisco.

After Strauss started selling strong cotton trousers for the purposes of mining and gold panning, one of his customers, Jacob Davis, added copper rivets to the seams and pockets to reinforce them. The pair patented this new design and started to mass produce them to great success. From there, it wasn’t long before Strauss saw an opportunity in creating a matching upper half.

Despite the end of the Klondike Gold Rush in 1899, rugged workwear had become an established genre, so in 1905 Strauss released a ‘Levi Blouse’, known by its code 506. Like the jeans before it, it was cut from very heavy unsanforized 9oz denim and was cropped and boxy with double pleats down the front.

Advert for an original Levi’s 506 jacket

From 1917 the ‘blouse’ was referred to as the ‘Number 1’ style in the Dude Ranch Duds Western catalogue, which is where the modern ‘Type I’ label comes from. As mentioned above, Types II and III followed later.

Throughout the rest of the 20th century, each of these jackets played a dominant role in menswear, always maintaining their rugged and utilitarian appeal, while also becoming motifs for rebellion, counter culture and eventually luxury fashion. Never has there been a more copied item of clothing than the Trucker (although we often use the interchangeable terms ‘denim jacket’ and ‘trucker jacket’ today, both refer to the three types of jacket), nor more enduring.

Denim styles have changed, and much improved, thanks to the selvedge denim movement of the 2000s, while painted and embellished styles have been the preserve of high-fashion houses looking for unique ways to slap huge price tags on one of the most popular items in menswear history. Reinvention abounds, but the core of today’s truckers rarely deviates far from those fabled three originals brought to life by Levi Strauss. 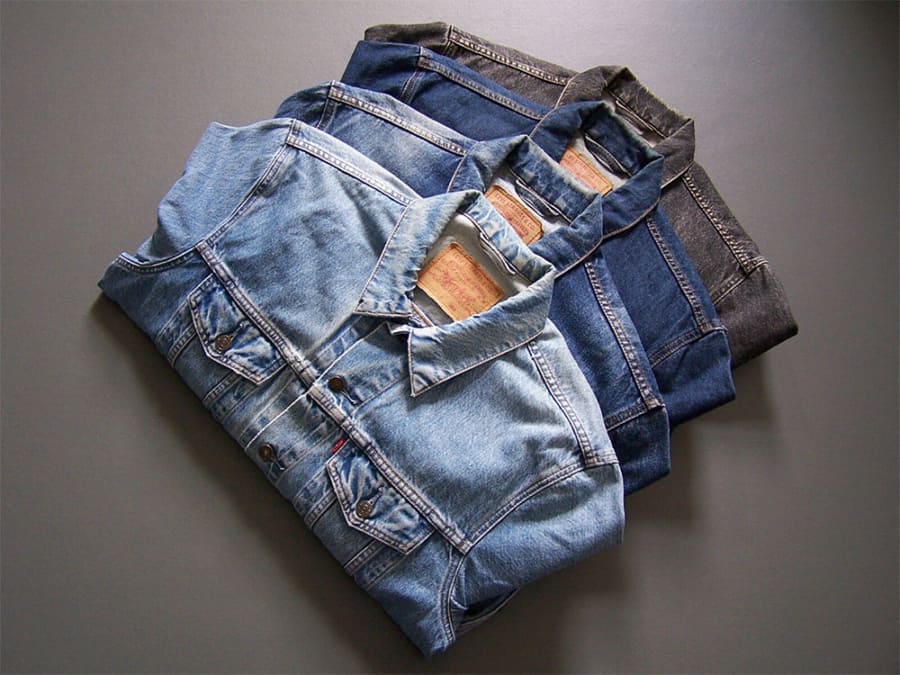 Denim is defined as a hardwearing cloth made from cotton fibres using a twill weave, which creates a unique diagonal ribbing. Shortly after the cotton is harvested and spun into a yarn, it is dyed with indigo (likely to be a synthetic but because of the harsh chemical pollutants this creates, some specialist brands are reverting back to natural methods).

In the dying process, cotton threads are usually soaked and dried 15-20 times, which obviously uses up a great deal of water, making it all the more important to buy quality denim and literally wear it to death.

After dyeing, the yarn may be sun dried to deepen the colour. Ever wonder why denim is mostly blue? It was a decision made by US manufacturers, who reasoned that the chemical properties of the dye stuck to the threads better than other hues.

The different types of denim available consist of 100% cotton denim, raw denim (simply untreated and unwashed, hence stiff), washed denim (washed after the dyeing process to prevent shrinkage and colour bleed), and stretch denim, which is woven with a stretchy synthetic fibre such as elastane.

The most important denim jacket styles

The original Levi Strauss denim jacket, the Type I is the patriarch of a trio of denim jackets that has spawned every other style created since. There is not one Type I jacket however, but six variations that evolved over four decades.

Some of these early variations saw small stylistic changes, such as the addition of the red tab in 1936, but with the advent of World War II and fabric rationing, the final version did away with any superfluous details and became immensely popular thanks to its take up by celebrities at the time, notably the singer Bing Crosby and actor Robert Mitchum.

Typically, the Type I features a single left chest pocket, riveted pockets and cuff vents, knife pleats, selvedge detail inside the front placket and a cinch back.

As the 50s rolled into town, so did a new Levi’s Trucker – the 507XX, AKA the Type II. At this point in the trucker’s evolution, it had ascended the confines of mere workwear to become something adopted by a new young generation. They saw it as a symbol of rebellion and defiance against post-war white collar uniformity, thanks in no large part to the rock ‘n’ roll movement.

Another chest pocket reinforced with bar tacks was added to the slightly longer silhouette, losing the cinch back for buttoned waist adjusters.

What’s interesting is that despite its huge popularity, the production run was relatively short, culminating in a final line in 1962, meaning that originals from that period are being traded for decent amounts of money today.

No sooner had Levi’s halted production on the Type II trucker, it immediately released its successor – the Type III or 557. Design-wise, it was a family affair, having been brought to life by Jack Lucifer, who was the son of the woven red tab label creator Chris Lucifer.

The Type III is an altogether more minimalist style, having got rid of the pleats and rivets and featuring a more svelte silhouette thanks to the instantly recognisable duo of V-seams running down the front.

With pointed flap chest pockets sitting that little bit higher, and the addition of hand pockets coming into the design in the 80s, it became the archetypal trucker design and the one that is most replicated today.

ASKET abides by the motto ‘The Pursuit of Less’. Championing sustainability, the Swedish brand is the antithesis of fast fashion. It produces a small, permanent collection of timeless, interchangeable pieces that are well made and designed to be worn to death. The type of garments that set the foundation of any capsule wardrobe.

Of course, the denim jacket sits right in this remit. Offering a modernised take on the Type 3 silhouette, it comes available in soft, washed, 100% organic Italian denim as well as a 13oz Japanese raw denim. Each features two chest pockets with button-secured flap, two invisible side pockets and buttons and rivets made from recycled metal.

Need we say more about the original and best? You simply cannot go wrong with a Levi’s denim jacket. The brand produces each of the three types in a variety of different denim fabrics and all around the £250/$250 mark, representing amazing value for an Americana icon that should last you decades.

With a rock ‘n’ roll menswear aesthetic, it’s no surprise that luxury Parisian house Saint Laurent would do a fine line in high-end truckers.

Expect both faithful and creative renditions of the classic Types, with the latter featuring unique distressed elements. Saint Laurent always has a diverse collection of washes, so look out for off-white styles and deep indigo, too.

Contemporary streetwear brands have long been fans of the denim jacket, with the likes of Kanye West rarely seen out of one. One of the most creative proponents is Heron Preston, which has produced a distressed version of the Type III this season in a vintage washed-out blue tone.

If you’re looking for denim diversity and something a little leftfield of the originals, then Italian mega-brand Diesel should be your first port of call. With a tonne of different fits and denim treatments, Diesel’s truckers rarely fail to bring an edginess to the design.

One of the hype brands of the moment, Amiri’s trucker jackets typically retain the silhouette and design of the Type III. However, they also tend to come with distressed elements, stone washed and highly embellished, with painted motifs or patchwork elements – perfect if you want your streetwear to turn heads.

The trucker has always featured prominently in Hedi Slimane collections, so of course Celine Homme offers some stellar examples of the classic. Using the Type III as his blueprint, Slimane has created a faithful replica of the original in a vintage union wash, as well as a hooded version with ‘Celine’ emblazoned on the rear of the hood.

There’s also a loose-fit teddy jacket style, and an oversized trucker with a faux shearling lining and lambskin fringing.

As you would expect from Alessandro Michele and a brand that champions a maximalist approach, Gucci’s denim jackets are anything but ordinary. #

The silhouette is about the only reference to the classic types – otherwise expect reversible denim, pink and metallic finishes and wild GG jacquard patterns. Not for wallflowers.

A Type III denim jacket was one of the style signifiers of the late great Virgil Abloh so it’s only fitting that Off-White is continuing that legacy. Slim fitting and with subtle denim details and logo treatments, as well as some unique washes, there’s plenty to love about Off-White’s offering.

While America can rightly claim that the denim jacket is theirs, after the Second World War, Japan’s adoration for Americana turned to obsession and it quickly became the world’s epicentre for all things denim.

One Japanese label that has excelled in evolving the jean jacket is Kapital. The luxury denim brand has incorporated a Japanese workwear aesthetic into its styles, creating soft loose shapes rather than stiff cropped designs. If you’re looking for something beyond the Levi’s Type I-III status quo, then a trip to Kapital should be more than satisfying.

In complete contrast to Kapital, The Real McCoy’s is a Japanese brand that faithfully reproduces the classics down to the very smallest detail. So if you hanker after a genuine 1950s Type I trucker, for example, The Real McCoy’s will invariably have made one in the best 14oz denim money can buy.

20 Modern Preppy Outfits For Men: How To Get The Ivy League Look In 2022