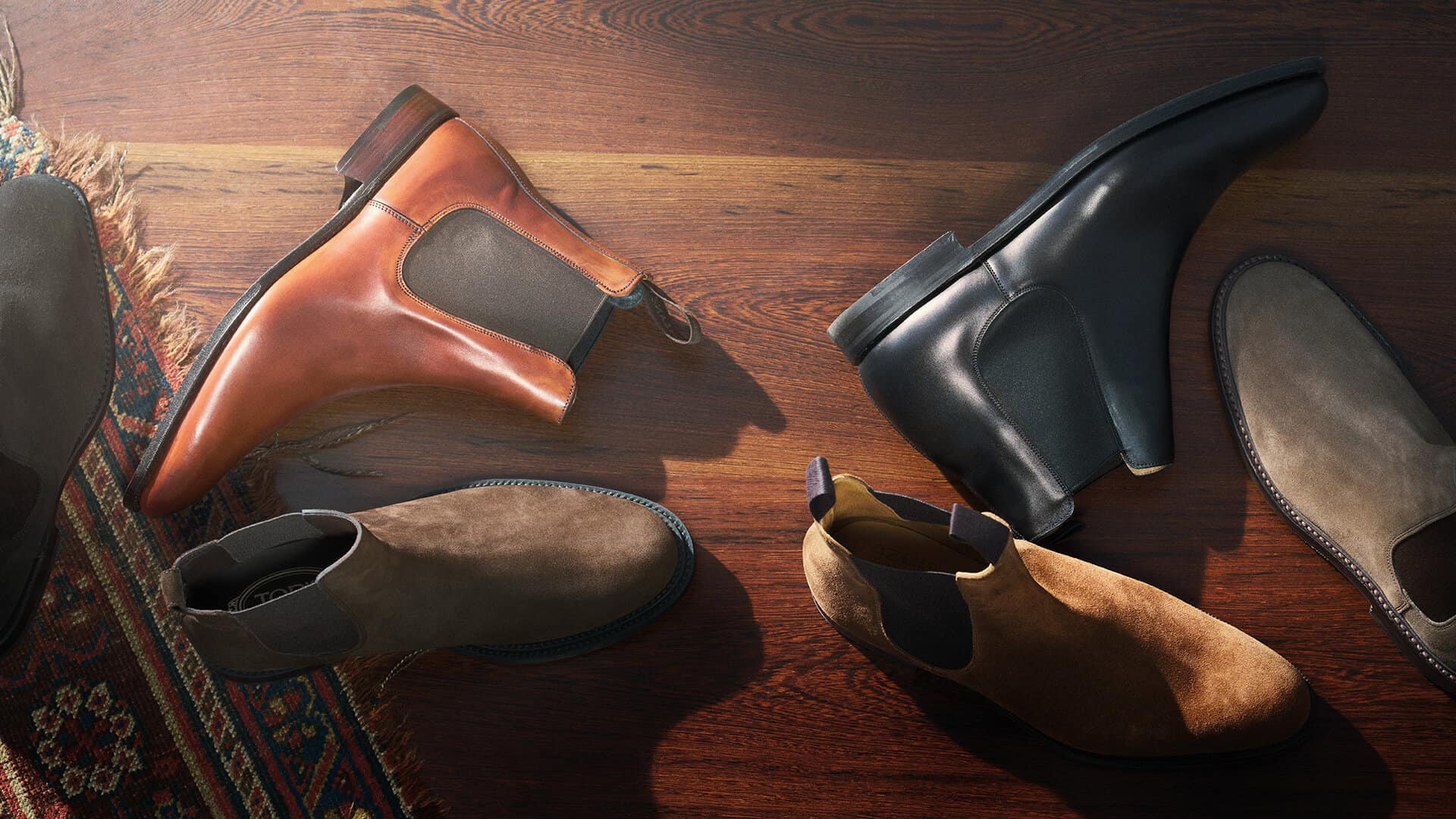 Sleek and sophisticated, Chelsea boots lend themselves to many outfits, whether you're adding a rock 'n' roll flavour to tailoring or a rugged edge to weekend attire.

With its elasticated ankle and sleek, clean silhouette, there’s no boot like a Chelsea boot. The classic style has been around for over a century, first dreamt up in the Victorian era before becoming a signature of The Beatles decades later.

They’re easy to wear today, adding a rock ‘n’ roll flavour to tailoring as well as a rugged edge to weekend attire. But which style is right for you and what pieces do they pair best with? Here’s everything you need to know. 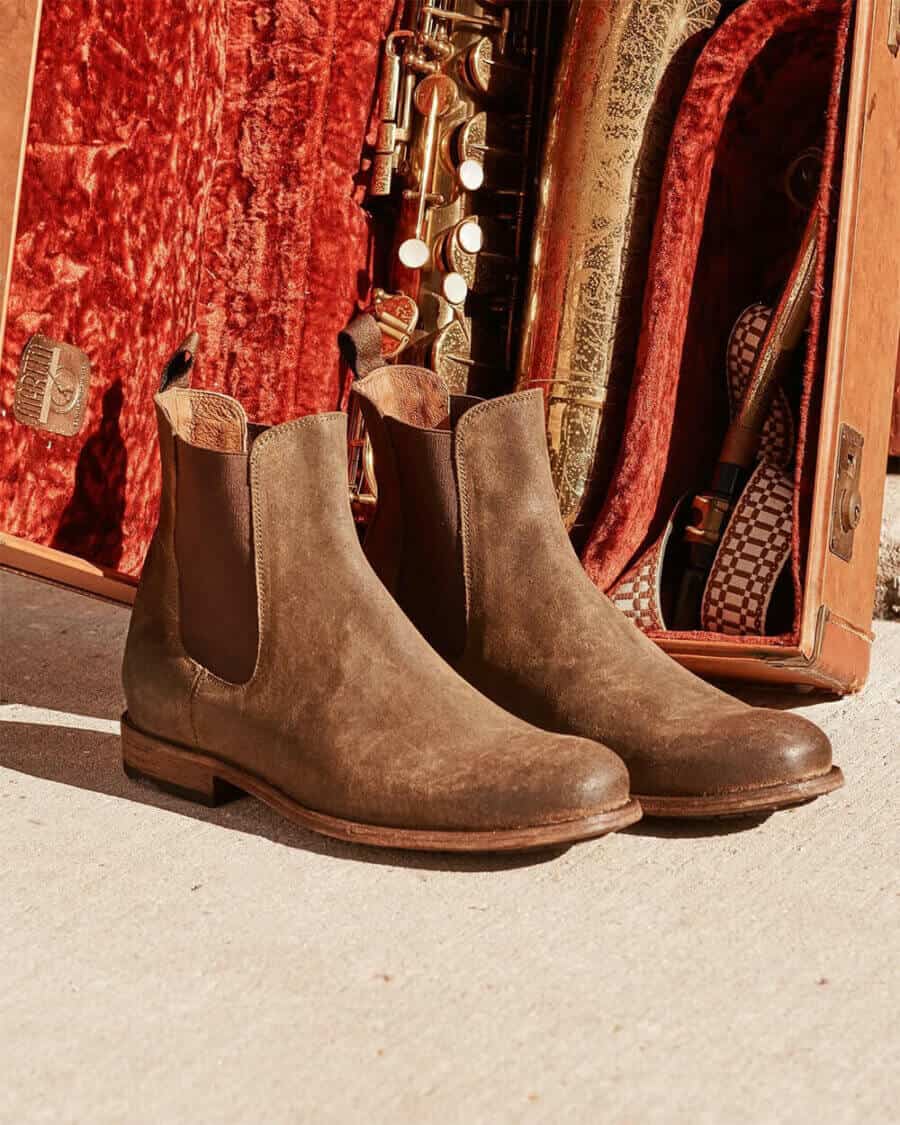 As with most leather shoes, Chelsea boots are most commonly available in black or shades of brown. But which you go for largely depends on when and where you want to wear them. You can’t really go wrong with either, but both have their own unique perks.

Black Chelsea boots are inherently smarter than brown ones. They combine best with monochrome outfits, so if you have a penchant for wearing all black then this might be the option for you. Black Chelsea boots also work particularly well with dark tailoring, giving suits an edge that references the Mods of the 60s as well as iconic bands like The Beatles and early Rolling Stones.

Brown Chelsea boots lean more casual, lending themselves to more laid-back outfits. They go perfectly with blue denim jeans, chunky knitwear and heavy winter coats, but equally combine nicely with tailored trousers and a tucked in T-shirt. They’re still smart, but brown footwear has long been associated with casualwear, whereas black is easier to dress up. 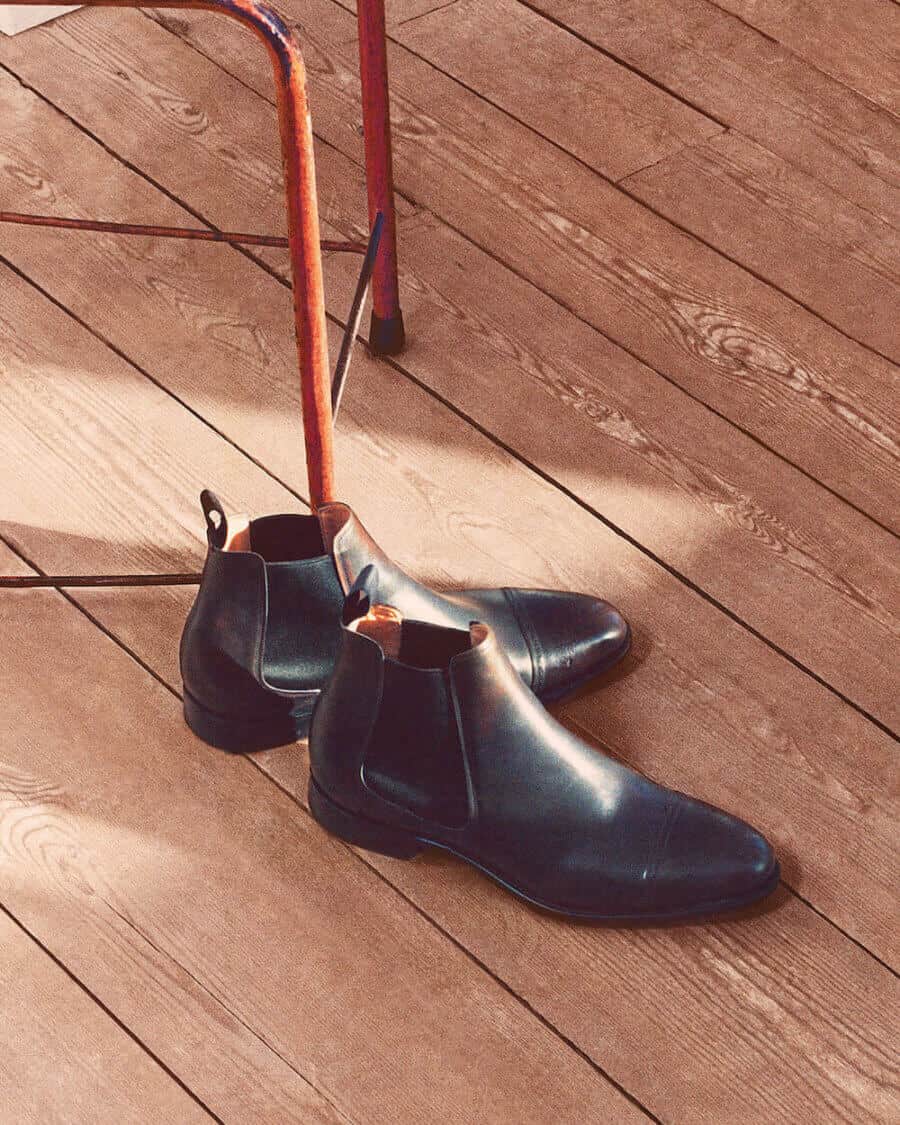 Chelsea boots are very distinctive in their look. They can be instantly spotted in a line up of shoes thanks to their sleek silhouette, elasticated ankle and pull tabs, which allow the wearer to slide them on and off effortlessly. However, while the silhouette is fairly linear, there are some subtle variations on the design that drastically change the look and feel of the Chelsea. These can mostly be found with the shoe’s last and sole.

Lasts are what shoes are built around – they’re wooden, foot-shaped blocks that the leather is moulded on, creating the shoe’s shape. Traditionally, Chelsea boots were built on relatively slim lasts, giving them the style’s distinctive sleek, streamlined look. This also makes them appear more formal.

Shoes with slim, sculpted lasts are always smarter than those made using wider, bulkier ones. Go for slim Chelseas, then, and you’ll have a very smart pair of shoes, especially as they usually come with equally thin leather soles, making these boots the perfect accompaniment for tailoring.

For a more contemporary look though, and one that opens up the Chelsea boots to casual wear, opt for a pair that’s chunkier with a rounder, more comfortable toe box. Add to this an on-trend rubber commando sole and you can wear them as you would your favourite pair of Derby shoes. 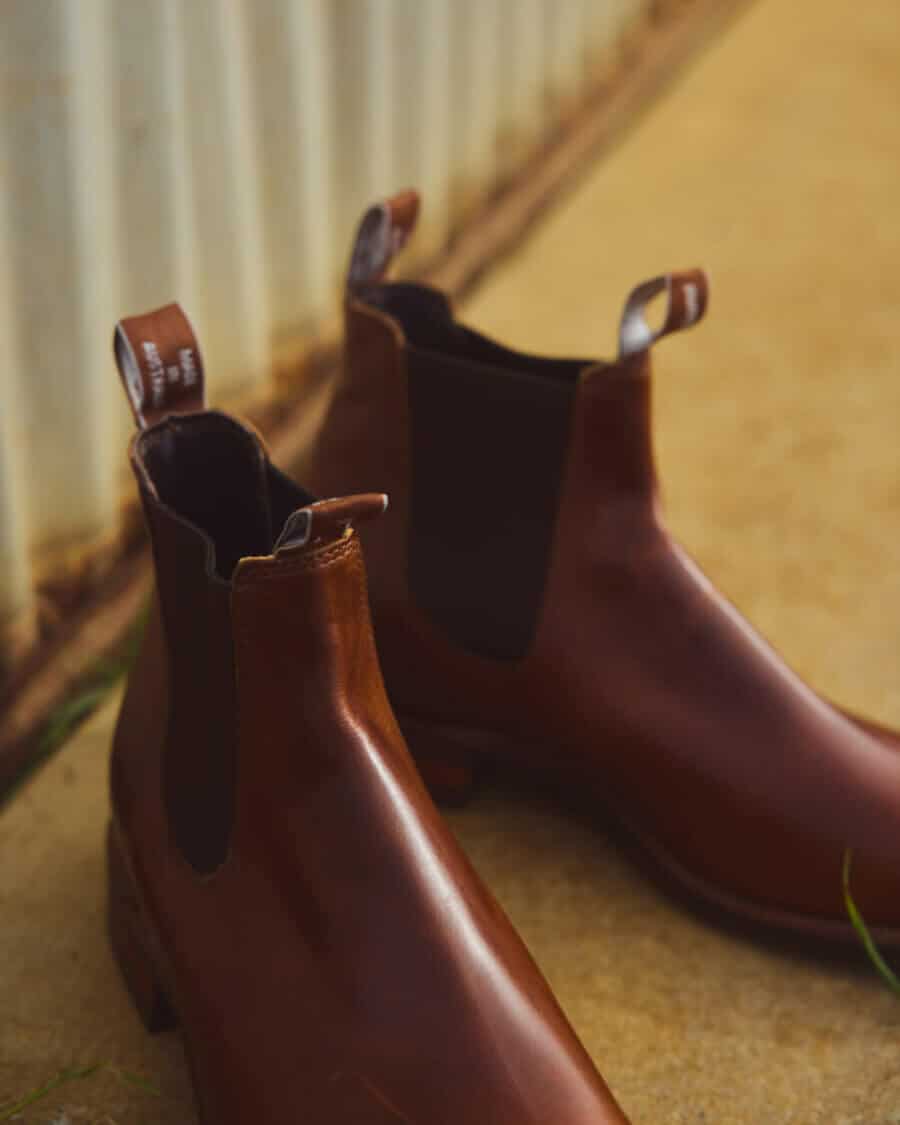 Chelsea boots are typically crafted from either leather or suede. But again, the options within these two parameters are more varied than you might first think.

When it comes to leather, you can find boots in anything from high-shine calf leather to waxy, yearling cowhide. When going for leather, you ideally want to seek out the best quality hide you can afford. But remember, generally, the more polished it is, the sharper it looks. Shiny leather is smarter, whereas matte leather leans more casual.

Suede is also an option though, and again, there’s plenty of variety here. You can find soft, smooth suede boots which are better suited to tailored looks; or durable rough out suede designs, which looks great with casual pieces.

Whichever option you go for, make sure you have an idea of where you’re going to wear your Chelsea boots most, and that should help inform your decision.

Here’s a selection of modern, stylish Chelsea boot outfits suitable for a number of occasions. Use and save them as inspiration for your own everyday looks.

Dress up your casual wear 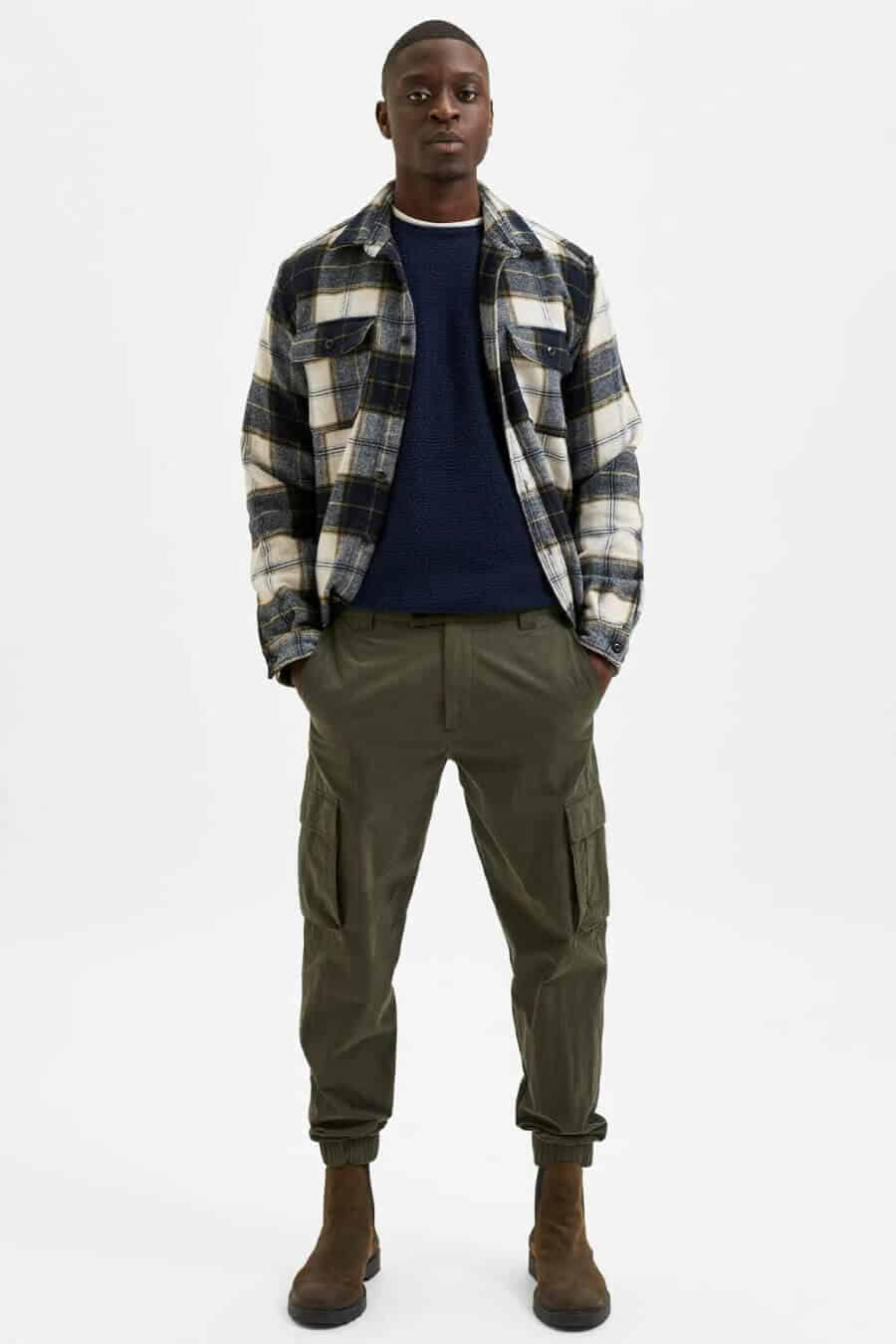 Chelsea boots have the ability to add a dressy element to even the most casual of outfits. Take this cargo pants/flannel shirt/crew neck combo: where sneakers would have matched the laid-back feel, Chelsea boots give the look a smarter, military edge. 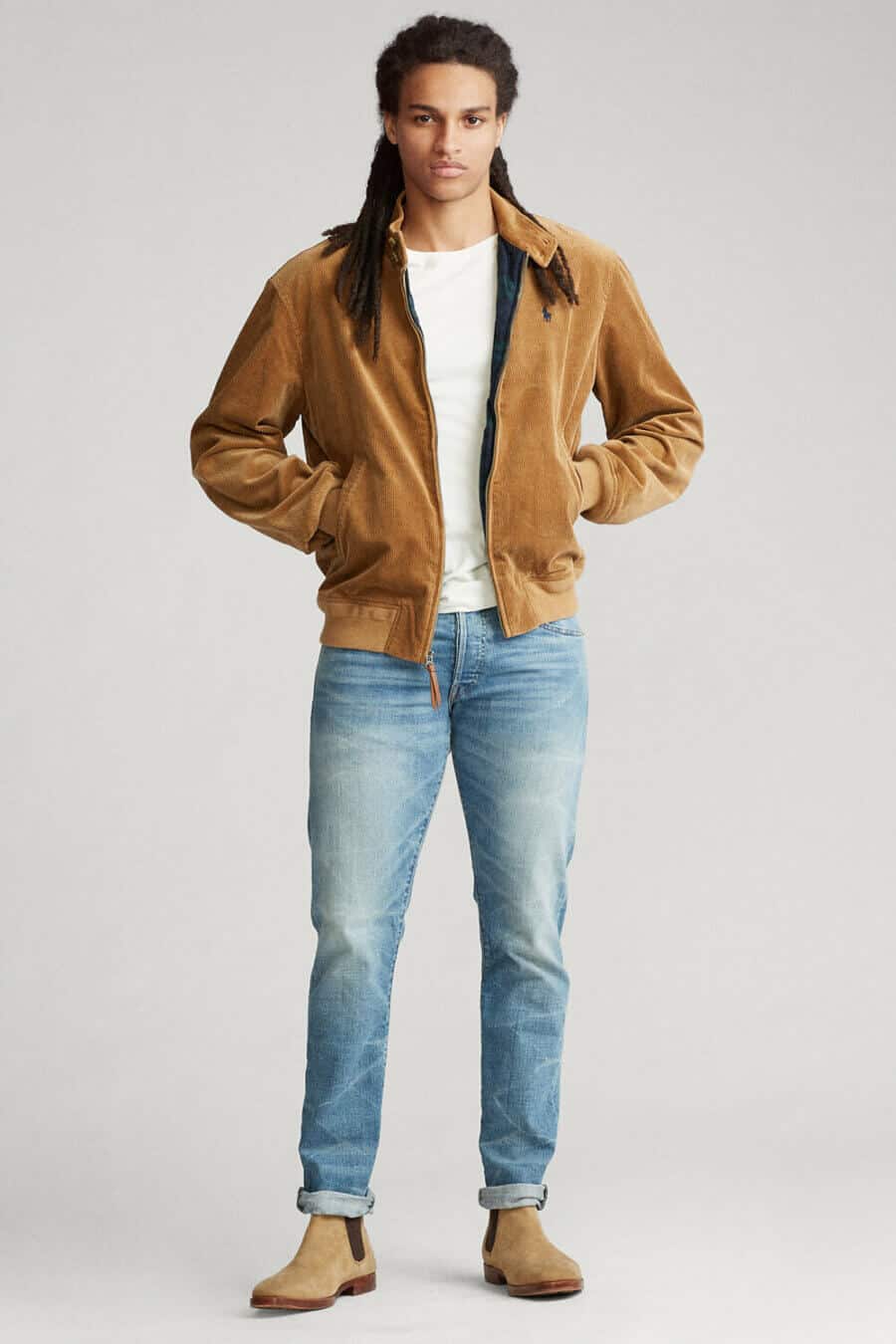 Chelsea boots are a natural pairing for jeans. Whereas dark browns and black match well with dark denim, the opposite is true for pale washes. Instead, try a pair of stone suede Chelsea boots with light wash jeans, and finish the look with a complementary corduroy Harrington jacket, which adds a touch of preppy flair.

Chelsea boots as an anchor 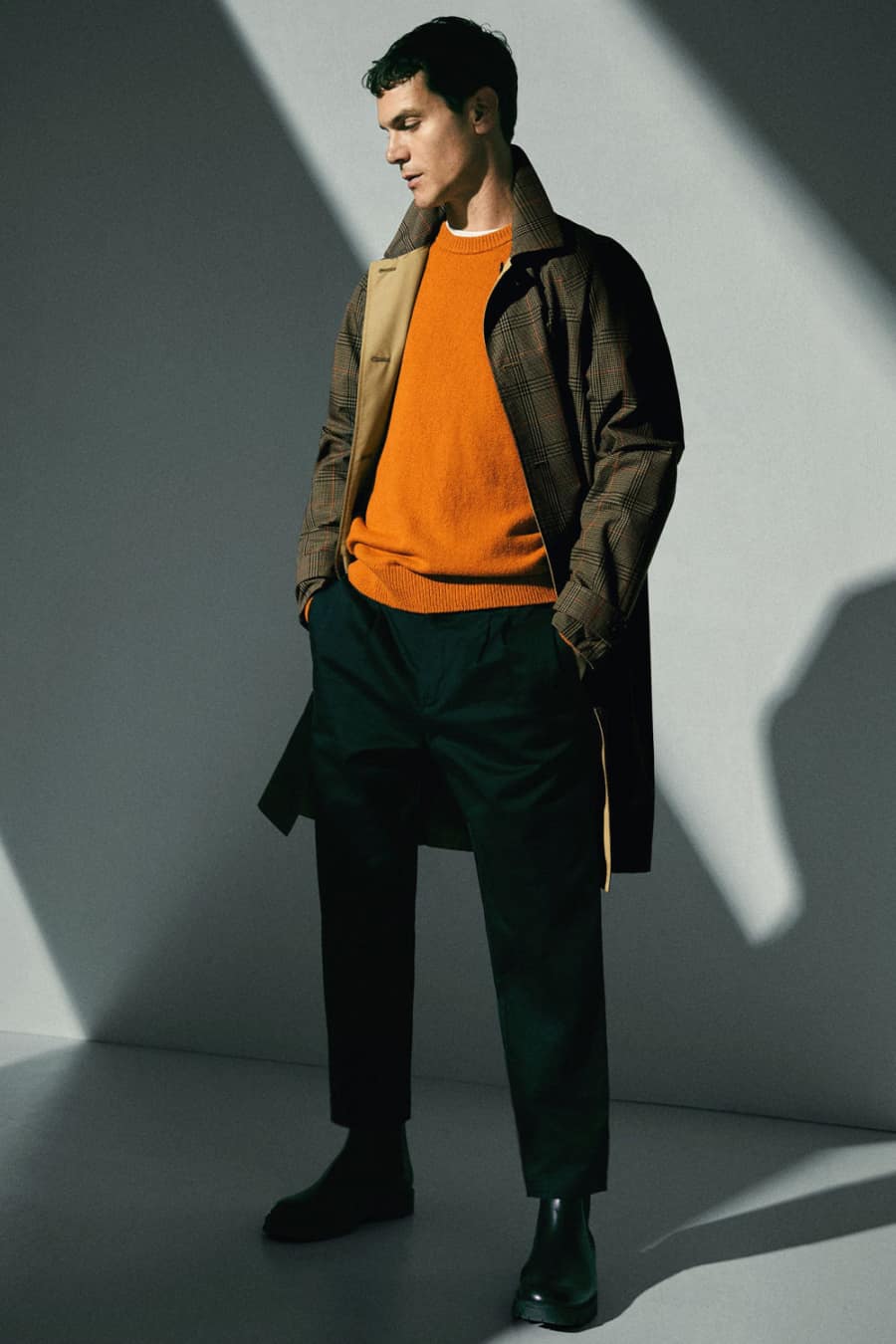 Your footwear doesn’t always need to make a statement, as proven here. Black leather Chelsea boots will perfectly anchor any outfit, particularly when combined with black pants, allowing other bolder pieces to shine, such as a bright orange crew-neck sweater and subtly checked rain coat. 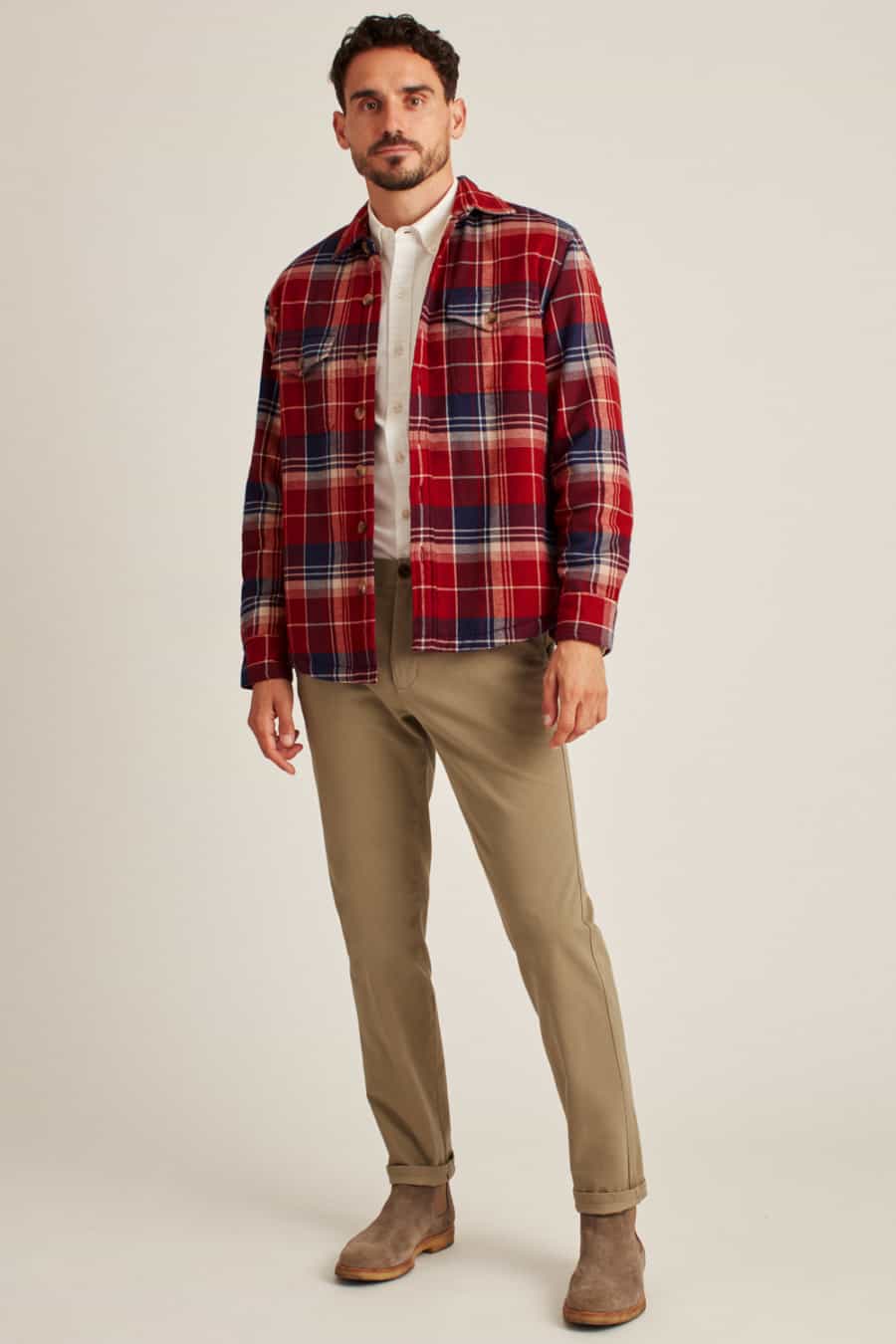 The Chelsea boot is a true chameleon; able to be dressed up or down for almost every occasion and formality. The above is a case in point: the textured suede boot and chunky leather sole perfectly complements the rugged nature of a plaid flannel overshirt, yet the sleek silhouette is refined enough to combine with slim khaki pants and a smart white Oxford button-down. 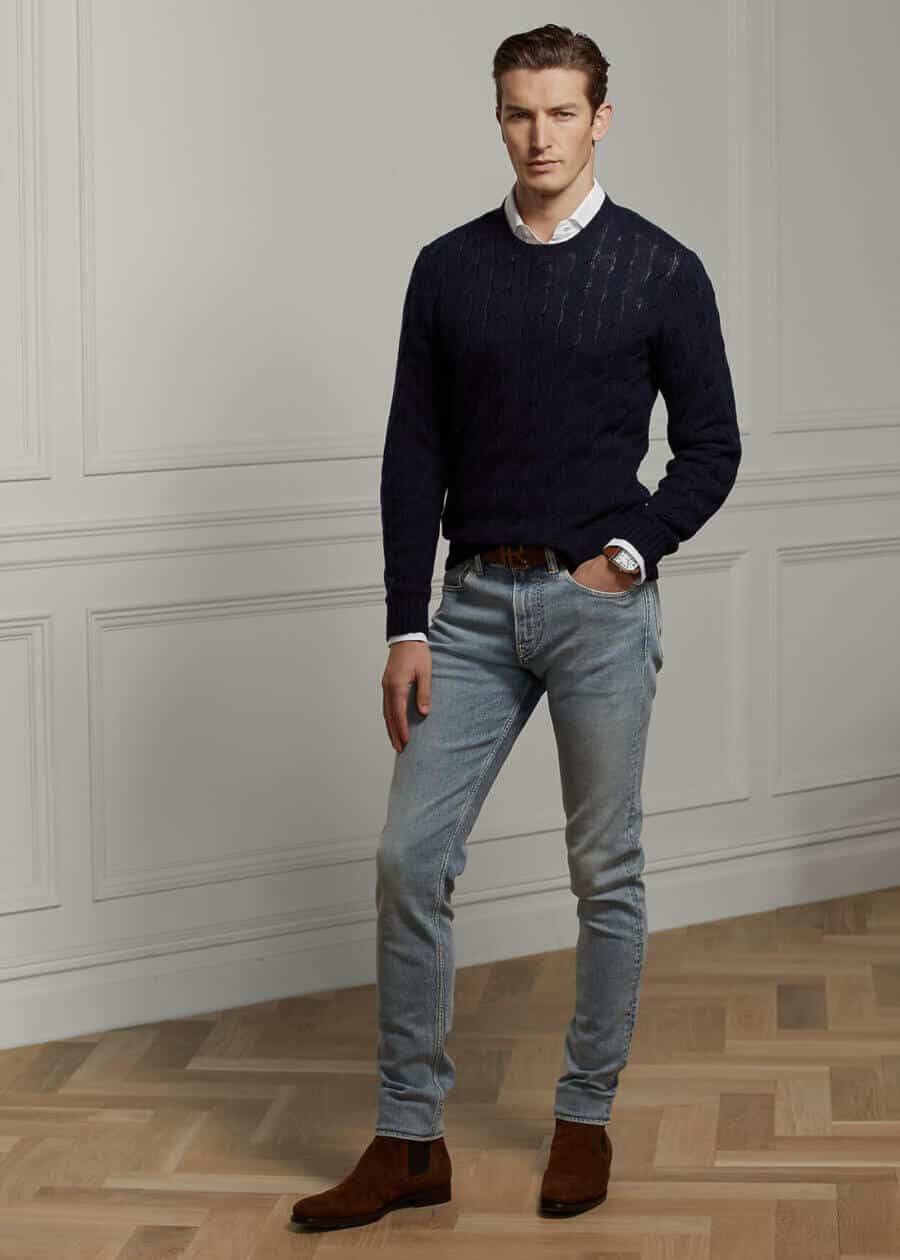 Possibly the most versatile style of all, brown suede Chelsea boots are the perfect finishing touch to navy tailoring or more smart casual outfits. For the latter try them with pale wash denim, a navy crew neck and a white shirt. 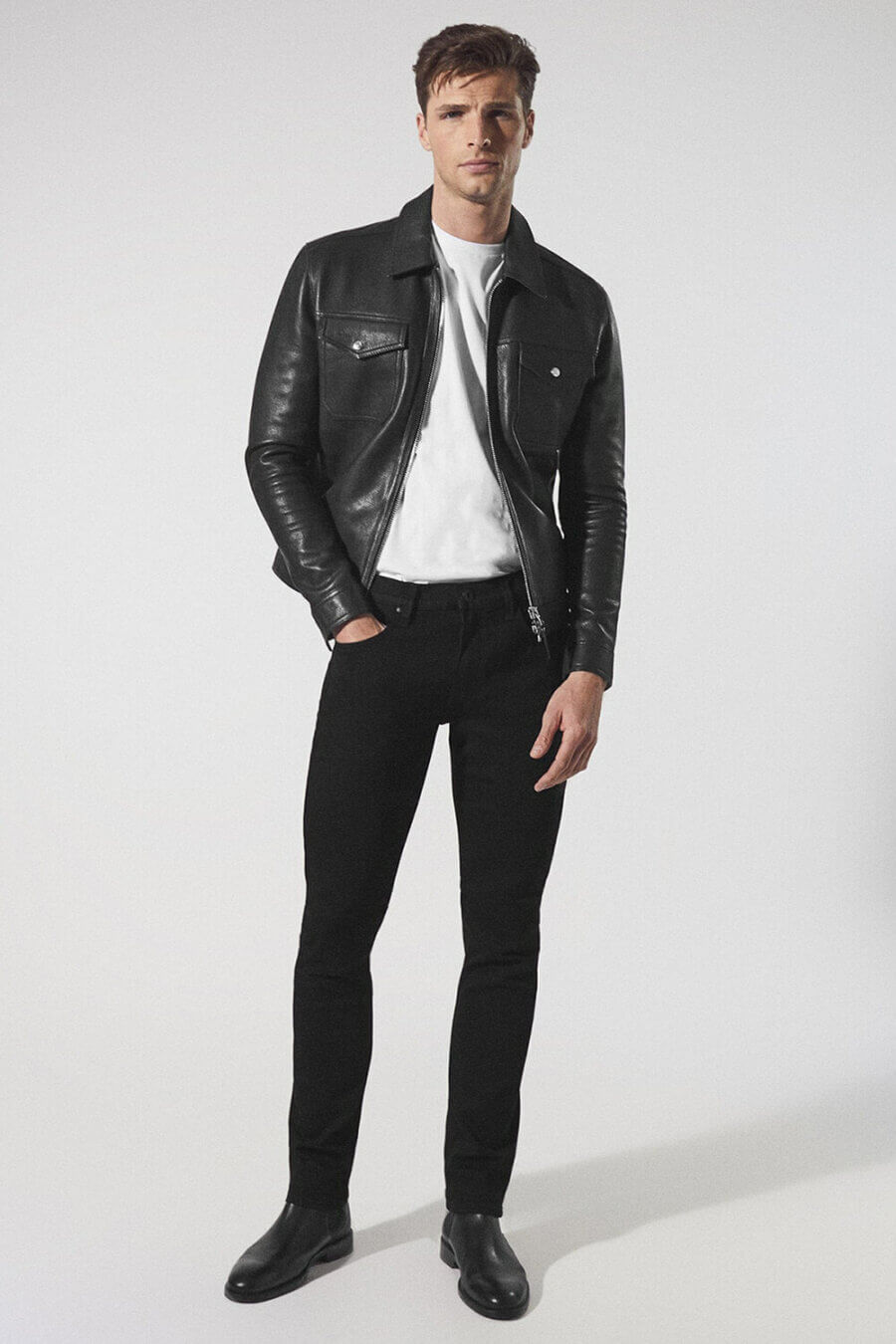 All-black looks should always be in your repertoire, not least because they flatter most body shapes. Black leather Chelsea boots are arguably the best shoe to finish off black-on-black fits, especially when combined with black jeans and a leather jacket. 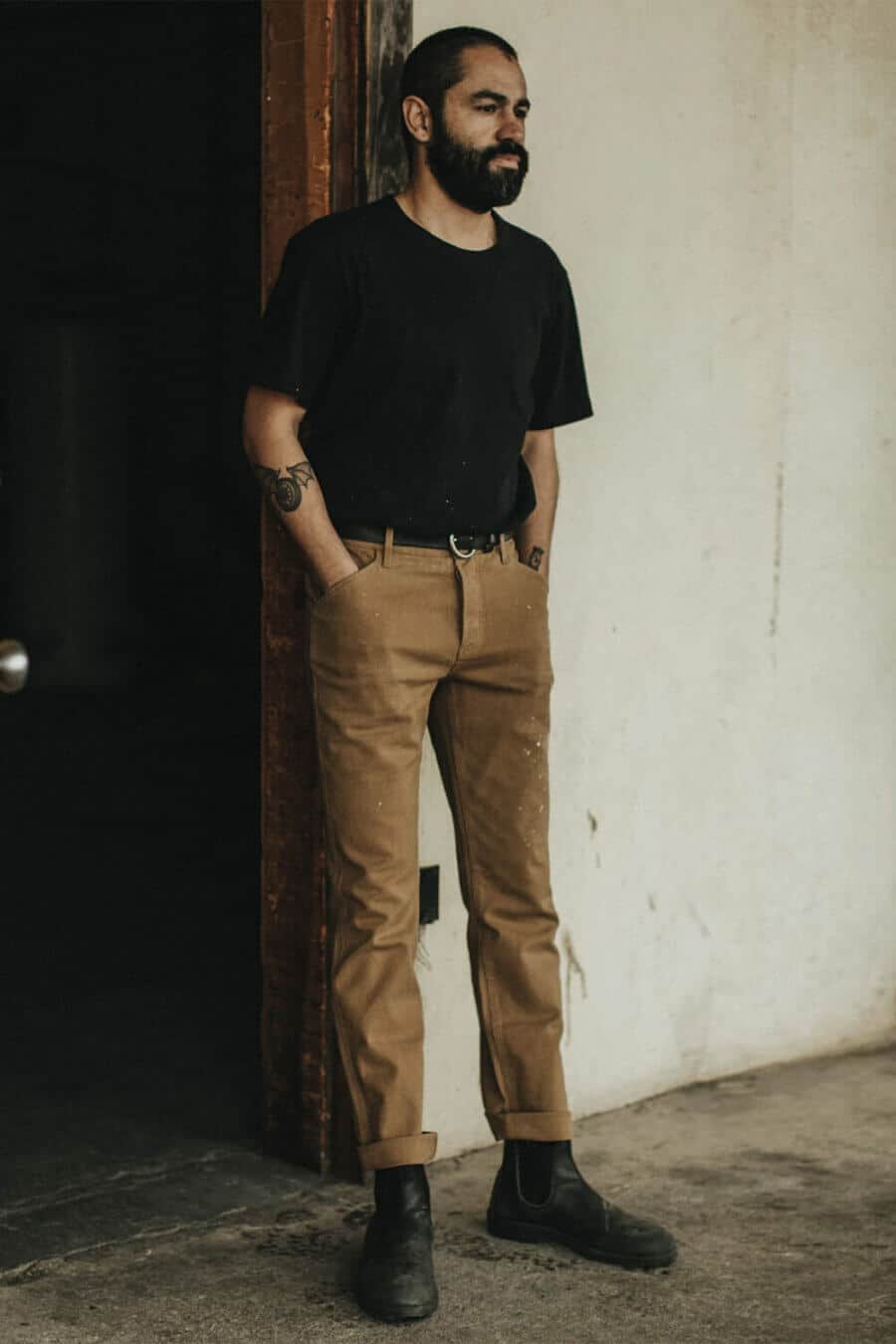 It’s entirely possible to dress casually with Chelsea boots, so long as you go for a chunkier pair with a durable rubber sole. To give it a go yourself opt for a black pair with caramel coloured work trousers and a black T-shirt, which can be tucked in or left untucked for a more relaxed finish. 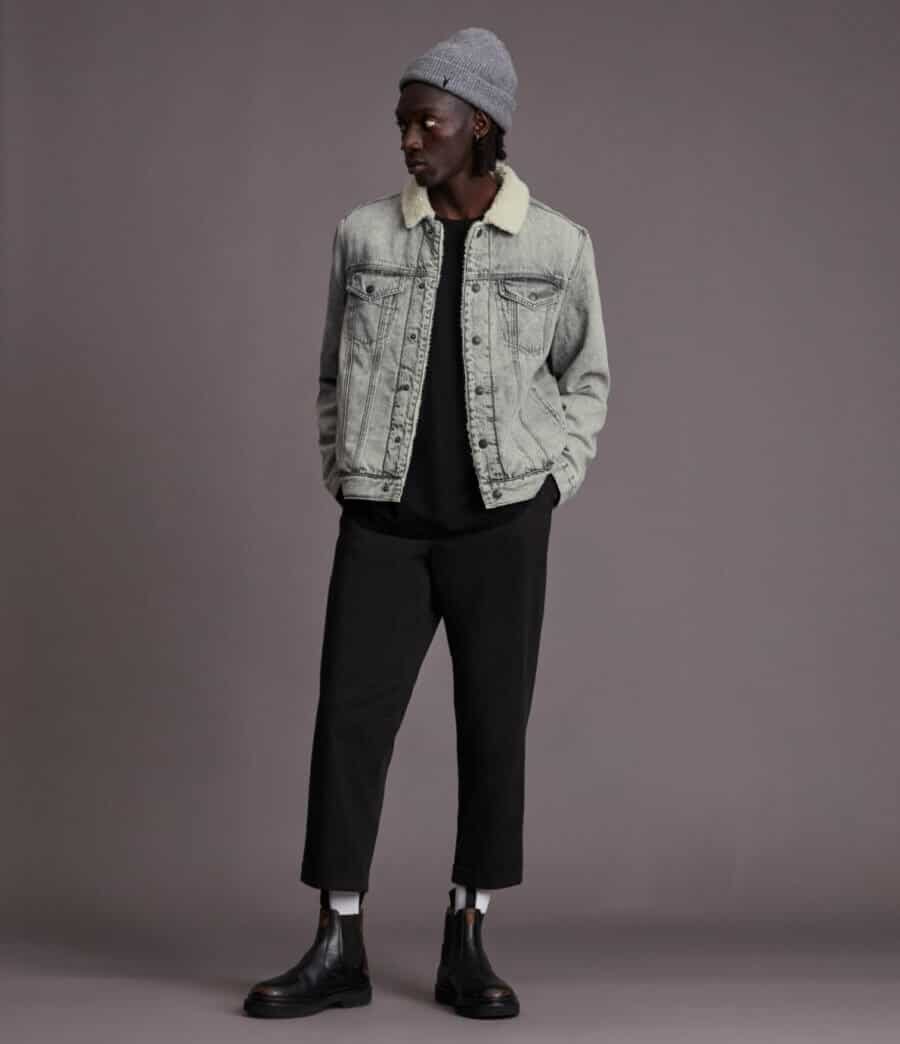 Chelsea boots work best with trousers that are hemmed slightly short, which allows you to see the distinctive silhouette of the boot. You at least want to be able to see a bit of the ankle, but you can push things a step further and go for cropped trousers.

Keep the rest of the outfit simple with a denim jacket and a black tee and you can’t mess it up. 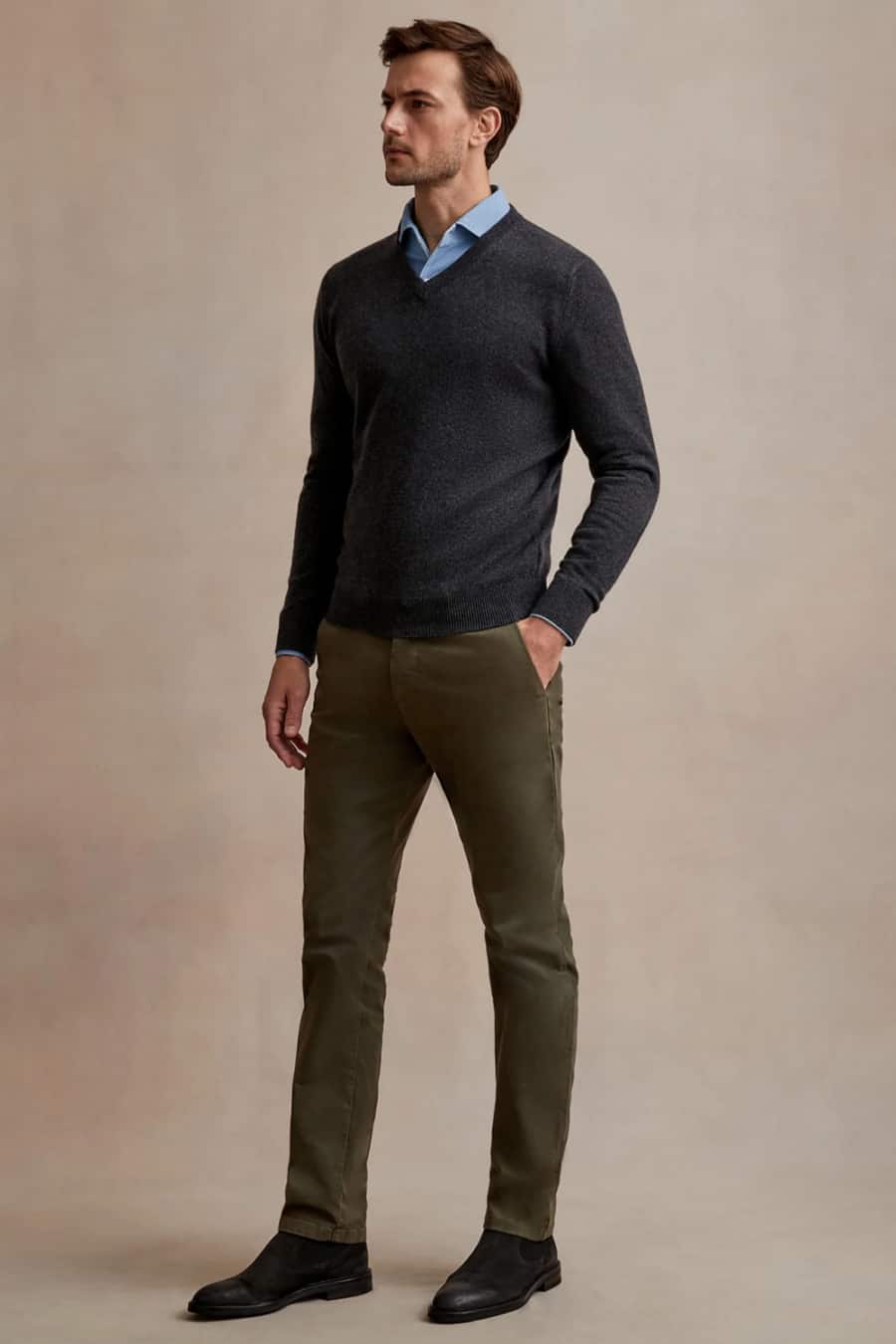 Most offices no longer require you to wear a suit, and you can likely get away with a smart pair of trousers and a shirt combined with a pair of Chelsea boots. Just ensure yours are on the slimmer end of the spectrum, and ideally in brown leather.

With a T-shirt and jeans 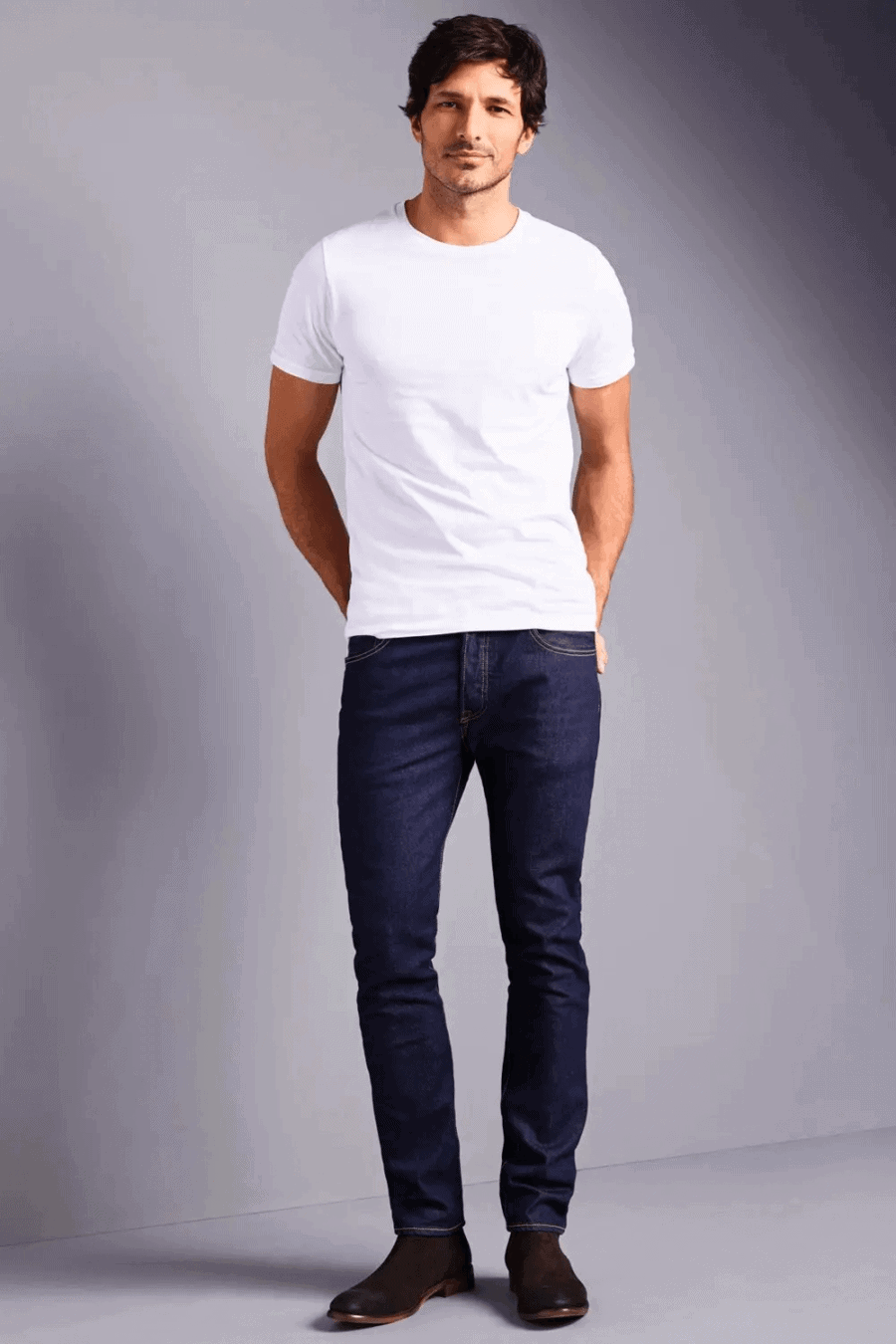 Some of the best outfits are the most simple. A basic T-shirt and jeans combination rarely fails, especially if you nail the fit of both. The Chelsea boots are the finishing touch, smartening the look slightly and giving it a refined edge that wouldn’t be possible with sneakers. 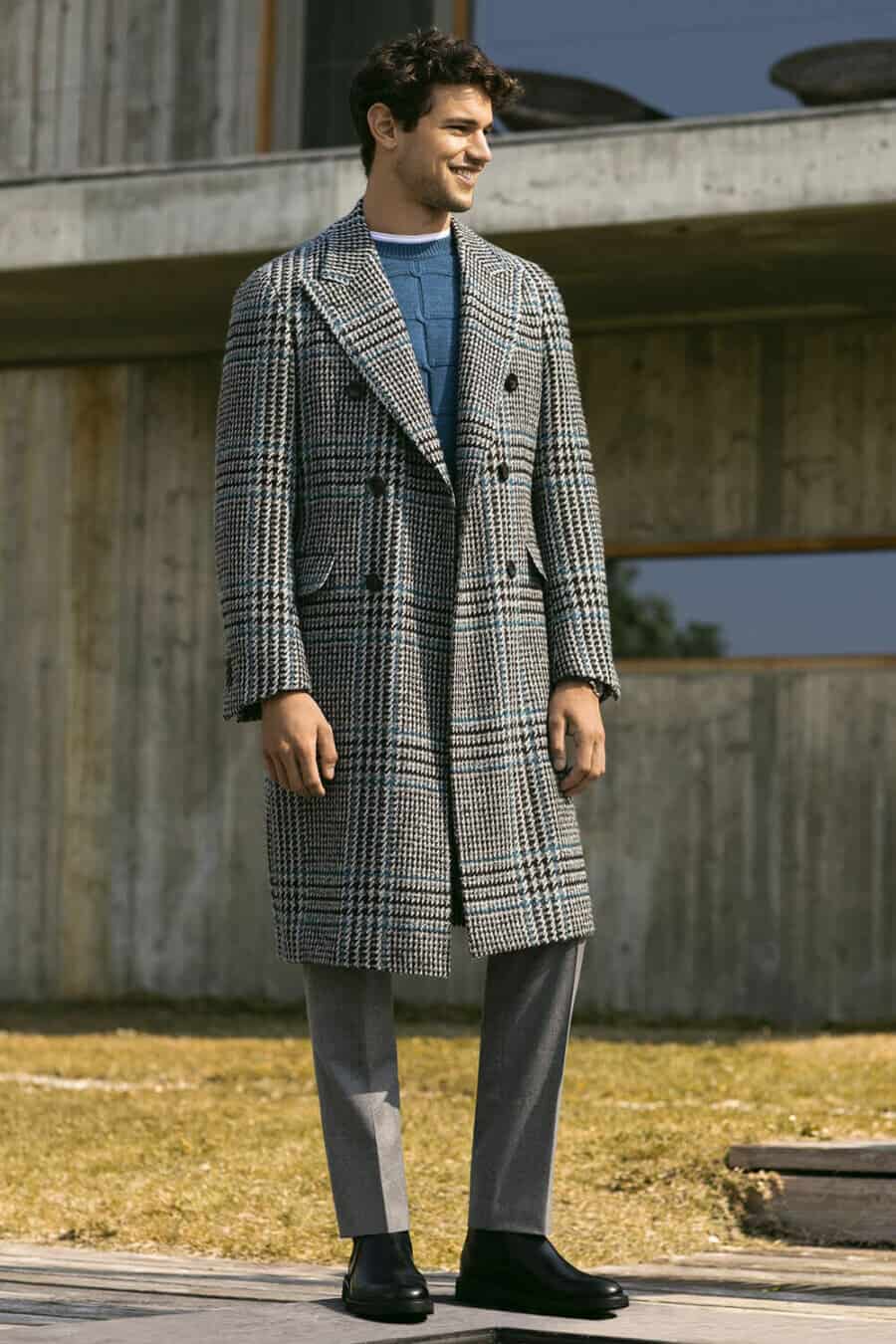 Black leather Chelsea boots perfectly complement tailoring, especially in dark colours. But black can also work with light and mid greys, as shown by this sharp outfit. Notice the black and blue check in the coat that references the blue of the jumper and black of the boots, help tie the outfit together. 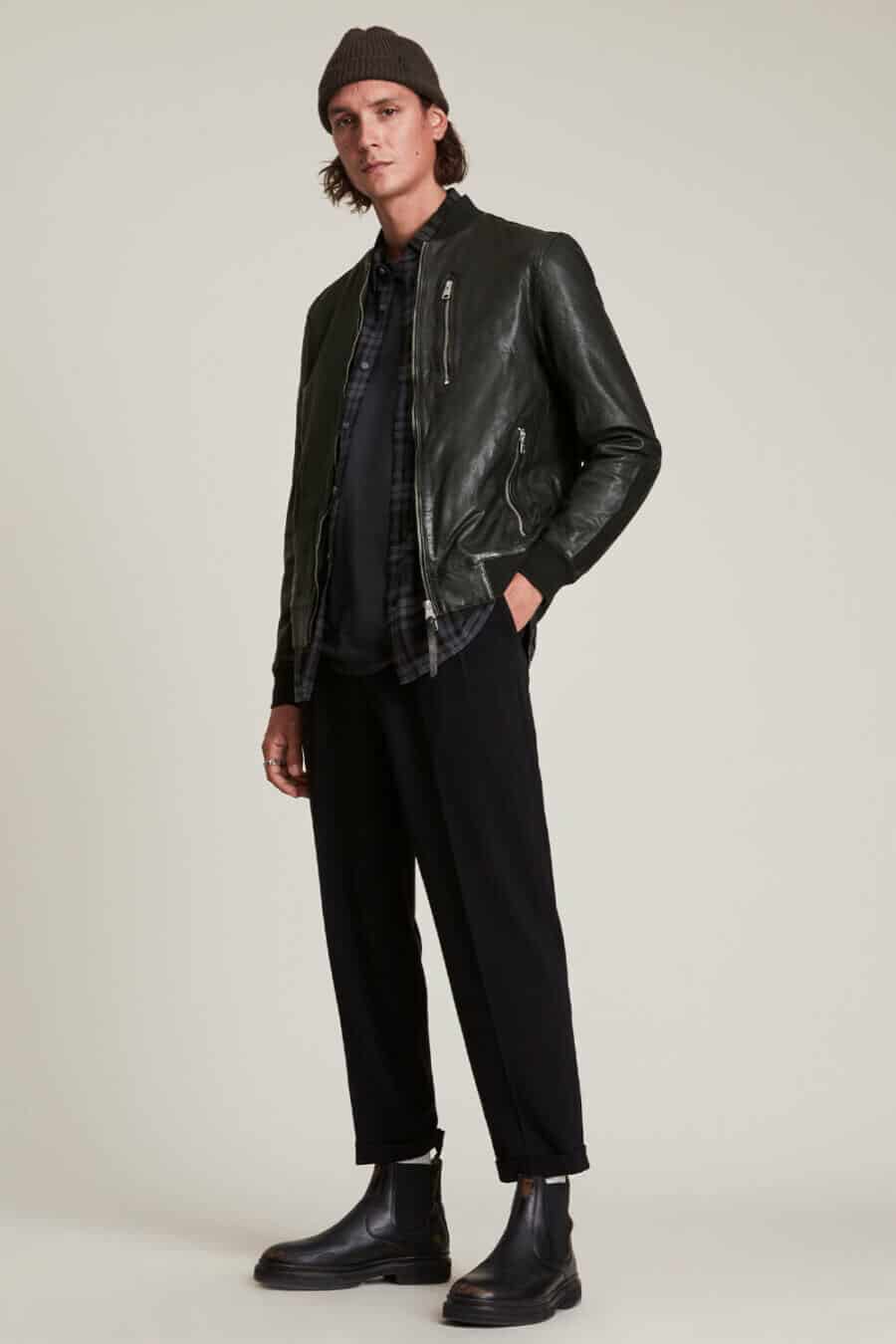 Commando-soled Derby boots have long been the shoe of choice for alternative scenes – look at old photos of Teddy Boys, punks and skinheads and you’ll see for yourself. However, Chelsea boots can provide a similar effect when finished in waxy black leather with a chunky rubber sole.

Team them with a leather jacket, flannel shirt and tailored trousers for a look that references the aforementioned subcultures but in a more refined, contemporary way. 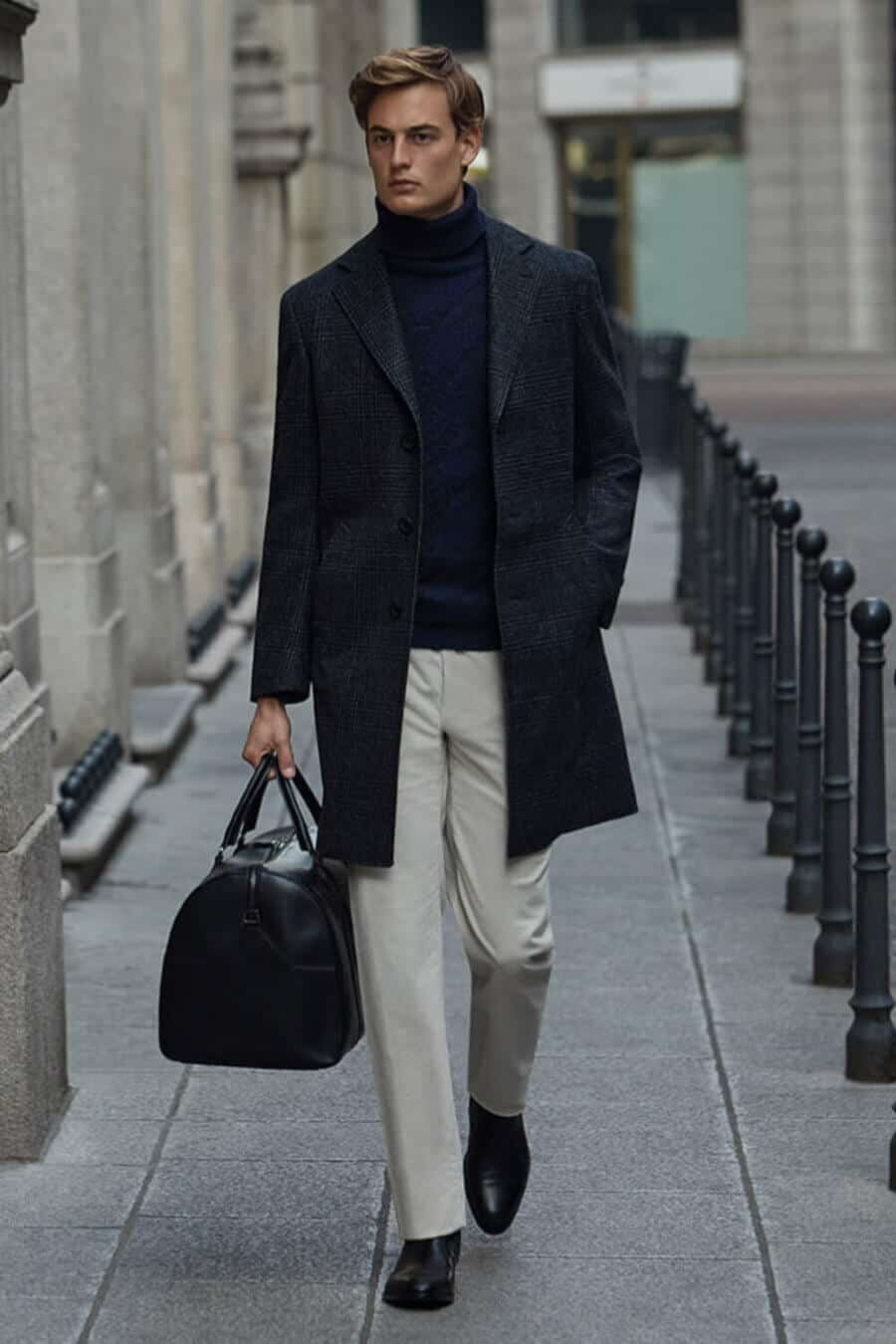 There’s a level of sophistication to Chelsea boots that most other boots lack. It means they’re a natural match for equally sleek clothing including single-breasted overcoats, turtlenecks and tailored trousers, which combine for a smooth city look, ideal for work or pleasure. 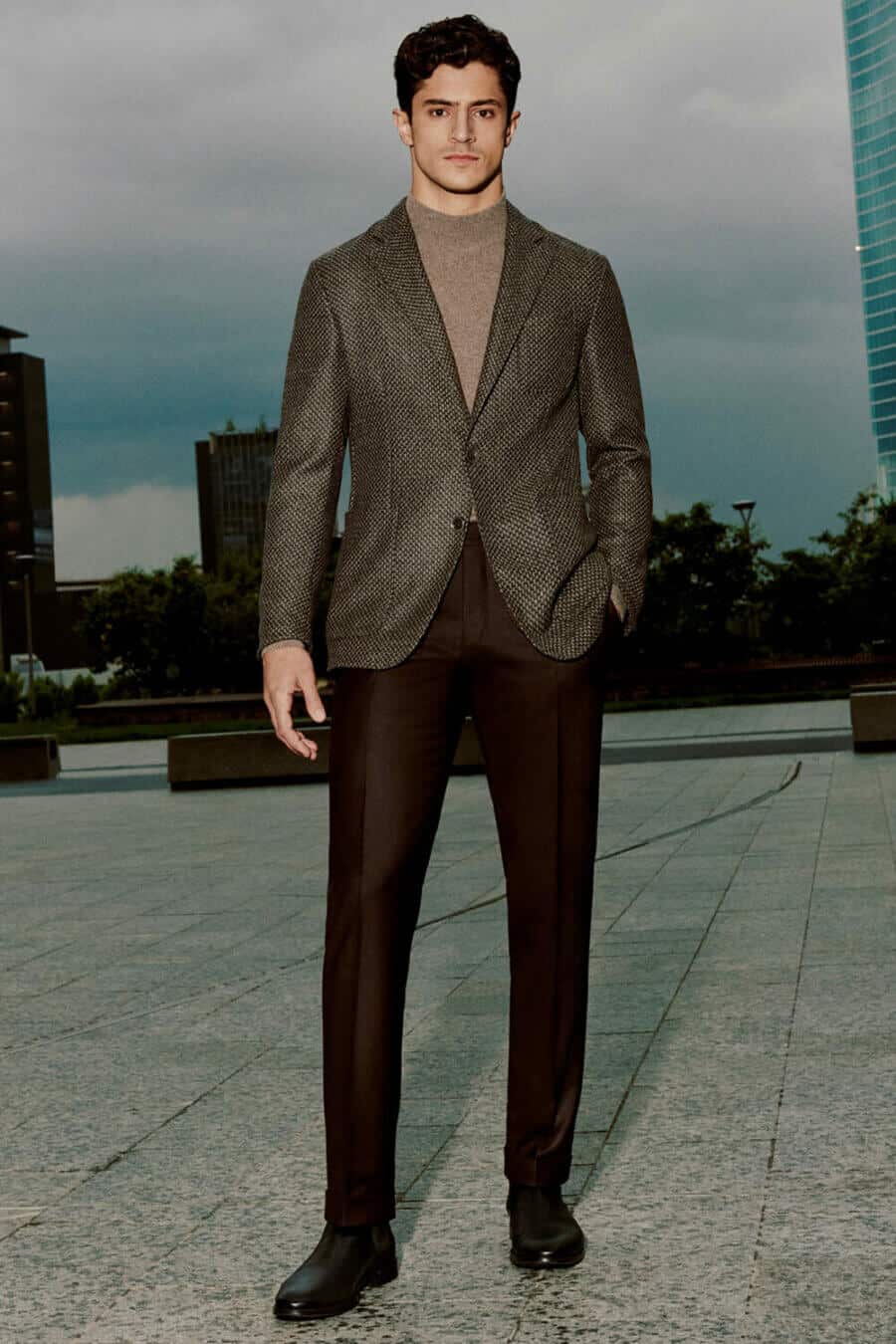 Separates (i.e. non-matching blazers and trousers) are perfect for times when you need to be smart but not too stuffy. But an outfit is only as good as its shoes, which is where Chelsea boots come in.

Try wearing yours with a tonal look consisting of a taupe mock-neck jumper, a grey-brown blazer and dark brown trousers. 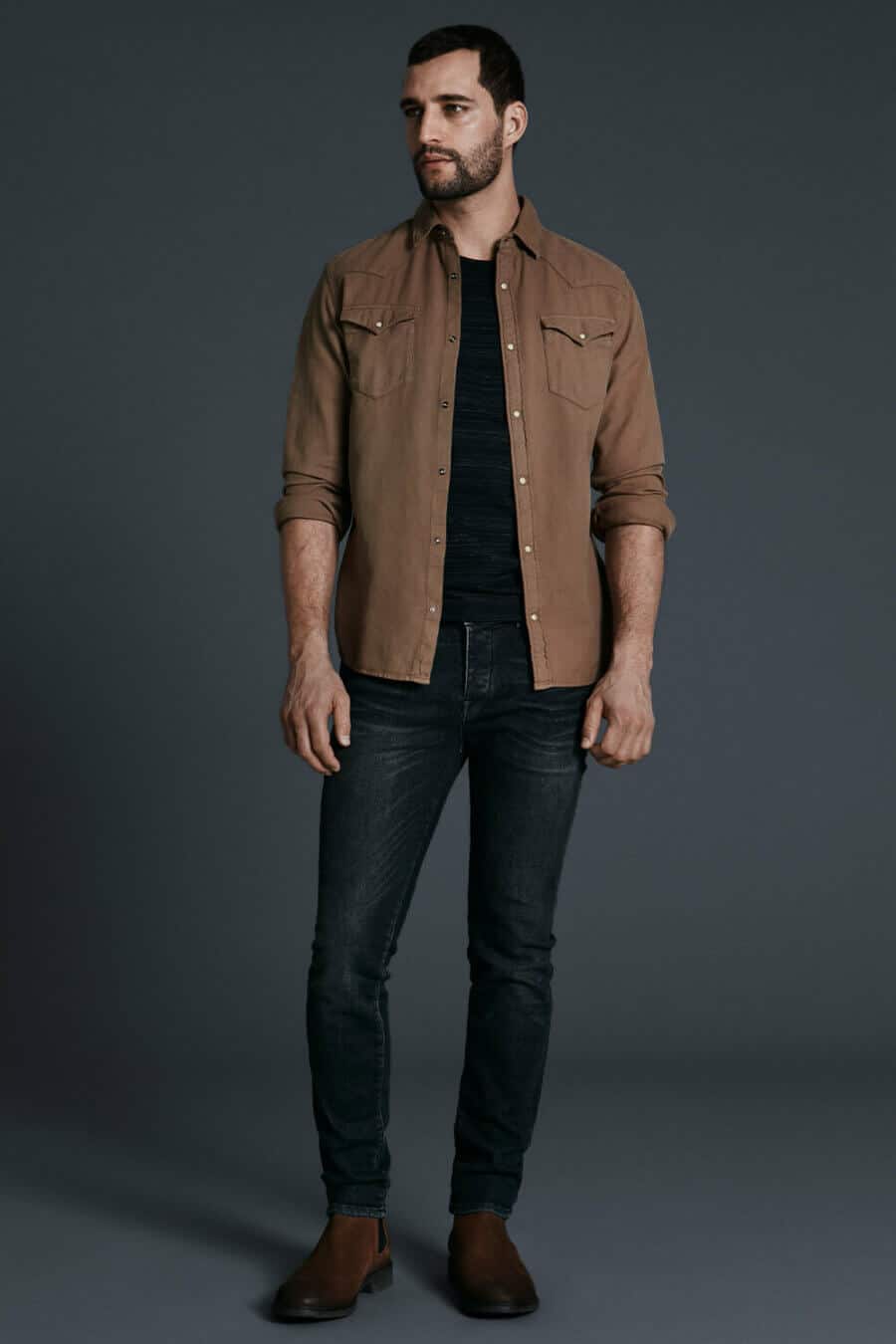 Given that Chelsea boots were originally designed for function, it makes sense they’d slot seamlessly into a workwear look. For your own take consider a brown leather pair and wear them with dark denim jeans, a light brown denim shirt and black tee. 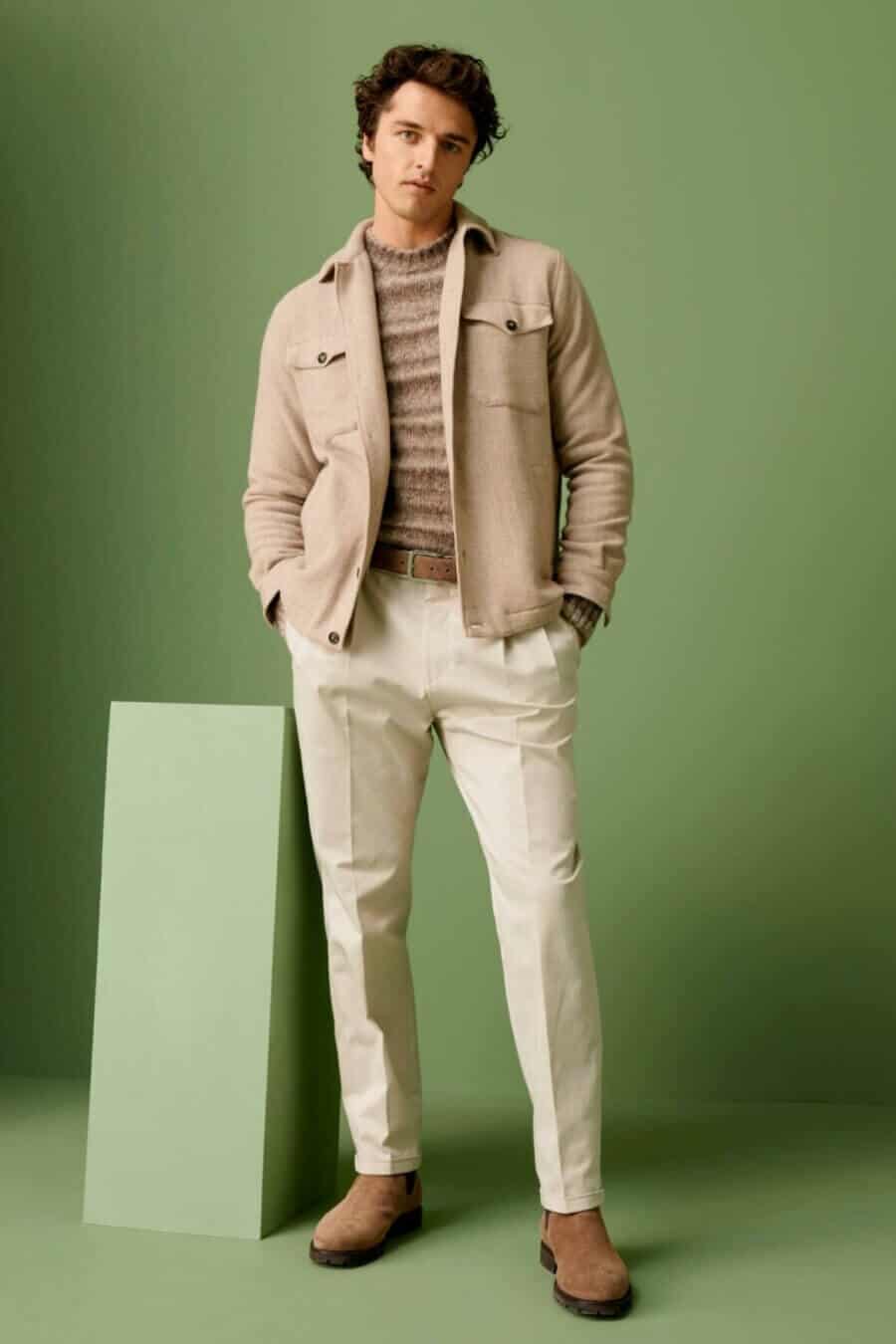 Chelseas are one of the few boots that actually look good in light brown or stone coloured suede. If going for a pair yourself, try wearing them with equally earthy pieces such as off-white trousers, a brown striped mock neck and a stone coloured overshirt for a confident take on tonal dressing. 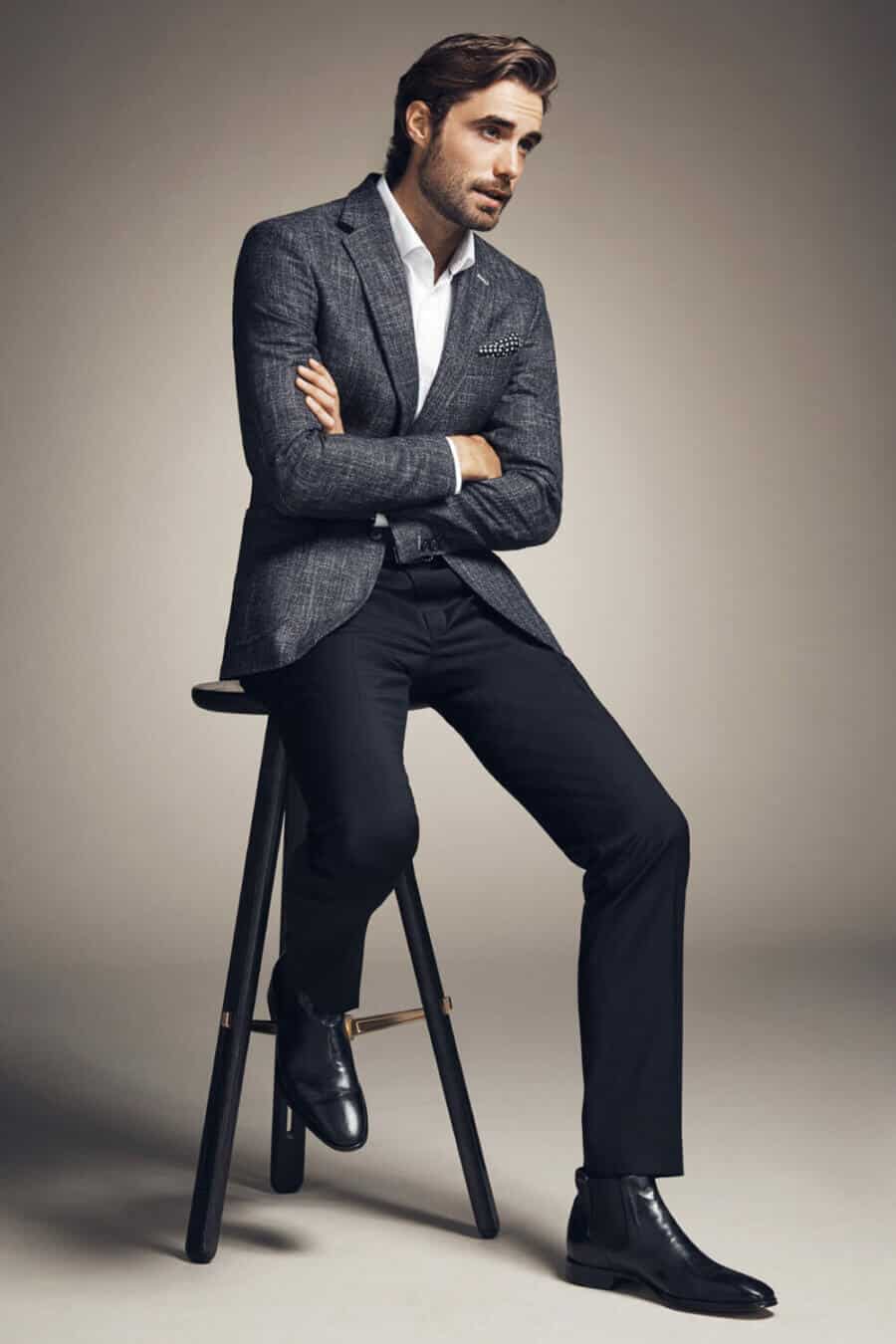 A soft, Italian-style blazer is tailoring at its most relaxed, and tends to look its best with open-neck shirts and loafers. Wear such a jacket with Chelsea boots though and you’ll find they add an instant refinement to it, especially when finished in black leather. 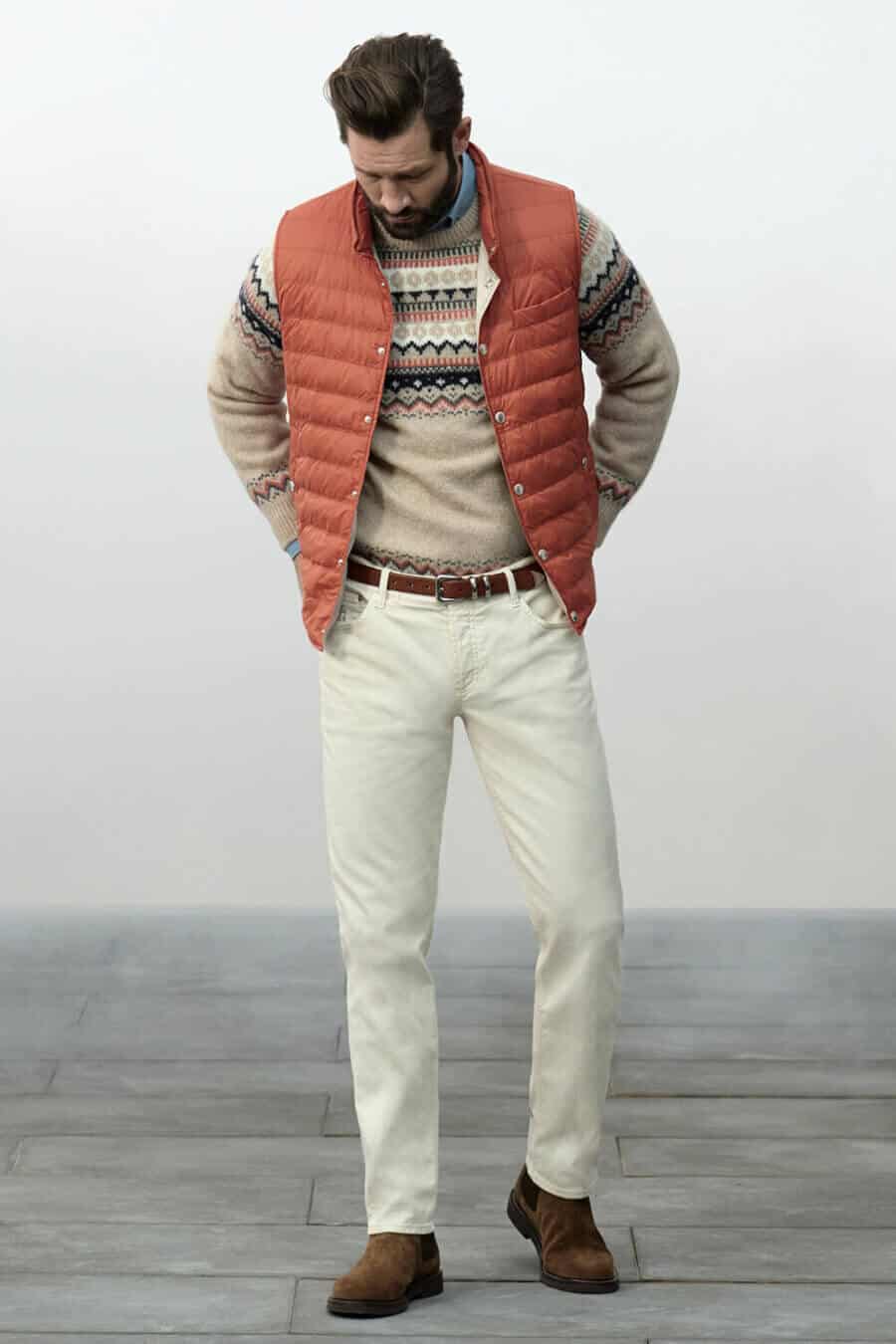 If you’re going to buy just one pair of Chelsea boots, it’s hard to go wrong with brown suede. They’re the perfect base for many a look, from tonal tailoring to something that incorporates more colour, as shown above.

This orange gilet, Fair Isle sweater and white jeans combination is anchored by the boots, which keeps it from becoming too fussy. 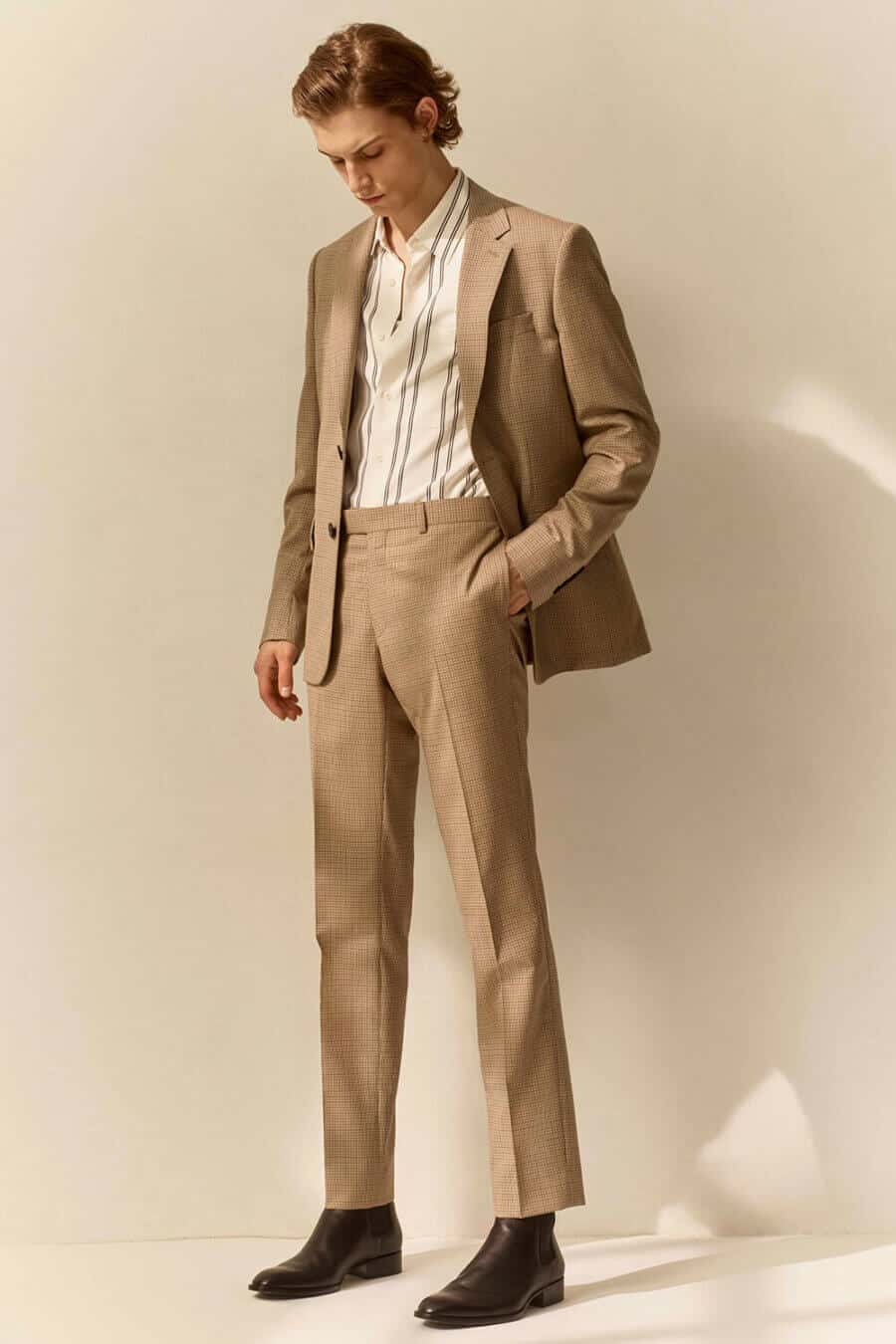 Chelsea boots were popular in the 70s following their approval by The Beatles a few years prior. For a look that harks back to that golden era, try a strong shouldered, stone coloured suit combined with slick brown Chelsea boots and a striped shirt. 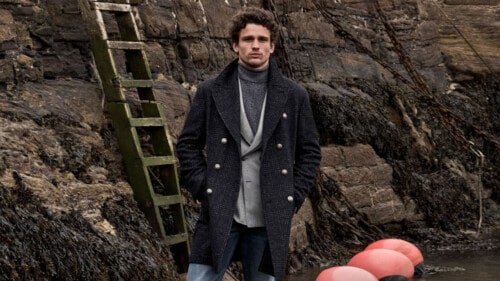 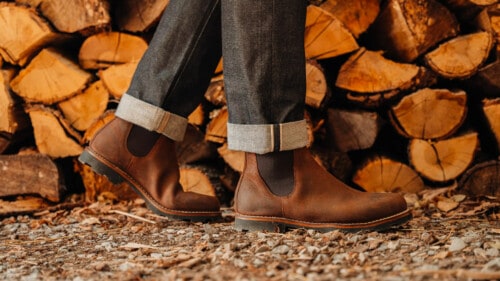 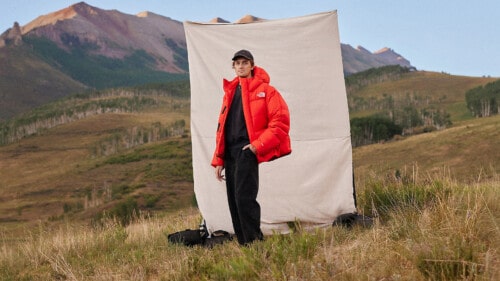 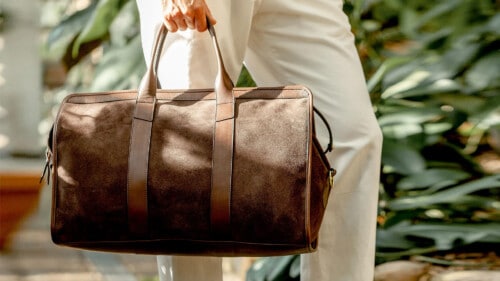