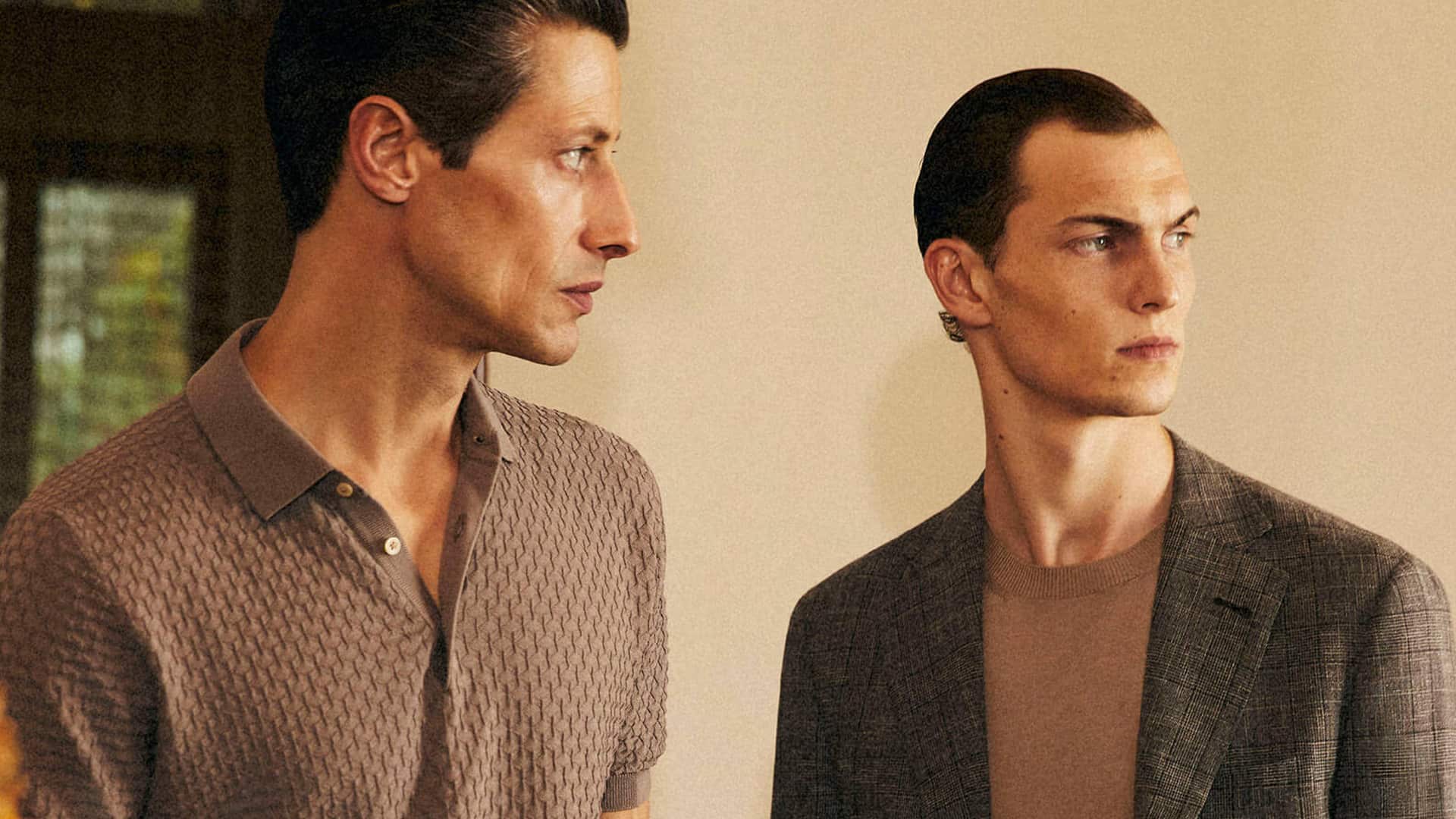 From a new relaxed approach to tailoring to the birth of modern-day style tribes, 60s fashion really did have it all going on.

You might not think of the 1960s as the most exciting decade for men’s style, but it really did have it all going on. In just 10 years, they invented James Bond, The Rolling Stones and The Beatles took over the world, and preppy Americana firmly established itself as one of the key styles of the 20th century. It was during the 60s that modern-day staples like Chelsea boots and Harrington jackets emerged, while tailoring was reinvented not once but twice.

From the minimal suits of the early part of the decade to the extravagant dandyism of the latter half, 60s men’s fashion reflected both the starch-pressed establishment and the irresistible youth movements and pop culture that rebelled against it. They all continue to inspire designers to this very day.

Here, we break down the key 60s trends and offer advice on how to wear the decade’s most stylish exports.

The best thing about the 60s might just be the tailoring. The early 60s suit is still an incredibly alluring thing, and because of its simplicity, feels perfectly contemporary even now. Anyone who’s watched Mad Men and observed the pared-back tailoring of its early seasons will attest to the fact this is a look worth emulating.

The minimalist 60s suit is very much a carry over from the 50s, in that it’s simple and conservative, but there are a couple of ways it differs. Early 60s designs were slimmed down and more flattering than the boxy, sack-style versions of the 50s. They featured slim, notch lapels, a two- or three-button front, twin vents and a shorter body which helped elongate the silhouette.

The trousers were also slim and boasted a mid rise, usually without pleats for a more streamlined look. And the colour palettes were equally muted, with navy, dark grey and brown proving popular in the day.

Due to the fact that they were classic and minimal in design, early 60s suits look just as stylish today. Not too slim, not too relaxed, they are the perfect middle ground and work for a wide variety of body shapes. Look for a classic, mid-structured suit that’s neither too soft or too padded, and keep the accessories to a minimum, allowing the cut to take centre stage.

Even more relevant than the 60s suit is how men began to dress it down. The 50s was all conservative with its starched shirts and crisp silk ties, but the 60s moved things on, introducing new ways to wear tailoring. Shirt collars became softer with the button-down Oxford shirt an emerging style staple, while knitted ties proved especially popular following appearances in the Sean Connery Bond films.

It’s when shirts and ties were eschewed altogether that things got really interesting. Turtlenecks were often worn in place of shirts, giving suits an even more streamlined, minimal feel, while polo shirts were utilised on weekends, when strict business attire wasn’t necessary.

Both of these are perfectly acceptable to wear with a suit today, but back then it was an extremely modern look. To emulate it, opt for a knitted polo shirt worn under a two-button blazer and neutral chinos, and finish with a pair of Chelsea boots. It’s an outfit that’s minimal, contemporary and wholly 60s inspired.

From cardigans to knitted polo shirts and roll necks, the 60s took knitwear mainstream and made it a genuine option for both casual and formal wear.

For anyone not wanting to wear a full suit, the cardigan became a viable alternative, worn over a shirt, tie and tailored trousers. It added a potential pop of colour in a way that a blazer couldn’t, giving tailored looks a more contemporary, younger feel at the time. They were produced in a wide variety of natural fibres, before man-made polyester blends became the norm in the 70s.

Merino knitted wool was particularly popular, but so too were mohair cardigans (a key fashion trend for 2022) which offered a more playful take on the style with their slightly fluffy, incredibly soft look and feel. Meanwhile, cable-knit styles became popular on America’s Ivy League campuses and have yet to leave our collective wardrobes.

The birth of style tribes

The second half of the 60s saw the increasing popularity of the psychedelic movement, with its trippy music, loud graphics and free-living drug culture that built the foundations of the 70s hippy aesthetic. The Beatles began to go off-piste with their own albums, aggressively moving away from the clean-cut, politically-correct boy band they were at the start of the decade. And this kind of experimentation filtered down into the wardrobes of the everyman.

The clean lines of minimalist tailoring were replaced with wide-lapelled, brightly-coloured velvet jackets, while the crisp shirts and knits of the mods disappeared in place of ruffled shirts and silk neckerchiefs. Trousers became wider, patterns replaced monochrome and things started to all go a bit mad.

Perhaps the most influential aspect of all of this was the cementing of fashion as a key part of self expression and individualism. Whether you were a surfer, a tie-dyed proto-hippie, a preppy college boy or a rock ‘n’ roll dandy, there was a look for you. And frankly, all of them are still referenced on a seasonal basis in one corner of menswear or another.

Sixties grooming can be divided into two parts. The first few years of the decade were still relatively conservative, with much of the tradition of the conformist 50s carrying over. This meant many men, particularly professionals, stuck with the slicked-back, side-part hairstyle that dominated in the decade prior. For those after a classic 60s-inspired ‘do, this is the one to go for, and it’s easy to achieve.

You’ll need short- to medium-length hair that’s relatively tight on the sides and fading up to a longer length on top. Start with damp, towel-dried hair and apply a small amount of clay or cream to the roots, before mixing into the rest of the hair. You can use a comb for the next part, but doing so can make the side part look overly slick and a bit too neat today. Instead, use your fingers and sweep your hair over from left to right, creating a gentle, loose part on the left side of your head.

The second half of the 60s saw all manner of men’s hairstyles, quite literally, grow in popularity. There were the bowl-like cuts of The Beatles, the long, shaggy mops of the Stones, the large afro styles of Jimi Hendrix and the wilder mullets of the late 60s, which led into the 70s. If you’re bolder (and have plenty of time in your morning schedule) you can still give them a try today, too.

One of the most versatile lightweight jacket styles you can own, if you’re going to invest in just one garment from this list, go for a Harrington. Easy to wear and ideal for dressing up or down, the Harrington is simple in design but also practical. Its collar buttons up to a funnel neck for added protection against wind chill, while it’s often available in waterproofed cotton fabrics, making it perfect for sudden downpours.

The jacket zips up to the neck, while the elasticated hem provides a comfortable, snug fit that sits just above the waist. A favourite of Steve McQueen during the decade, this is a style that works just as well with indigo denim jeans and chukka boots as it does tailored chinos and loafers.

Arguably the definitive footwear of the 60s, the Chelsea boot is an undisputed style classic. Said to have been created for Queen Victoria, who demanded her shoemaker craft an elasticated leather boot she could slip on and off for horse riding, the Chelsea enjoyed great popularity among the Swinging 60s set, who’d parade up and down the King’s Road in Chelsea, London giving the distinctive boot its name.

Everyone wore the style in the 60s, from The Beatles and the Stones through to Michael Caine and Bob Dylan. It’s easy to see why. The boot’s streamlined silhouette made it incredibly adaptable, while its elasticated side gusset made it far more comfortable than many stiff leather shoes of the time.

The Chelsea is no less stylish today and can be picked up in all manner of shapes and finishes, from high-shine slim leather models best suited to formalwear, to waxy leather, chunky rubber soled versions perfect for wearing with denim and equally rugged outerwear.

If you don’t already have a couple of knitted polos in your rotation, you’re missing out. The simple design is more relaxed and laid back than a traditional shirt, yet smarter than a sporty pique polo, making it something of an in-between item. They work well with shorts and sneakers in the spring, but also add a nonchalant, dressed down element to a suit, making them a versatile addition to your wardrobe.

A favourite of the mods in the 60s, who’d wear them with tailored trousers and desert boots, they’ve long been utilised by those who want to look smart and well put together, yet simultaneously relaxed in a way that few garments can offer.

Look for one cut with a tailored fit and crafted from a soft merino wool or cotton-blend, which is both soft against the skin and incredibly breathable, ensuring you’ll stay as cool as you are stylish.

Another shoe that was incredibly popular in the 60s, penny loafers really took off following their adoption by the Ivy League set, who’d combine them with club blazers, chinos and sweatshirts on their elite college campuses on the east coast of America.

A crucial part of the preppy look, penny loafers are easy to style and comfortable, perfectly complementing a range of smart casual outfits today. Defined by their vamp detailing, which traditionally has a cut out that fits a single penny coin, the loafers began life as a Norwegian fishing shoe before being sold by GH Bass in America and later around the world.

They boast a throwback feel today, adding a bit of vintage charm to denim jeans or tailored trousers – just make sure to roll the hems or have them tailored so they’re sitting just above the shoes.

There’s no doubt about it, the Breton tee is an underrated style staple. Originally designed as part of naval uniform for French seamen, the Breton traditionally has 21 stripes to mark each one of Napoleon Bonaparte’s victories. More practically though, the design was used so that those who fell overboard could be easily spotted at sea. Quite how it became so popular in the 60s is a mystery, but popular it was with the likes of Andy Warhol, Brigitte Bardot, Pablo Picasso all wearing them throughout the decade.

The Breton hasn’t fallen out of favour since, and represents an easy style synonymous with the French Riviera and the photographs of Slim Aarons. Try wearing one today with a pair of navy swim shorts and brown leather fisherman sandals for a nod to both the sailors of yesterday and the iconic resortwear style of the 60s.