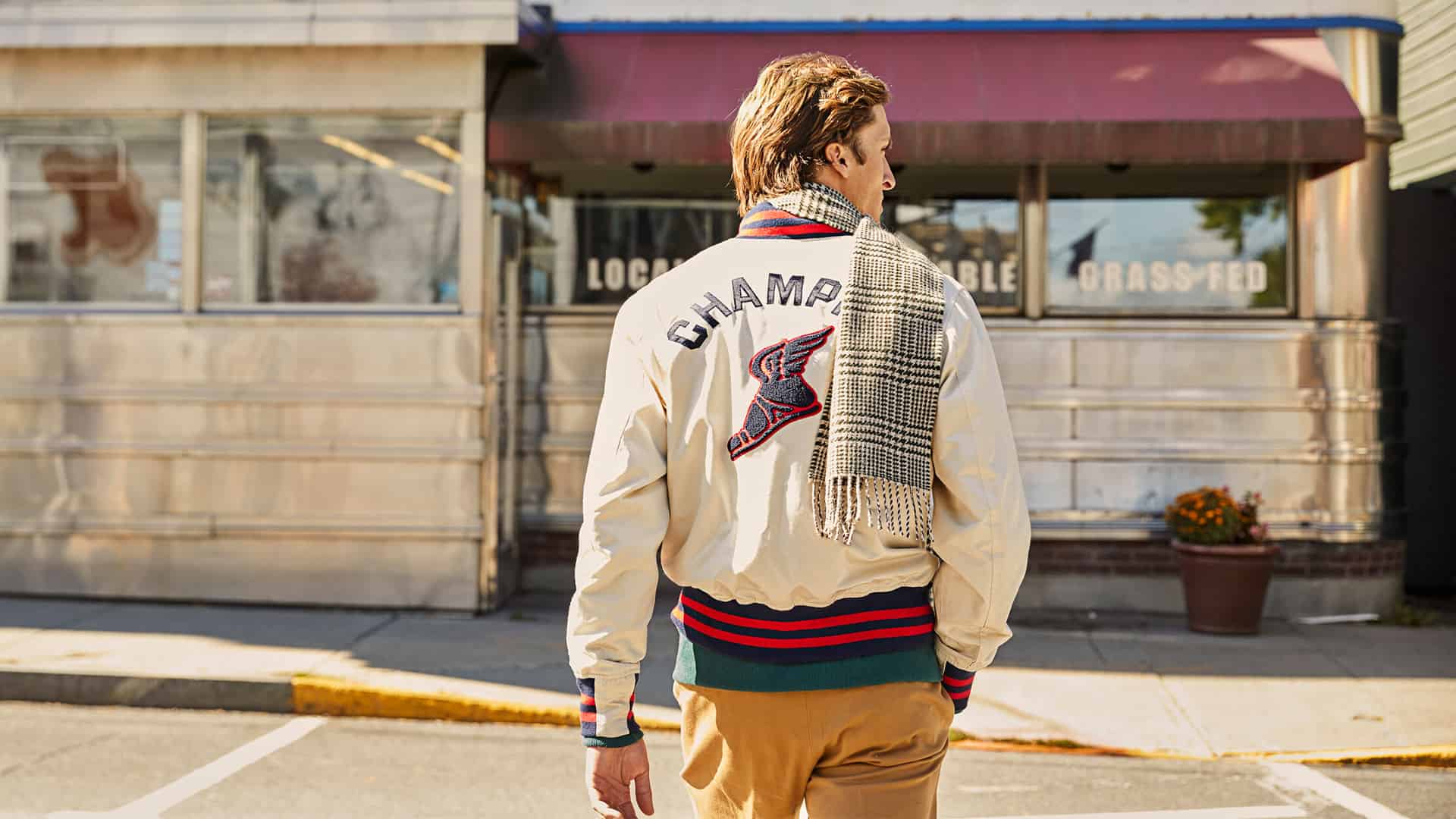 The 2000s were a confusing time for men's fashion, but there were some key trends and pieces that came out of the decade. These are the ones to integrate into your look today.

The 2000s were a long and confusing time for menswear. There was a lot going on, with rising music scenes like hip-hop and indie offering drastically different takes on style, just as Don Draper arrived to tell us all to wear starched 60s tailoring.

The decade began with Eminem, emo and boybands in patchwork denim. By 2009, we had rock stars wearing skinny ties under their leather jackets and proto-hipsters dressed head-to-toe in American Apparel. This was also Topman’s decade: 2000s menswear trends rose and fell with the birth of fast fashion as we know it today.

The maturation of the internet this decade also made it the first time you could research and refine your style online. Everyone had a profile picture for the first time as Facebook swept the world and dating went digital. Maybe an urge to show off online explains the many baffling ways of dressing.

There was the popped-collar polo shirt, trucker caps, Kanye’s shutter shades, skinny jeans tight enough to cut off circulation to your extremities and the ill-fated Justin Timberlake/Britney Spears take on double denim. These (and many of the decade’s other style choices) should remain firmly in the past, but there are a few that can work today.

From a new appreciation of sportswear to sportswear with tailoring to the rugby shirt’s reappraisal, here are the 2000s men’s fashion trends you can still pull off.

The 2000s was essentially a time of extreme fits. By the end of the decade, skinny-fit everything was in, but it began with hip-hop, emo and skatewear. Everything was oversized: sportswear, denim, boxy tailoring carried over from the 90s.

With the benefit of hindsight, we should never have gone skinny. Given the 20-year fashion cycle, you could argue that the infamous early 2000s paved the way for the boxy tees, loose denim and oversized outerwear we know and love today.

Taken as a whole, the 2000s was a decade of contrasts. Loose and skinny fits, razor-sharp tailoring and a boom in sportswear. Occasionally, menswear’s polar opposites clashed and high-low dressing looked cool, just as it had at various points in the 60s and the 70s.

A hoodie worn under a blazer was possibly the most visible example of this trend (and certainly more successful than, say, Pete Doherty wearing a red military tunic with skinny jeans). But there were others too. Remember David Tennant’s Doctor Who styling a pinstripe suit with Chuck Taylors? Minimalist sneaker pioneers Common Projects also launched in 2004. Clashing dress codes were cool, and still are.

Two besuited screen icons played a big part in turning the 2000s from an all-casual affair into an era that could dress up when the occasion called for it. In 2006, James Bond made his long-awaited return as Daniel Craig took up the tuxedo (and at least two other suits – all made by Brioni) in Casino Royale. Around the same time, Don Draper made his TV debut and gave the pocket square the kind of marketing that money can’t buy.

In both cases, the tailoring was cut slim to the body, sober but classic in a 60s, Rat Pack kind of way. For a generation of young men who’d been wearing hoodies and bootcut jeans, it was irresistible. Today’s tailoring is a little more adventurous, but if you want to play it safe at a wedding or job interview, Don and Bond are your archetypes.

A lot of outlandish styles appeared in 2000s menswear. But for all the fedoras, deep-V tees and boot-cut jeans worn with flip-flops, this was also the decade when men went back to basics. Call it the Gap-ification of menswear (which strictly started in the 90s), but there were some guys who spent the entire decade happy in a pair of jeans and a T-shirt.

Look at TV shows from the time like The OC or Lost and it’s just dudes in block-colour button-up shirts. Throw in hoodies, merino knits and maybe the odd pair of cargo pants and you’ve basically got everything you need. Yes, it’s rudimentary but don’t knock it. There’s something to be said for leaning classic with casualwear, especially when the alternative is (for example) wearing a white vest with a pair of extra-wide jeans.

If you were a rapper in the 2000s, you likely had a vast collection of vintage basketball and American football jerseys. Naturally, you’d wear these over huge white T-shirts and three-quarter-length denim shorts. Cue thousands of teenagers running out to their local thrift shop in an attempt to hunt down Mitchell & Ness Lakers jerseys.

And then there were velour tracksuits. Eminem was a major culprit here, but The Sopranos can carry some blame as well, with a whole host of characters from the show favouring velvety matching tracksuits. We’re not suggesting you copy either look, but the boon for throwback sportswear hasn’t gone away since. Try incorporating elements of 80s or 90s sportswear into your look, and you’ll instantly up your game.

Forget mechanical, fine watchmaking. The 2000s were all about digital. Perhaps it was connected to the rise in household tech, personal computers and mobile phones that were small enough to put in your pocket. Or maybe it was a result of the 80s revival that reverberated throughout the decade. Whatever the case, digital watches were big news.

The demand at the time meant many big-name watch brands revived the styles they created in the 80s. From calculator watches to more luxurious, stainless steel designs and even hybrids that incorporated classic, analogue watch faces with digital readouts.

Unlike mechanical watches, digital versions tend to have a sell-by date, dictated mainly by their battery life and how complex the tech is. It might be tricky to hunt down an original early 2000s digital watch, but there are plenty available on the market today – particularly from popular Japanese watch brands like Casio, G-Shock and Seiko.

In the mid-2000s the hoodie became a weirdly political item of clothing. Associated with antisocial behaviour in British inner cities, it was actually banned in some places. Then future Prime Minister David Cameron made a speech urging society to “hug a hoodie” as a means of reaching out to disaffected adolescents.

Whether you credit Cameron or the skate scene or the general boom in sportswear, the 2000s was the decade when a hoodie went from fringe item to must-have menswear. It was during the 2000s that you could legitimately wear a hoodie under a blazer or overcoat, as well as with jeans or sportswear.

Today, everyone has one, even politicians.

The 2000s’ best export might be relaxed-fit jeans. A continuation of the grunge movement of the 90s and the very thing that skinny jeans would react to later in the naughties, baggy, skater-inspired denim still looks good today. Back in the 2000s, they were sometimes worn too big at the waist, resulting in them sitting halfway down your backside, while the hems would be too long, meaning they stacked over your chunky DC skate shoes.

This is not the look we’re aiming for today. Instead, take inspiration from the 2000s and buy your next pair of jeans in a more relaxed, straight fit, as opposed to something slimmer. Ensure that the waist fits correctly, and roll the hems to sit just above your shoes or sneakers.

Fair warning: if you’re used to slim jeans, you might find it tricky to return to them once you’ve sampled more relaxed, straight cuts.

Beloved by everyone from preppy kids to jocks, so-called chavs and even young Kanye, the polo shirt was possibly the only top you needed at the turn of the millennium.

With its roots in tennis, designed to look smart while offering comfort and practicality, the polo has always provided an inherently sporty look. But the 2000s released the design from its sporting shackles, announcing it as the go-to smart yet casual T-shirt replacement.

Like the rugby shirt, it too may have been layered with other polos back then. Today it works best either on its own or worn underneath lightweight jackets like chore coats or Harringtons.

Just why cargo pants came about in the 2000s is a bit of a mystery. They were picked up by the skate community and worn by thousands of angsty teens, whether they skated or not. To be fair, it’s easy to see why cargo pants were popular for skating. The large pockets on either side of the thigh offered plenty of practicality, perfect for storing anything from wallet and keys to spare wheels.

At the same time, their typically baggy fit made them comfortable for all-day skating. The style originated in the military, so is a natural pairing for leather boots, but they work equally well with Vans or Converse.

Planning on trying them for yourself? Slim them down ever so slightly, and don’t be afraid to try the cargo’s more workwear-focused cousin: the carpenter pant.

There hasn’t been a decade where canvas sneakers haven’t been cool. But in the 2000s, with the rise of the indie music scene, the enduring popularity of skate culture and hip hop’s appreciation for the style, canvas kicks had a particularly strong decade. Everyone from Alex Turner to Snoop Dogg wore them at some point.

Whatever your relationship to the style in the 2000s, there’s no denying their continuing popularity today. Several brands have sought to upgrade classic designs, but the best are often the originals. It’s difficult to beat a pair of black Converse All Stars with black jeans and a tee, while classic Vans might be the most versatile sneakers around.

Whether you credit Don Draper, Barack Obama or somebody else, during the second half of the naughties men rediscovered the benefits of a well-tailored two-piece. Not too slim, not too wide, not too anything, it was boring by today’s standards, but it was – and still is – a formal and flattering way to dress.

Post-Covid, tailoring is reinventing itself but we’ll always have need for a go-to way of looking smart. Having a tailored, two-button jacket and matching trousers (preferably in navy or grey) is, even now, not a bad investment.

Like a lot of classic menswear, the leather jacket went on quite the journey during the 2000s. It started with The Matrix and Marilyn Manson – long cuts, goth styles, more colours than you might imagine. By the end of the decade, it was guitar bands in slim-fit racer and biker silhouettes that remained ubiquitous during the 2010s and the #menswear period.

Arguably it’s the former that better chimes with menswear in 2022, but whichever style you go for, the leather jacket will always be cool. Look for looser or boxier fits or throw in a suede version to get the most wear out of it today.