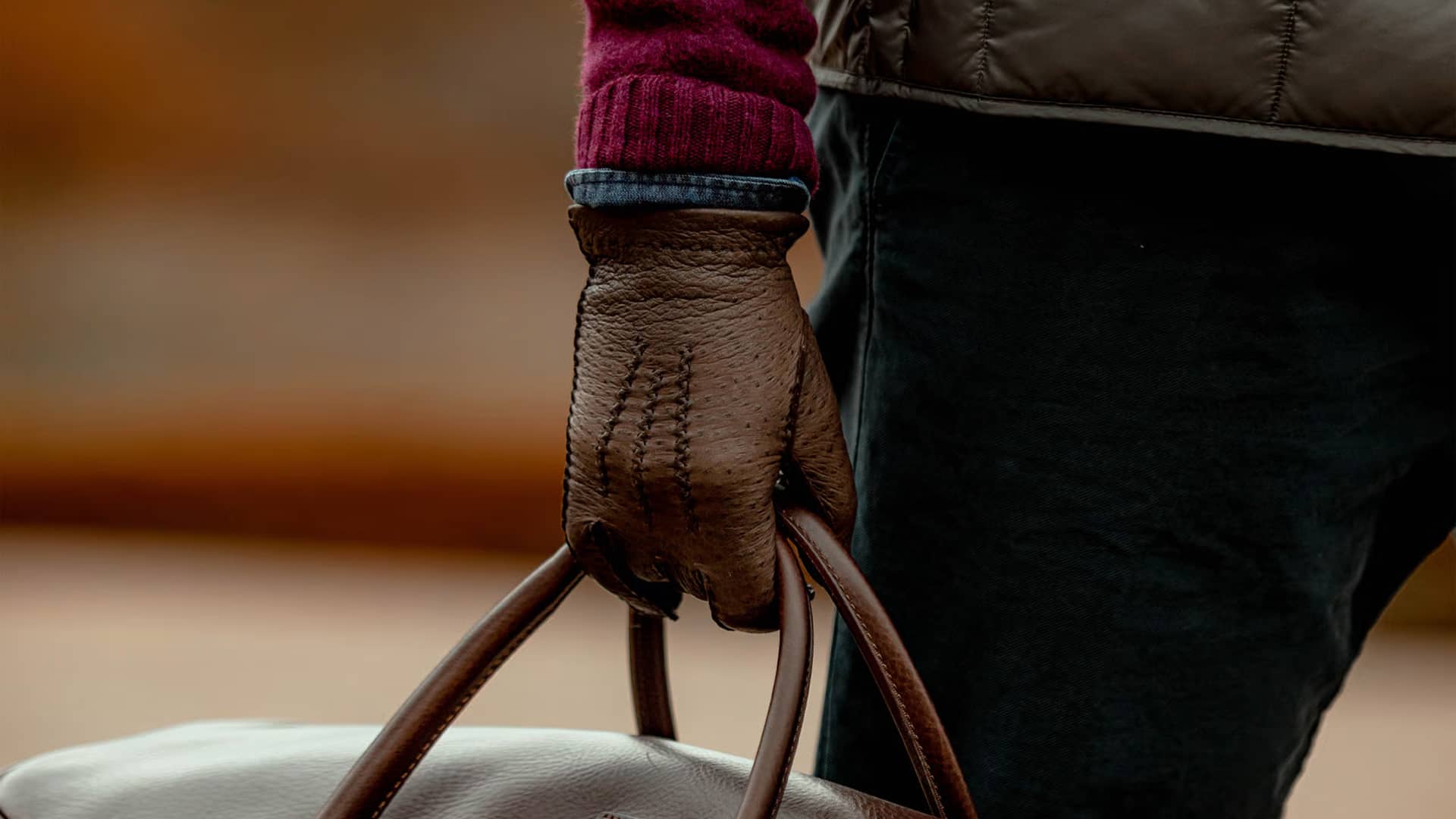 The Ultimate Guide To Men’s Gloves

Keep your digits warm this winter with an eclectic array of stylish and functional gloves from the very best makers around the world.

We probably only think about gloves once per year, and it’s always during that first cold snap of winter when we realise that we desperately need a pair. Of course, if you live in Scandinavia or somewhere unconscionably cold, putting gloves on your hands is as natural as putting shoes on your feet. But for the rest of us, it requires a little more cold-weather coercion.

These days, there are numerous styles and types of gloves that you can choose from, all of them tasked with the challenge of keeping your digits warm while also being practical, functional and stylish.

The key types of gloves for men 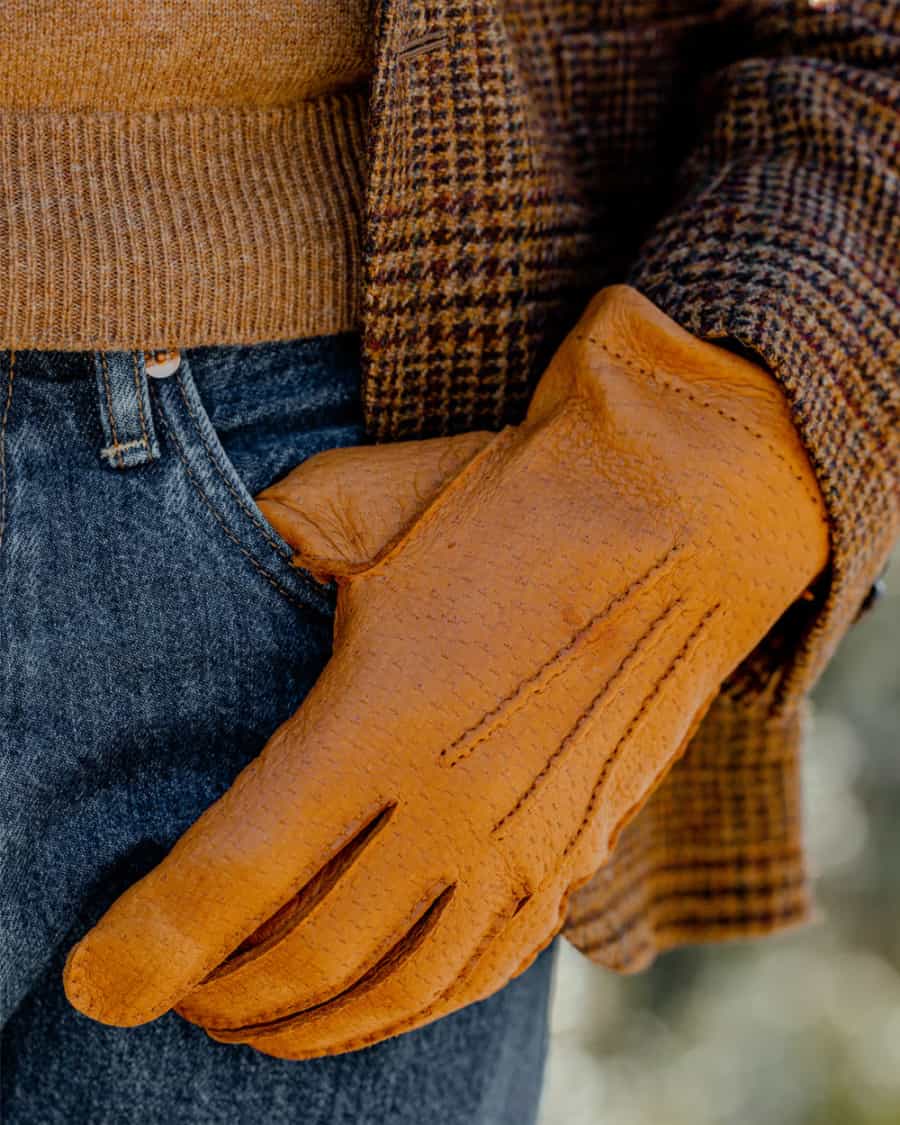 At the very top is the Peccary leather glove, recognisable for its three-prong pores pattern. Peccary is ridiculously soft and only gets softer with age and care. Due to the softness, it is only ever handstitched, hence why you’ll typically pay through the nose for it.

Next in line is Carpincho leather, which has a dotted pore structure that makes it slightly less formal than Peccary, but still just as soft.

Deer leather is a slightly more affordable luxury hide and has a pronounced grain pattern for a more rugged, outdoorsy aesthetic.

Finally, nappa leather is probably the most common and affordable. It’s also very thin and smooth, which makes it a good choice for pairing with sleek tailoring. 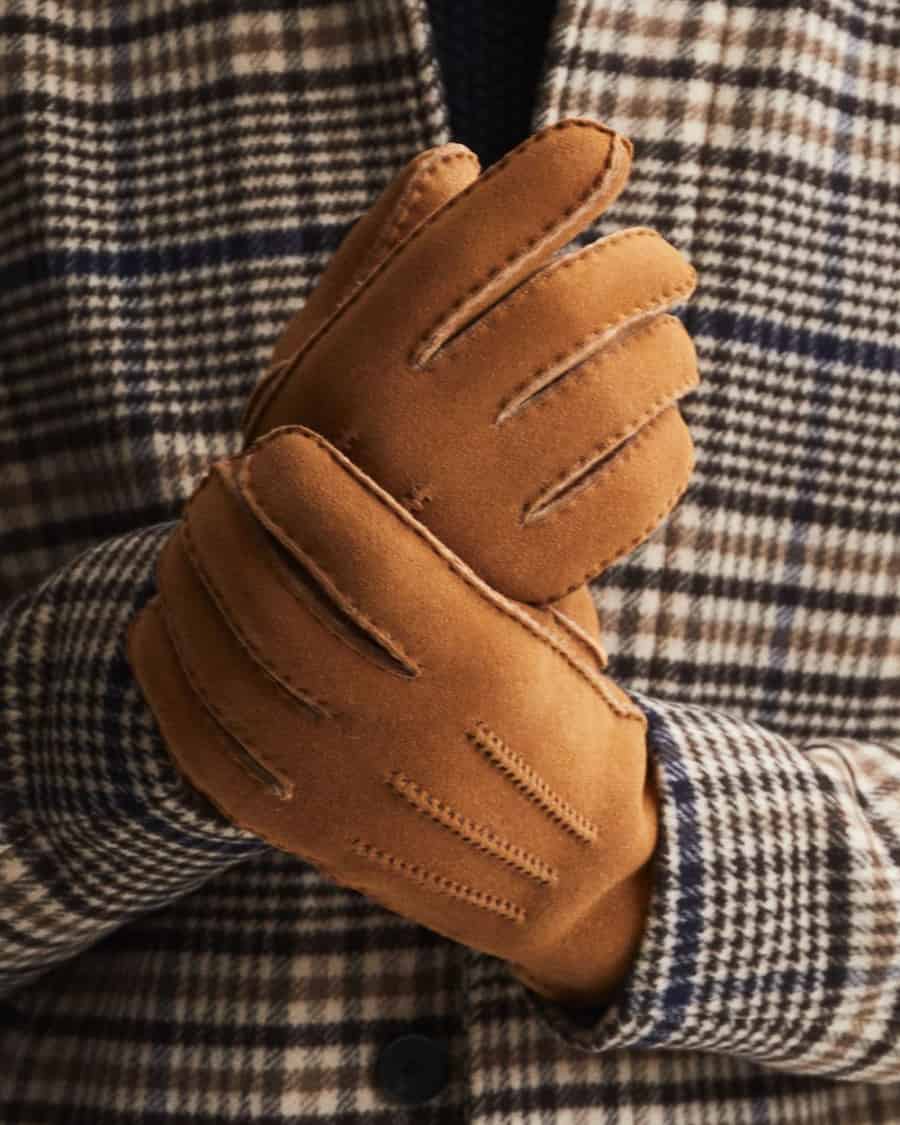 Just a casual step away from smart leather gloves is the shearling glove, a much toastier natural hide with a more outdoorsy aesthetic.

More commonly available in tan sheep hide with a dense shearling lining, these gloves are beyond warm and should only really come out in sub-zero temperatures. 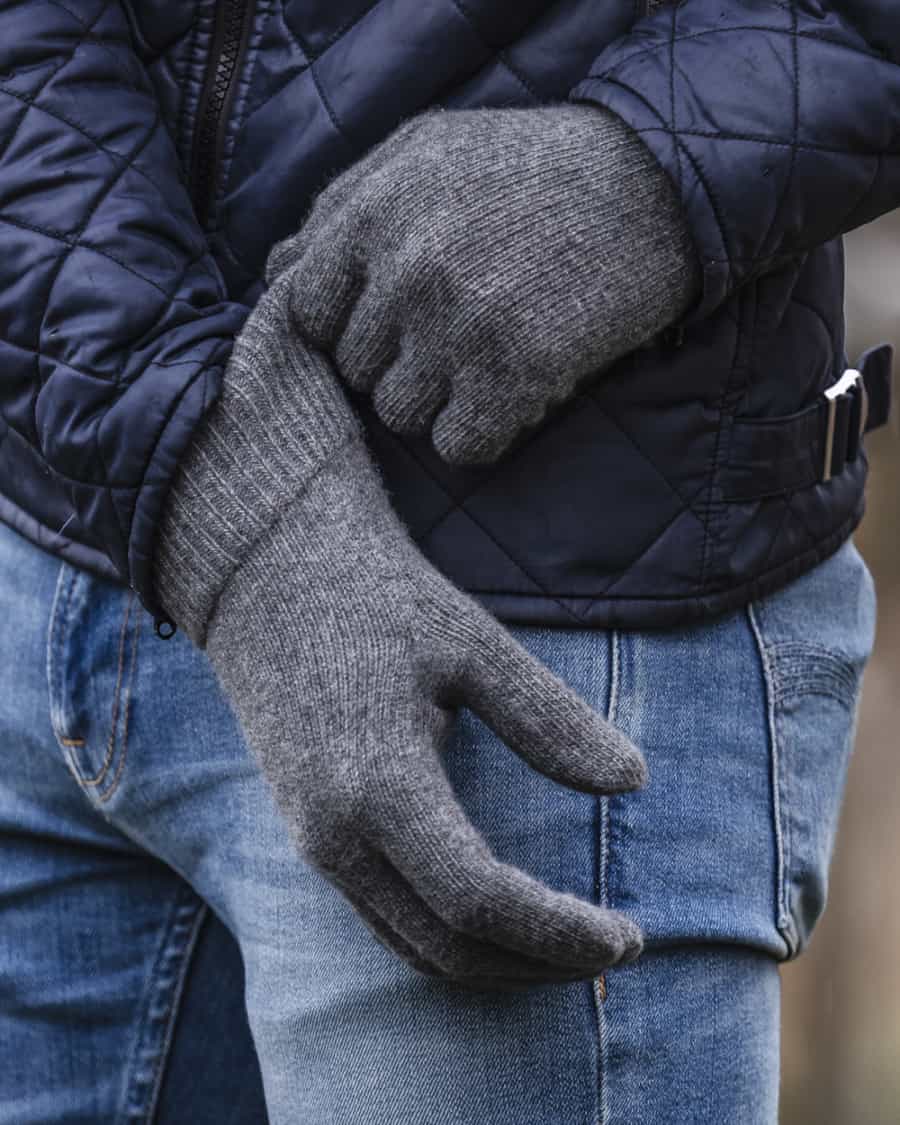 Everyone has owned a pair of woollen gloves at some point in their lives. They are the most basic form of hand warmer you can get, but don’t count on them to look after your digits in the coldest climates.

They’re a cheap and cheerful option available in every colour and pattern known to man, but just know they’ll be found wanting when the cold snap really hits. 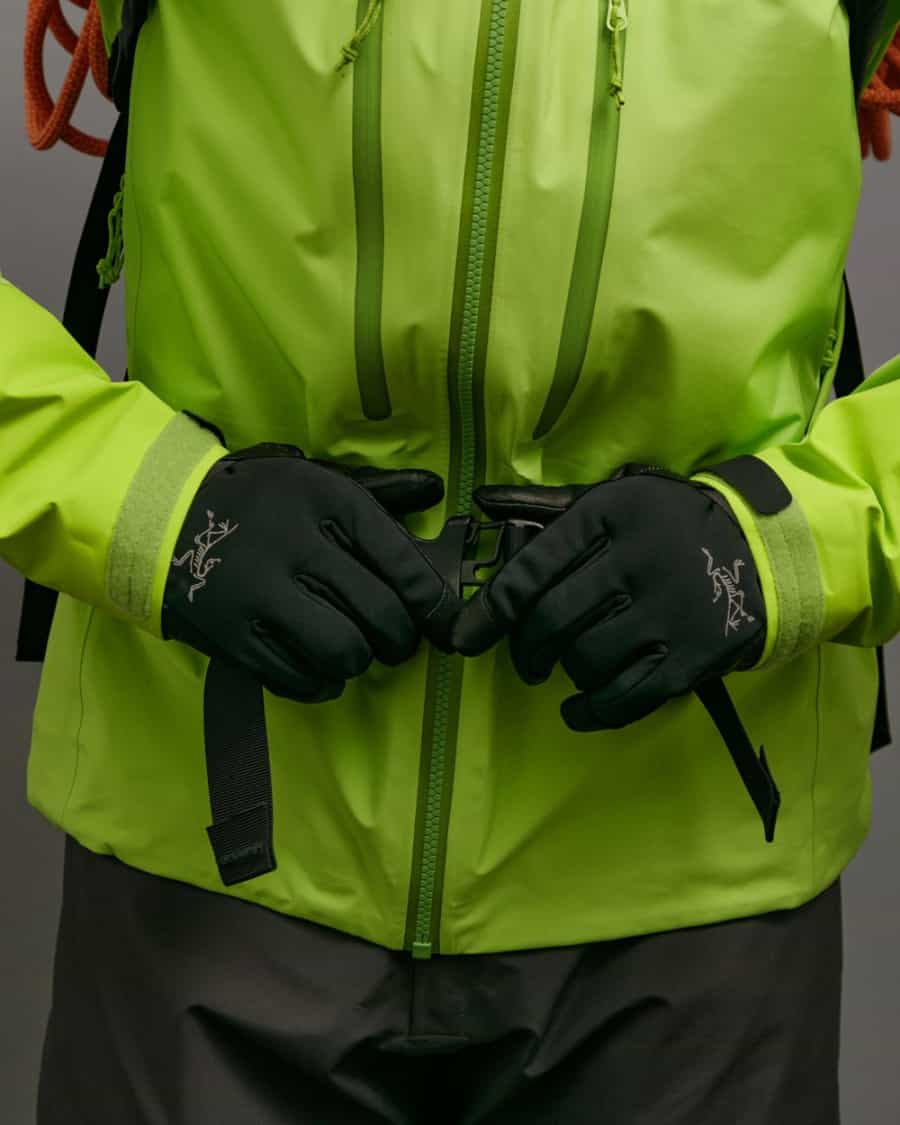 It’s a wide-ranging genre, but we’ll classify the rest as ‘technical gloves’ simply because they typically rely on man-made performance fabrics, rather than natural textiles.

They’re pretty diverse in style and functionality, too, from streamlined insulated urban gloves with touchscreen functionality, to backcountry styles loaded with high-tech textiles that will prevent you getting frostbite in Arctic conditions.

Either way, technical gloves have become really popular thanks to the trend of technical streetwear over the last few years, and as outdoors brands such as The North Face, Canada Goose and Arc’teryx have become more stylised for an urban consumer. 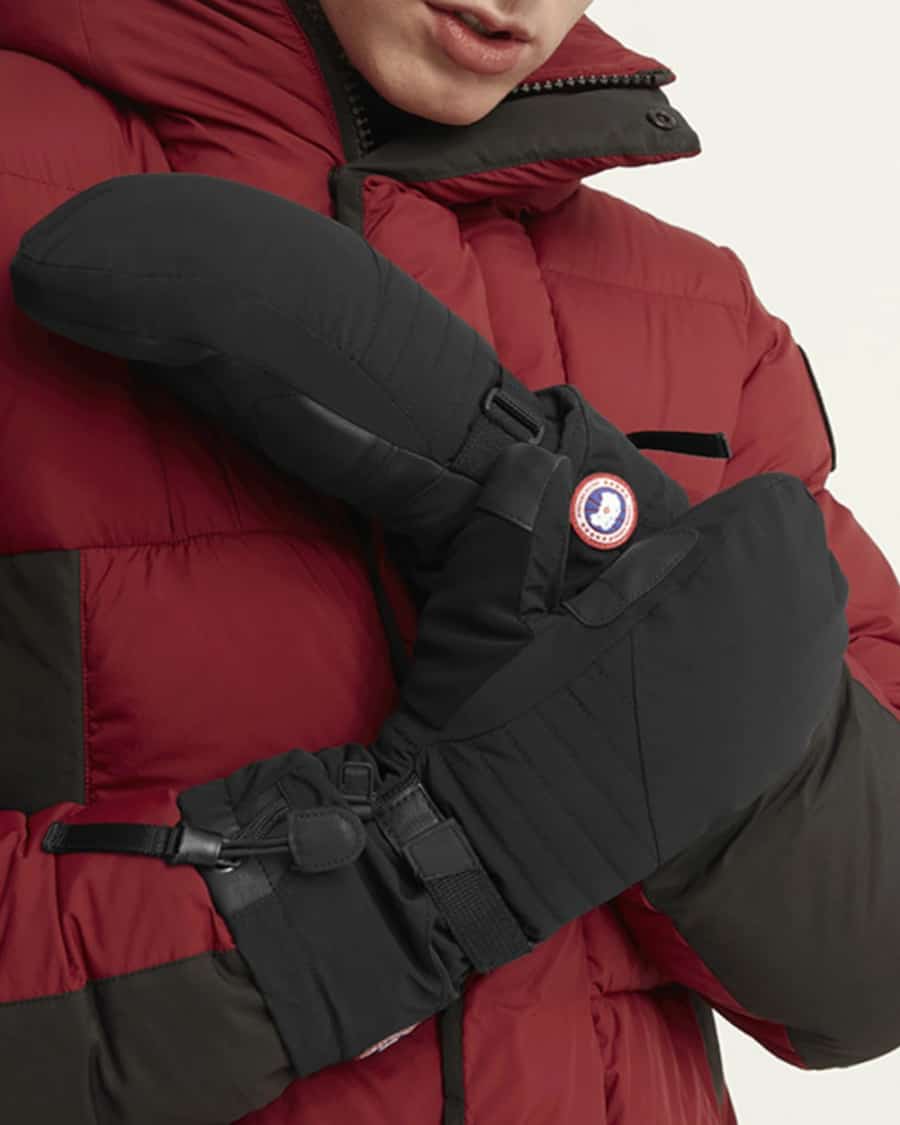 In the coldest of temperatures, you’ll be wanting technical mitts, because mitts have a reduced surface area compared to normal gloves and thus retain more heat. What you give away in digit dexterity, you make up for in glorious warmth.

What to consider when buying gloves 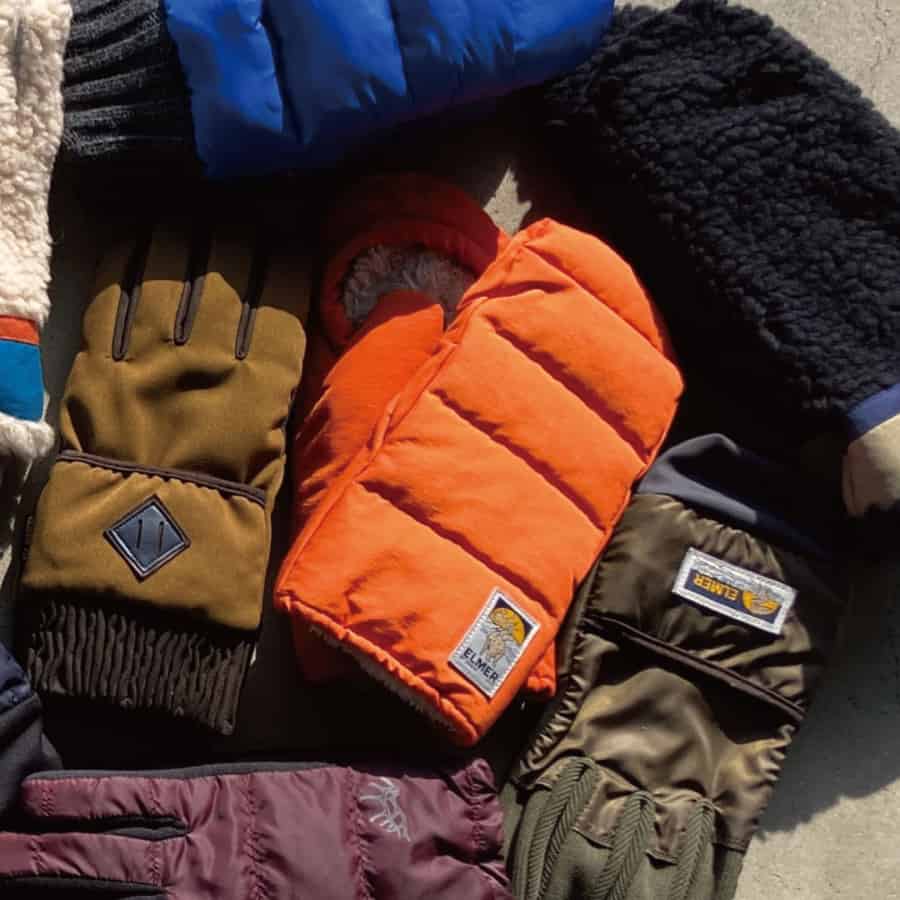 The textiles used in gloves will essentially determine how and when you wear them so you need to choose wisely. Blowing the budget on a pair of Peccary leather gloves is probably not a great idea if you predominantly wear off-duty clothes and need to wear gloves every day in winter. You’d be better off choosing a technical glove that’s much more hardwearing and insulated.

The outer shell fabric is the critical factor with technical gloves. Many brands utilise waterproof fabrics such as Gore-Tex, or their own proprietary water-repellent textile as the first layer of defence.

Leather gloves can put up with light showers but that’s about it. And as for shearling styles, we wouldn’t recommend using them as a wet-weather option. 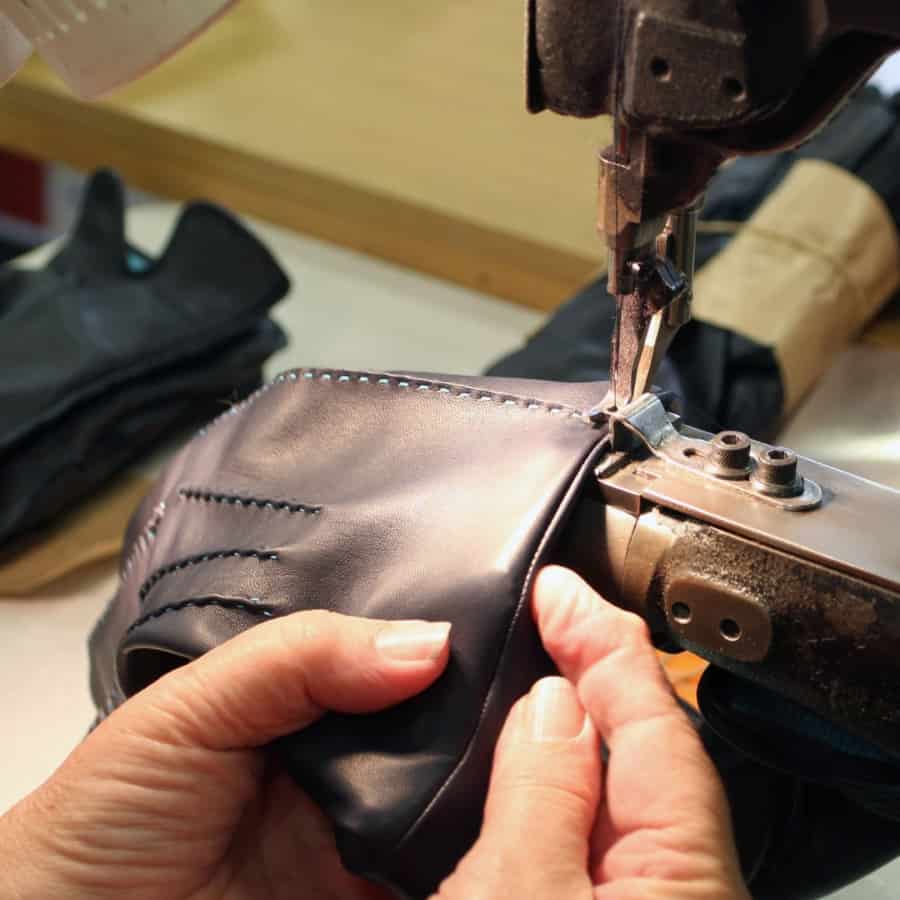 Fleece is the most popular lining in technical gloves since it is made from a dense polyester pile that is extremely warm, breathable and not at all bulky. You can even buy fleece liner gloves to wear inside your usual gloves, but they would be more for extreme backcountry skiers than they would be for your average winter commuter.

Shearling is a natural fibre alternative. However, although shearling is extremely warm, it also makes gloves bulky and therefore better suited to wearing with your weekend fits.

Leather gloves can have a range of linings, from thin polyester at the cheaper end to soft cashmere at the top end, with wool somewhere in the middle. 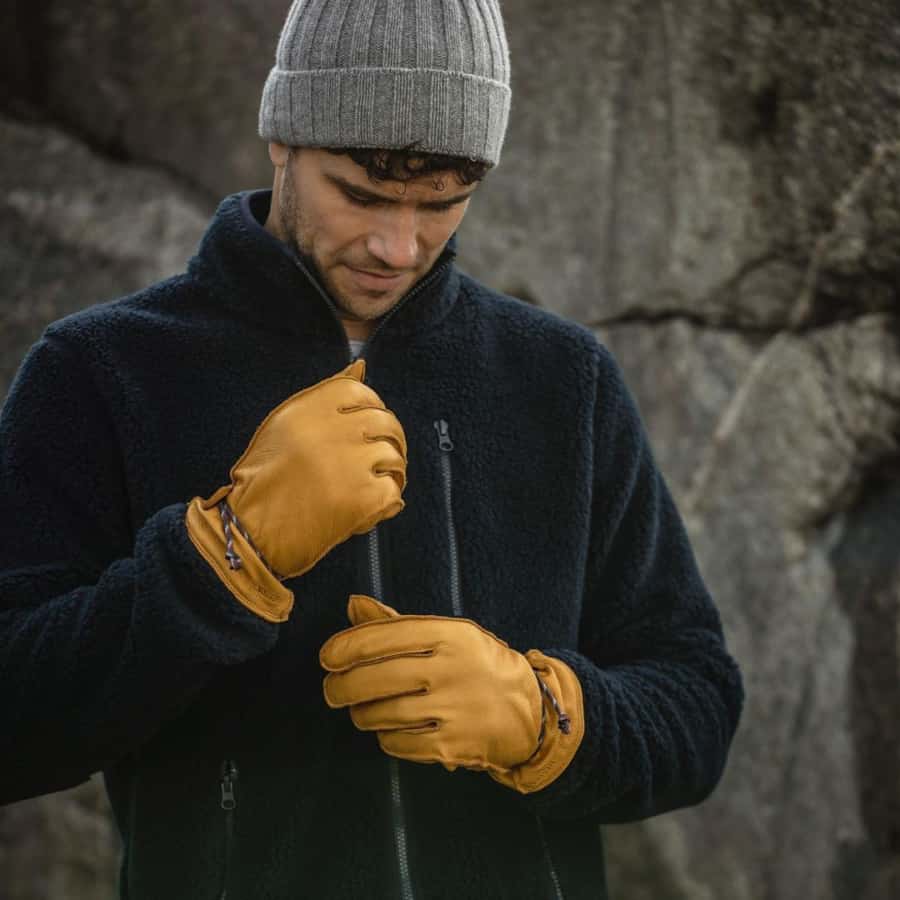 Most technical glove insulation these days consists of layers of tiny polyester micro-fibres. The best known is probably 3M’s Thinsulate, but a lot of the other outdoor brands have created their own proprietary linings, such as The North Face’s Heatseeker™.

The beauty of these linings is the warmth to weight ratio, enabling gloves to be incredibly toasty without adding huge amounts of bulk. 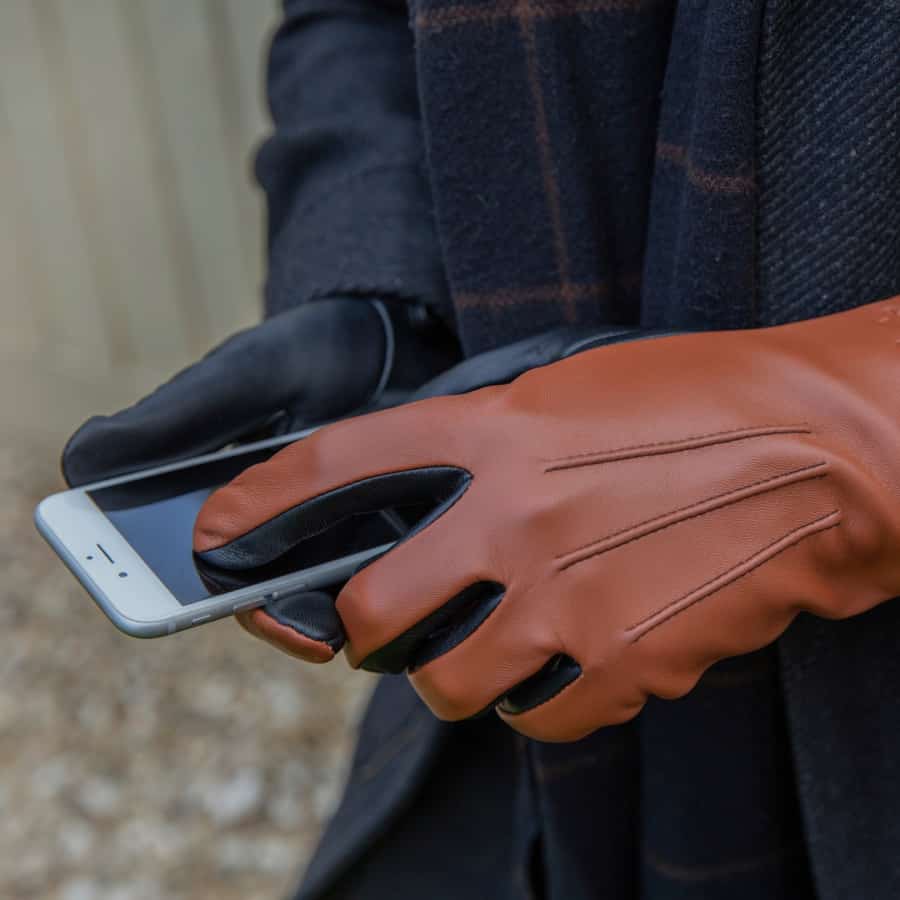 Given that we’re all glued to our smartphones, especially when commuting, the vast majority of urban gloves now feature some form of touchscreen functionality in the thumb and forefinger tips, as well as silicone grip details to make clutching your device that much safer.

These days you will also find leather gloves which have been given the tech treatment in the form of screen-sensitive fingertip functionality.

The best men’s gloves brands for 2023

Founded in 1936 by Martin Magnusson and now run by the third and fourth generations of the family, Hestra has garnered global acclaim for its superior winter gloves.

Designed and developed in the Swedish town of Hestra, the company produces about 400 different styles of gloves, each tweaked for specific purposes. From Primaloft-lined urban styles to goatskin leather gloves designed for chopping wood to beautiful lambskin suede dress gloves, Hestra’s attention to detail is second to none.

Since 1893, when Elmer Little emigrated to the appropriately named Gloversville in the Mohawk Valley region of Upstate New York, his eponymous atelier has been making some of America’s finest gloves. It’s not surprising when you consider that the region was already well known for its indigenous American deer skin industry.

Elmer’s high-performance gloves combine the best synthetic fibre technology with a heritage aesthetic, producing a wide and varied range of touchscreen-sensitive gloves and mittens in an array of colourways.

Unarguably the OG of leather glove, having been founded in 1777, Dents sets the bar for what handmade leather gloves should look and feel like. Still produced in the UK by a small number of skilled artisans, a Dents glove is a thing of beauty.

Although best known for its cashmere-lined leather styles, the brand also craft excellent wool, cotton, tweed, suede, sheepskin and lambskin designs, as well as an expansive range of driving gloves.

If your wardrobe leans towards a sartorial aesthetic and you want the very best quality without the luxury house price tag, Dents is most definitely for you.

Headquartered in North Vancouver, Canadian outdoor specialist Arc’teryx has passed through many different owners since it was founded in 1989, but thankfully none of them have diluted the core goal of producing high-performance outerwear.

Its Veilance arm has been a driving force in the streetwear scene since it was introduced in 2009, while its LEAF division supplies law enforcement and the armed forces.

Where gloves are concerned, Arc’teryx’s collections are predictably packed full of gloves for severe weather conditions, such as the Fission model, but it has also made a lightweight merino glove with touchscreen compatibility for the urban commuter.

The Canadian brand – best known for its down-filled jackets designed to withstand the most extreme temperatures – has been doing its thing since 1957 and shows no sign of abating.

Naturally then, its glove collection is the equal to its luxury outerwear, especially the down-filled styles that provide serious warmth with a waterproof shell.

For less extreme conditions, its Mixed Media glove is perfect for commuters, featuring a leather and Softshell fabric with touchscreen compatible fingers and a soft and comfortable liner.

With Dunhill’s long and storied motoring heritage, it only follows that the British heritage brand would produce luxury driving gloves among other beautifully crafted styles.

Its winter collection features a number of stunning leather varieties handmade from Italian lambskin, in some cases featuring a cashmere lining. They’re ideal for those with a sartorial bent and given how leather gloves of this quality age, the initial outlay is a worthy investment.

The North Face has been a pioneer of the modern outerwear movement, bringing high-performance technical clothing out from the cold and onto the streets with slick minimalist designs.

Using its proprietary Heatseeker lining technology, most of The North Face’s gloves are built to withstand extreme environments. Yet the iconic brand has also created an eclectic and diverse range for the modern consumer, epitomised by its Etip gloves which have touchscreen compatibility and are made from recycled fleece.

Still under family ownership, Carhartt has been producing rugged workwear ever since 1889, but it wasn’t until a century later that it launched Carhartt WIP (Work in Progress) – a division of the company that was consumer-focused.

It’s there that you’ll find hardwearing gloves designed for the modern man, such as its waterproof polyester Derek gloves with touchscreen fingers, or its organic cotton Dearborn canvas Duty gloves.

These are simple, durable, time-honoured designs reworked for a contemporary audience.

A new kid on the block, but always making waves, Seymoure was founded in 2020 with a vibrant collection of leather gloves which have more of a fashion appeal than the traditional makers.

From its classic Grant gloves and fingerless styles to more avant-garde fringed designs, Seymoure’s gloves are designed to make a bold statement for fearless dressers.

Expect the very best from a heritage leather specialist like Hermès. The luxury French fashion house, renowned for its incredible artisanal quality and fabric use, produces some of the best leather glove styles money can buy. Yes, you’ll pay a premium for the Hermès label, but we can’t think of any other gloves that will actually retain their value over time.

The ‘H-stamp’ gloves are the poster boys, constructed from cashmere-lined glossed lambskin, while the Clou du Selle II design comes in a more textural deerskin, but there are plenty other styles to get your mitts on, too.

Dalgado is a German design studio founded by René & Jan Jülicher that specialises in leather gloves and belts. Made in both Germany and Italy, Dalgado runs a direct-to-consumer model which is why its prices beat every other leather glove maker on this list.

As for the quality? Pretty outstanding. They’re split into three leather categories: Peccary leather (the creme de le creme), followed by Caprincho and deerskin. All of them are lined in cashmere.

The Peccary style is priced at €245, which is an absolute no-brainer. 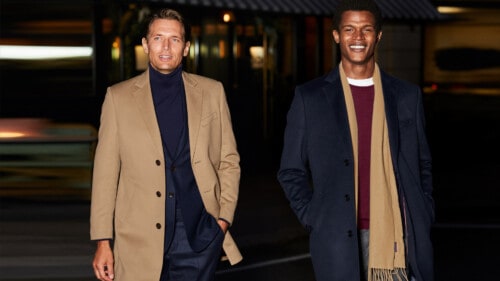 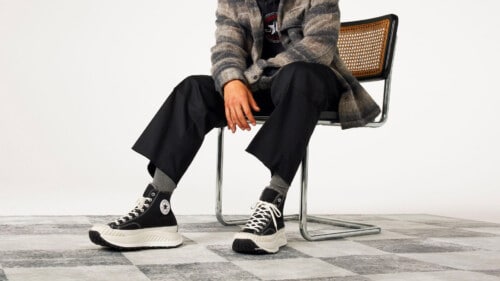 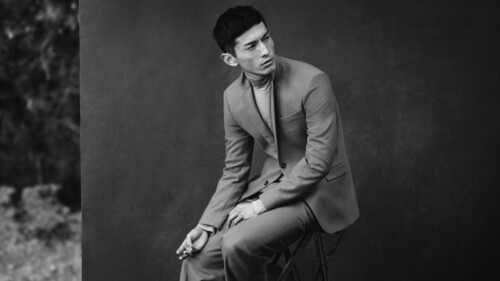 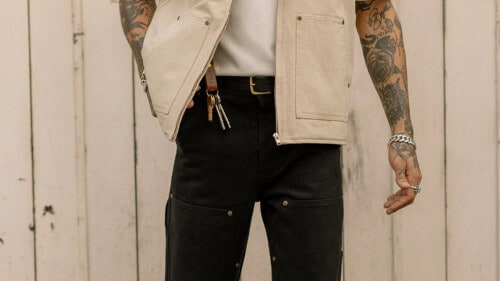