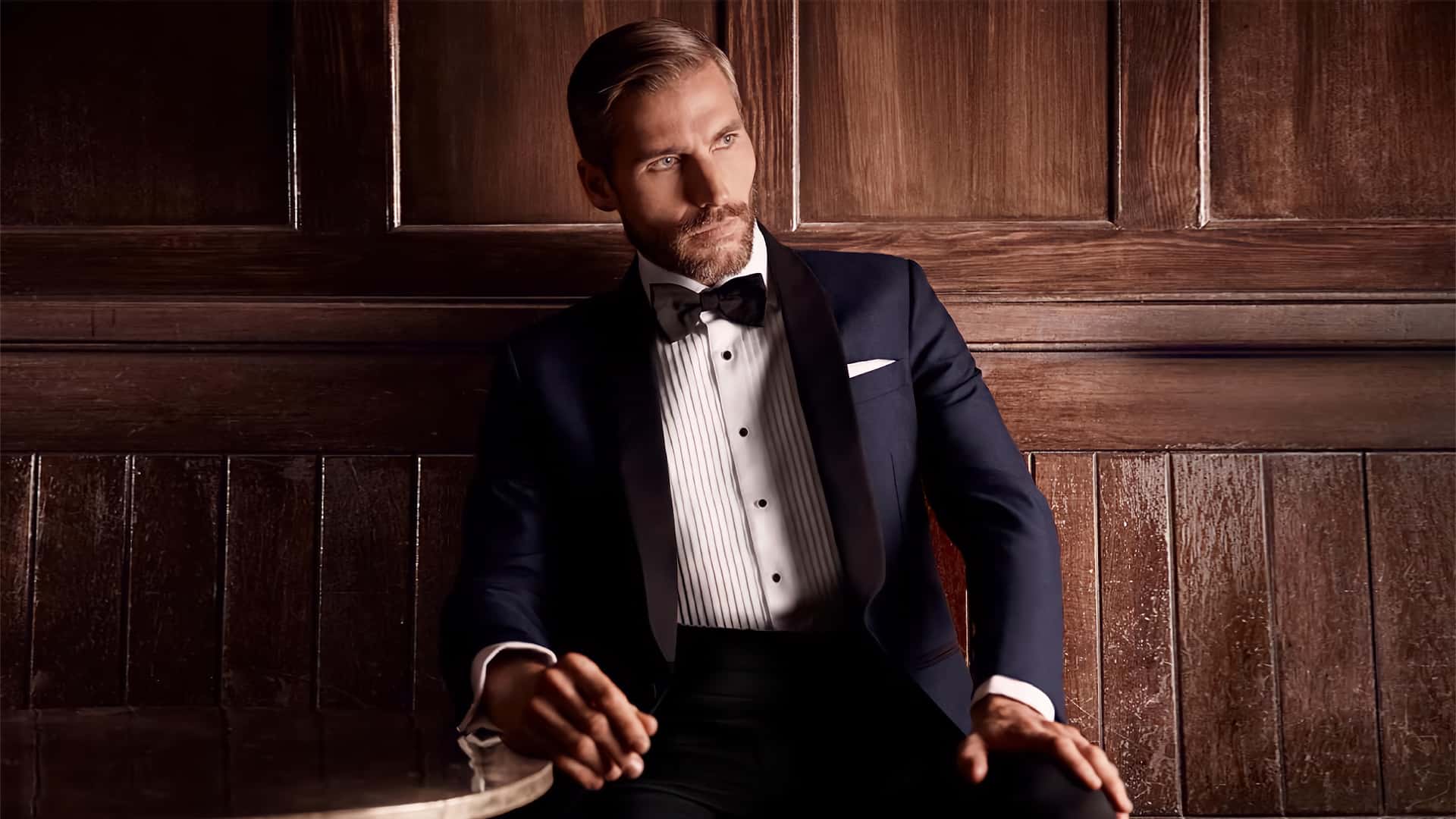 The Black Tie Dress Code: A Modern Man’s Guide For 2022

At some point in his life, a man is going to be called upon to wear black tie, the formal eveningwear ensemble. We’ll show you the sartorial ropes of this age-old getup plus how to bend some of the rules in order to stand out.

Today, the dinner jacket is the king of menswear garments, de rigeur at most formal evening events. In its classic black and silk grosgrain lapel form, it offers the most elegant of silhouettes. It has neither bells or whistles – just beautiful sharp lines to flatter the torso and give the impression of grandeur.

Too many people seem to get caught up in the ‘rules’, when in reality black tie is both very simple and very versatile in 2022, with a surprising amount of wiggle room to do your own thing. Below, we’ll go into exactly what constitutes classic black tie, as well as looking at some modern alternatives.

The history of black tie

The history of black tie is wound up in a bit of transatlantic confusion, namely the differences between a dinner jacket and a tuxedo. On the British side of the pond, we wear a dinner jacket, whereas on the US side they wear a tuxedo.

What’s the difference? Precisely nothing. It’s a nominal quirk that has stuck since the genesis of the garment. That goes back to around 1865, when the Savile Row tailor Henry Poole & Co was tasked by Edward VII to make him a formal jacket he could dine in because he was nonplussed at having to sit in tails all the time. That request spawned what we know today as the dinner jacket, or DJ.

The creation was spotted by another Poole customer, one James Potter of Tuxedo Park, New York. One or two other Poole customers, having seen Potter’s jacket, also had some made and before you knew it they were known as the ‘Tuxedo Boys’. So while the British invented it, the Americans did a great job in proliferating it, especially during the 40s and 50s when the likes of the Rat Pack popularised smart, sophisticated and elegant eveningwear. 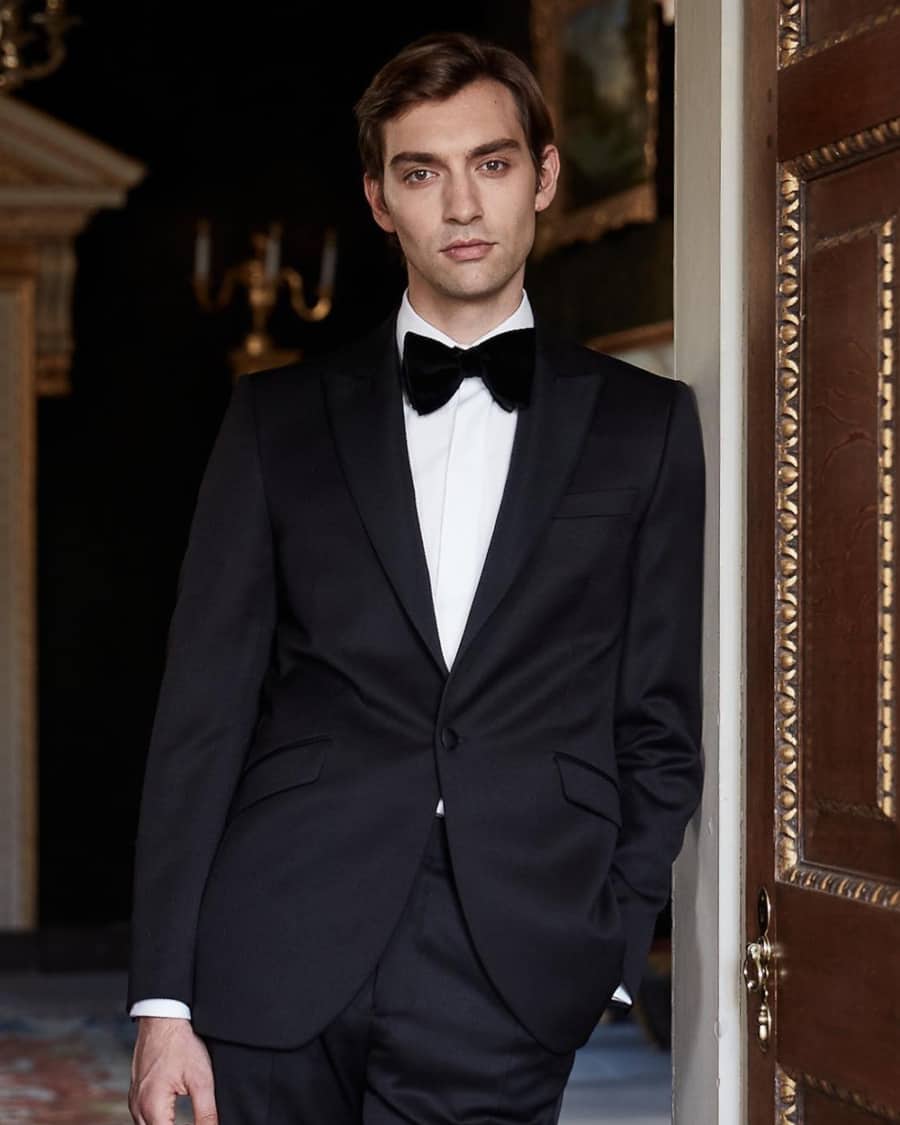 The dinner jacket, AKA tuxedo jacket, is typically a black or midnight navy (the latter was the original choice since it actually looks blacker than black under artificial light) single-breasted, peak-lapel jacket, often with silk grosgrain lapels and a one-button front closure (two ruins the minimalist lines of the DJ).

Double-breasted styles do exist but they’re hard to find and are better suited to some of the more contemporary alternatives, which we’ll get onto later.

So far, so simple. 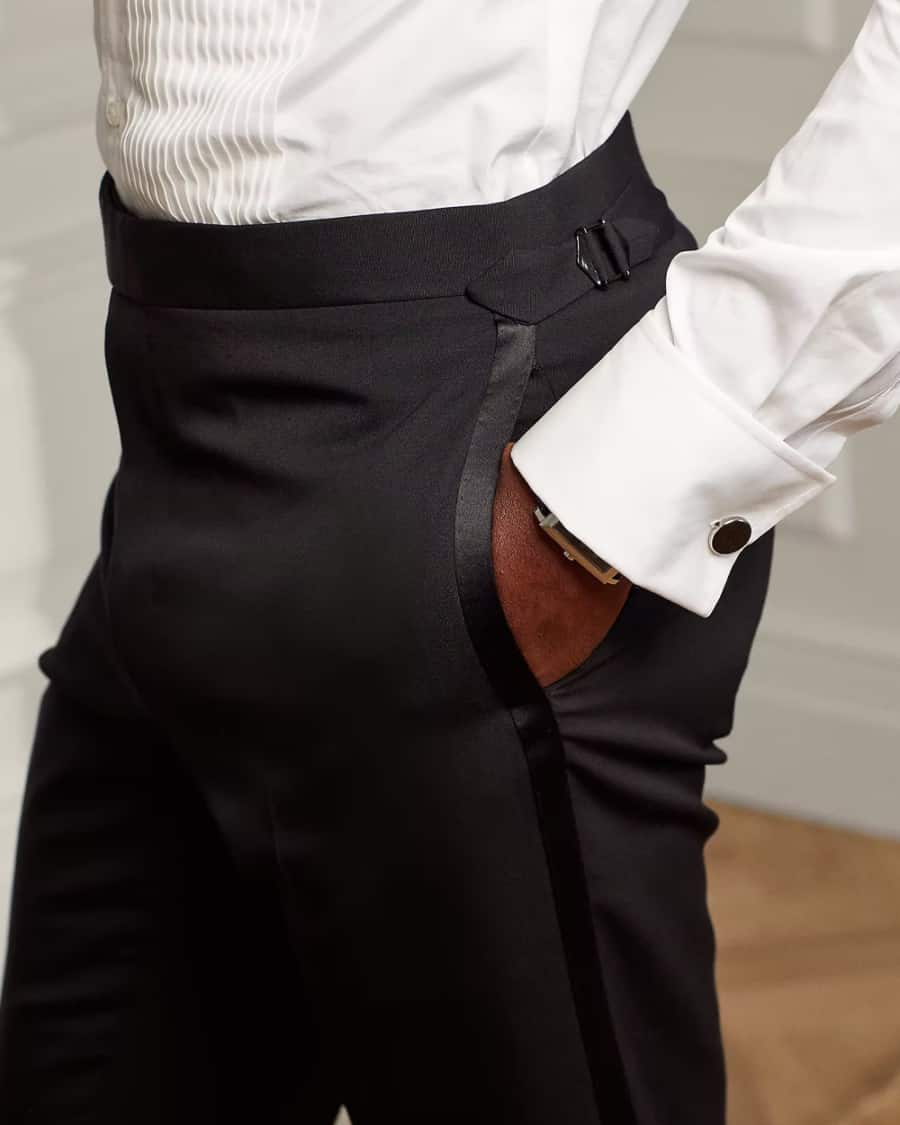 Besides the dinner jacket, the other requisite is matching dress trousers. These should feature a single row of silk braid (or a satin trim) down each outside leg, and be naturally tapered. 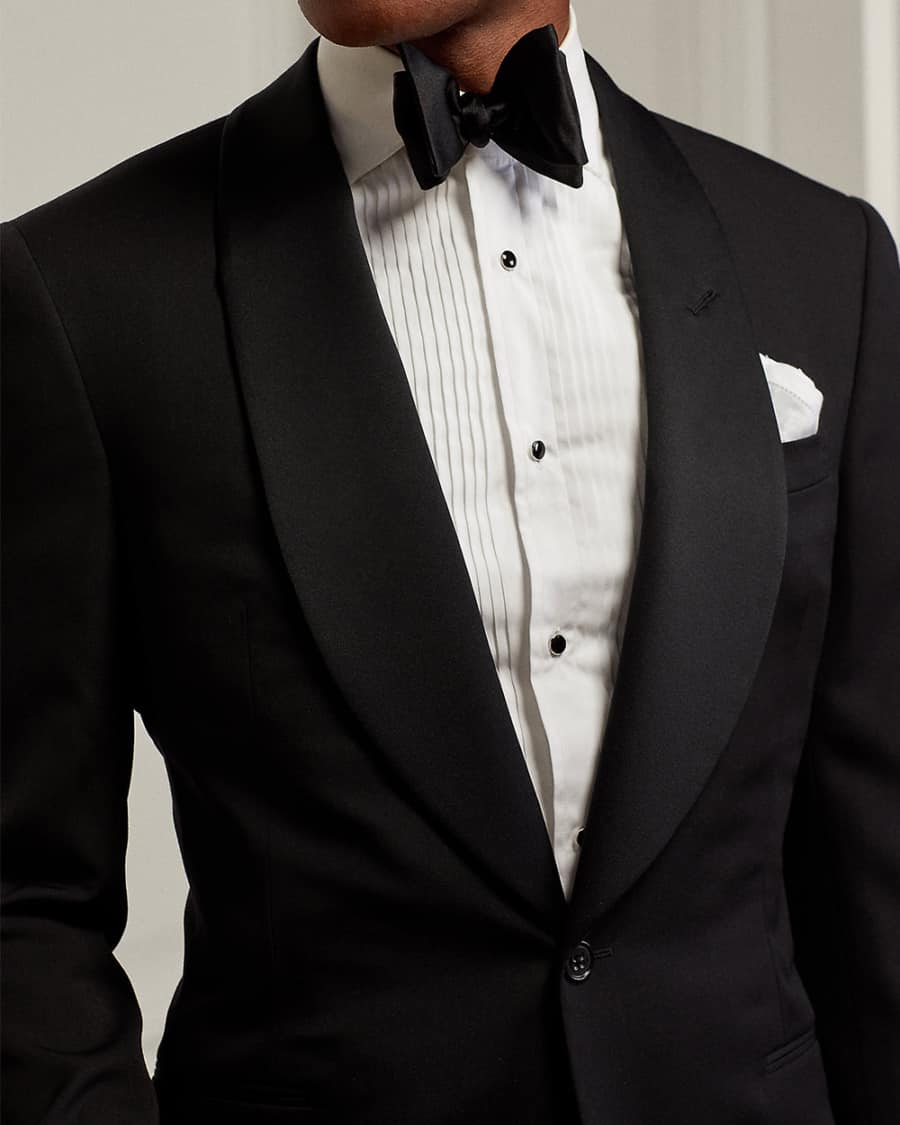 The shirt should be a classic white evening shirt with a marcella collar, bib and double cuffs (meaning you will need studs or cufflinks to secure).

If you prefer to wear shirt studs, they should be black or decorative, such as Mother of Pearl. 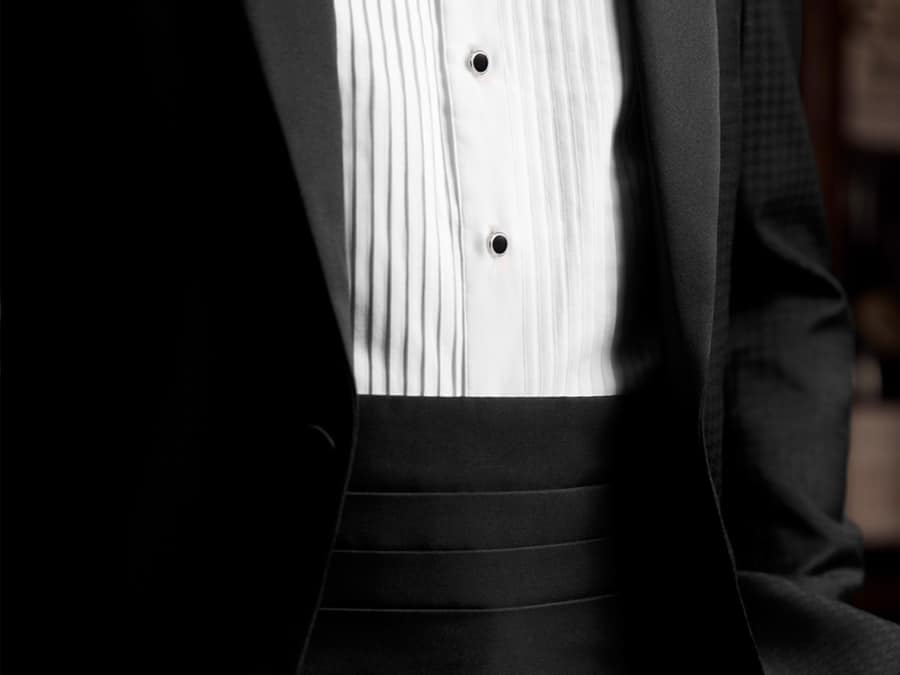 The question of whether to wear a waistcoat is often asked, and we would answer that while not ‘against the rules’, a waistcoat can make black tie look overly busy, which is not what you want. It is a simple, elegant look that relies on its svelte silhouette and lack of embellishment for impact. The addition of a waistcoat only complicates matters.

Cummerbunds were once popular for adding a swathe of colour to black tie but, in our humble opinion, look a little outdated in the current age. 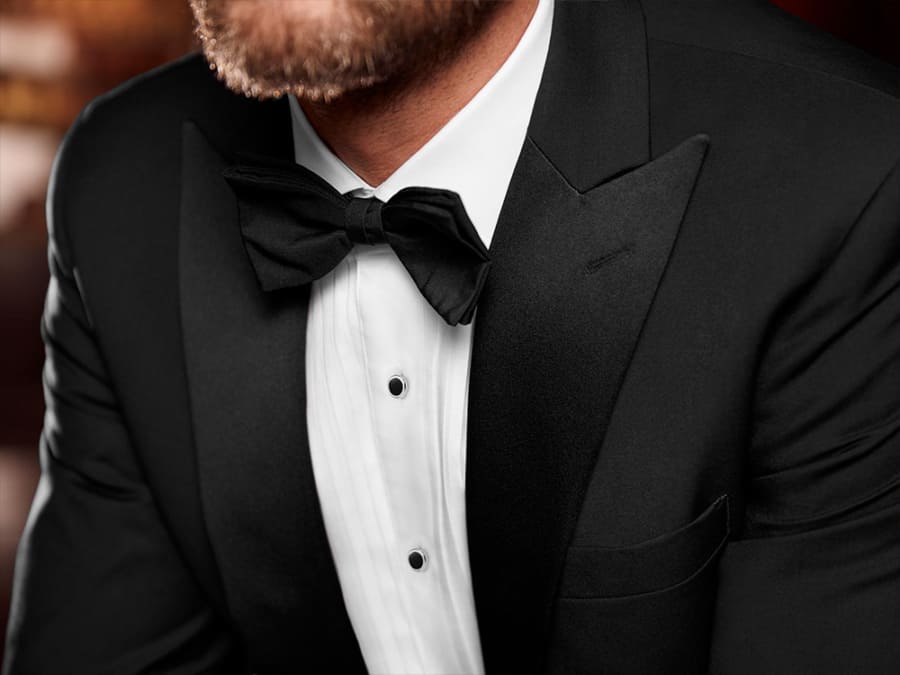 A black, hand-tied bow tie (the size of which should be proportionate to the wearer) is the natural accompaniment for almost all formal occasions, but where you might see or interpret ‘Hollywood Black Tie’, then a simple black neck tie can be substituted.

Given hardly anyone seems to be able to tie a bow tie today (and no you shouldn’t use the cheat version!), the Hollywood look has certainly become more popular. 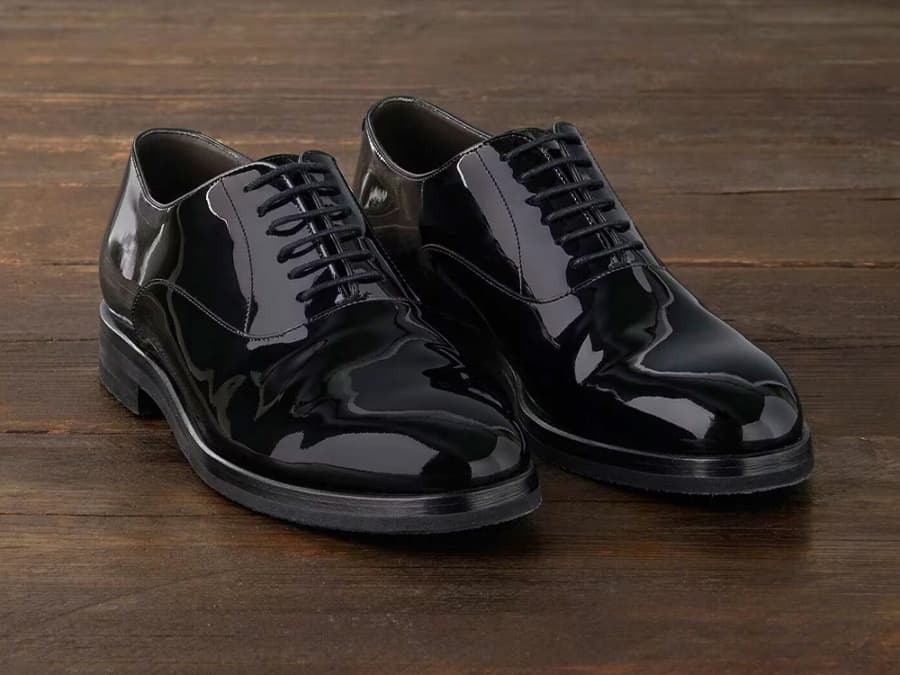 Unless your calendar is packed full of weddings, galas and other formal events, we’d recommend swerving patent versions if you want to get more wear out of them. 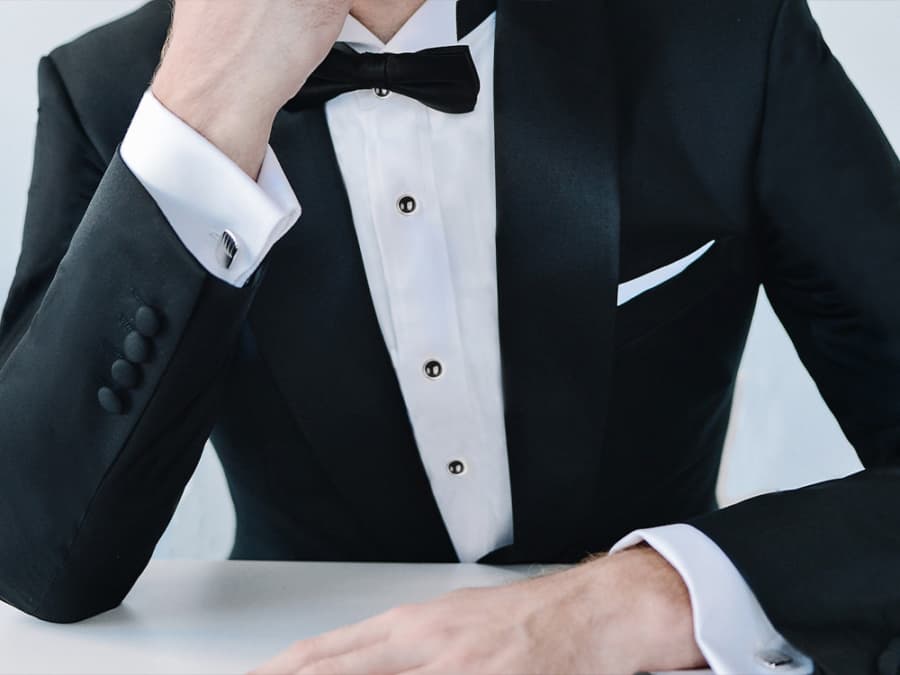 In your breast pocket should be a white handkerchief, either crisply folded, or nonchalantly stuffed depending on your mood. You can deviate from the norm with, say, a polka dot style, but keep it restrained. You don’t want to undo your entire look with the peep of a gaudy pocket square.

The only other essential are cufflinks, which should be similarly understated. Classic silver and black onyx designs are foolproof, but we’re particular fans of Turnbull & Asser’s reversible onyx and mother-of-pearl studs, which can be used to complement your choice of shirt studs.

If you decide to wear a watch, ensure it is slim in proportion and minimalist in design, on a leather bracelet. Where possible, look to match the metal to your cufflinks.

As mentioned before, the options for black tie do not stop at the traditional black or midnight navy dinner suit. See Daniel Craig at the premier of No Time To Die wearing a double-breasted fuschia pink velvet dinner jacket by Anderson & Sheppard to understand how widely the dress code can be interpreted.

From double- and single-breasted velvet styles to ivory tones and bold micro-wale corduroy jackets, contemporary iterations of black tie have become a lot more creative in recent years, proving that there is no ‘wrong’ black tie, provided you can carry it off with confidence and panache. 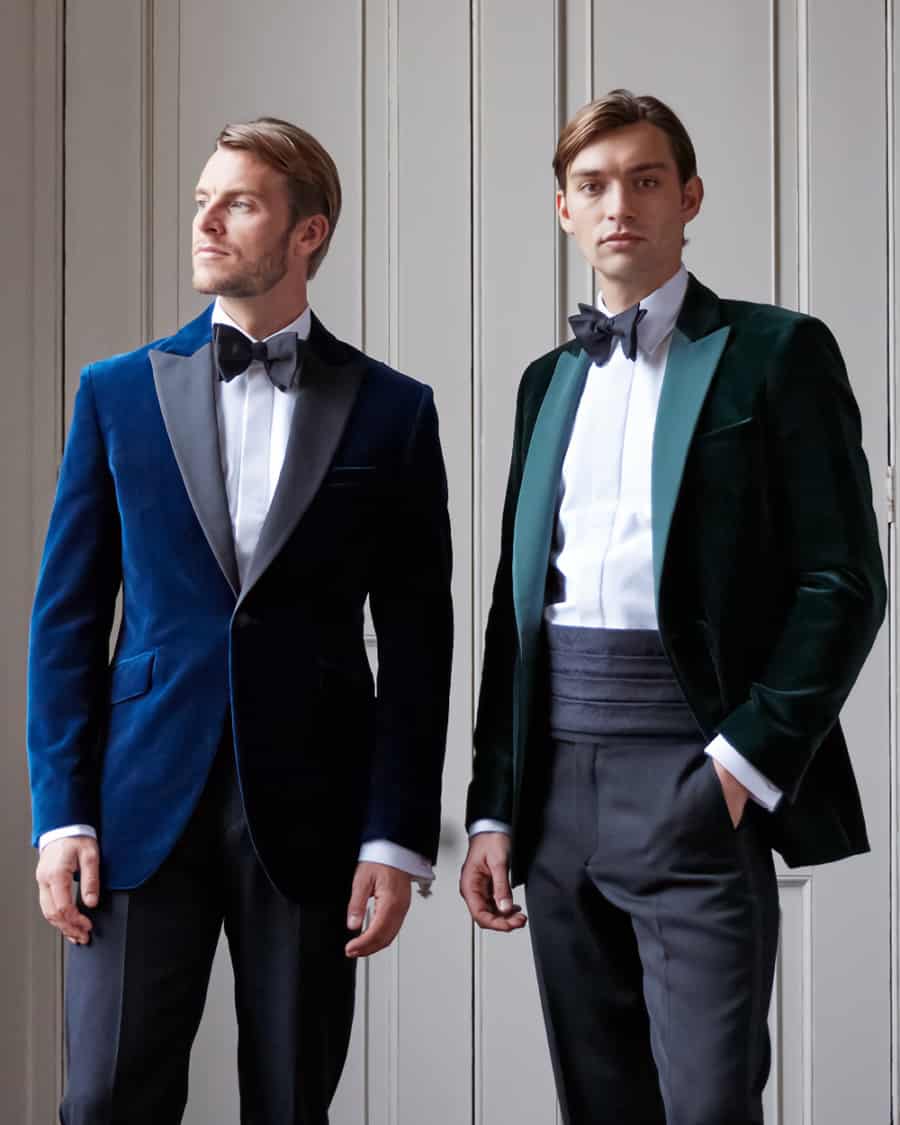 The origins of the velvet jacket go back to around the 1850s when smoking jackets became popular with British gentlemen. As the story goes, the influx of cheap Turkish tobacco on the back of the Crimean War led to a proliferation of fashionable smoking, the downside of which was the smell that would impregnate one’s best clothes and be almost impossible to get out. Hence the smoking jacket was invented to wear over one’s smart attire.

It was constructed from cotton or silk velvet because it was thought that the short plush pile would absorb more of the smoke. The velvet eventually shifted across to the dinner jacket silhouette and has been a very popular alternative for black tie ever since.

Today, you’re most likely to find single-breasted versions in tones such as navy, black, burgundy, mustard and racing green (most of which the excellent Favourbrook specialise in). They tend to feature black silk peak lapels but can also be found with shawl lapels too.

With texture, tactility and colour, they are an eye-catching and confident swap for the classic black dinner jacket. 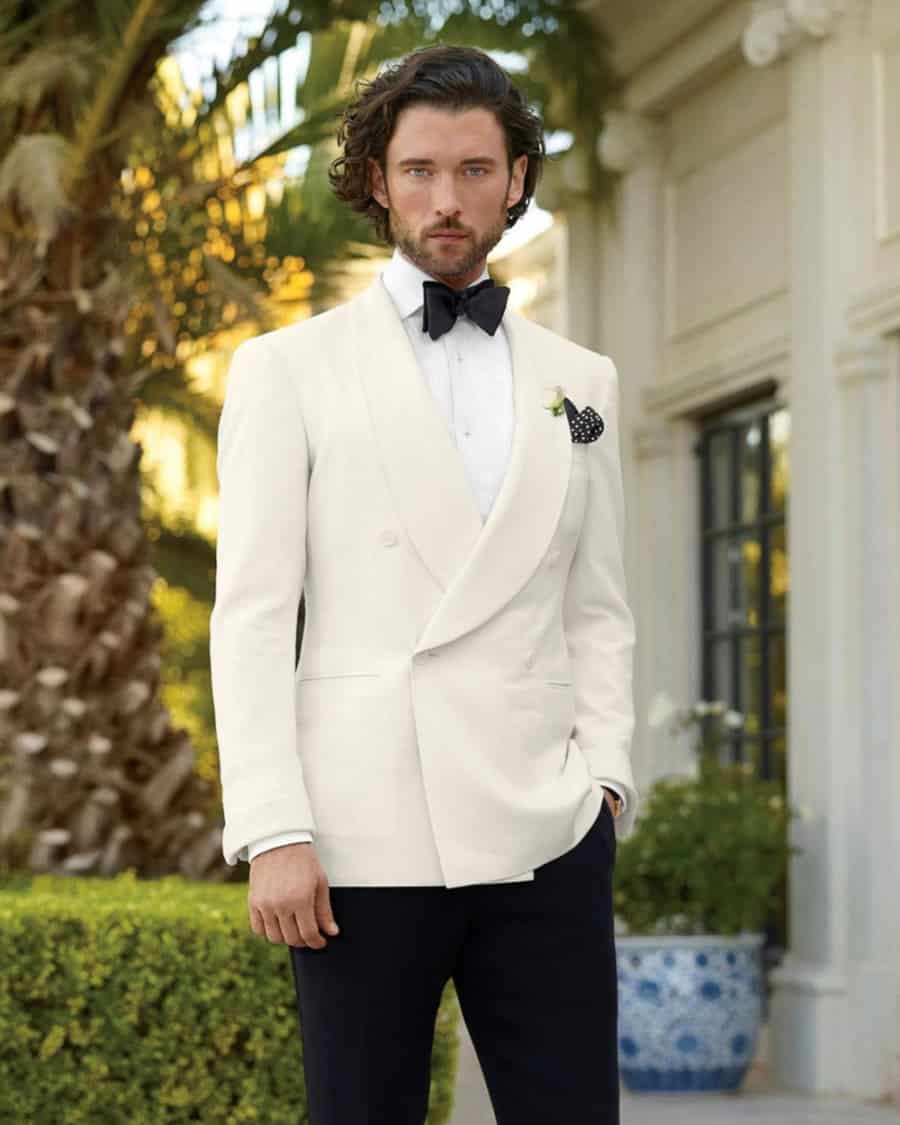 Typically reserved for tropical conditions, the ivory tuxedo jacket is a classic, exemplified by Humphrey Bogart’s iconic look in the film Casablanca (1942). Bogart wears a double-breasted style with sweeping shawl lapels that has become the thing of legend.

Another great version to take inspiration from is Bond’s ivory, peak-lapel, single-breasted dinner jacket he wears in Morocco in Spectre (2015). Ivory styles are often constructed from a tropical wool blend with either silk or linen to ensure they are lightweight and will keep you cool, hence why they can be quite pricey.

One important point to note is that ivory dinner jackets don’t require silk facings, unlike their midnight and black counterparts. They are quite formal enough, and the addition of silk grosgrain lapels can make them appear somewhat tacky. 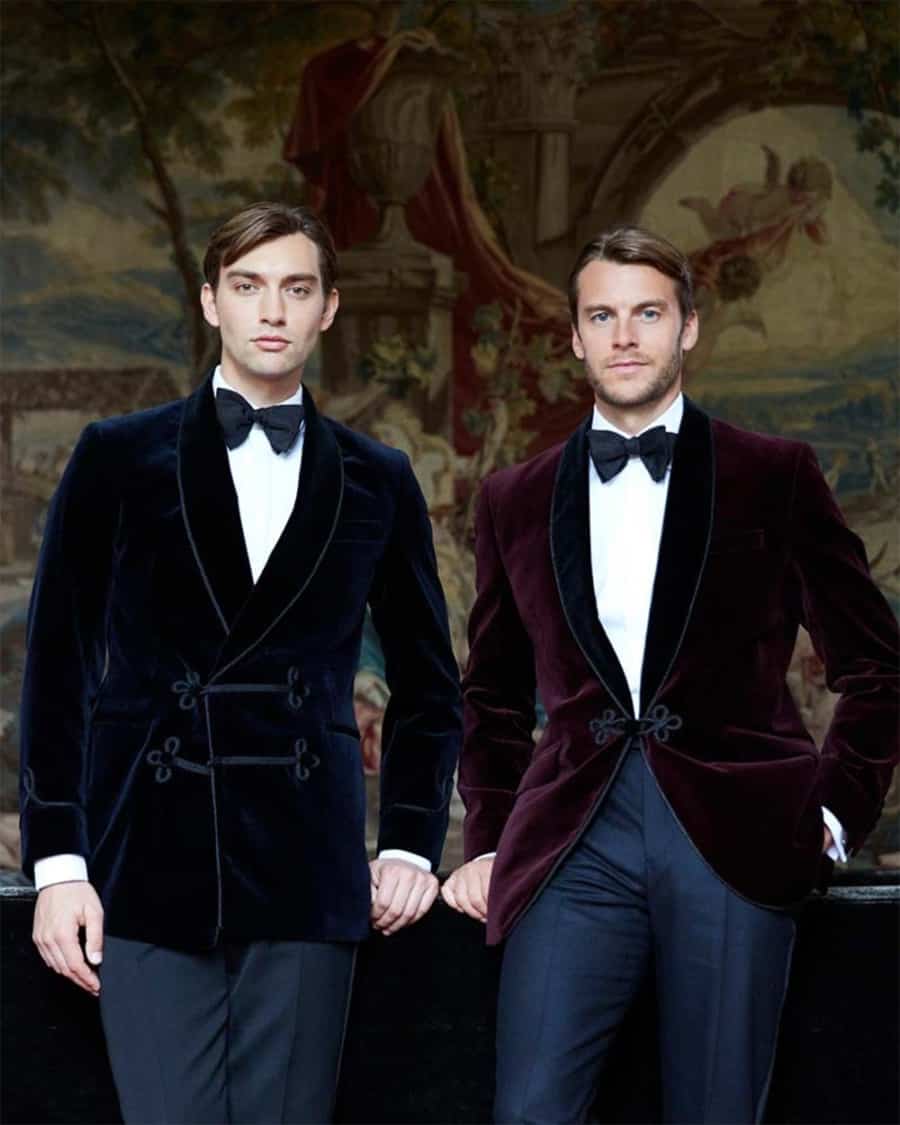 The smoking jacket is derived from the 17th century robe de chambre, which was an ostentatious robe of the upper classes wore to keep warm while getting dressed. Ostentatious because it was typically made from lavish fabrics and embellished with ornate embroidery, all designed to display one’s wealth. In fact, it was often the choice to wear if one was having their portrait painted.

As mentioned above, the vogue for tobacco in the 1850s saw a shift towards a velvet style in order to absorb the smoke. The smoking jacket’s heyday was between the 1920s and 50s, when the likes of Noel Coward, Fred Astaire, then later Cary Grant and Dean Martin were all great proponents of the style. Some would wear it casually as originally intended, while others wore it as an alternative to the dinner jacket.

Today, the smoking jacket is much closer to the dinner jacket silhouette, typically featuring frogging closures and quilted silk shawl lapels. It is cut slightly longer than the dinner jacket and with a boxier shape that looks particularly good on larger gentlemen.

The traditional colours of burgundy, navy, black and racing green are all excellent options. 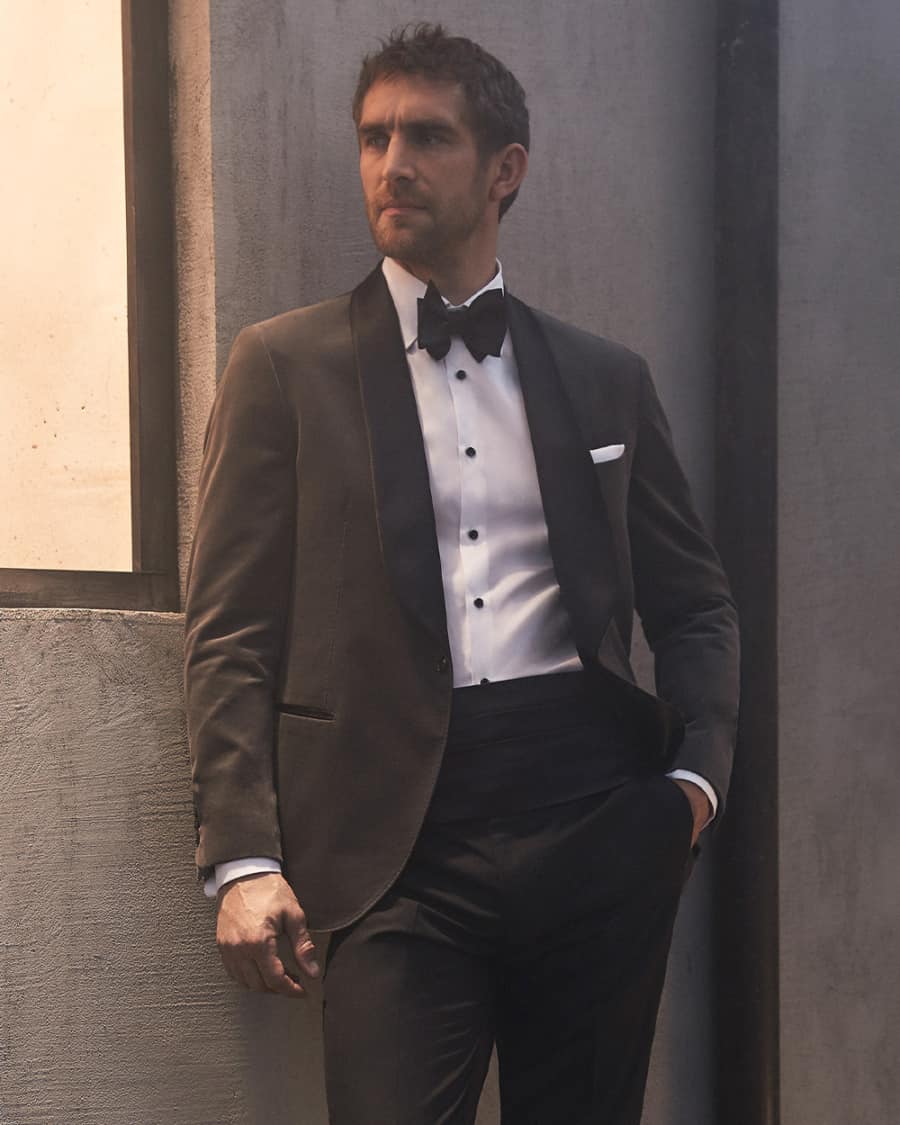 Corduroy jackets as dinner jackets are a relatively new phenomenon but can be very effective provided one sticks to a few rules. The first is that the wales of the corduroy should be fine, so that the cloth almost appears smooth to anyone observing from a few metres away. Secondly, you should choose a bold colour to clearly indicate you have made a purposeful choice and not simply picked up an everyday corduroy blazer.

Wear it with the other elements of classic black tie – e.g. silk stripe black dress trousers and a black bow tie – but you may want to reinforce your confident look by choosing a pleated dress shirt in a colour other than white, such as pale blue. 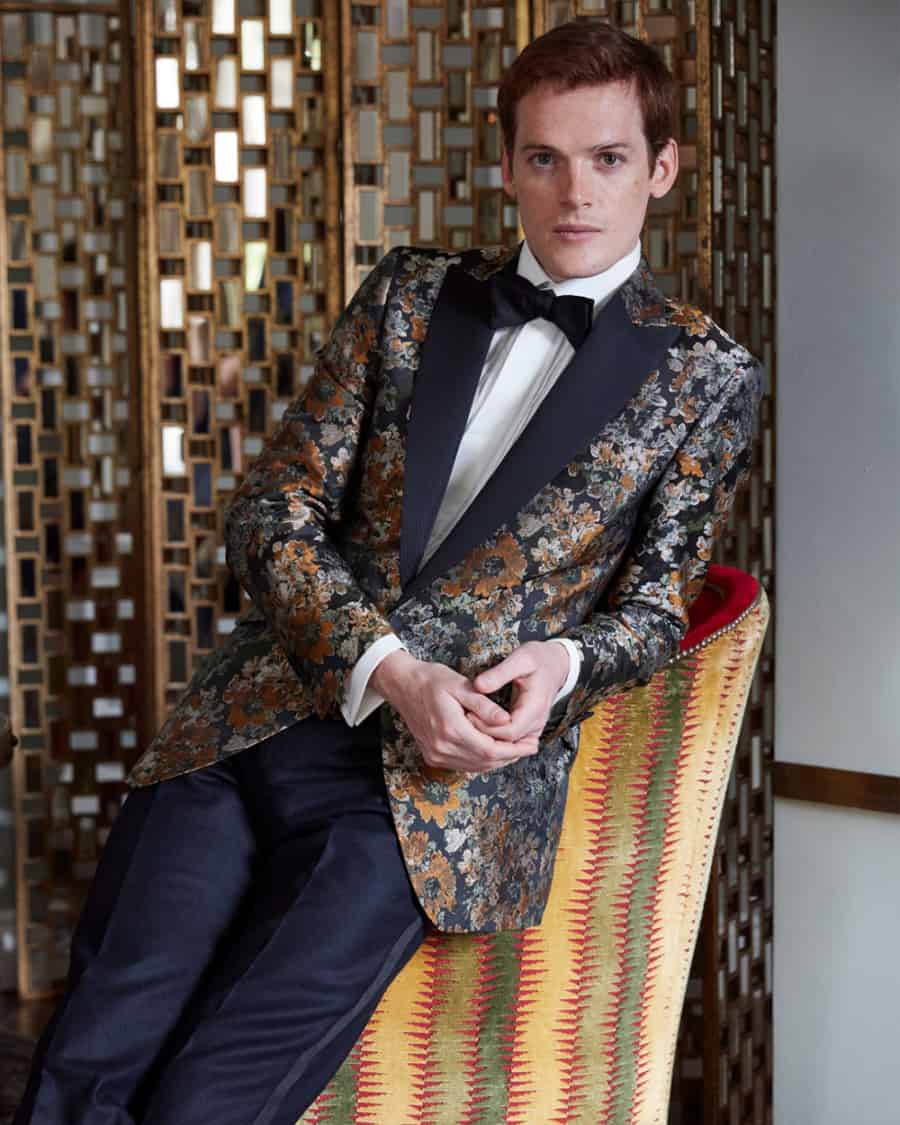 Dinner jackets constructed from silk – or at least a silk blend – are another great head-turning alternative, especially when embellished with intricate floral jacquard or embroidery.

These types of dinner jackets are meant to be glamorous and fun so choose your event wisely. Floral motifs or geometric patterns are popular options. 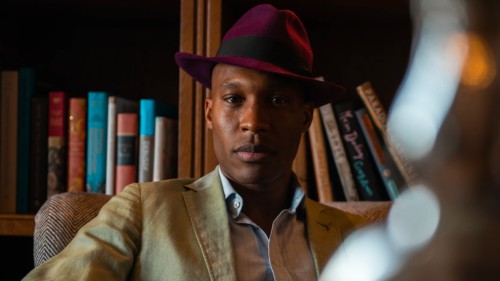 9 Types Of Hats For Men And Who They Suit Best 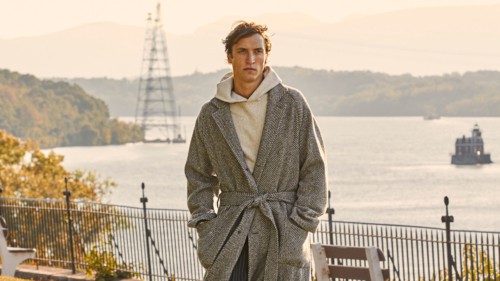 Men’s Hoodie Outfit Inspiration: 19 Looks For 2022 That Are Stylish Not Sloppy 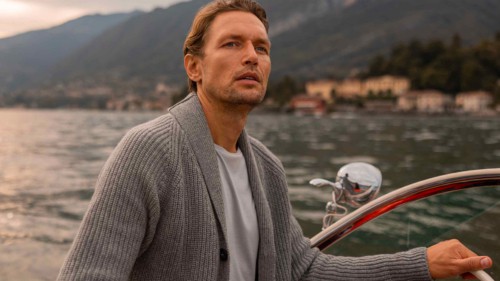 Men’s Cardigan Outfit Inspiration: 19 Getups That Won’t Make You Look Like Your Dad