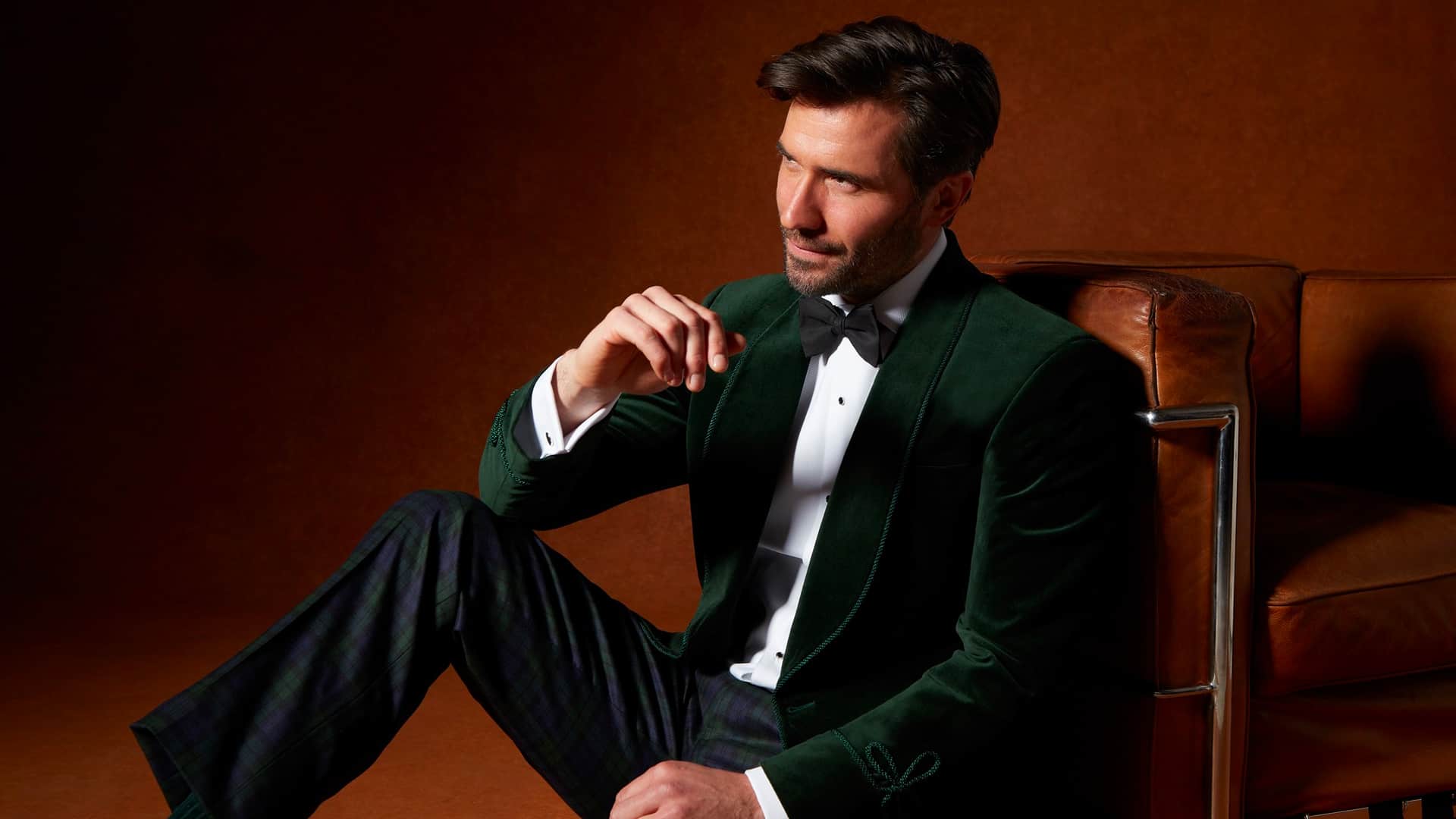 From functional gown to black tie alternative, the smoking jacket has served many purposes, and is now very much an integral part of a formalwear wardrobe.

The genesis of the smoking jacket was a utilitarian one, but this iconic piece of menswear has since climbed the sartorial ranks to become a much-loved piece of formalwear.

It has evolved from a functional frock coat to a lounge jacket for formal evenings, and has even become a black tie alternative. What’s more, plenty of folks still wear it in the surroundings it was originally purposed for: lounging around at home.

A while the smoking jacket no longer serves its original function – as a means to absorb cigarette smoke from one’s clothing beneath – it nevertheless reinvented itself as a key element of a man’s evening wardrobe.

The seminal American author Henry Miller put it best, when he wrote in the Tropic of Cancer: “It’s beautiful to have a smoking jacket, a good cigar and a wife who plays the piano. So relaxing. So lenitive. Between the acts you go out for a smoke and a breath of fresh air.”

The history of the smoking jacket

A good many pieces of modern menswear have interesting backstories, given that they mostly came to be through military necessity or innovation. Similarly, the history of the smoking jacket is remarkable, as is its longevity.

It is the widely held belief that the first incarnations of the smoking jacket came in the form of the French robe de chambre and most likely date back to the 1600s. Riding on the back of a booming silk trade, the European ruling classes were getting creative with the fabric, in part because showing it off was akin to announcing one’s social standing and wealth. Hence why the robe de chambre is seen being worn by the noble subjects of many portraits painted at the time.

It wasn’t until the mid-19th century that the robe began to take on more of a jacket silhouette. In 1850, Gentleman’s Magazine of London put out the earliest description of what a classic smoking jacket should look like, stating it was “a kind of short robe de chambre, of velvet, cashmere, plush, merino or printed flannel, lined with bright colours, ornamented with brandenbourgs, olives or large buttons.”

The smoking jacket took a while to generate fashionable momentum, but that all changed with the outbreak of the Crimean War. It was only then that the British people began to get a taste for Turkish tobacco, which flooded in at affordable prices. Smoking became a national pastime, but the smell was not to everyone’s taste. The smoking jacket offered the perfect combination of style and protection from falling ash and the smell of tobacco smoke. Also popular at the time were smoking caps, which would protect one’s hair from the tobacco smoke.

It wasn’t until 1865 that the smoking jacket shook off its reputation as a merely functional garment and became a stylish jacket, thanks in large part to Edward VII, the Prince of Wales. He wanted a smoking jacket smart enough that he needn’t take it off at meals so he commissioned Henry Poole & Co. of Savile Row to make him a blue silk version.

Since then, the smoking jacket has experienced all of the undulations on the rollercoaster of popularity, from its heights on the backs of Dean Martin and Fred Astaire (the latter of whom was buried in his favourite smoking jacket), to its lows of cheap Halloween versions aping the late Hugh Hefner. Although the smoking jacket maintained a comfortable seat in the wardrobes of the upper classes, it took Tom Ford in the 90s to bring it back into ‘fashion’. Today, it has been given new life as a bona-fide alternative to traditional black tie attire.

The different types of smoking jacket

There is only really one type of smoking jacket, but there are a number of different variations of details which can completely alter how and when you wear it. We’ll run through them all here: 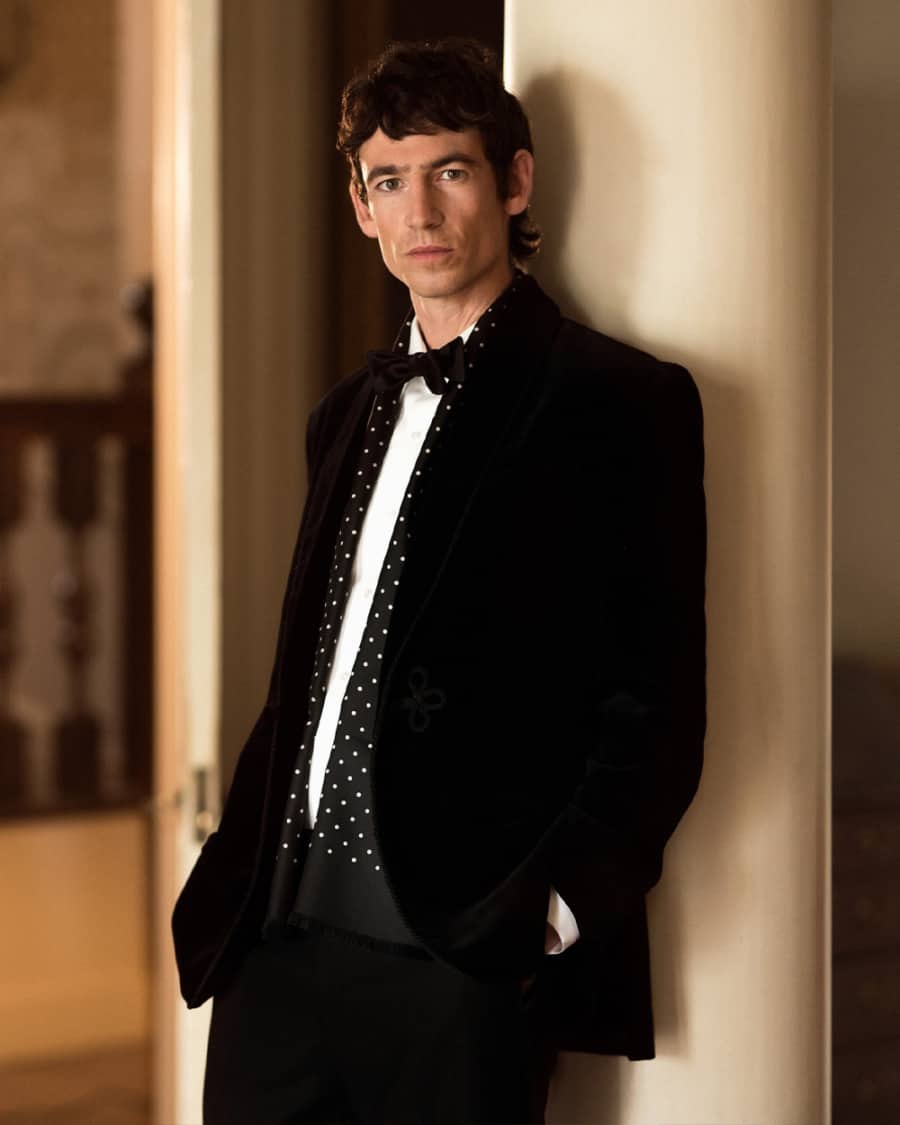 While traditional smoking jackets tend to finish at the mid-thigh, contemporary styles are much more akin to the silhouettes of dinner jackets simply because that is typically the dress code wherein you would wear one today.

A shorter jacket is more versatile and doesn’t risk looking antiquated. Saying that, if all you’re going to do is lounge around at home with your Cohibas and a single malt, then a traditional length is perfect. 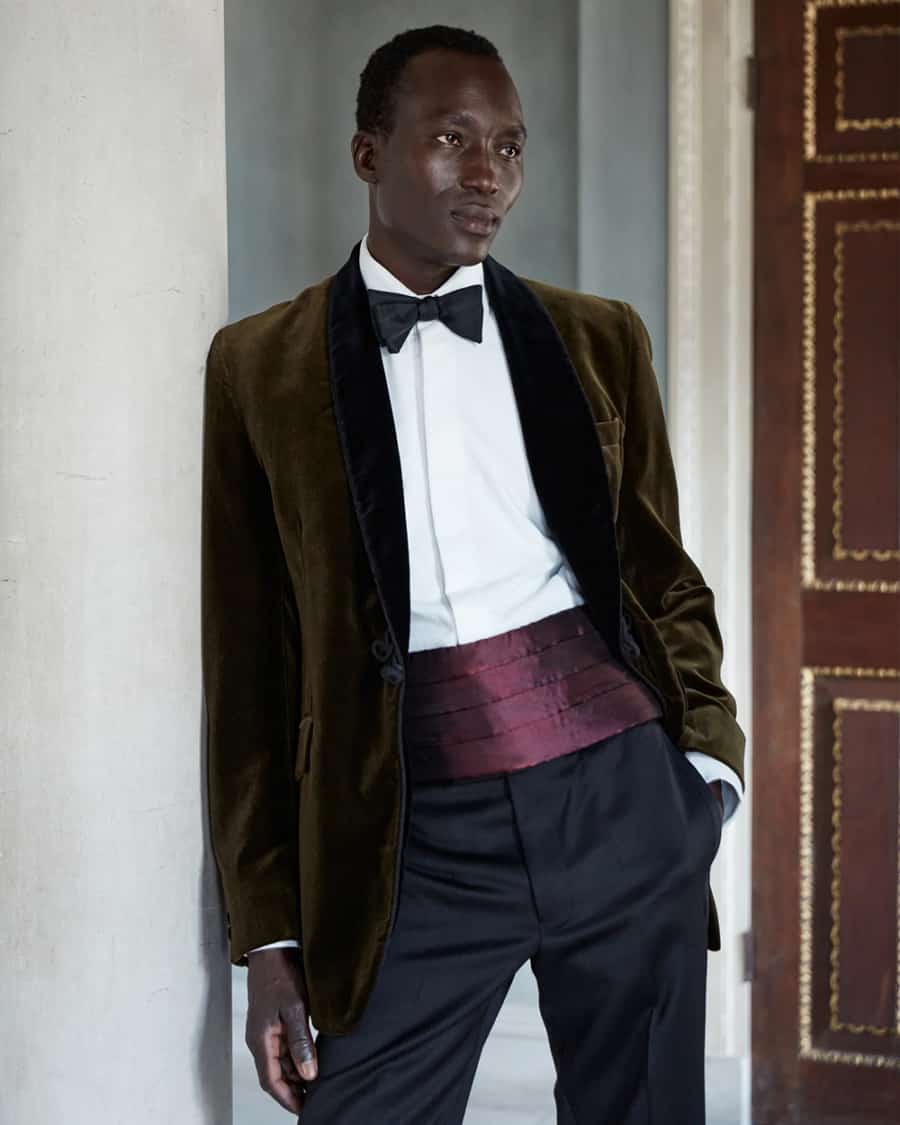 Silk smoking jackets are a rare beast. Much more common are cotton velvet styles with grosgrain silk lapels. Be mindful of velvet fabrics, since cheaper versions will often contain synthetic fibres. You want a 100% cotton velvet cloth for the best handle and drape. 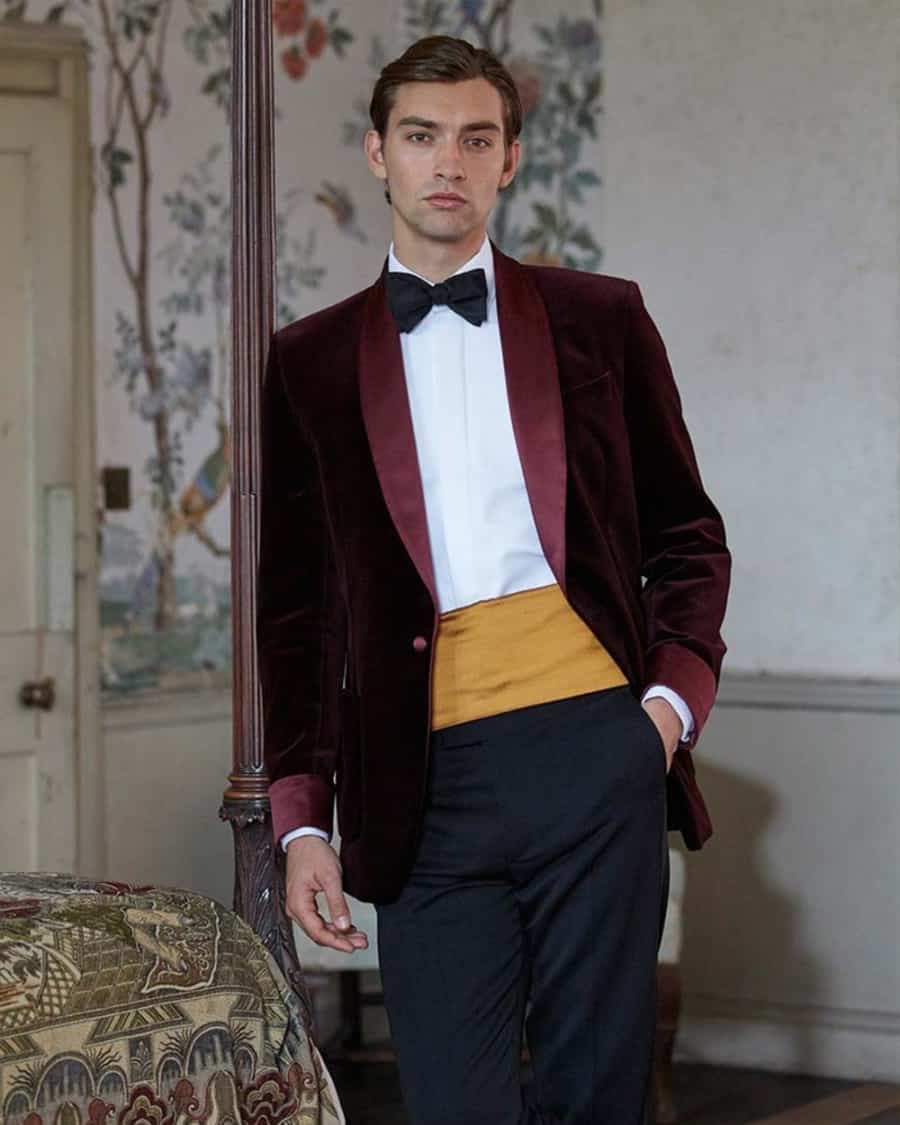 The sweeping shawl lapel is the hallmark of the smoking jacket, so don’t settle for anything else. Quilted lapels are a throwback to the earliest smoking jacket styles and, being more casual, are mostly redundant these days.

Instead, you’re likely to find contrast tone velvet (i.e. a burgundy smoking jacket with black velvet lapels) or silk grosgrain lapels, but the former is much more common. 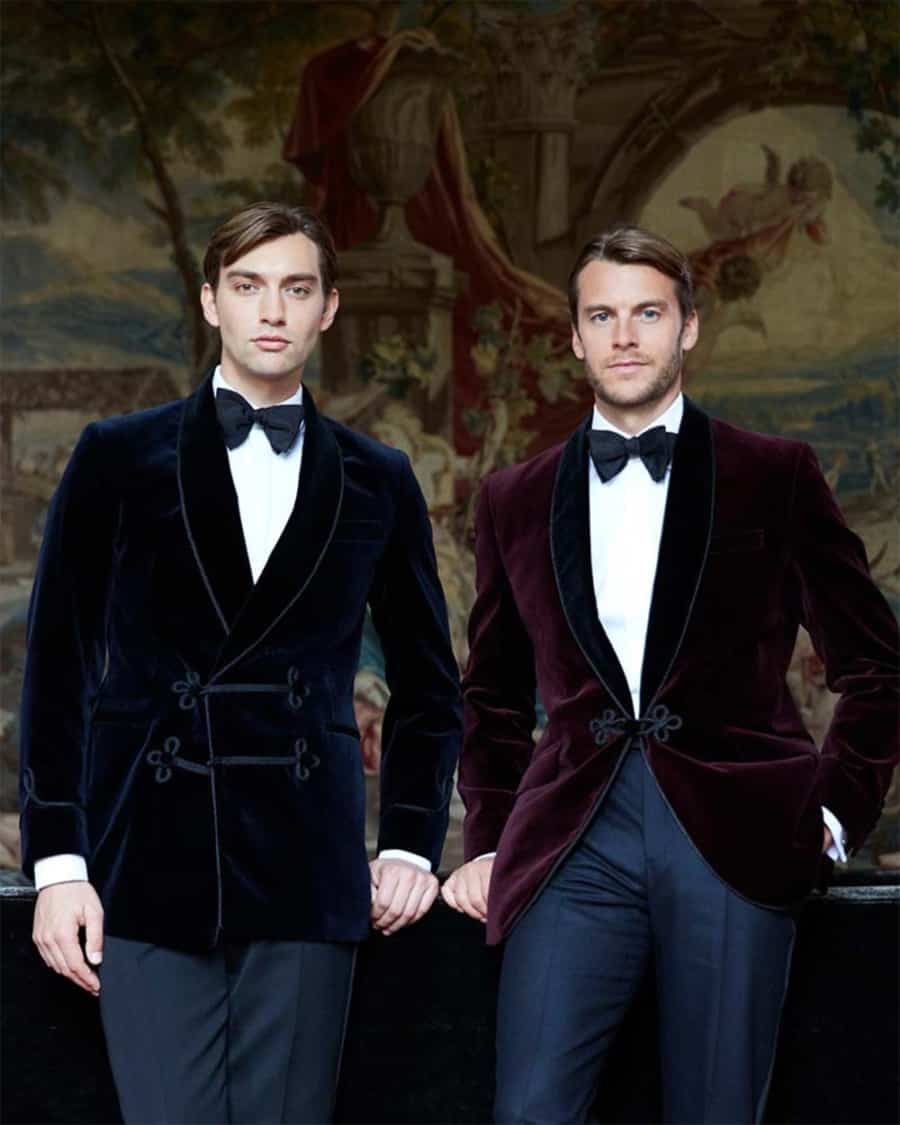 As for the fastening, button closures are the most modern option and best suited for wearing in 2022 as a black tie alternative, whereas toggle closures with frogging have a more vintage look. 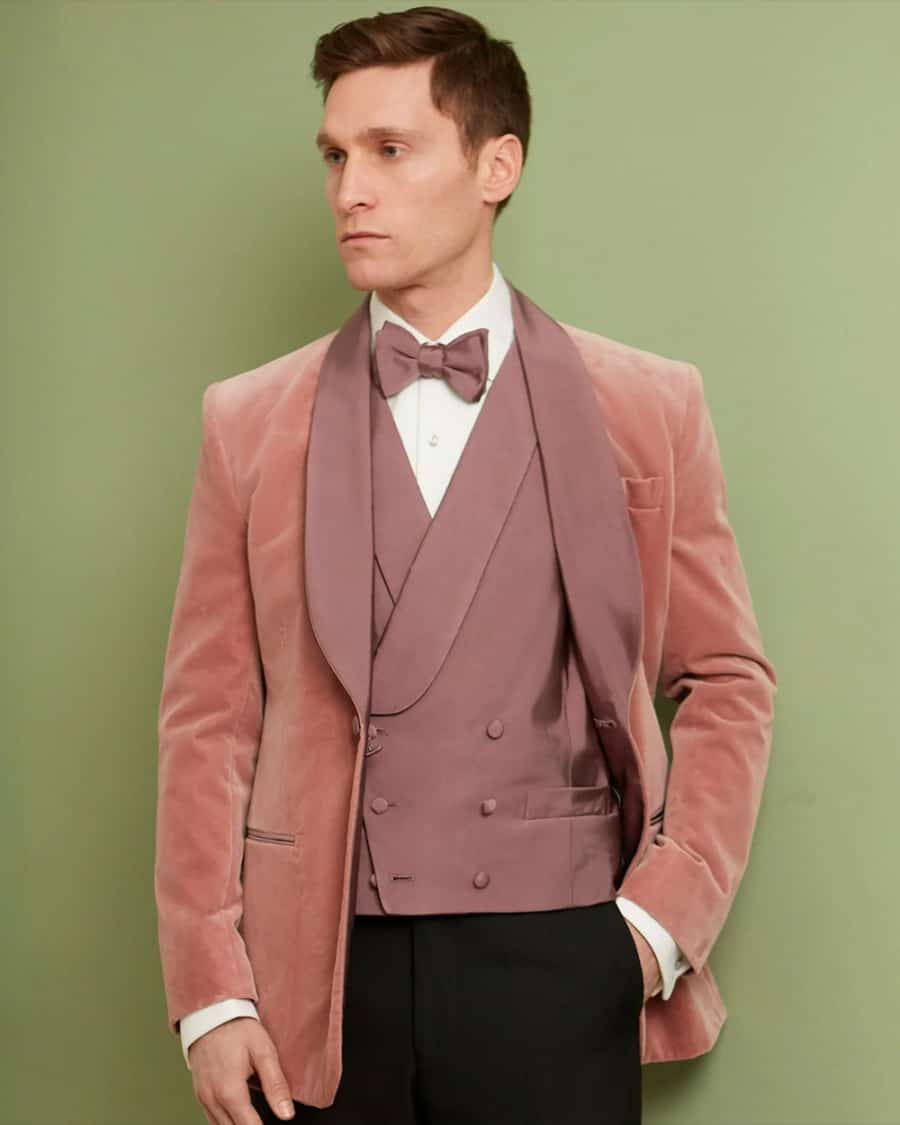 Just as the palette of velvet dinner jackets has expanded, so too have smoking jackets. From mustard, pink and burgundy to racing green, navy and black, there is no right or wrong answer but merely personal preference.

When opting for brighter tones, it’s a good idea to find styles with tonal lapels because the contrast between, say, a pink jacket and black lapels is simply too much. 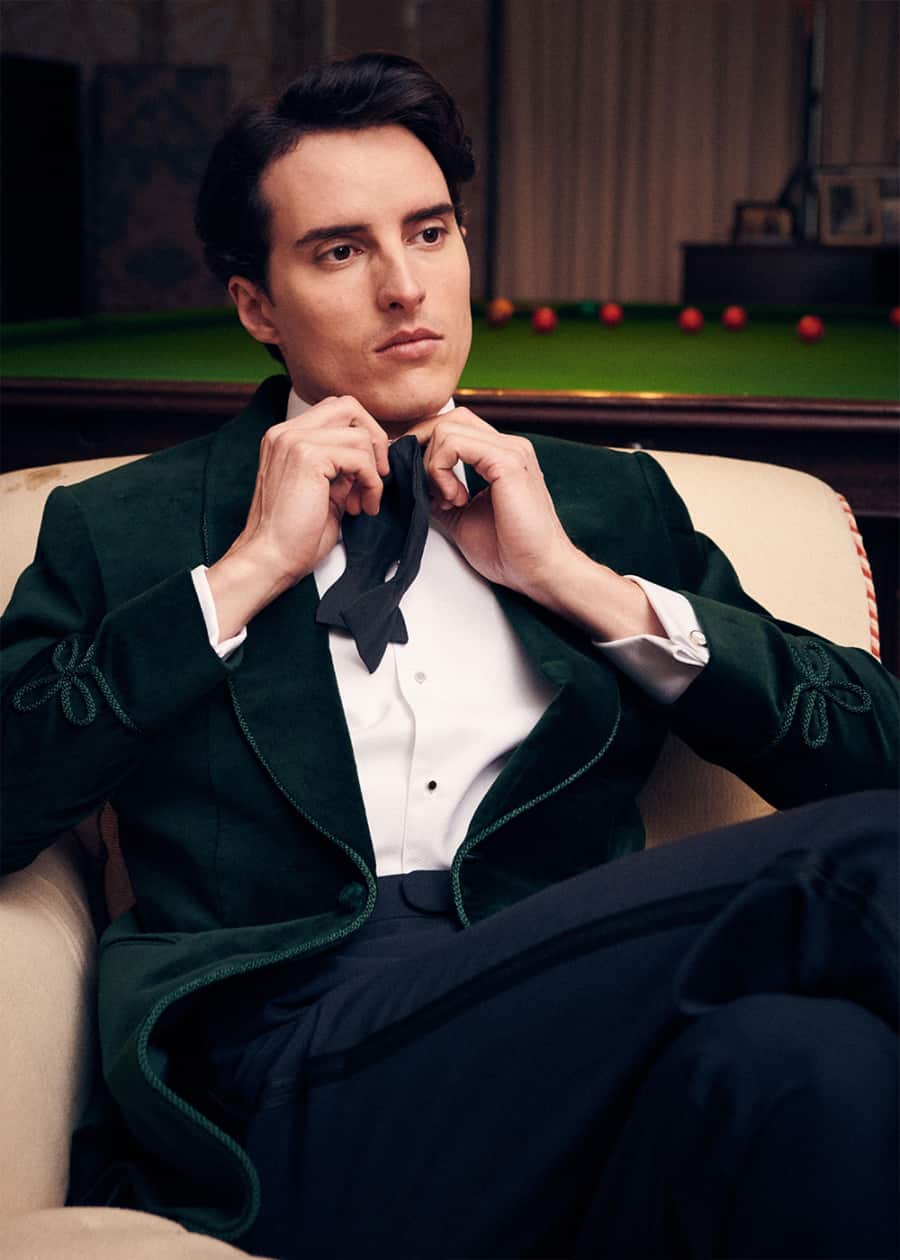 Traditional smoking jackets with quilted lapels often featured matching fold-back cuffs. However, you’ll find that most present-day smoking jackets do not feature these, instead favouring simple four-button working cuffs, with or without frogging details.

When to wear a smoking jacket 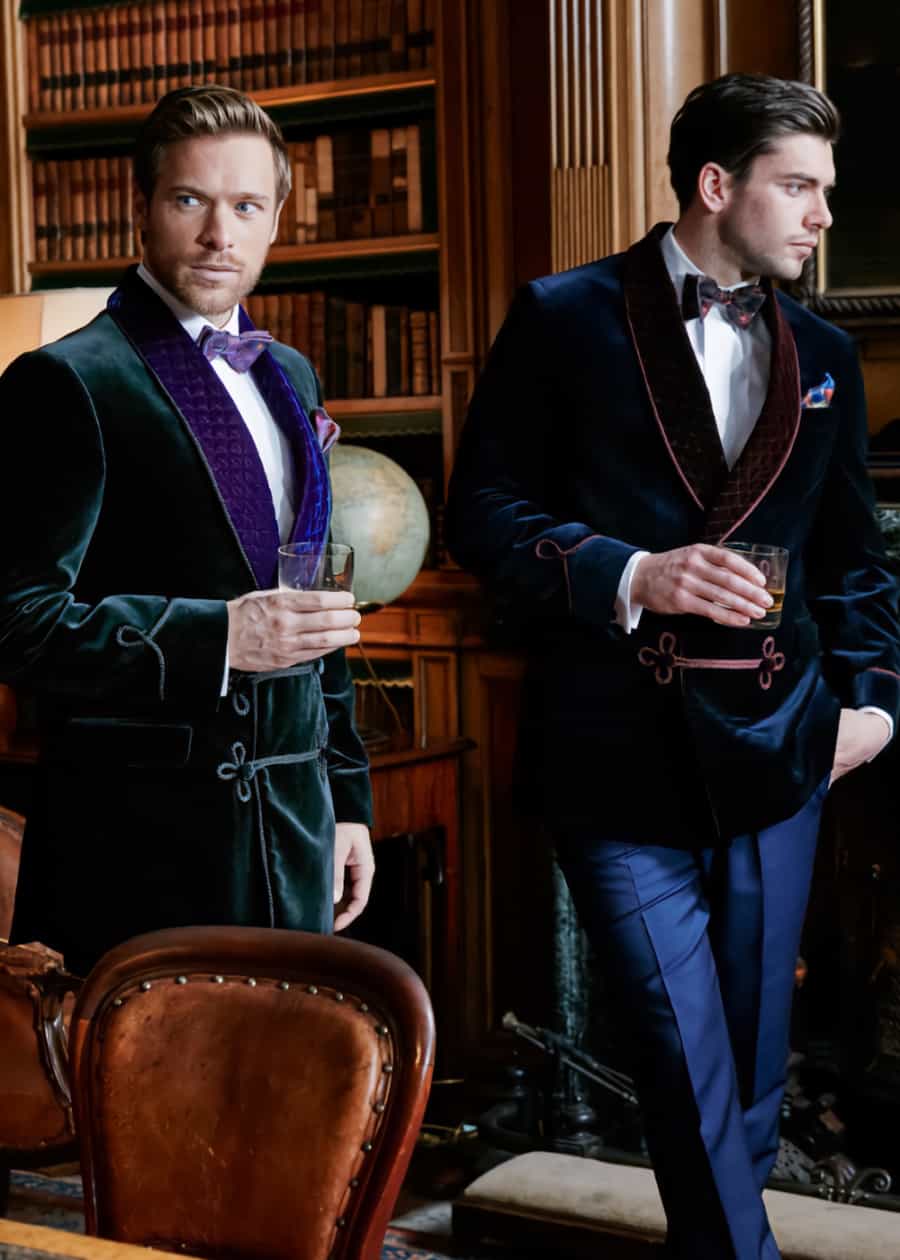 Given that the opportunities for wearing formalwear have certainly diminished since the early part of the 20th century, one is left with few reasons to wear a smoking jacket other than as a black tie alternative. And even then one must be careful that the host doesn’t wish everyone to appear in classic black tie.

You can of course be unapologetically decadent and wear it around the house in the evenings, but it is better suited to smart formal functions such as galas, awards evenings or special birthdays.

How to wear a smoking jacket 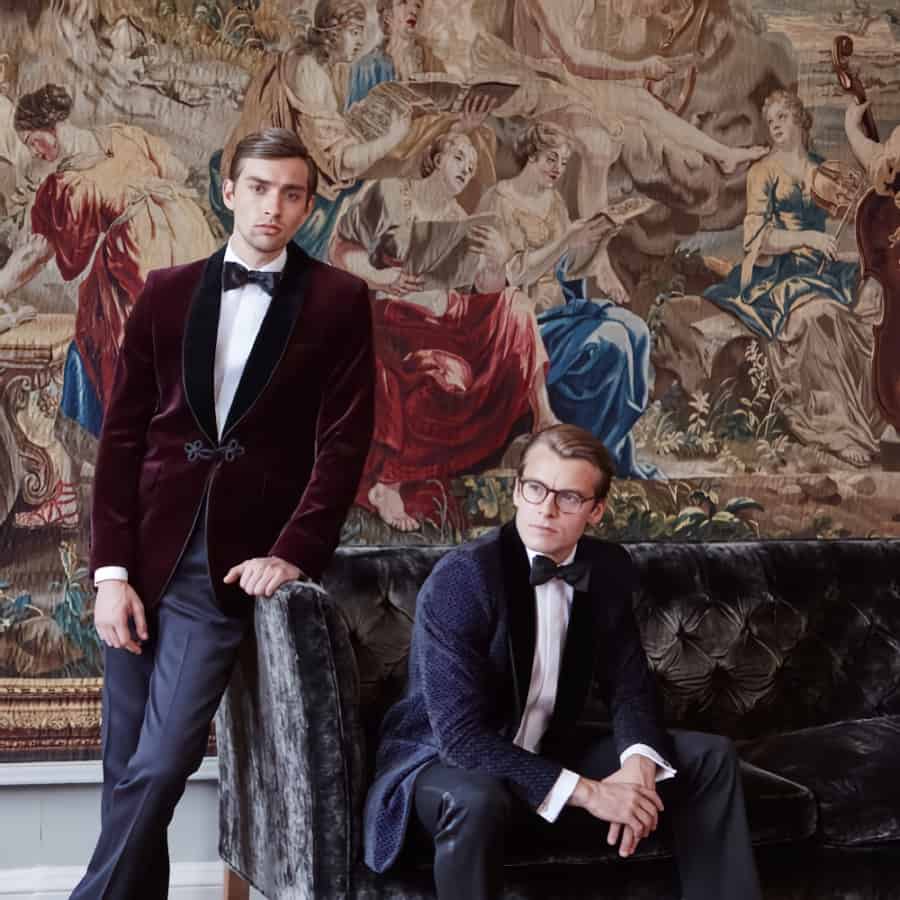 In short, traditional black tie is the best way to style a smoking jacket in 2022. Simply swap out the tuxedo jacket for the smoking jacket and you have a very elegant formal look.

Black dress trousers with a satin stripe down the side, combined with black leather (or patent leather) Oxfords completes the bottom half, while a plain white dress shirt and black silk or velvet bow tie wraps up the upper.

Dress shirts come in a number of different styles such as bib fronts, pleated fronts and even ruffles, but given that the smoking jacket is quite decorative in itself, it’s advisable to go with a plain shirt with a hidden placket, otherwise it can all get a bit messy.

If you’re going to wear the smoking jacket at home, then there are no rules whatsoever. Just throw it on top of whatever you’re wearing and lord it around the place.

With a flagship store on Pall Mall, Favourbrook is London’s finest formalwear specialist and does a particularly excellent collection of cotton velvet smoking jackets each season.

Founded by menswear designer Oliver Spencer, Favourbrook’s smoking jackets come in both single and double-breasted styles and are produced in the capital.

Some styles are more contemporary than others, making them the perfect choice for black tie dress codes, but Favourbrook also has a great selection of traditional styles, as well as boasting a wide array of velvet tones, from navy and black to burgundy, mustard, and olive green.

With stores on Lower Sloane Street and Jermyn Street, Oliver Brown is a popular London formalwear and tailoring specialist. Renowned for its contemporary approach to traditional silhouettes, its cotton velvet smoking jackets are the epitome of this design ethos.

With a strong shoulder and available in two lengths, the Pembroke smoking jacket is a standout option, featuring beautiful tonal shawl lapels with piping. Elsewhere, the double-breasted Langton style is a modern classic.

An icon of Jermyn Street, London, Turnbull & Asser is renowned for its bespoke shirtmaking but has in recent seasons made great strides in expanding its tailoring and casualwear collections.

Made from the finest quality cotton velvet, Turnbull & Asser’s smoking jackets are available in stunning single- and double-breasted iterations in navy, black and a dark green hue.

The shawl lapels feature braided cord piping for a very sharp look, while the cut of the jacket looks immaculately modern.

Tom Ford can rightly claim to have pulled the smoking jacket out from the ashes when he reintroduced it into his collections and the world took note. Ford naturally prefers a modern silhouette more akin to a dinner jacket, and often eschews cotton velvet for viscose, a semi-synthetic rayon fabric derived from wood pulp that is most often used as a silk substitute.

Whether the cachet of having ‘Tom Ford’ on the label is enough for you to fork out four-to-five times more than similar options from other names on this list is another matter, but there’s no doubt that Ford’s velvet jackets are beautifully crafted and look exquisite.

Derek Rose is best known for its loungewear so it should come as no surprise that its smoking jackets are not destined for smart black tie functions. They are much more at home at, well, home.

Cut with a minimalist eye, Rose’s Lincoln 11 smoking jacket is made from fine-grade worsted wool that ensures “warmth, comfort and durability without being heavy or bulky”.

With a tied waist, shawl collar and traditional turn-back cuffs, it’s a stylishly decadent way to kick back at home this winter.

Having been established in 1689 and the holder of Royal Warrants, the fact that Ede & Ravenscroft is still operating from Savile Row today is testament to the tailoring house’s skill and reputation.

While it doesn’t market ‘smoking jackets’ per se, its shawl lapel Dumont velvet jackets are modern smoking jackets in everything but name. Available in teal and pink velvet options, the Dumont is a single-breasted one-button style that makes for a bold alternative to traditional black tie.

Based on Clifford Street, Mayfair, just a stone’s throw from Savile Row, Connolly is a British luxury heritage brand renowned for its minimalist style and exquisite use of fine fabrics.

It only has one smoking jacket in its collection, but one is all it needs. Cut in a loose, contemporary style with silk grosgrain lapels, it’s designed to be worn as a black tie alternative with Connolly’s smoking trousers, replete with satin side stripe and an elegant single pleat.