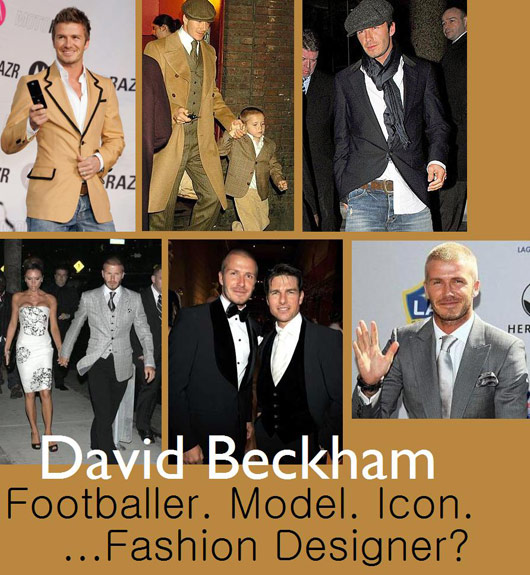 A marketable name is one of the great commodities of the modern world. Names are bought like property; propped up, squeezed of their use and then traded on. The market for perfume is a perfect example. Celebrities who wouldn’t know a bass note from a bass guitar team up with people who do to produce their ‘signature’ scent; the product is invariably awful, the margins are invariably huge.

There is something so nauseatingly sweet and shiny about that word; ‘celebrity.’ It seems forever sprinkled with glitter. The Beckham family, who owe much of their wealth to the professional success and consistent marketability of the patriarch, are of particular interest to all ‘celebrigorgers’; they begin salivating at the sight of pink neon headlines like ‘Victoria in Crisis’, licking their lips at the prospect of ‘Exclusive Pics of Beck’s Holiday Yacht.’ And it is because of this hunger, this constant need of the masses to be updated of events in their world that Mr and Mrs Beckham continue to be a marketable product.

Mr Beckham has long ceased to be much of a marketable product in the world of professional football. As a living football icon, he is unparalleled but he’d be lucky to rejoin a competitive European league. He is old, has been performing very averagely of late and is no longer hunted by the grand clubs of Italy, England or Spain. Fortunately, he has found a side career as a clothes horse, brand ambassador and extraordinarily well-paid model and now it seems he wants a cut of the creation too; that’s right folks, David Beckham is launching his very own menswear collection.

Dismissed him already? Well, that’s to be expected. Many women have dismissed his wife’s ability to design women’s clothes and have predicted her label to flop, so it is likely the same prediction will be made about her husband, especially considering that Mr Beckham’s collection will be produced in conjunction with his wife’s new label. Why use him? Firstly, he is a household name in Europe, certainly and he has a popular following in football-mad Asia too. He’s better known now stateside, although the nation’s lack of interest in ‘soccer’ means plenty of Americans will be unaware of his existence.

Secondly? The man does actually have an eye for style, and manages to make other famous and supposedly ‘stylish’ sportsmen look distinctly average; if Tom Brady is ‘stylish’ then Beckham is Beau Brummell. He loves tailoring too, and is keen on an array of vintage styles, particularly the baker boy flat cap and the three-piece suit. The designers will no doubt have their own ideas, but Beckham will have to be the muse for their work if the brand is to have any legitimacy and those hired to perform that work will be relieved that the multi-tattooed multi-millionaire can actually dress.

I fully expect expensive fabrics to be used (expect almost everything to be in cashmere), and the suits, considering the way he wears them, may well have a decent cut; consequently, I also expect the prices to reflect this. This is where the problem may lie; too high a price, and the products will bomb.