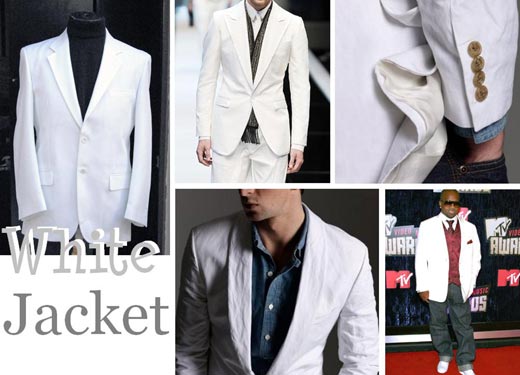 If there is one aesthetic I have no interest or skill in adapting it is that of the 1970s Martini Cinzano man. The gigantic open collar, the hideous golden necklace resting in the unspeakable mound of chest hair and the tacky pastel suits; I find it all disturbingly ugly. Naturally, I recoil from anything that I see that indicates such an aesthetic – including items in my own wardrobe. A recent wardrobe carousel revealed to me my collection of summer jackets. I brushed the sleeves in a satisfied manner, like the admiring hand of a collector testing the tangibility of his treasure. However, one item caused my eyes to widen and my hand to slip. It was stark, shocking and rather cheap-looking; a bright white two-button cotton jacket that I had once considered an essential part of my wardrobe.

I took it off the hanger tentatively, slightly blinded by its reflective capabilities in the early May sunshine; “Can I even wear this?” I thought anxiously. When on, it washed all colour from my face and accentuated the uneven blemishes on my late-spring untanned skin. It was too powerful a contrast with the trousers I was wearing, so I took out my selection of paler summer trousers and tried to produce a tasteful ensemble that would avoid vulgarity and banish all thoughts of the nightmare of Martini Cinzano. A pair of navy blue linen trousers, a natural choice, looked undignified and tacky with such a jacket; “Christ!” I thought “Backstreet’s back!”

I then tried black trousers, which looked cheap, red trousers (which just looked vulgar) and finally settled on avoiding brights and moving towards paler and pastel colours; I had avoided them thus far as I associated pastels with the sweaty nemesis of hairy Martini man. A pair of light blue trousers softened the starkness of the white jacket, particularly when wearing the two with a pastel yellow shirt. Likewise, a pair of light stone coloured trousers quietened the contrast; the problem, I could see, was that white is simply too noticeable and too ‘in yer face’ to wear elegantly with dark trousers. It has the effect of shortening one’s legs.

The other problem is that bright white cotton is associated with the clinical. A bright white jacket, if worn incorrectly, could look just like a doctor’s coat. To avoid all medical connections, any ‘isolation’ of the jacket must be avoided – a white jacket is isolated when its luminosity is all too evident. Pairing it with pastel shirts and trousers as well as carefully chosen accessories should avoid any connotations or suggestions that the item is intended for the strip-lit corridors of the nearest hospital. The other thing I discovered, through experimentation, is that wearing white shoes with the jacket, whilst sporting odd coloured items across the rest of an ensemble, has the effect of splitting the vision between the torso and the feet, to the expense of any detail or colour variation in between.

Finally, the importance of buttons on a white cotton jacket cannot be stressed enough – white is the perfect ‘blank canvas’ on which to show off fine horn. The most important thing to remember when selecting is to choose paler, smaller buttons – dark, oversized buttons are distracting; think peanut butter not mahogany.