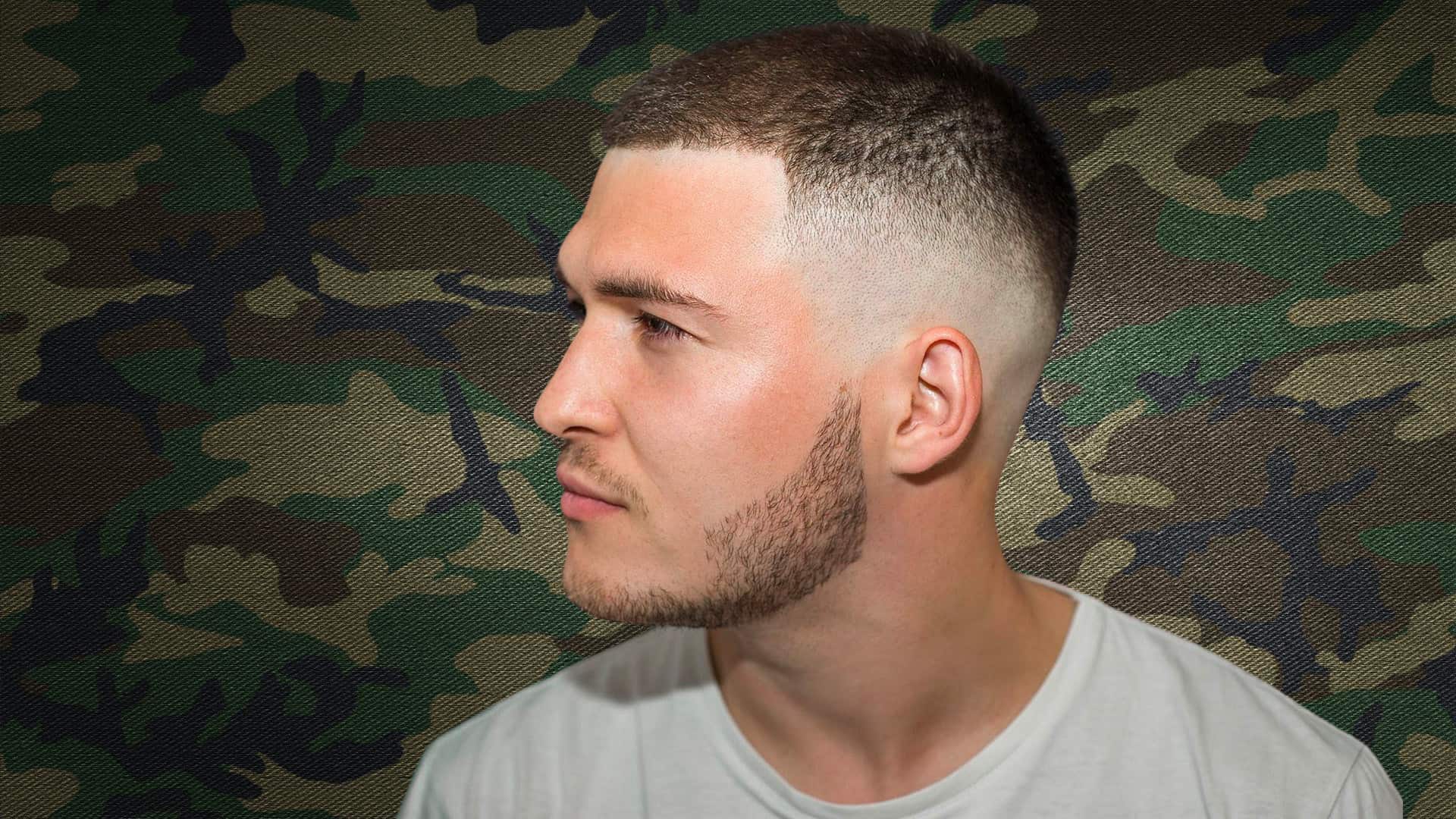 Short, sharp and masculine, we showcase the best military haircuts for men and show you how to modernise them for 2022.

A-teeeeeen-hut. If it’s a military haircut you want, soldier, then listen up because there are rules of engagement to follow. Pretty much all military haircuts are short, sharp and regimented. Practicality understandably takes priority over any sense of expression and individual ﬂair: there is no room for long-haired hippies in this unit, son.

For some forces, it’s literally written down in black and white. According to the relevant British Army handbook, unless you are religiously exempt, your hair is required to be “neatly groomed and secured or styled back from the face”. Your hair style or colour shouldn’t be “of an exaggerated nature” and the length shouldn’t reach the collar or down onto the ears. If you have sideburns, they shouldn’t go below the ‘mid-point’ of the ear.

For US Military personnel, hair must be considered by the relevant authorities to be “neat and conservative” and suitably accommodate the types of headgear you would expect to see on a soldier, such as berets, caps and helmets. A US military haircut “must present a tapered appearance” and “terminate” at the base of the neck.

Recruits don’t need a fringe flapping in their eyes when they’re on manoeuvres so any combed hair shouldn’t fall over the ears or eyebrows, or touch the collar – although a parting is permitted. In case it wasn’t clear, grunt guidelines read: “Extreme, eccentric or faddish haircuts are not authorised.”

The rules are understandable. As well as headgear and battlefield practicalities, there’s an element of squaddie cohesion to the clipped, permitted styles. Like the uniform recruits wear, military haircuts help ensure that everybody appears as equals.

They also carry a sense of professionalism, no-nonsense toughness and old-school masculinity – all traits that carry over to civvy street when non-serving personnel adopt the same styles.

Short-back-and-sides haircuts make for a clean, adaptable style. And despite a seemingly restrictive rulebook, most of them can also develop into something more expressive if you don’t have a drill sergeant making routine inspections.

The Best Men’s Military Haircuts For 2022

One of the most popular military haircuts, a high and tight has all the qualities and convenience of a faded buzz cut around the back and sides (which should be cut completely to one grade in this case). However, a subtle amount of additional length is left on the top. This slightly longer hair towards the fringe can be texturised or combed into a minimal sweep that’s guided either straight forwards or over to one side.

Out of uniform, we’ve seen high and tight cuts worn by the likes of Ryan Reynolds and David Beckham. They suit pretty much any hair type and can look strong either connected or disconnected to a beard. You can also introduce a fade or taper up and around the ears for a less harsh, more sophisticated finish.

On a classic high and tight you will have such little hair to work with, but you can look to enhance the style further by keeping the hair on top grown slightly longer to achieve more dramatic and playful volume. Either way, a lighter, texturising clay or paste for styling will leave a high and tight cut looking nicely matte and natural instead of greasy, thin or too weighed down.

Clean and simple, a military buzz cut has traditionally been a one-grade-all-over haircut. New recruits could expect one not long after they’d signed up. The style ensures easy maintenance and hygiene and in an army context completely neutralises any sense of personal expression to keep everybody on a level, communal ground.

It’s also pretty badass, of course, associated with punks and prisoners as well as men on the front line. On screen, you’ll see it modelled by the likes of Jake Gyllenhaal and Tom Hardy, showing how a solid buzz cut suits guys with square jaws and squarer-shaped faces – plus a darker natural hair colour.

As far as elevation goes, you can introduce a clean taper or higher fade around the back and sides to add a bit more complexity and definition, but honestly, the appeal of this one is its fuss-free nature. Literally and figuratively, you don’t want to mess with it.

Similar in shape to a high and tight, a crew cut is a relatively simple haircut for men. The military version follows the clean template of a short, tapered back and sides while leaving a slight amount of length at the front that shortens towards the back. If it’s long enough, it can be styled into a more prominent quiﬀ or side sweep.

Was there a more popular men’s hairstyle in the 20th century? We’d doubt it. It’s a balanced, neat cut that’s easy to maintain and suits a variety of face shapes. So it’s no wonder men have been wearing it for decades. That includes A-listers like Justin Timberlake, who favours a lightly textured crew cut, or Matt Damon, who usually keeps it longer and spikier.

This proves you can do your own thing with this versatile style: it can work for round and square face shapes and also adapt to smart or messy styling depending on your preference. To take things a step further, work a dramatic fade above the ears to emphasise more of the weight on top, or introduce a parting for a statement sideways sweep.

A regulation cut is a military classic. A real throwback look that rose to prominence in the 40s, it epitomises smartness and is defined by a clean, razor-sharp parting on one side with the hair combed away from it in either direction. It’s very Don Draper-esque, due to the straightness and slick product finish.

This one suits finer hair that takes direction, as opposed to more stubborn and static thick hair. True to form, the military version has a harsh short back and sides, but a modern take on the regulation cut can see the hair left longer all over with a more textured side parting – not as slick, not as flat.

You can also go quite a bit higher with the fade or keep to a low taper around the ears depending on how much skin you want to show and how weighty you want the top to appear.

The regulation cut has become a timeless classic and can be adapted either true to its short and slick roots for a smarter appearance, or with edgier textured styling for a longer, modern finish.

A bold, present-day example of how to adapt it comes courtesy of Brad Pitt. In tank drama Fury, his Staff Sergeant Don Collier showcased a modiﬁed regulation that kept the overall shape similar, but integrated an undercut and brushed the longer hair on top backwards instead of sideways.

With a similar shape to a crew cut, the Ivy League haircut is rooted in not just the military, but also prestigious academic and sporting institutions. The mid-century look is deﬁned by hair on top that’s a bit longer, enabling a clean, lifted side parting.

Historically, it’s a slick style. Pomade is used, creating an upright fringe, combed to a sideways sweep on top, though it’s still neat and tidy like all military haircuts. Over time, however, the Ivy League has adapted and become a looser, preppy look with more texture and notable volume. George Clooney and Ryan Gosling are both Ivy League fans, balancing that handsome military precision with longer, looser texture.

The modern take is a great look for men with particularly thick or dry hair, but it can easily be adapted for longer, finer hair too. To achieve the less regimented and modernised version, use much lighter styling products like creams or clays to lift and ruﬄe the hair as opposed to slicking it straight and ﬂat.

The back and sides can also be a little bulkier and even scissor cut to creep around the ears, balancing out the overall shape, leaving a more natural, rugged finish.

A classic ﬂat top is quite an extreme haircut, the bold shaping suiting the persona of a strict army major to a tee. With the back and sides cut razor sharp and generally down to the skin, the hair left on top should stand to attention vertically and be cut oﬀ across the top in a precise horizontal line. It creates an impactful, square outline that conveys authority and, maybe, a hint of aggression.

Want an example? See Ivan Drago, Dolph Lundgren’s iconic bad guy from Rocky IV. And after Drago, it feels like just about every male pop star of the 80s gave this haircut a go. Flat tops particularly suit men with strong, square head shapes and fuller hair – you don’t want any awkward patches of scalp showing. Flat tops also really complement afro-textured hair (look no further than the Fresh Prince himself) and can be built up to quite dramatic heights with the outline of the curls either squared oﬀ or curved into shape.

Today, you can enhance the already-bold style by having your barber reinterpret a ﬂat top to resemble more of a rockabilly pompadour. Instead of a harsh, square cut, the hair on top can be longer and swept back in more of a curve.

It starts with some major height in the fringe and blends neatly down into the back. The sides should still be short, but not necessarily cut down to the skin, in order to blend naturally upwards into the more rounded top and achieve a less disconnected overall shape. 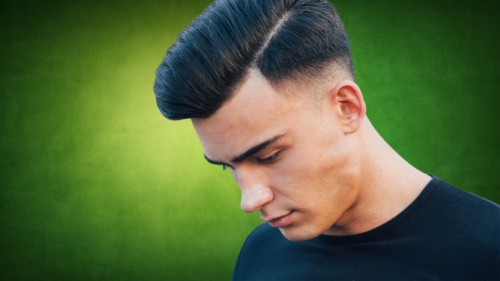 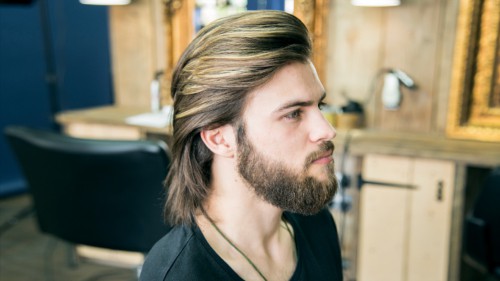 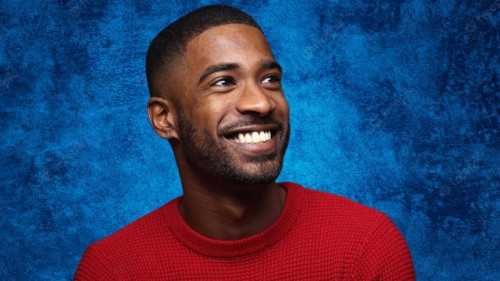 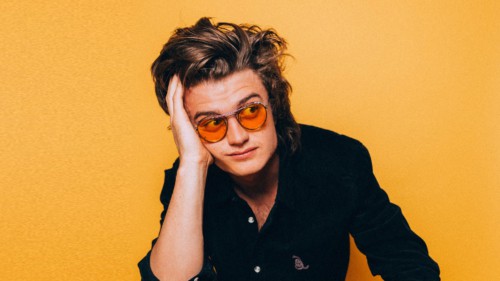