“Sorry, do you have a problem with my typing?” someone once asked me, as my wincing face squinted and sneered at the hands of the person delivering the question. I did have a problem and it was to my chagrin that I could do nothing to abate it. My headphones, that joyously cocooned me from the audible horrors of a university library, were on my desk in my room. The incessant tip-tapping, the constant, irritating rhythm of it all distracted me from all academic thought. So much so that I began to question the sense of keyboard manufacturers – why could keyboards not be silent like a Yamaha keyboard action, for example? – and the insensitivity of loud typists to the concern that everyone in the library can hear their thunderous industry.

“I just have a problem with loud typing” I responded “it really winds me up.” In good spirit, the typist leaned over, conspiratorially, and informed me she also hates irritating, rhythmic noises. “Oh yes?” I proffered. “Flip flops” she nodded “can’t stand them; slap, slap, slap, slap.” I beamed in empathy. 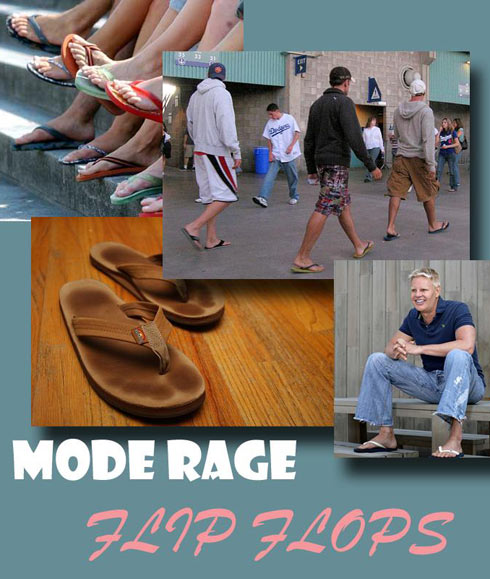 I don’t think there is an item of footwear I loathe more than the flip-flop. And not only as an item of menswear; I think they are equally repugnant on women. I might reserve a good deal of dislike for horrible Prada training shoes and take a dim view of wearing New Balance running shoes with chinos but, despite the horrible aesthetics, I can still see a point to them. They serve a purpose, are comfortable and, though inelegant, are not designed or generally worn for situations requiring smart socialising. Flip flops however, which should be renamed ‘slap-slaps’ for phonetic accuracy, are worn in such situations.

Even in the northern European capitals such as London, people have been known to wander into chi-chi bars wearing them, demanding tables and kissing each other with nauseating self-awareness, sliding across the marble floors and crossing naked legs and a filthy, flip-flopped foot into linen tablecloths. For a man to flip flop in summer means he is one awkward slip away from the ultimate hippydom; walking the grimy streets barefoot.

Comfort is sometimes mentioned as a factor in wearing them, although how having a piece of rubber wedged between your toes, gradually digging backward like a miniature pick-axe as you push forward, is defended as an example of comfort I will never know. They are certainly easy to put on, and remove, which is why they are often used on the beach, to protect sun-worshippers soles from the scorching sand. However, rarely are wearers of flip-flops inclined to carry smarter footwear to don once they have departed the beach. Instead, they wander into town, griming it up and filthifying their feet in the dirt, the piss, the dropped ice-creams and week-old gum splat. It is because of this that they have become moderately acceptable and even desirable for some.

“I can just pop to the shops without having to think” an old friend told me “I don’t need smart shoes to go to the shop. Who’s going to look at me there?” Erm, the entire store. Who will hear you coming a mile away. Though they may be easy to scuff into, your feet will not thank you for being tempted by a pair of banana-coloured Havaianas.

Though most people think that the human foot is appalling and should be entirely covered, I simply think it requires better forms of presentation. In my opinion, a naked foot is actually far more acceptable than one wedged into a pair of flip flops, but for when footwear is required, sandals and espadrilles are far more appealing.

‘Oh but sandals’ I hear you cry ‘offer as little protection for the foot (and the eyes of onlookers) as a flip-flop!’ This is not entirely true. Although they expose similar amounts of foot, flip flops – due to the nature of being ‘loose’ on a foot – reveal soles and heels; an absolute horror when they are dirty. Sandals are secured to the foot and do not reveal the soles and the decent pairs usually cover the bottom of the heel too. Espadrilles are perfect for those who wish to cover the foot without smartening the footwear too much.