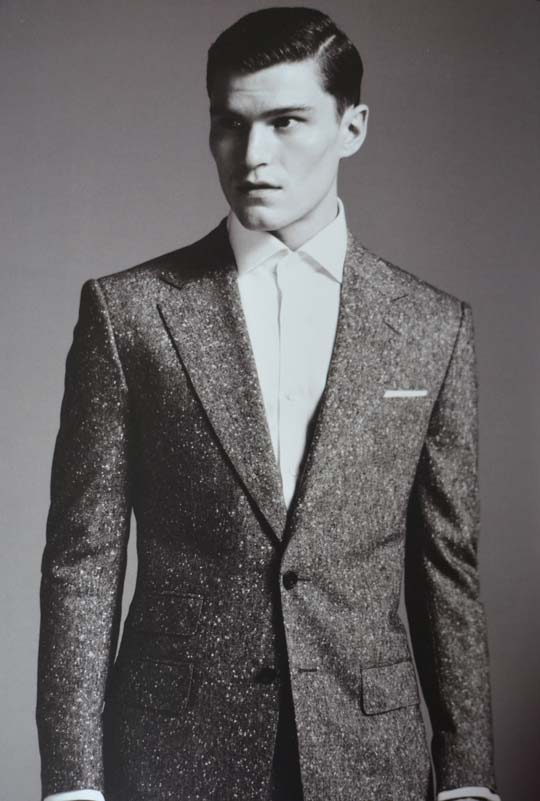 To say that Marks & Spencer’s 2013 autumn/winter clothing collections were keenly anticipated is a gross understatement. Not that it had anything to do with fashion, mind you. “Has there been a great deal of nervousness around these collections?” I asked an M&S menswear employee at the recent press preview launch at One Marylebone, on a deliciously sunny evening last week. He rolled his lip in a distinctly nonplussed fashion; “We’re confident about what we’ve put out” he said, almost blissfully above (or beneath) the concern that senior figures and analysts in the City have expressed; that this collection, for the loss-making clothing divisions, is make or break for Marc Bolland, the chief executive of M&S.

But then, fashion is a very different world. It could be armageddon in the financial markets, bombs could very possibly be falling all over town, but there will still be someone in a short-cut, Thom Browne-ish suit who crosses his arms and remarks that a certain combination is ‘a lot of fun.’ Fashion is pure asbestos. Nothing burns it and nothing grips it around the neck and inflicts upon it the reality of the world. Like a spoiled child, it is parented with kid-gloves, permitted to explore, allowed to express – and the world is expected to do nothing but applaud. But as I have previously explained; this didn’t really have much to do with fashion.

What it’s really about is brand credibility. Marks & Spencer is a Jekyll & Hyde company; one division, food, is strong, respected and delivers substantial profits. The other, clothing, is a disfigured mess; an expensive balance sheet liability. At the moment, Marks & Spencer’s brand is relatively strong, but food won’t hold the fortress forever. At some point, the shareholders will tire of quarter upon quarter of clothing’s losses and the company’s leadership will be strongly encouraged to focus, or perish.

I have never been particularly enamoured with the menswear at Marks & Spencer. It has lacked not only stylish design and individuality, a lot of it has even been entirely unsuitable for wardrobe basics. It is one of the last places I would look for a blazer, or a tweed jacket, and that – considering it is an historic, British retailer – is saying an awful lot. My memories of M&S sartorial wear were, until recently, very unpleasant: enormous jacket armholes, large enough for an elephant’s trunk; boxy shoulders; unflattering cuts.

It was these memories that were at the forefront of my mind when I entered the preview venue; and in the deep, dark recesses of it when I left.

To say that it was a complete triumph is misleading; there were some very ordinary items on display, the sort of lazy, casual bumf that M&S has been addicted to flogging for the last 15 years. However, I am happy to say that these were few and far between. It wasn’t a revelation – much of what was there has been available from other retailers for years. What it was, was a revolution; the signs of a cold determination to steer the brand away from inevitable, pitiable decline and back into the Great Race of the British High Street. 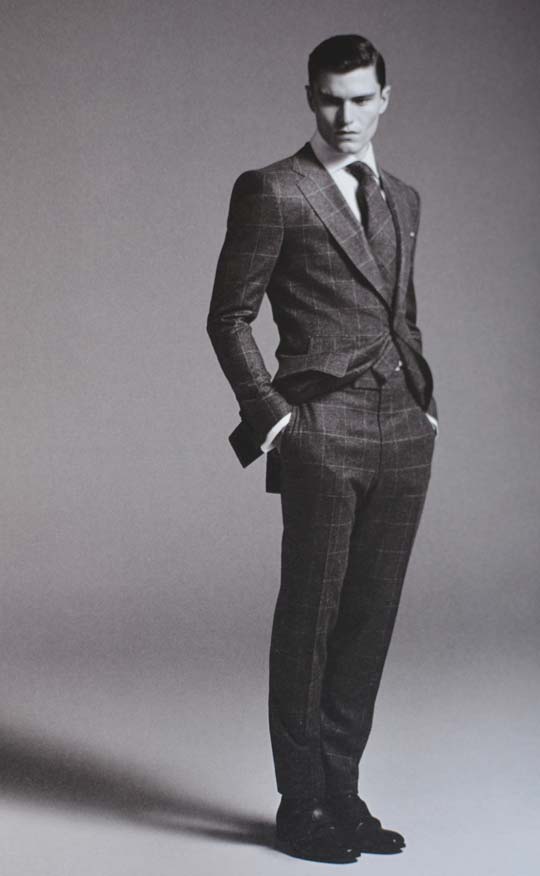 There was evidence of this across the board. A new, higher-end Best of British collection, celebrating the predictable but undeniably marketable elements of British menswear – wool flannel suits and Glen Plaid overcoats made from cloth from British mills – is the standout, but all collections have received attention, even leisurewear like Blue Harbour, which I remember consisting of cheap polos and unflattering chinos, now has the kind of items that possess the craft and detail of a more premium, preppy brand; making a Fair Isle sweater a ‘key piece’ is bold for a brand that has tried so hard for so long to battle it’s staid, grandaddy image.

All the old collections have had a bit of a rethink; Autograph, Sartorial, Savile Row Inspired, Collezione and North Coast. I’d hesitate to say they have been ‘trendified’ but someone has sprinkled a dose of TopMan on them. They don’t look the same, but they don’t look incredibly different at first sight.  Rather, it is the small things that have been upgraded. Plaid shirts aren’t just plaid shirts; they have an appealing cut and metal-edged ceramic buttons. Someone has thought about details for these collections, and it shows.

However, a new clothing collection alone won’t save the brand. This isn’t job done for Operation M&S Revival. As it stands, they’ve edged the clothing offer slightly up the charts, but the overall offer from M&S remains the same. “Do you know what I like?” I said to an M&S public relations representative as we toured the racks “I know it’s a press day, but what I like, what I really like, is the presentation here.”

Instead of the kind of presentation one is subjected to in a store – oppressively overlit; racks weighed down with every size imaginable (cheapening the garments immeasurably); hideous, toilet-cleaner yellow logos with ‘Your M&S’ – an appalling rebrand – patronising you at every turn – this was a presentation to rival a designer brand. There was no cheapness, no crass highlighted pricing. The pieces from the collections were racked together, sparsely, in a complementary way, as they are in Reiss, Massimo Dutti or Zara; you could get a feel for the whole collection in one, efficient glance. And when you looked at the price tag you were surprised; not that it was so much, but that it was so little.

To really conquer – and they must set out to conquer – the high street, they must play the giants at their own game. And what lies at the heart of that game is a harmless, but very real, deception. That what they receive is worth more than what they are paying; a stylish garment with details galore, hot off the fashion press, sold in a slick environment of spot-lit mannequins, sophisticated fixtures and fittings, atmospheric music and presentation-conscious staff. This is the real fashion; the fashion for the way things should be sold. And it is extraordinarily effective.