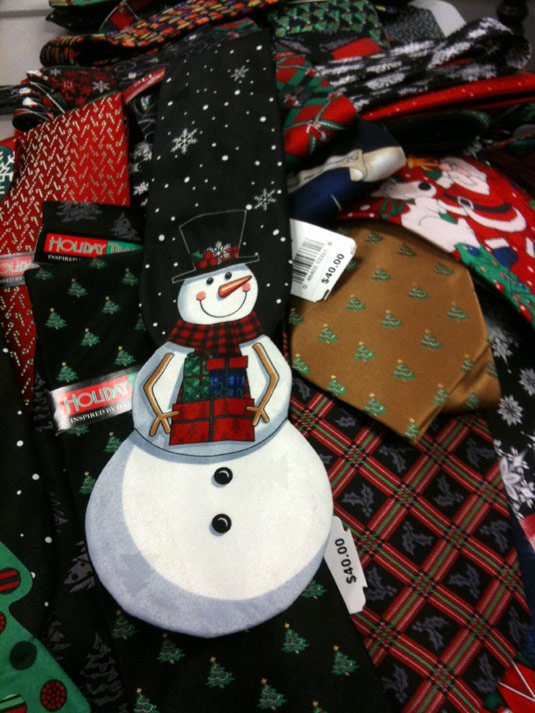 Recently, while wandering through a local department store , I noticed a table of post-holiday sale items. Novelty ties featuring Frosty the Snowman and Santa Claus were piled indiscriminately on the table. It was a grim reminder that the excitement of the holidays had passed. It was also a reminder of how much I absolutely despise novelty ties.

Novelty ties, typically made of polyester, feature a variety of garish images including commercial products, pop culture icons, sports teams, cartoon characters, and holiday themes. For some reason Tobasco hot sauce seems to be a popular theme in the novelty tie milieu. Once, in a fit of novelty tie hatred, I wrote the following haiku:

Spilled hot sauce on an Hermès?

I know. Terrible poetry. But you get the point.

Proponents of the novelty tie might argue that they are a fun way to show off your personality. But if you’ve got a solid personality, do you really need Bugs Bunny dangling from your neck? A man’s clothing should draw attention to his face where others can get a true sense of his personality. In opposition to this goal, a garish novelty tie draws all the attention to itself.

Novelty ties are also a jarring mix of the formal and informal. Neckties are typically worn with dress clothes. A tie that looks like a slice of bacon is just completely out of place. My tastes run more in the direction of a solid navy grenadine tie. When it comes to the novelty tie, I just don’t get it.