“Everyone has their favourite pair of shoes” a fellow club member announced rather suddenly, “what is yours?” “Mine?” I responded with uncertainty for although I thought it a straightforward, commonplace question, I was somewhat put out. As a collector, it is difficult to single out what is effectively the most important piece of a collection as you feel it adds too much lucidity to the theory that the rest of the collection, though desirable, is somewhat superfluous.

To acknowledge that there is one item that is above all others is rather like choosing a favourite child; whenever it is done, the repercussions are considerable. I informed the inquirer that I have no favourite pair, that all calfskins are equal and that I was fortunate to have as many shoes as I have. “I think” he said “it would be my loafers.” 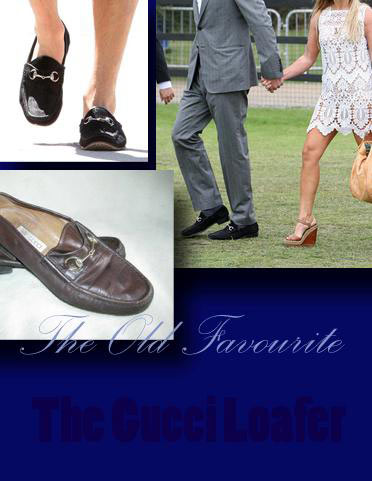 He pointed to a battered pair of suede loafers with a horsebit on the tongue, in the style of the Florentine saddler-turned-designer Gucci. “These are ancient” he muttered “never seems to be anything wrong with them.” They were a greenish grey, although it was clear that they had been black when they were bought, scuffed around the toe and somewhat misshapen by the unusually high instep of the wearer. The suede had worn like a batsman’s crease and the horsebit rattled loosely; these were shoes that had seen better days.

And yet, there didn’t seem to be a better day for them than this. The wearer reclined in a leather armchair, debating and guffawing with ease; paired with a simple linen jacket and cotton trousers, the shoes acquired an attractive wisdom. They might have been a deeper shade when newly acquired, they might have been considered more elegant when they did not show the signs of age and use but there was something dignified about their lived-in state.

I have the same feelings for a pair of velvet slippers that I received for my 19th birthday, some 9 years ago. Worn consistently since then, they have been similarly deformed by my own feet; the original Albert slipper line is long gone, the plush is very worn near the sole and the years of amateur haute cuisine, birthday champagne and countless dripping towels have taken their toll on the upper. Despite all this, I wouldn’t walk around the house in anything else; they are a favourite, a warm reliable pair of faithful feet-warmers that have aged with distinction, much like the beloved Gucci loafers that have seen the gentleman through more than twelve summers.

When I asked him if he planned to replace the pair, he looked at me sternly with notable affront, as if I had just asked him whether he was looking to trade in an ancient Labrador for a pipsqueak pup. Why would he when these are perfectly all right? Certainly a new pair would look smarter, he suggested, but they aren’t formal shoes; “I’m not opening a museum or launching a ship” he said “they’re just something for a tired man to shove on before he meets his friends.”