One For The Albam 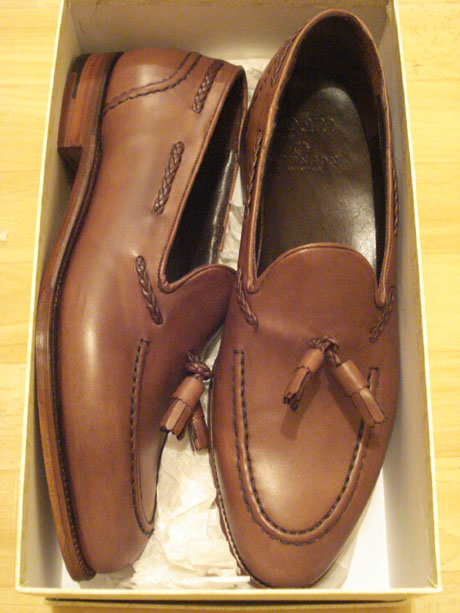 These beautiful loafers are my latest purchase. While highlighting them a while ago, and having lusted after them since, I’d only just got the spares together to buy them.

They’re a beautifully crafted collaboration between Northampton’s Grenson and British independent clothier Albam. Sadly, the photos don’t do them justice.

I’ve often found it difficult to qualify what Albam’s style is. The clothes come under the category of casual, but as to the aesthetic, that’s a little harder. But, if Savile Row is Cary Grant then Albam is surely Steve McQueen.

A store I mentioned briefly in my first Mensflair post, founders James Shaw and Alistair Rae are what I class as enthusiasts/designers.  Started just three years ago, these guys really do encompass the best of modern Britain; taking history and heritage as their cue, they subtly reinterpret designs for a new audience, thereby producing garments that manage to be both classic and contemporary. Aside from the painstaking attention to detail, they are sticklers for quality going to inordinate lengths to track down small British manufacturers – which you can read about on their blog.

I haven’t yet met either James Shaw or Alistair Rae, although if I could think of some original questions to ask I would. However, if you want a flavour of the men behind the company then this interview should suffice.

I have a few of their bits now and there is nothing not to like about this retailer.  And while they’ve attracted quite a bit of attention from the mainstream media recently, success hasn’t gone to their heads. The service is excellent, the chap who served me, Jude, is certainly worth a mention. They appear to have a genuine desire to work in the shop possessing an obvious enthusiasm for what they do, and for whom they do it. This translates into friendly, helpful service without attitude or pushiness. For example, when I got home I realised I’d been overcharged for the loafers. But I called the shop, they realised they made a mistake just after I’d left and were in the process of trying to contact my bank to get hold of me. Now that’s service.

London based they have just two shops (the second recently opening in Shoreditch), but for the billion or more of you who don’t live in London they do have an online store.