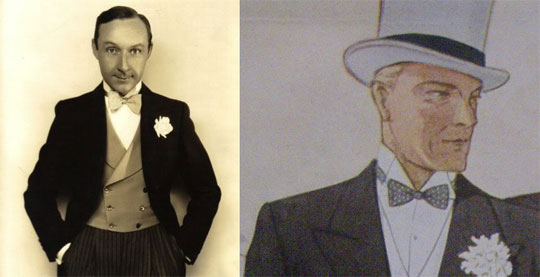 “You’ve written a lot of articles about morning dress!” a friend exclaimed to me recently, as he scrolled through my column on his phone. “Is it your favourite topic or something?”

For reasons unknown, even to me, I do happen to write a great deal about my views on morning dress. For an ensemble that is used by fewer and fewer people on but a handful of occasions throughout the year, my persistence with the subject is certainly disproportionate, but, despite its lack of everyday importance, some of the most serious and earnest enquiries for assistance I have received relate to advice on morning dress. One of the reasons for this is that it is one of the most daunting sartorial prospects in modern menswear; an unfamiliar hotchpotch of historical clothing in which a man determines to look more impressive than usual.

Morning dress neckwear is a conundrum for the sartorially curious. The Moss-Bros-majority set a poor example, settling for the default option of a crumpled pre-tied ‘cravat’ that I call the ‘used napkin.’ Though a contemporary choice, I cannot advocate using them and find it immensely irritating that the planners of occasions of matrimony worry more about whether the awful thing is exactly the same colour as the balloons in the marquee than whether it is a wearable accessory for the groom and his party.

Neckties, now the Debrett’s default and the only acceptable neckwear for the Royal Enclosure at Ascot, are the other contemporary option. Though decried as ordinary and boring, the tie presents greater accessorising and stylistic possibilities, with precious metal and jewelled pins to add a detail of interest.

The ‘Ascot’ cravat, sadly no longer welcome at the racecourse of its namesake, is becoming ever rarer, despite its historical correctness in classic morning dress. It too presents an opportunity to accessorise with jewellery, though many I have suggested it to consider it too fussy.

Rarer still, in morning dress at least, is the bow tie. Though still relevant to modern wardrobes, the practice of using the bow in morning dress, which even in its heyday was a maverick choice, has almost entirely vanished. Personally, I think this is a great shame.
The bow is not only recherché, it is also perceived to be more formal and individual than the tie and yet, at the same, time more youthful and fun. Whereas the tie reminds many of the mundane working week, the bow is more symbolic of special occasions.

In my mind, the way to wear it is to do it in an ‘old school’ fashion; with a detachable wing (or butterfly wing or Imperial) collar and a plain white cotton tunic. Though a turn-down collar is the modern standard for neckties, it really doesn’t work with the bow in morning dress. It is important that the tunic is semi-stiff as a considerable area of it is seen, as with black tie. Semi-stiff tunics and detachable collars can be bought from Darcy Clothing or Budd in the Piccadilly Arcade. The best option for the waistcoat is double-breasted, as is shown in the left of the picture.

The colour and pattern of the bow tie is also important, although the options are far greater than those available for neckties. The crucial thing is that the bow tie needs to be subtly patterned and that the colouring needs to be, for smartness sake, fairly dark; bow ties are fun, but lime green wavy stripes is rather too much fun for sober and serious occasions.