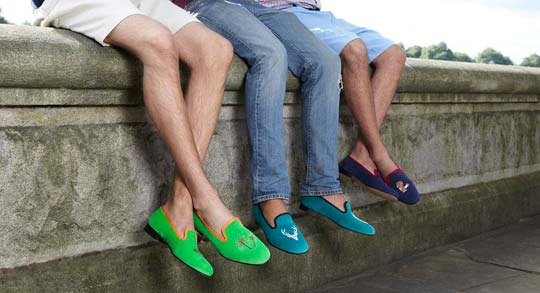 “What the hell are those?!” my friend exclaimed in great animation. His arm was thrust out, his finger extended – like a great explorer pointing to distant lands – towards the feet of a stylishly dressed man who was leaning against the wall, mumbling into an iPhone. Long-haired, wearing a bright blue blazer with rolled-up cuffs, tagliatelle of leather bracelets, a patterned linen scarf and white jeans – on his feet he was wearing monogrammed Albert slippers; and no, it wasn’t Lapo Elkann.

“Slippers?!” my friend spluttered in disgust “outside?! On the street?!” My friend was beside himself. It was as if we had just witnessed an act of the gravest depravity. After all, wearing slippers out of doors isn’t exactly endemic. You don’t see the general populous wandering into restaurants and propping up the bars wearing fluffy bunnies; when it does happen, usually in the dead of night at some 24 hour supermarket, it is usually because the wearer has not bothered to dress.

However, Albert slippers aren’t like fluffy bunny slippers. They have a shoe’s construction and leather soles. They aren’t backless or sideless and were it not for fact that they are sold as indoor footwear, they might as well be loafers, mightn’t they?

Others disagree. “Slippers are slippers, to be worn indoors.” However, this isn’t simply about not traipsing the grime and dirt of the streets – “the tramps’ pee” as my girlfriend calls it – through your own house. To them, even if you buy a pair of velvet Albert slippers exclusively to wear out of doors, this is heinously inappropriate. “There’s all sorts of things that gentlemen have been told to do and not to do since the days of Brummell” said one “no brown in town and the like, and some of these rules just aren’t relevant anymore. But wearing slippers out of doors is always a no-no.”

They aren’t very practical. Rain is always an enemy of shoes, and leather Oxfords are bad enough but wearing velvet Albert slippers in the rain is like wearing a pair of prawn sandwiches. This is perhaps why the Elkannites who favour them only bring them out in the summer time; enabling them to swan about, skipping past the splats of ice-cream and point a delicate, velvet-covered toe as they sip Chablis on a sun-soaked terrace.

“That is ridiculous” another acquaintance said when I showed him an example “it looks utterly pretentious, as if you’re some kind of 18th century court fop.” However for others, that is precisely the appeal. “It looks pretty comfortable to me” said another “and as long as you don’t wear them on your bedroom carpet, I don’t see the problem. They look better than chunky loafers.”

I understand the frustrations of those who admire the design of the Albert slipper and feel that it should be shown to the world, not tucked under the bed but I feel that it is very much a slipper, an indoor shoe. I own a pair and consider them both immensely comfortable and sufficiently structured for my taste; I would never receive guests in anything less. However, the idea of popping on a pair for a trip to the pub is simply anathema to me. The reason, I believe, is that for me they have such a strong connection with the dressing gown and the fireside. If you are one who, at home,  favours the Grecian, a soft moccasin or nothing at all, the Albert might be more of an option – as long as you can stand the pointing fingers and half-disguised stares.