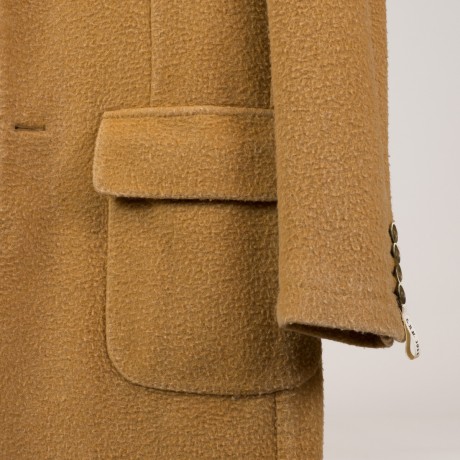 “Jesus. His coat has seen better days” a colleague murmured as we were flicking through some of the best captures of the biannual peacock-fest that is PittiUomo. It was somewhat inevitable coming from someone who hadn’t yet managed to stretch their sartorial imagination beyond multi-deal Jermyn Street shirts, Barbour paddock jackets and suits from Marks & Spencer.

Their idea of texture is, understandably, confined to silk twills, smooth Super 100s wools and Oxford-cloth cotton. Whilst harsh to call it pedestrian, it is rather wedded to the conventional. And so the distinctive Casentino fabric, with its curious similarity to pilled wool – which afflicts jumpers, cardigans and other woollen wearas a result of friction – is undoubtedly strange. After all, why would you want a coat that looks like it has been someone’s favourite for one decade too many.

“Some new-fangled trendy thing” the colleague surmised, folding his arms and shaking his head.

Not a bit of it. Casentino is an ancient fabric. Long renowned for being strong and warm, it has been used in making blankets for animals and for clothing cold Franciscan friars since the Middle Ages. It then moved from mere practicality to aesthetic heights when it became desirable for its distinctive ‘curls’ in the 19th century, counting amongst its famous wearers the composers Giuseppe Verdi and Giacomo Puccini.

One of the more well-known examples of the Casentino coat is Audrey Hepburn as Holly Golightly in Breakfast At Tiffany’s wearing a double-breasted Hubert de Givenchyorange version (orange being the signature colour of Casentino). It is this mid-century aesthetic that has endured; with sparkling heels, gleaming sunglasses and a fur hat in supporting roles, lifting the Casentino to the giddy heights of chic Hollywood glamour.

More recently, it has been seen on the many dandies prowling around PittiUomo every January; an appropriate environment given the material’s connection with Florence and Tuscany. After all, Casentino is named after a valley area to the east of that great Renaissance city.

And, like most PittiUomo trends, the skilful execution of such fashion can persuade admirers to action.

“I really want a Casentino coat!” men have been gushing online, with the unlikely gusto normally associated with boyhood dreams like driving a Ferrari or sleeping with a supermodel.

However, others struggle to see any appeal in the fabric, reacting to its distinctive texture in much the same way that the Prince of Wales responds to modernist architecture: why would something be made intentionally ugly and then considered uniquely beautiful? “It looks like my granny’s bath mat!” another colleague exclaimed “There’s no way anyone can pull this off, unless they’re a model.”

I sit on the friendly side of the fence. Yes, it’s another Pitti-led fad and a Casentino coat is hardly the first entry in a capsule collection. However, worn in the right way and the right context, it moves the coat to the forefront of the ensemble, without extravagant patterns or embellishments.

In my view, the key elements are colour and texture contrast – with a dash of playfulness.

Typically, overcoats worn are in navy, dark grey and black. These overcoats are serious and sensible; funeral fodder. Casentino coats are all about the texture, which is playful and curious, and there is no better way of showing off the distinctive curls than wearing brighter colours; the shadowing created by the curls shows up better in colours with greater contrast ranges. You can go for the distinctive Hermes orange or the similarly classic bright green, but they also look good in royal blue, burgundy, rust and purple. Mustard yellow is an interesting idea, and even a very light grey could work. The key is not to think too sensibly or practically; light grey, for example, is a flexible and not outrageous colour, but is arguably very impractical for outerwear, which means it can work with Casentino.

As a texture showpiece, Casentino needs an appropriate set. Contrasting textures are required to offset its appearance, so layer over smoother textures such as fine worsted and flannel. It’s quite a casual coat, so is also perfect for combining with weekend cashmere rollnecks. It seems to work best with patterns underneath, emphasising its playful edge.