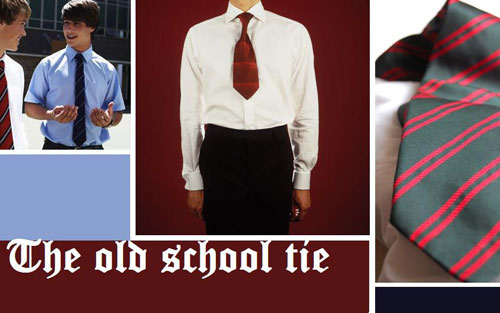 I remember my school days fondly. They were glowing, comforting halcyon days; the echo of laughter along the parquet corridors, the buzz of excitement at the end of term, the sun drenched summer days on the playing fields and the cool, dewy November fire drill mornings. Memory, however, is undoubtedly selective. Less clear are the hazy memories of romantic disappointments, feelings of insecurity and unpopularity, moments of alienation and punishment – the solitary hours of reflection and idleness.

The other fantasies of such nostalgic hypocrisy were the turgid beliefs of self-assurance, creativity and individuality; in particular, in the matter of uniform, my popular illusion that I was more artistically responsible, more aesthetic, in my manner of wear than all my classmates. A little browsing of photograph albums corrects these laughable assertions. The most that can be said for me, an awkward and rather gaunt teenager, was that I wore clean shirts and could tie a tie.

This last triumph of mine, my now ubiquitous four-in-hand, may well be something of a collector’s item in years to come. Clip-on ties, absolutely appalling mock ups of a made tie, are gradually replacing hand-knotted ties in UK schools. The Schoolwear Association claimed that 10 schools a week are switching from hand tied ties to clip-ons because of “fears of ties getting caught in equipment or strangling pupils.”

I’m not quite sure what has changed in schools, but its clear the days of the five minute education on tucking ties into shirts when working in the science and technology labs, are over. I never experienced an attempted ‘strangulation’ with one of our regulation ties, and I am glad for it, but I do think that worrying about such a sad fatality says more about the loss of control over school children than the supposed health and safety risks of a tie one ties oneself.

The other more intriguing, certainly more convincing reason cited is that a ready made tie, mocked up in a very conventional way, will prevent pupils from customising the size of the knots in their ties. For years now, rebellion in schools has taken many forms; swearing, chewing gum in class, teacher abuse, hair that defies regulation and, particularly, uniform alteration.

When I first attended school I was shown a picture – then about 10 years old – of some pupils at my school in the uniform I was to buy. “This is how” the school outfitter muttered “your school wishes you to dress.” I was never a rebellious type and looking at the photo, rather disinterestedly, I acquiesced with a blink and a blank expression. There must have been those, however, who on seeing the well-cut suit, tightly tied tie and clean white shirts ignited what I refer to as ‘graffiti thoughts’; the willingness to rebel, no matter that such rebellion makes worse what was first there.

The strange thing about this plan of action is that the Schoolwear Association sees no issue of rebellion in the issuing of a tie meant to counteract the very thing that pupils collectively cherish; creativity. As far as aesthetics go, the awfulness of the fat knot and short tail is without question but at least, in manufacturing such stylistic rebellion, the pupil is able to tie a tie.

Although school uniform is a great social leveller, the hypocrisy of a clip-on tie is the schools attempt to keep pupils on an equal footing by collectively removing from them the opportunity to wear a proper tie; how could they ever feel they belong in the darkest corridor, or on the coldest, frostiest winter run if the school deems they don’t even belong in a tie? For a clip-on tie, is not a tie; it is an oxymoron. The world of clip-on takes education and development away from the child. It places before the child arguments for soulless homogeny, a denial of an opportunity for expression. By all means, discourage the child from the fat knots and short tails worn by the protagonists of the teen dramas, but educate in doing so.

Looking smart can, and should, be in the interests of all. The resources are there for everyone to wear clean, well-fitting clothing to school – the real failure is not the necktie but the hold that we have lost over the younger generation; to clip on a tie is to throw in the towel.