The Sad Demise of Tie Rack 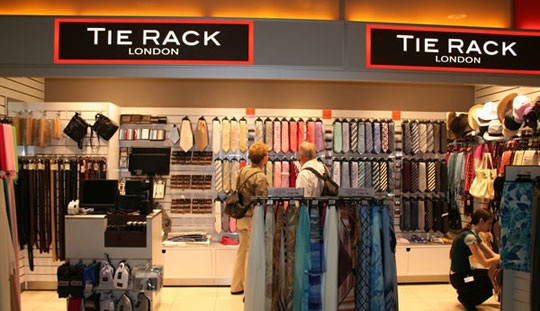 Closing Down Sales can often be misleading marketing ploys. Canny shop-owners combine price reductions with supply-ceasing, which they sum up in the yard-sale informality: “Everything Must Go.” Gullible shoppers, mysteriously eager to respond to such commands, comply dutifully. The sale period ended, the shop owners return to their normal pricing structure and carry on as usual; no bailiffs, no bulldozers and no bankruptcy. “It’s all part” they cackle “of the business model.” How amusing.

However, in retail, there is nothing sadder than a genuine ‘Closing Down Sale.’ To see the uncertainty on the face of staff, the stock thrown around and trampled upon carelessly by ravenous bargain-hunters and the pride of a brand wounded by the exhibition of its downfall.  And so, it was with great sadness that I stepped into the Oxford Street branch of Tie Rack, the international accessories brand, which had recently announced, due to years of losses, that it would be closing doors on UK retail at the end of 2013.

In truth, I had never seen it busier. Either the ‘Closing Down Sale’ marketing had worked its wonders or the newswire had led savvy vultures to prey on the carcass of the once 450-branch-strong neckwear brand.

The ties were there of course, heaps of them lining one side, alongside pocket squares, bow ties, cufflinks and belts. But the thing that struck me was how quiet that area of the store was. I scanned the environment and noticed that the area of greatest interest was women’s accessories; scarves, wallets, hats and gloves. Women of all ages were rifling through bins of silk scarves, holding up belts in front of their bored husbands and trying on hats in a crowded mirror.

It is well acknowledged that the wearing of ties is on the decline. When I was on work experience in a fund management office in the late 1990s, ties were expected to be worn every day – by everyone. Nowadays, many offices no longer require them to be worn at all, unless there happens to be an important external meeting or a presentation, which encourages men to own fewer ties and be more discerning when it comes to purchasing one. This explains why the pile-em-high-price-em-low Tie Rack offer no longer works.

It also explained why so many men in the store, when such bargains were on offer, chose to peruse the women’s accessories. So alien were these ties to them that, in their studied avoidance, pretended to be interested in floral gloves, pink striped scarves and metal-fruit covered yellow belts.

I, a loyal customer of Tie Rack, was crestfallen. The quantities of silk that had gone to waste; the hours of design ignored by an unappreciative public. Though neckties had become less than 50% of the stores’ revenues, they were its raison d’etre, its necessity. They had given birth to the brand’s success.

It is perhaps appropriate that if the ties go, everything else should too. For gone are the days when the Everyman needed such variety of neckwear (and could purchase it at low cost); past is the time when men looked at a tie as a sartorial plaything and whim of pattern and colour. Now, they are but nooses of an imprisoning formality and a millstone around the neck of a once-great retailer, caught cold by changing trends.