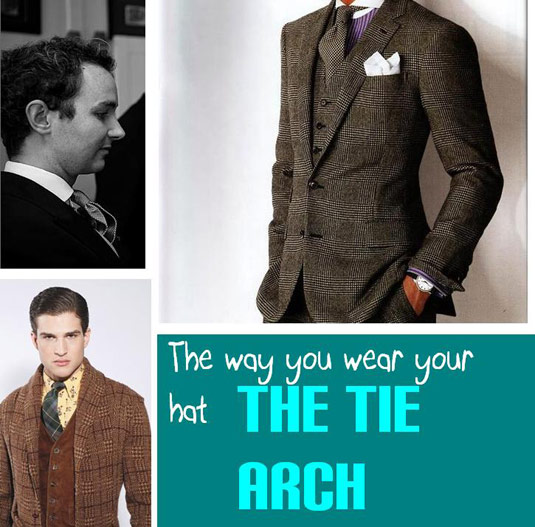 Rumours of the necktie’s death have been greatly exaggerated. Countless predictions of men binning their strips of silk have proven to be inaccurate. When ‘smart dress’ is required, the tie is the first weapon called from the armoury.

However, I encounter more and more people who possess handfuls of ties but who profess to be inadequate in tying them properly. A recent conversation with an acquaintance about my preferred method of tying ties led to confusion over certain terms, the most baffling of which seemed to be my use of the term ‘tie arch.’

“What the bloody hell is a tie arch?” was the response. Quite simply, it’s an invented term used to describe a portion of a tie which has been affixed to the wearer so as to allow the top of the tie to ‘arch’ out from the shirt. Unlike a tie which is worn without an arch which kisses the entire shirt placket from collar to hem, the ‘arched tie’ juts out from the collar at an angle and, in order to create the arch, the tie is secured to the shirt by a pin or clip further down the shirt placket.

It is a technique most often deployed when a waistcoat is worn. Without fixing the tie to the placket, it tends to stray from its intended position and so a clip is worn, either visible or not, to ensure it remains in place. The arched tie was more commonly seen when tab-collars were in fashion; the tab would prevent the top of the tie from falling to the placket and would create an attractive ‘arched profile.’ Ralph Lauren’s Polo look books are chock full of arched ties.

With a tab or bar collar, it is possible to create a little arching without using a pin or clip to secure the tie but a normal collar requires such assistance. To create the most attractive tie arches, tie a standard four-in-hand snugly and make sure the tie is pushed up inside the collar; this will affect the position of a tie as worn with a tab or bar collar i.e. at the top, not the bottom, of the collar. 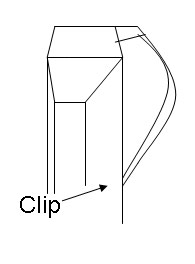 Next, take a tie-clip or pin to secure the tie to the placket and insert it at a point that creates a satisfactory arching or, if you prefer, ‘ruffling’ of the fabric. The diagram on the right illustrates how this is done.

The look is best achieved with waistcoats because without, an arched tie secured to the upper half of the shirt tends to look like a hosepipe with a kink.