The Way You Wear Your Hat 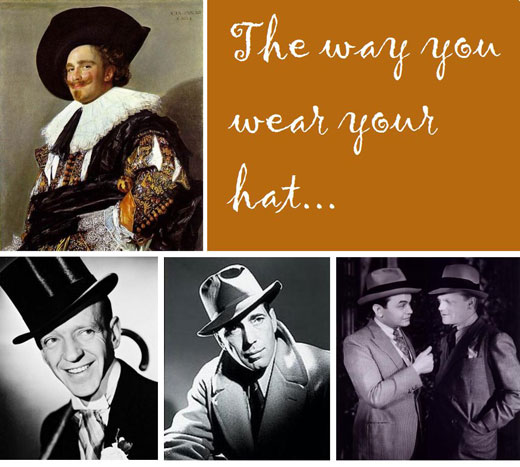 We all know the lyrics conjured by Ira Gershwin, famously touching upon that aspect of headgear so often overlooked; the way a hat is worn. So out of touch are we with the practice of wearing a hat that many gentlemen forget that there is as much art in putting a hat on as there is in manufacturing it. During the time when everyone wore headgear, the man who stood out from the crowd generally wore a hat that was not only of the highest quality but also of the most individual and flattering aesthetic. Gentlemen reading these words may perceive this concern to be small beer; after all, how difficult can it be to wear a hat well?

If the few men who march around in fedoras and trilbies are anything to go by, it appears to be a problem for the majority. The assumption, it seems to me, is that a hat should do all the work. Some men merely plonk a hat on their head expecting a Bogart visage to appear in the looking-glass; hand-hat-head-front door seems to be the sequence in their minds. Unfortunately, a little more effort is required to achieve the best effect from an item of headgear. And this consideration of how a hat will appear should always be addressed at the milliners.

The way some gentlemen wear their trilbies, you’d think they’d bought their hat from a blind man and dressed in the dark; the brim is often flat, shapeless and dull, the profile utterly unremarkable. Their mistake is in believing that, merely by having a piece of felt on their heads, they are a pure example of bygone elegance. The shame of it is that if they’d paid more attention to the mirror at the milliners, they wouldn’t be in this situation.

When I try a hat on, I do so not only for size but for aesthetics; hats rarely look the same on two people, so a sensible amount of posing (and possibly a tasteful shopping partner) to determine whether a prospective item of headgear looks ‘right’ on a gentleman is vital. Wandering out into St James muttering to yourself that you simply ‘must have a Homburg’ at all costs is misguided; the Homburg looks a fright on certain people (those of narrower shoulder and shorter frames). Hats must be chosen and scrutinised with the utmost humility. The next thing you must do when you have found a flattering design that suits your face and build is to put it on correctly.

The aforementioned correctness isn’t to do with a dusty old rule, nor the dictat of some style sage but simply to do with the way the object appears; I wear driving and Gatsby caps a little to the side but I vary how much of my forehead I reveal depending on style. I think a slightly downward pointing peak on a flat cap looks more rakishly metropolitan, whereas a more upward pointing peak on a Gatsby, accompanied with a smile looks easy-going and bucolic – echoing a setting sun across a golden meadow. As minute as some might think these differences are out of context, in an outfit they can make all the difference.

If you watch certain film noir, there are characters who have a style of wearing trilbies and fedoras that is seen little nowadays; some fedoras are pushed back on the head with the brim pulled down over the eyes; some trilbies are worn jauntily, a la Mr Sinatra, revealing more of one side of the face than another; a few pinched hats are snap-brimmed with the characteristic flick up at the back brim and the downward pointing front brim. Rarely, in such pictures, are they worn without any consideration for the aesthetic of wearing a hat. For a hat, properly worn, is not an object merely to be secured to the temple, parallel to the brow; it is as much a stylistic expression as a stuffed pocket square, four-in-hand or a Club collar. When you try a hat on, be bold – express, be theatrical, try to frame yourself with the item; wearing a hat properly, as Frans Hals understood, is worthy of art.