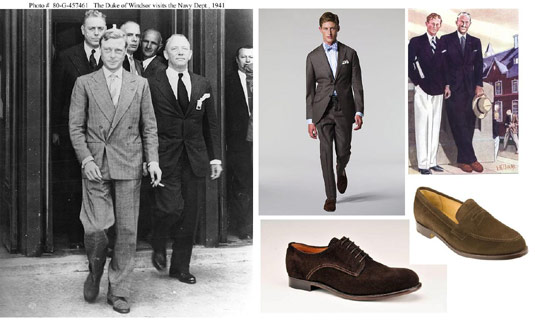 There is a long tradition in England of men wearing brown suede shoes with suits, in particular blue shirts.

In fact my first encounter with the look came as a young shop assistant when a wonderfully irreverent and sprightly old Cavalry Colonel came in to buy a black umbrella. There was to be a parade of veterans that day in front of the regiments Honorary Colonel, Princess Ann; and “the General” had ordered him to buy one. After parading up and down the shop a few times to get the feel of his new brolly he departed a happy man.

Ever since that encounter brown suede shoes with blue suits have been a staple look in my inventory, and I’m far from alone.

The most notable advocates were of course the Duke of Windsor and later Carry Grant. But as I highlighted in my post about Terry Thomas, they became a signature of his dress also. Thomas took his inspiration from actor Sir Gerald du Maurier who was popular in the twenties and early thirties, before his life was cut short by colon cancer in 1934.

But just where it started is a mystery and one I’ve been trying to solve for some time. The Duke of Windsor is often given the credit for making brown suede and suiting popular, but the look, as with wearing military stripe ties, predates the man himself.

I’m far from there, but it seems it may not be the acting fraternity or Royalty we have to thank, but the British Army.

Referring back to our retired Colonel, you might think that such a man on such an occasion would have worn black oxfords. But historically it has been the practise within the British Army that officers wore brown shoes and boots while enlisted men wore black. And it may be that this differentiation of class and rank has its part to play. Of course this doesn’t entirely explain the use of suede.

The House of Common has its share of sartorialists. With one in particular I’ve enjoyed many a chat about matter of dress. Patrick Mercer is an MP, former Colonel, successful author and happens to be a member of the suede shoe fraternity. His theory is that during the 1920s and 30s it was popular for British Army Offices loafing around in the Middle East to wear suede dessert boots on and off duty. These were not the ‘Clarks’ desert boots we think of today, but a more formal robust boot. He believes this footwear trend returned with officers to the UK, and this would certainly fit the time frame.

I’m not convinced this is the definitive answer, and so my search continues. But if anyone knows better I’d be delighted to hear your version.