Lapel Gorge: A Question of Proportion

Before I had my first bespoke suit made, I seldom considered the implications of the placing and shape of the gorge of the lapel on a tailored jacket, and how it can affect the appearance of the wearer’s physique in a number of different ways, or even act as a fashion-statement in its own right.

For those who are unfamiliar with the concept, the lapel gorge is the technical term for the part of the suit where the body of the lapel is attached to the collar of the jacket. The shape of the gorge will obviously change in relation to the shape and proportions of the lapel itself.

There are two things to think about in relation to lapel gorge. One, what suits your body? And two, what are the ways that exploiting different lapel gorge shapes can impact upon the aesthetic portrayed. Consider the two peaked lapels below. Both lapels are peaked, and both are 4.25 inches wide at their broadest point. They were cut for me by The Cad & the Dandy but despite these similarities, they are very different in shape. 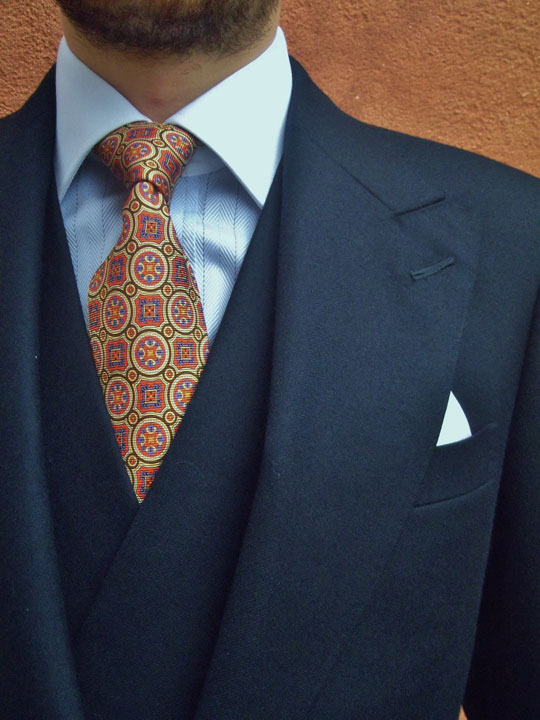 The first is from my blue flannel lounge suit. This lapel, although larger than many of the lapels found on most off-the-peg suits, is cut in a relatively modern style. It has a strong sweeping curved shape, helping the lapel to sit around the chest, and the gorge itself is a strong ‘v’ shape; the body of the lapel meets the collar on an angle that slopes downward, before the actual protruding peak of the lapel strikes sharply upwards in the aforementioned ‘v’ shape. Furthermore, this jacket has been cut with a high gorge – 2.5 inches from the top of the shoulder – which also contributes to a modern feel. A mediumto high gorge is the most common and conventional style for most modern tailoring. It suits the vast majority of body-shapes, without becoming problematic or awkward.

Often, the more fashion-forward menswear companies such as Reiss and Duchamp cut notched lapels with a particularly high gorge, so that the lapel breaks high on the chest. This is when the gorge can start to become more of a fashion statement, as this has the effect of visually bulking-out the chest of the wearer with the lapel, and often compliments a slightly shorter, heavily fitted jacket that again, is the current fashion. 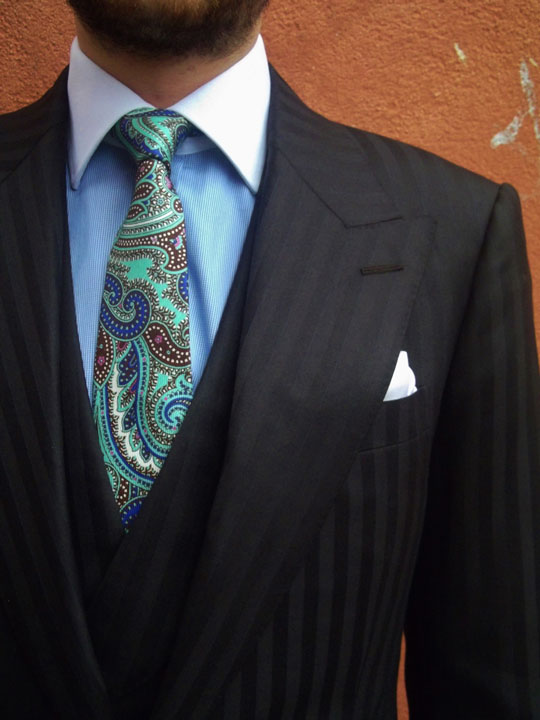 This is the second, from my most recent suit cut by the Cad & the Dandy, the chocolate cocktail suit. As you can see, the lapel is cut in a different shape, with less curvature around the chest and sits lower on the chest with a significantly lower gorge and less of a ‘v’ shape to the peak of the lapel. This gorge is cut 4 inches from the top of the shoulder. The reasons for this are deliberate, a lower gorge on a large lapel has the effect of accentuating the lapel’s already imposing appearance, making a more flamboyant statement, expected of cocktail or party suits. The lower cut gorge also adds a classical quality to the lapel. Follows of my own blog will be aware that I like 1920s and 30s inspired tailoring and in the 30s when peaked lapels came in, they were cut in this way; with a large shape, a horizontal peak, and a low gorge. Having a lapel such as this on my own suit, adds an art-deco quality to the tailoring that I enjoy infusing into my clothes.

So there you have it, lapel gorges are interesting things to think about, and often overlooked – but perhaps next time you go shopping for a jacket, you’ll have the opportunity to experiment a little more with the nature of your lapels. It can change the whole nature of your jacket’s shape, and this may well influence your appearance a little more than you’d imagine!