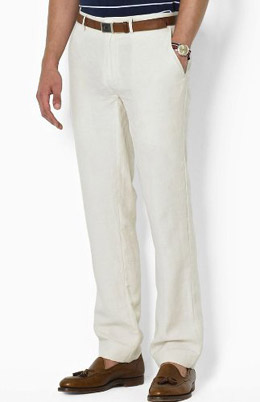 One of the problems I face with summer dressing is finding a suitable drapey replacement for flannel and worsted trousers. I personally like my trousers with a nice drape, especially since because I have a more prominent posterior, trousers that hang rather than hug are both more flattering and more comfortable. Enter the linen trouser.

Chinos, while suitable to my being American, and great for just kicking around, lack that smooth line I so enjoy. By allowing the trouser to drape naturally off your backside, you get a clean, long line with no lumps or bumps, elongating your legs and giving you a streamlined silhouette. Contrary to popular belief, tighter trousers are not always slimming trousers.

To get technical for a moment, real linen is made from flax which is anywhere from two to four times as strong as cotton fibers, as well as being much better at conducting heat (and thus cooler to wear). It’s also extremely absorbent and acts almost like one of those high-tech wicking materials, pulling moisture and sweat away from your skin, cooling the wet fabric as you move, and in turn cooling you as the cool fabric touches your skin again. 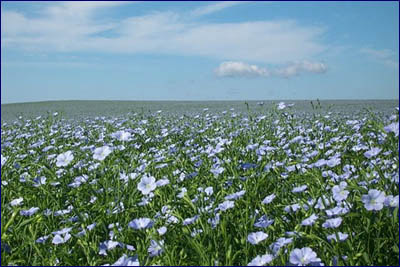 Irish and Flemish linen are usually considered to be the best quality, but flax is being grown now all over the world, and some companies are even trying to weave cotton similarly to linen in order to achieve the same results. Linen is also one of the world’s oldest cloths, and this is yet another case where I’ll stand on the side of tradition.

Well, technical details aside, the thing that really sets linen apart is its wrinkles. Back in the States, ironing would be necessary between most wears, whether trousers, a linen shirt, or a jacket. And don’t get me wrong, I love a crisp crease in my trousers most of the time, although with linen this can be all but hopeless after the first hour of the day. But here in the UK, I think they’ve got it right. The lightly rumpled, imperfect, and pleasantly lived in look of non-freshly ironed linen seems much more summery to me, not to mention that it cuts my ironing time in half.