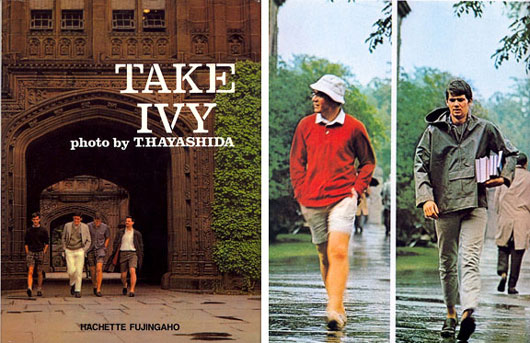 The “Ivy League Look” is experiencing a huge revival right now, much to my excitement,  but ironically enough, it is mostly missing the college campus. As a student at an Ivy-esque school (top fifteen, mid-sized private school with a “We’re as good as Harvard” complex), I am shocked most days when I venture onto campus for class. The number of people who look like they have either just come from the gym or rolled out of bed with no time to put actual trousers or jeans on is staggering…and somehow it never ceases to amaze me. Wearing a tie usually gets me asked “Oh, do you have a presentation today?” or the occasional “I didn’t know you work at the law school?” When did the campus change from go-to-hell heaven to a pit-stained purgatory?

Now, not everyone falls into this category, and there are still quite a few more well dressed people on campus than off. Most of the people I see consistently well put together in fact are professors. It’s a bit stereotypical and cliche, I’ll admit, but there is something wonderful about walking into English class and wondering where the professor got his tweeds. There is a professor in particular I am thinking of who exudes the aura of “Professorhood” from his pink button downs to chestnut long-wing brogues, and does so completely unselfconsciously. In fact, he would I’m sure be amused and a tad embarrassed if I told him he was being written about.

Even with its more unusual variations, the “Professor” look is unmistakable – almost always a tweed coat, corduroy, moleskin, or flannel trousers as the weather permits (and linen in the summer), foulard, knit, or paisley ties, always loafers or brogues, and the inevitable plethora of oxford cloth button down shirts. Although many of my peers would judge this look to be stodgy or boring, I find it to have an invigorating mix of self-control and whimsy. I would never expect to walk into a lecture on Virginia Woolf and find my instructor in pinstripes, but a flamboyant mix of pink, green, yellow, blue, and brown would be nothing out of the ordinary.

While I am certainly glad that the Ivy Look is getting more press than ever (and that the reprinting of Take Ivy is available in a matter of weeks), I would like to see it trickle back down to the campuses themselves. Reading a book on the quad in a colorful sweater, rolled up chinos, and sockless loafers is a great feeling, trust me.