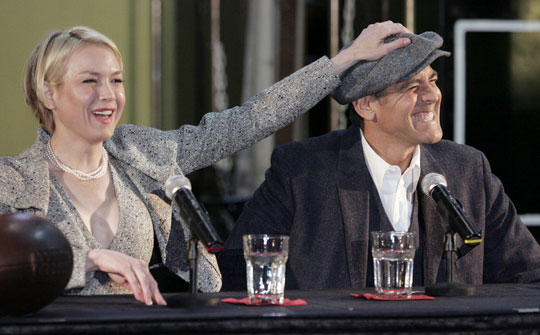 For weeks now, London has been shivering in a kind of blinding Narnia state; snow and biting wind, so unusual to the city, have gripped its citizens. Fixated by the weather, people spend half the office morning talking about the difficulty of their journey in, shaking off Wellington boots and laying damp scarves over radiators. They pontificate on how long the matriarch Mother Nature will subject their world to the wintry freeze.

There is no doubt that ‘inclement’ weather – as the broadcasters insist on referring to it – needs preparation, sartorially-speaking. Footwear is vital, as is layering to avoid coldness. And even the toughest have been seen smirking beneath umbrellas. However, there is one item that some feel even the hardest conditions of winter cannot excuse, one which is still to remain an item of theatrical, even comical value; a proper hat.

Hats aren’t worn enough. I’m not referring to beanies or bobbles, but proper, structured hats. People walk outside and subject their most precious economic asset – their heads – to cold, for the most exasperating reason that hats (fedoras, trilbies and even flat-caps) while practical and sensible on a cold day, ‘just aren’t done any more.’ The biggest obstacle, it seems, is fear of ridicule and it doesn’t matter who wears them, either. You could be exceptionally good-looking, a movie star or a famous age-defying rocker – but, outside of a fawning coterie, people will snigger at your patronage of Bates.

My experience with a woollen ‘baker boy’ cap, an item of headgear lacking the grandeur of a brimmed hat, suggests that the uncertainty about hats in general is compounded by the issue that people aren’t sure what to make of the individual design. The fedoras and trilbies have their detractors, but they rarely provoke extreme reactions. The flat-cap, the ‘farmer’s hat’, is, as one chap put it to me “still the symbol of the rural working man.” The ‘baker boy’, rarely worn and of an unusual design, is, very much, another case of sartorial love/hate.

“It’s a bit…costumey” said a colleague who had chuckled at my snow-day ensemble. “You look like you’re going for a drive in an open-topped 1930s car.” Others were more guarded in their statements, but there were more than a few sniggers. A golfing fan told me I looked like I was about to play a round with Walter Hagen.

I have ceased to be surprised or hurt by the reactions of others. However, I had to find someone – inside or outside of the office – who appreciated my use of this vintage, but scarcely antique, design. “I like flat caps” said one, approaching the issue sympathetically “but…this is a bit too much like the hat worn by the kid who sold papers about the Wall Street crash.”

“It’s cute!” squealed a comment on a blog post questioning a celebrity’s use of the ‘baker boy.’ “Take it off!” another screamed “he looks like Dick Dastardly!” “Nah, I think you’ll find” mused another, smugly “he just looks like a dick.”

‘Quaintness’ has a way of polarising in this manner; it’s either cutesy and cuddly or in poor taste. The ‘baker boy’ is a quaint piece of headgear. Unlike the flat profile of the flat cap, it has a bit of a bridge in the profile and, significantly, it has a wider structure than the head it adorns, resulting in a look that is arguably both charming and juvenile. It isn’t really ‘cool’ – even George Clooney doesn’t look ‘cool’ in it – which tends to put off the more insecure. However, it has a character which means, unlike the beanie, it can actually lift an ensemble of relative formality (suit and tie), instead of relegating it.